As I’m floating on my back in the sparkling shallows of Saint-Honorat, an island off Cannes, surrounded by super-yachts and gin palaces, I swear I can hear the clink of ice in a cocktail shaker.

Sure enough, a couple of minutes later, I spot the perfect silhouette of a martini glass as it is passed from cabin boy to elegant recipient on board the white-sailed yacht closest to me.

There is a flash of pink as she raises the drink to her lips. Cosmopolitan, I think to myself. This is as close as I come to the high life. Saint-Honorat is not a hot spot if you’re a landlubber: it’s a quiet little atoll off the coast of the Riviera and all that is here are vineyards, a tranquil monastery manned by wine-making monks and a simple restaurant.

Glamour on a budget: Susannah Jowitt visits Cannes and reveals: ‘If you’re on a budget like me, you avoid the festivals and high summer and go off-season.’ Above are boats and restaurants on the colourful waterfront

I’ve come by water taxi and am only enjoying the yachts by swimming among them. My own cocktail will have to wait.

As I head back, the glorious esplanade of vast wedding cake hotels hoves into view, showcasing, with a briny sparkle, the bravura of this once tiny fishing port.

Cannes — on France’s south coast, neatly halfway between the much larger towns of Monte Carlo and St Tropez and only a half-hour drive from Nice airport — is of course famous for its springtime film and TV festivals, thronged with stars and 8,000 hangers-on. 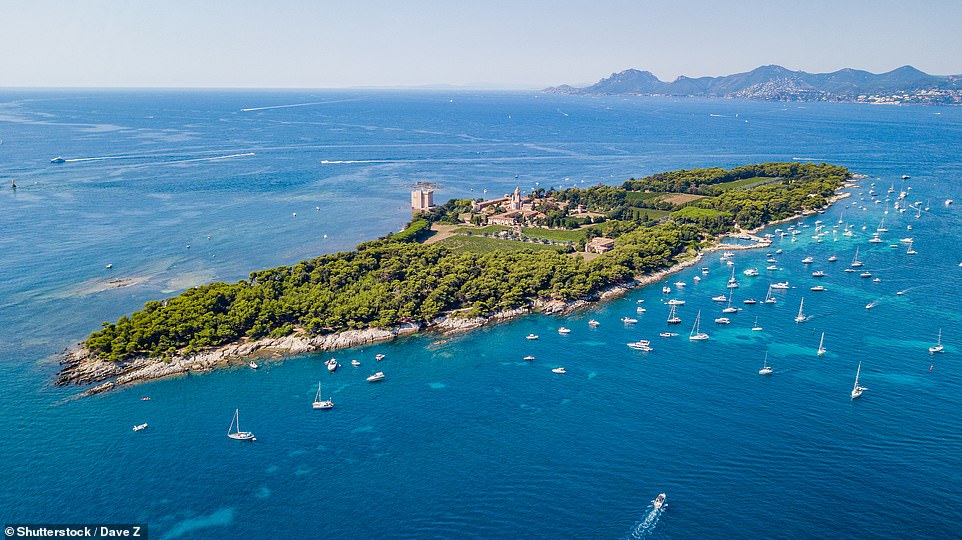 Susannah floats in the sparkling shallows of Saint-Honorat (pictured), a quiet little atoll off the coast of the Riviera that boasts ‘vineyards, a tranquil monastery manned by wine-making monks and a simple restaurant’ 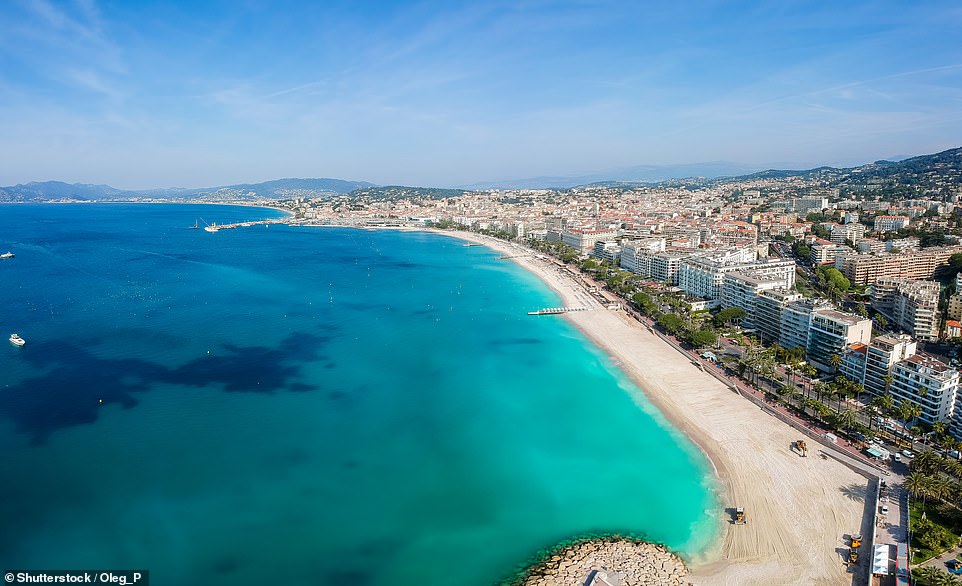 Sun, sea and sand – the ‘key ingredients’ to a glitzy Cannes holiday – ‘are free’, Susannah reveals. Above is the city’s Croisette Beach

But it’s a star in its own right at any time of year. If you’re on a budget like me, you avoid the festivals and high summer and go off-season.

You may not be jostling Tom Cruise in the bar queue but that doesn’t mean you have to lose the glitz. The key ingredients — sun, sea and sand — are free.

I start well by basing myself less than 100 metres from the iconic red carpet at the Hotel Majestic, where room rates out of season are more affordable and the forensic attention to luxury is undiminished: the ‘Fugue a Paris’ perfume wafting in the lobby, the pillow menu, the gold leaf in the cocktails. I already feel like a star. 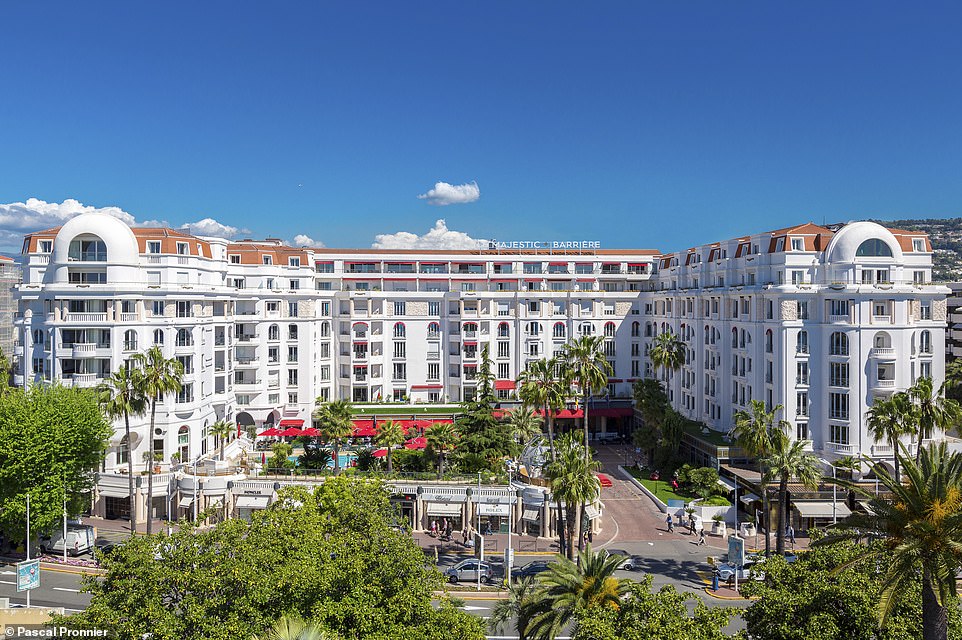 Hotel Majestic (pictured) is Susannah’s base for her trip. ‘Room rates out of season are more affordable,’ she notes 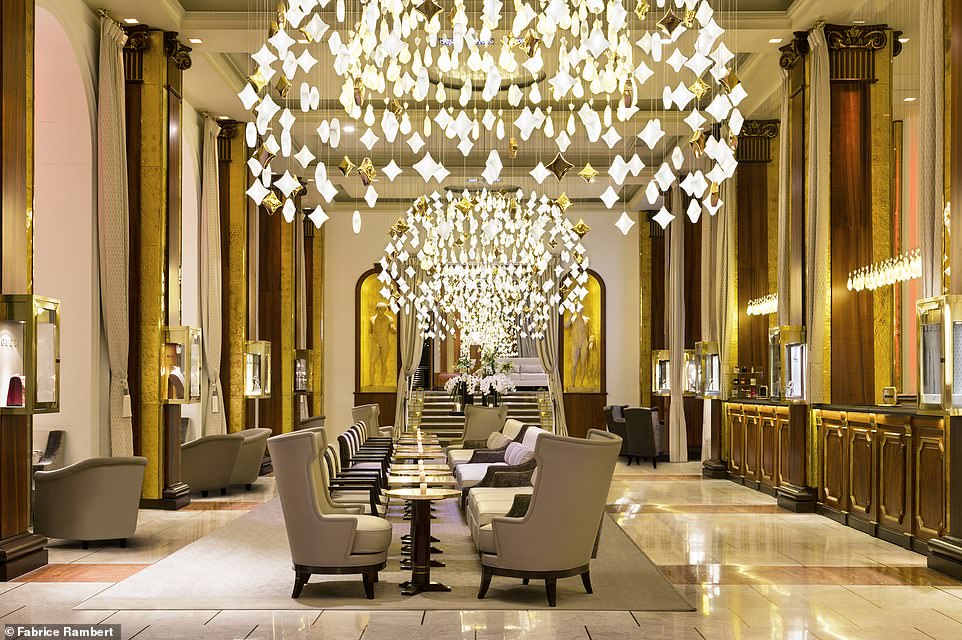 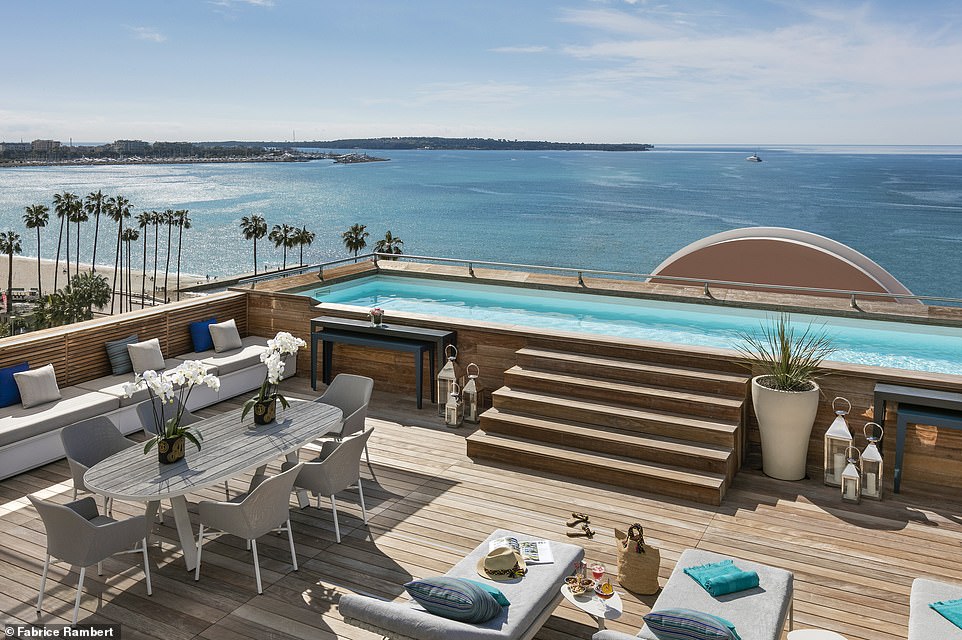 The hotel has hosted celebrities such as French actors Alain Delon and Juliette Binoche and Hollywood’s Marilyn Monroe and  Robert de Niro. Above is the stunning pool area 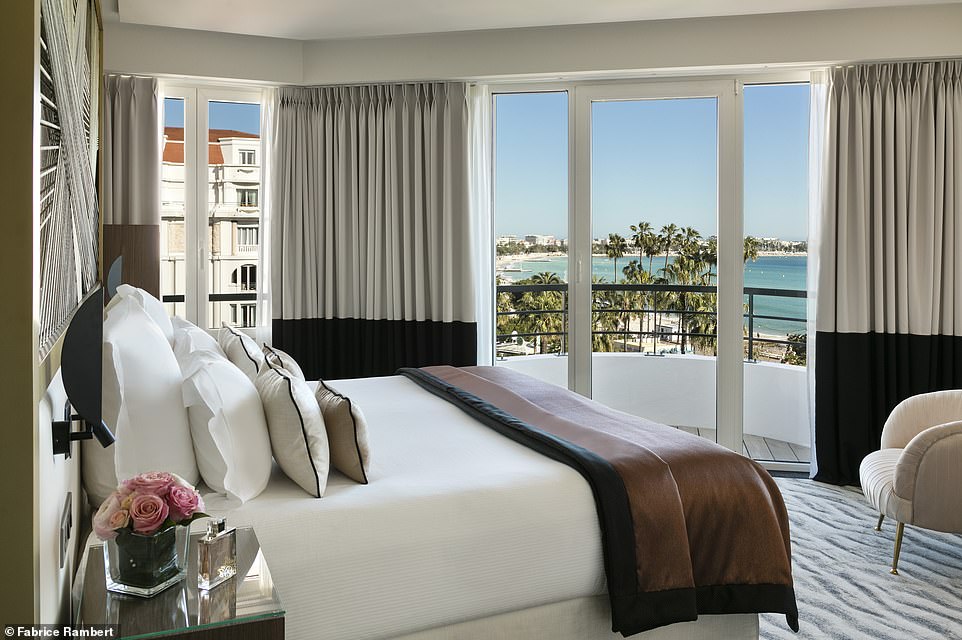 Guests at the Hotel Majestic can select their choice of pillow types from a ‘pillow menu’, Susannah reveals 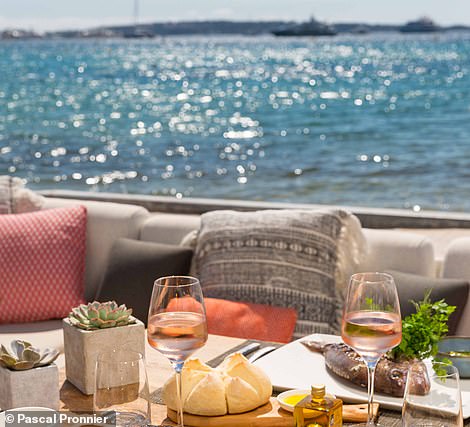 The Majestic has hosted so many celebrities that it barely has the wall space to hold photos of them posing in front of its filigree facade: French superstars such as Alain Delon and Juliette Binoche, and Hollywood hotties past and present including Marilyn Monroe, Mickey Rourke, Robert de Niro, Nicole Kidman and Jamie Foxx.

Lounging on the private beach of the Majestic — €20 for guests, €40 for outsiders — means I get to rub shoulders with the beautiful people at beach bar BFire, with its smokingly cool DJ and fancy (think truffle pizza) beach food.

And so I stroll along the long palm-planted Croisette, with its overload of Gucci, Chanel and Hermes boutiques, and then head for the Rue de la Pompe, a quiet and pretty pedestrian alley behind the main drag. 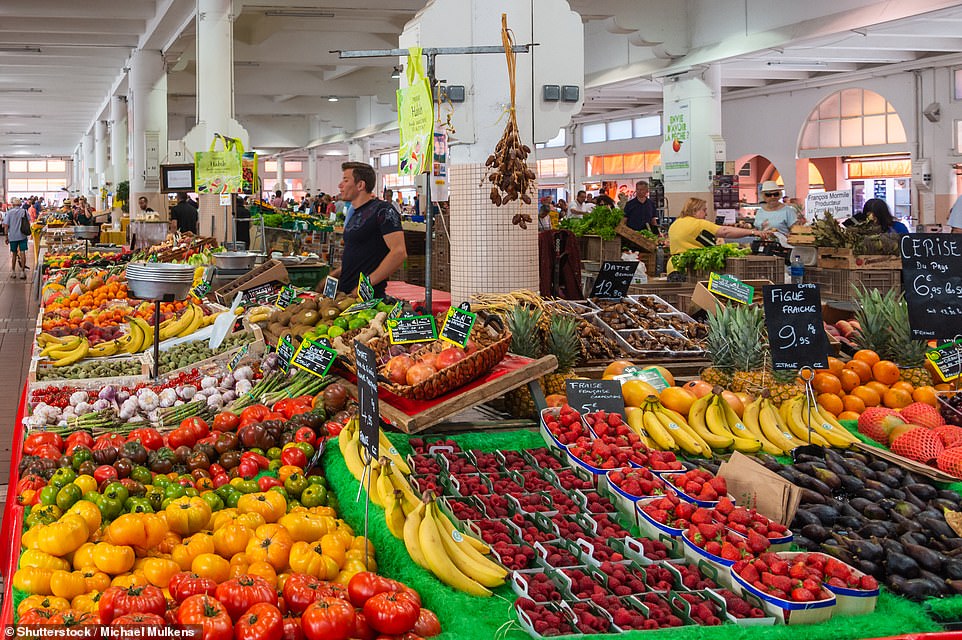 When Susannah arrives at the Forville market (pictured), she’s ‘transported back to before the English aristocracy arrived in the 1850s and began to transform Cannes into a winter sun resort’ 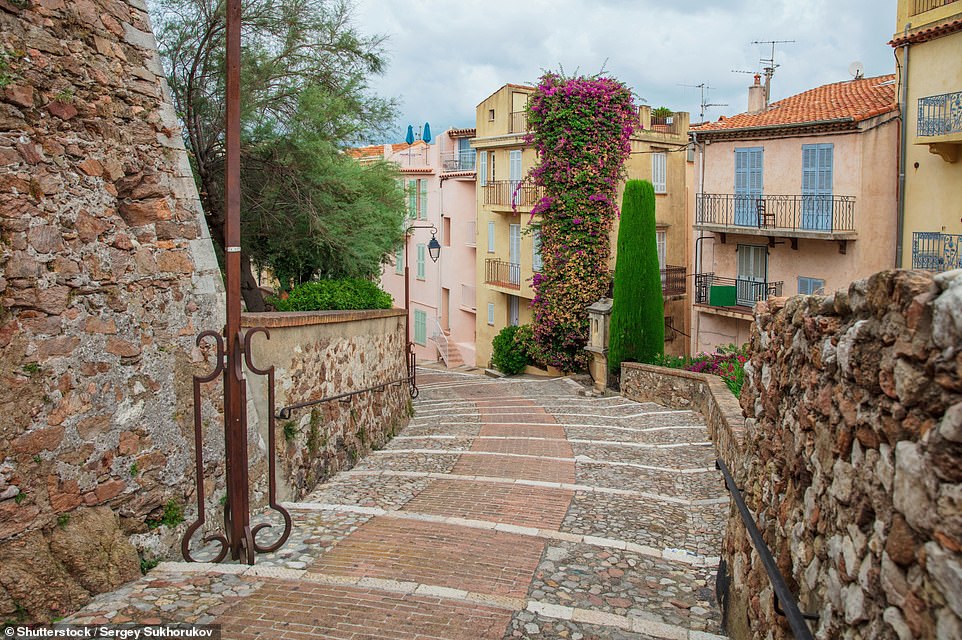 From the end of La Pompe, I turn up to the Forville market and am transported back to before the English aristocracy arrived in the 1850s and began to transform Cannes into a winter sun resort. And before Coco Chanel opened a large boutique here in 1932 and well before the Cannes Film Festival arrived in 1946.

Cannes is the perfect size for walking — even if the film stars take a stretch limo everywhere.

An evening amble up through the winding cobbled streets of the old town, brings me to the hilltop of enchanting Le Suquet, an area with its roots in Roman times, with its magnificent views, medieval castle museum and cosy neighbourhood bars, such as La Sousta offering traditional and Provençal cuisine.

Here, I order the market’s red squid with black ink linguine — and the waiter nods approvingly: ‘This is what Cate Blanchett ate. She was very quiet, just with her husband. We didn’t ask her for a photo, that’s not what we do.’

Suddenly, I feel like a Cannes insider — and it’s a happy feeling.