French police have forcibly cleared a huge Paris migrant camp where more than 2,000 people lived shoulder-to-shoulder in tents under a motorway overpass.

Around 2,400 migrants, most of them young men from the Middle East and Africa, set fire to their camp under the A1 in Saint-Denis in the northern suburbs of Paris last night after police in heavy riot gear arrived.

The nearby metro station was closed for security reasons as officers attempted to control the crowds ahead of the arrival of dozens of buses to remove them this morning.

Police said the operation would ‘guarantee the safety and health of all, especially against COVID-19.’ 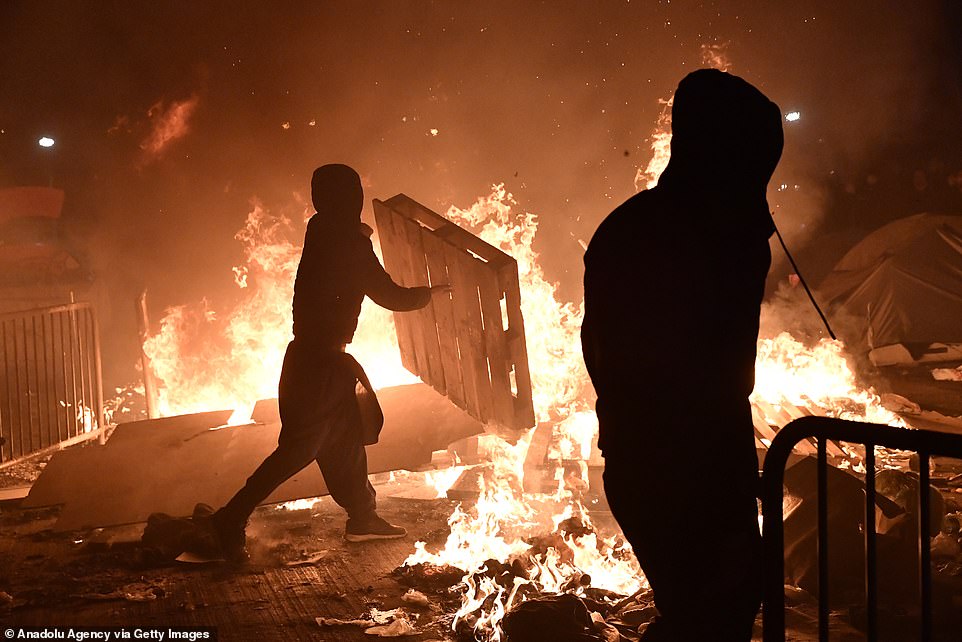 A migrant hurls a wooden pallet onto a burning mass of tents and other belongings as riot police moved in to prepare 2,400 people to be moved away from the underpass in Saint-Denis in the northern suburbs of Paris last night 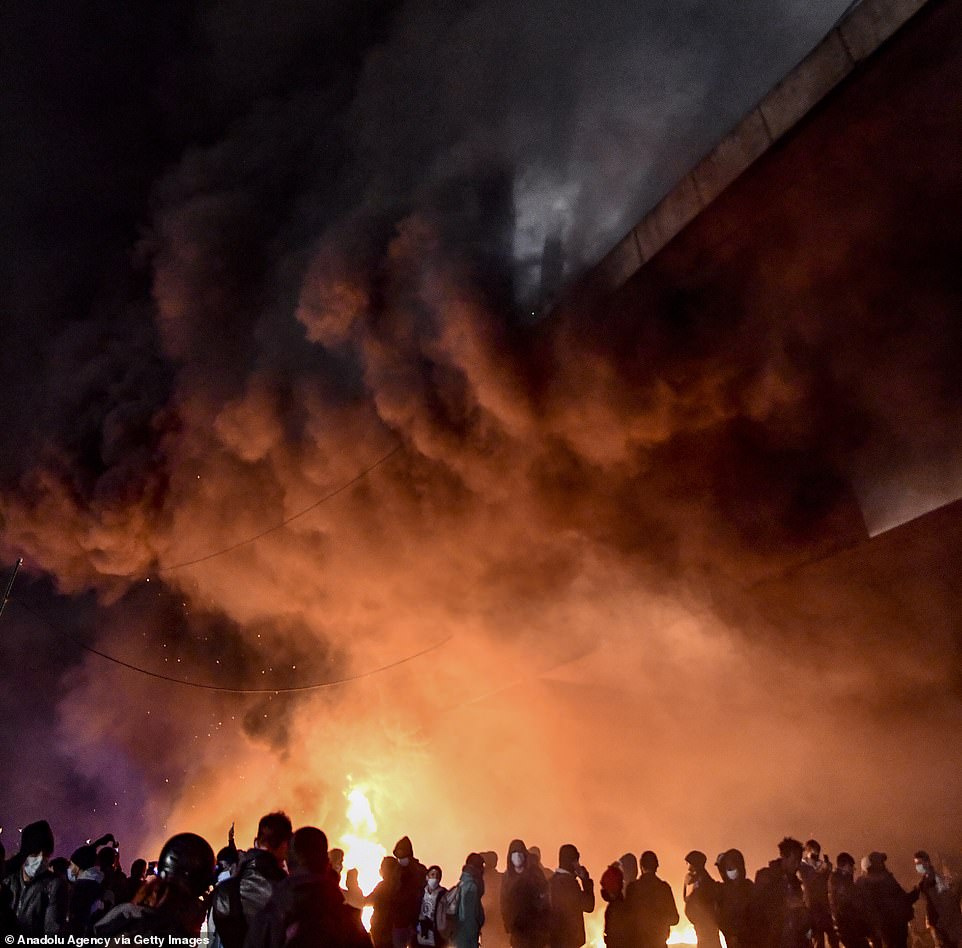 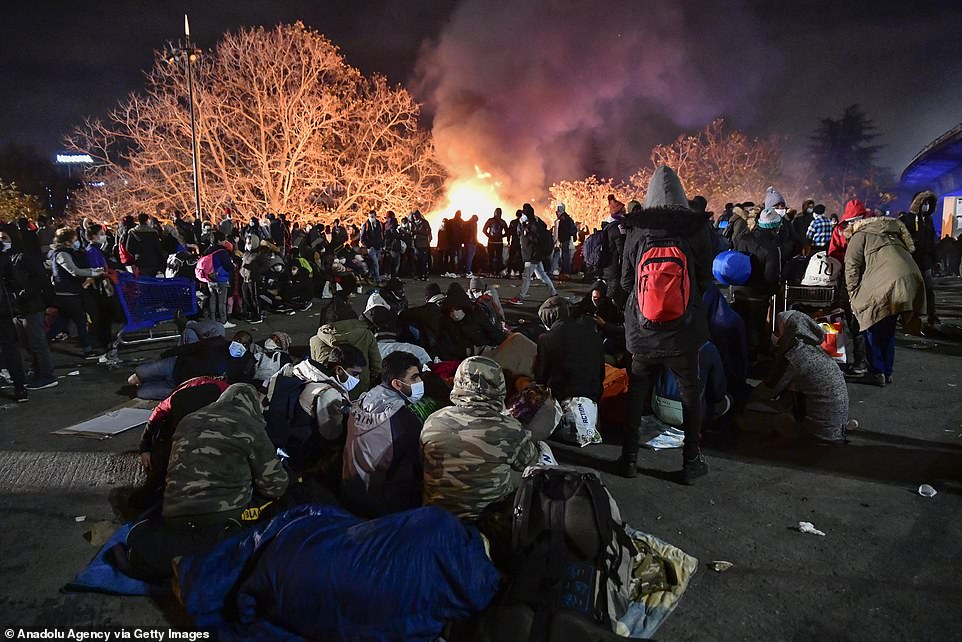 Migrants, most of them young men from the Middle East and Africa, sit on the ground as they wait for buses to arrive at their huge camp in Saint-Denis 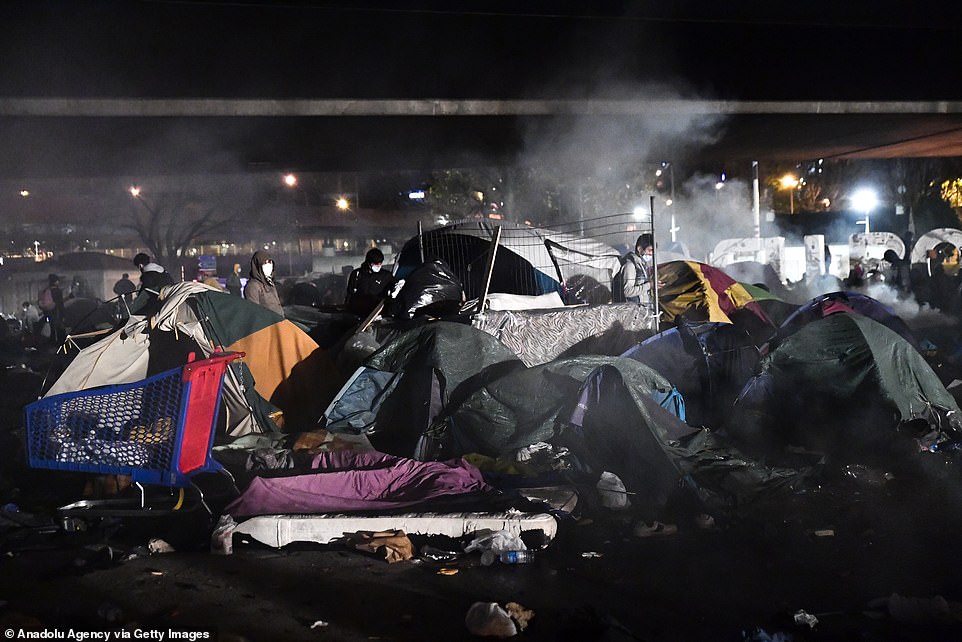 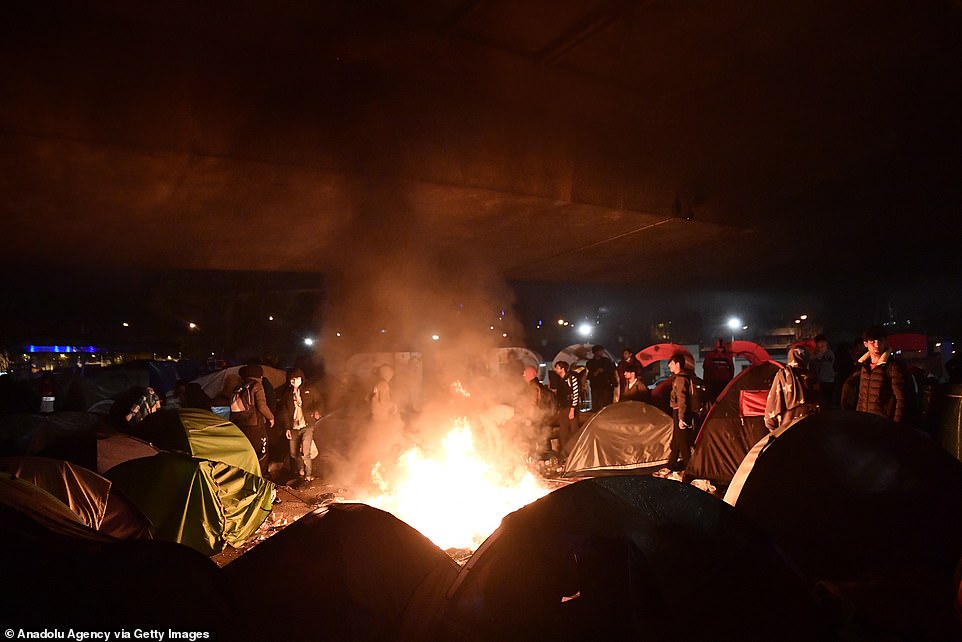 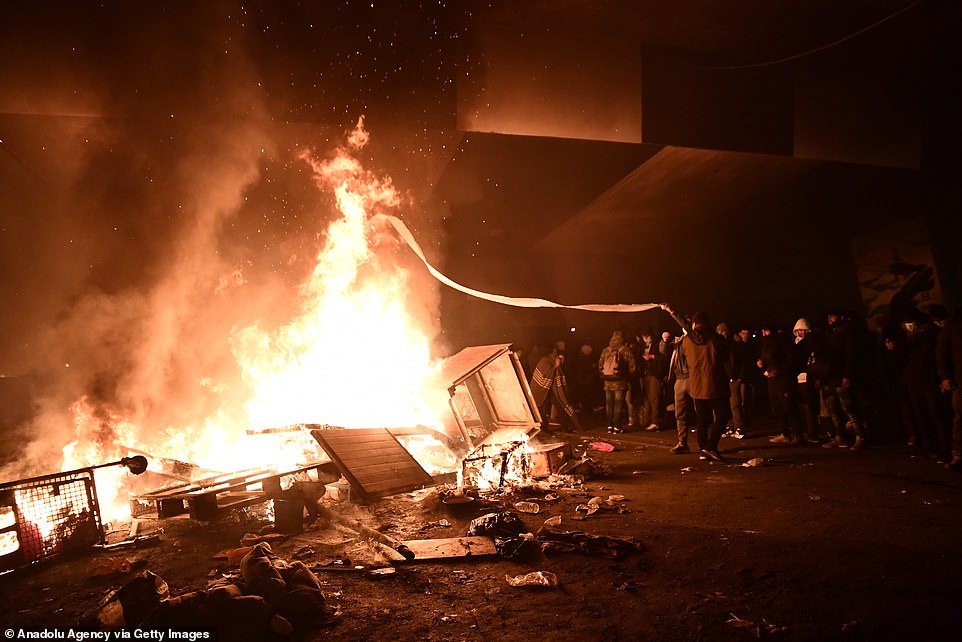 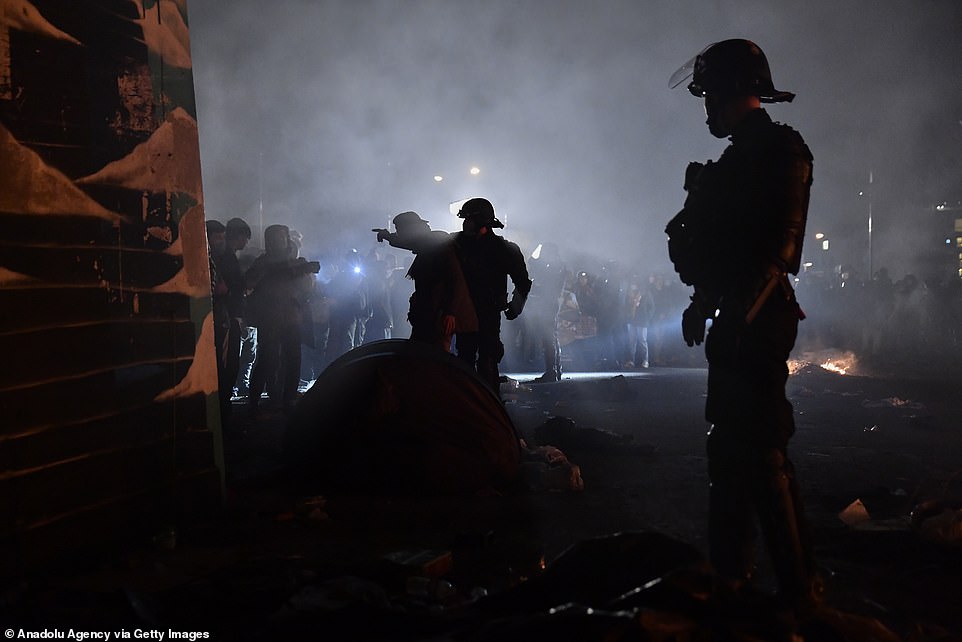 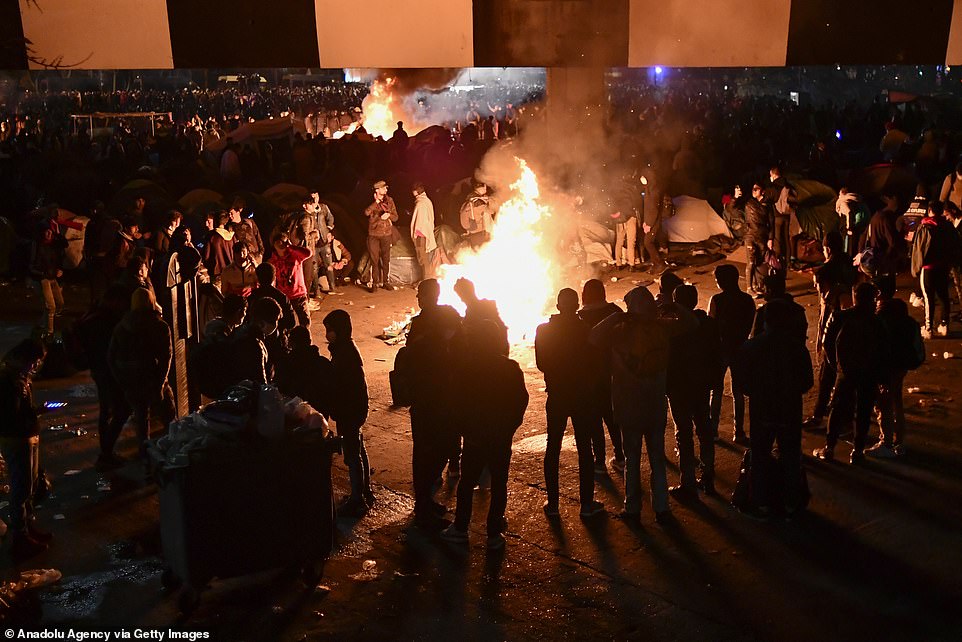 Various bonfires are seen throughout the giant migrant camp

Firemen were dispatched as thick black smoke billowed up from under the overpass near the Stade de France national stadium.

‘This operation aims to ensure that people with the right to be here are given shelter and those who do not have that right do not remain on French territory.’ The police chief said.

A total of 70 buses were deployed to move the migrants on from around 4.30am.

They will be taken to various holding centres, some of them ill-equipped gymnasiums, ahead of processing by the immigration authorities. 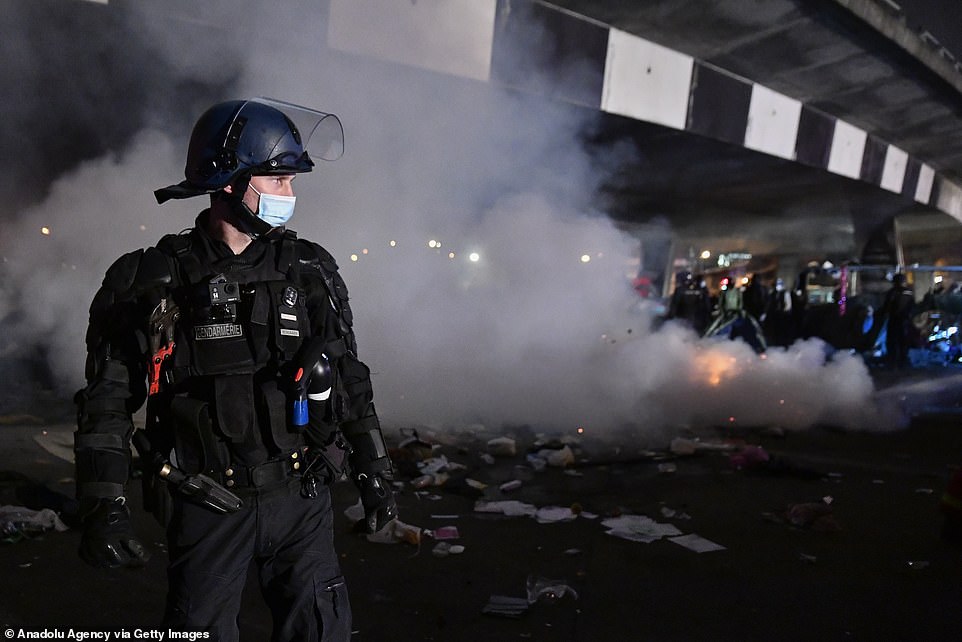 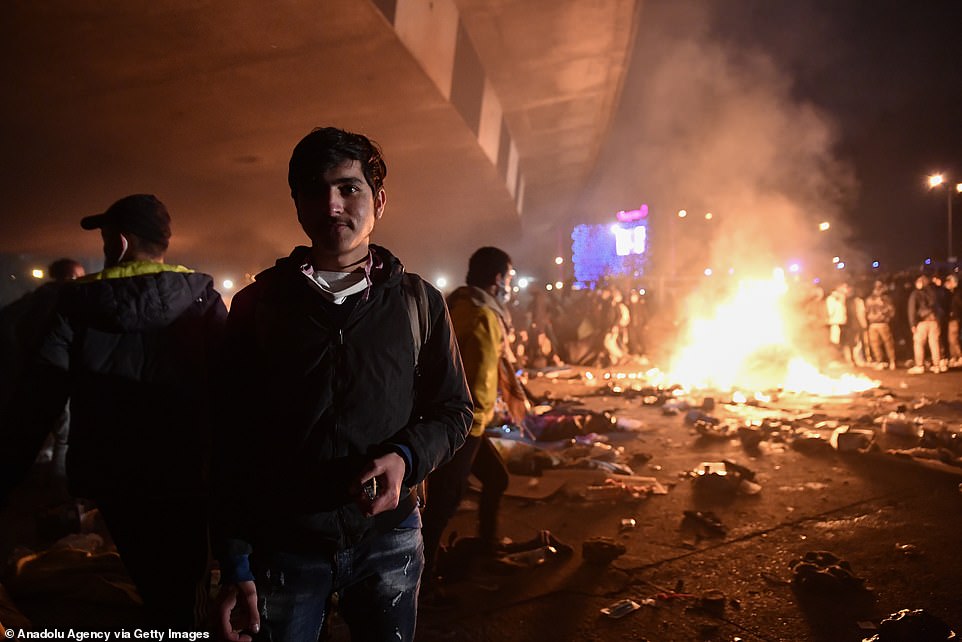 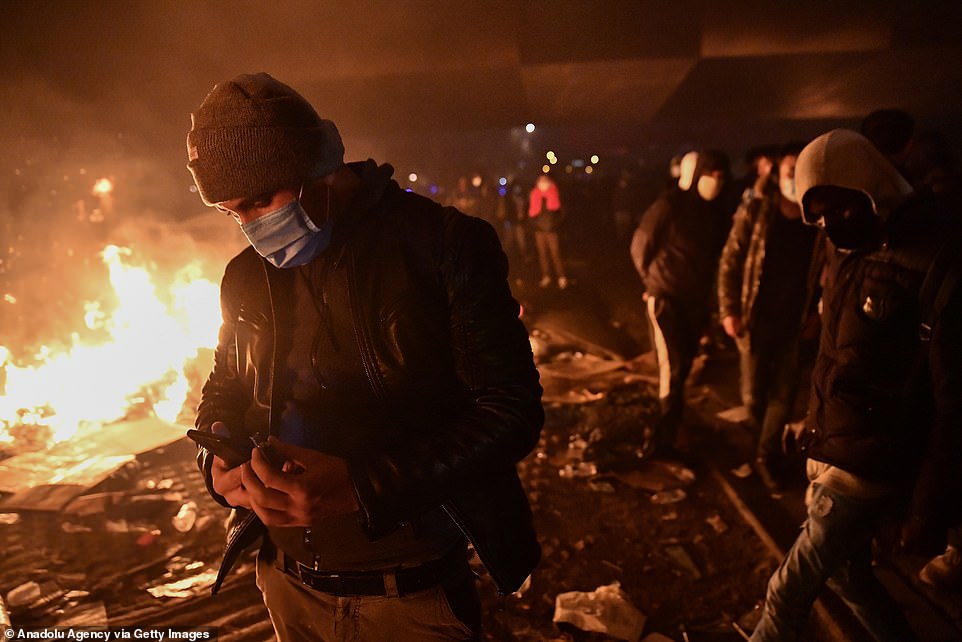 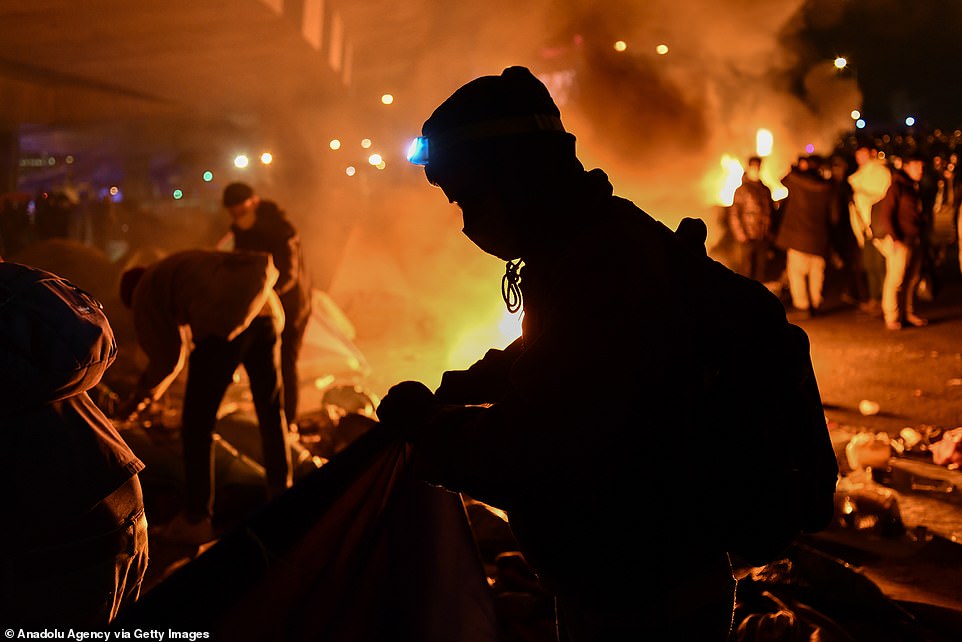 People gather up what little belongings they have as fires burn 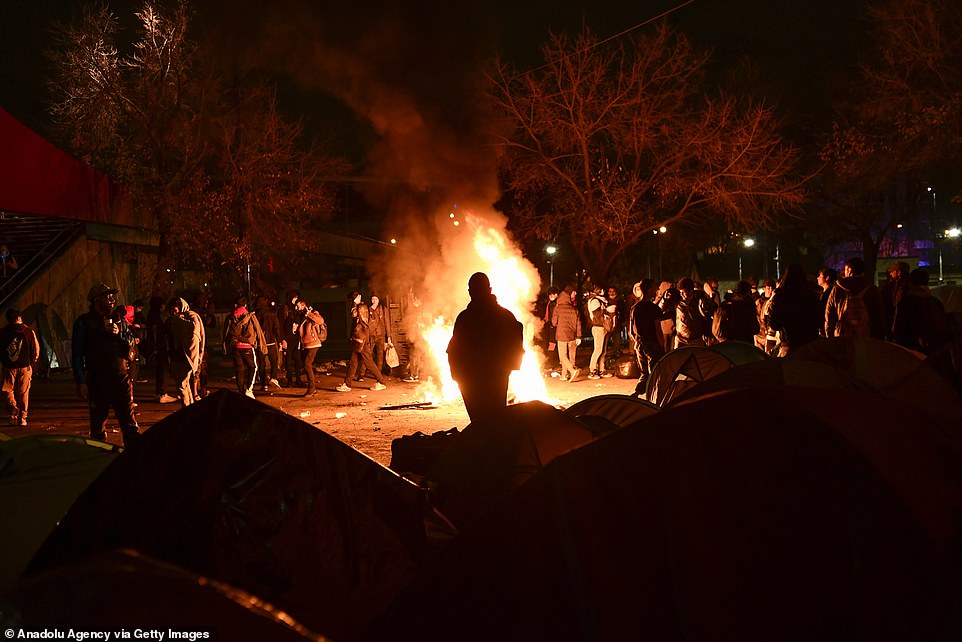 Some 70 buses arrived to start carting the migrants off at around 4.30am on Tuesday 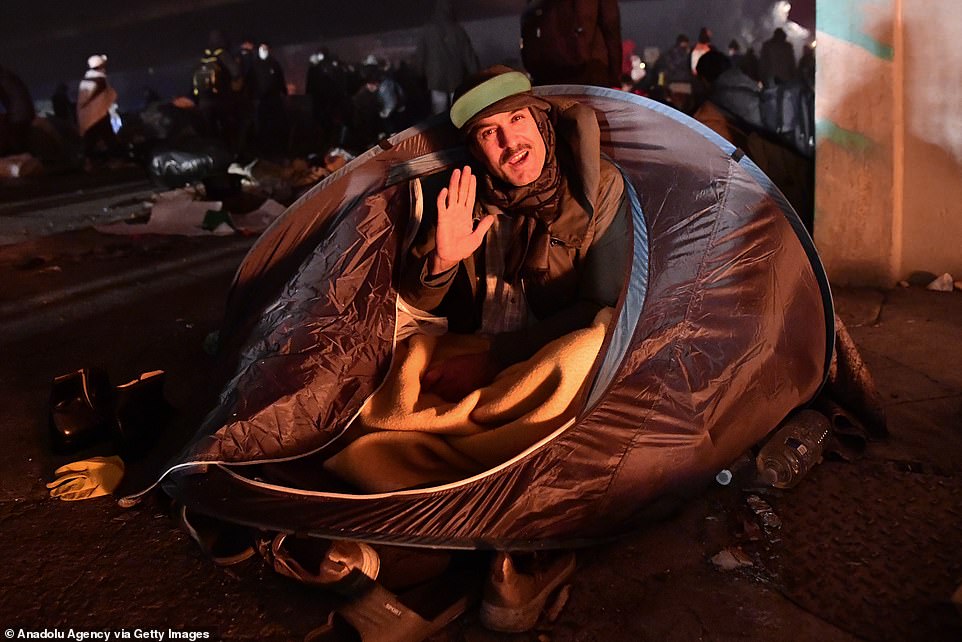 A migrant waves from his tent as chaos unfolds behind him 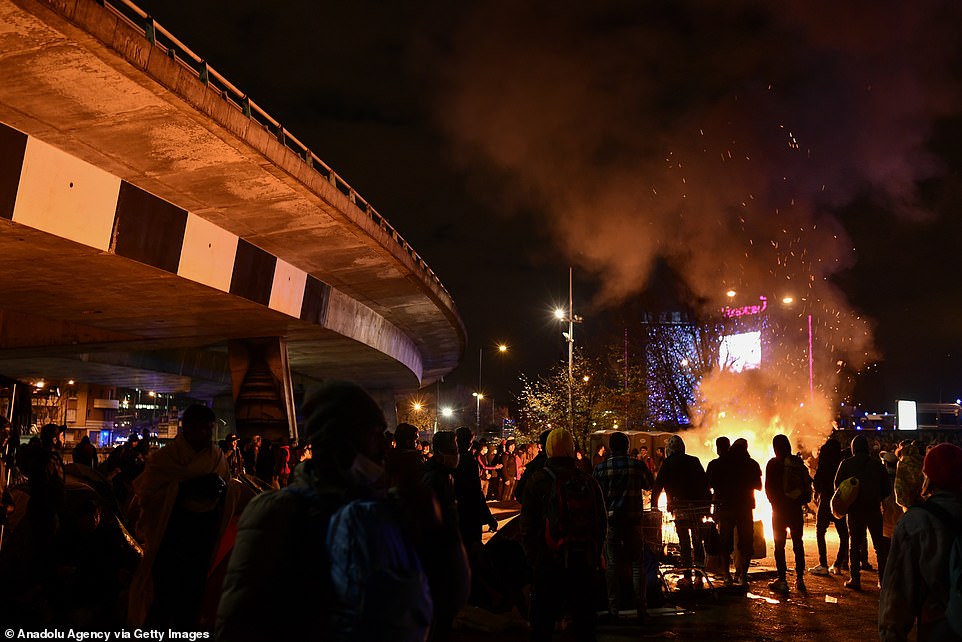 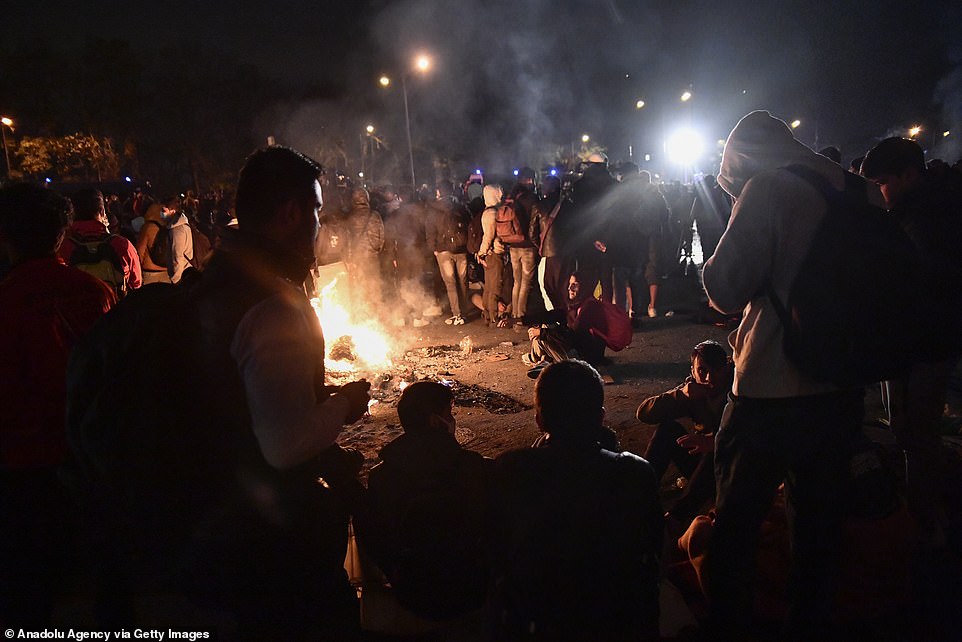 The migrants wait to be moved on beside a bonfire 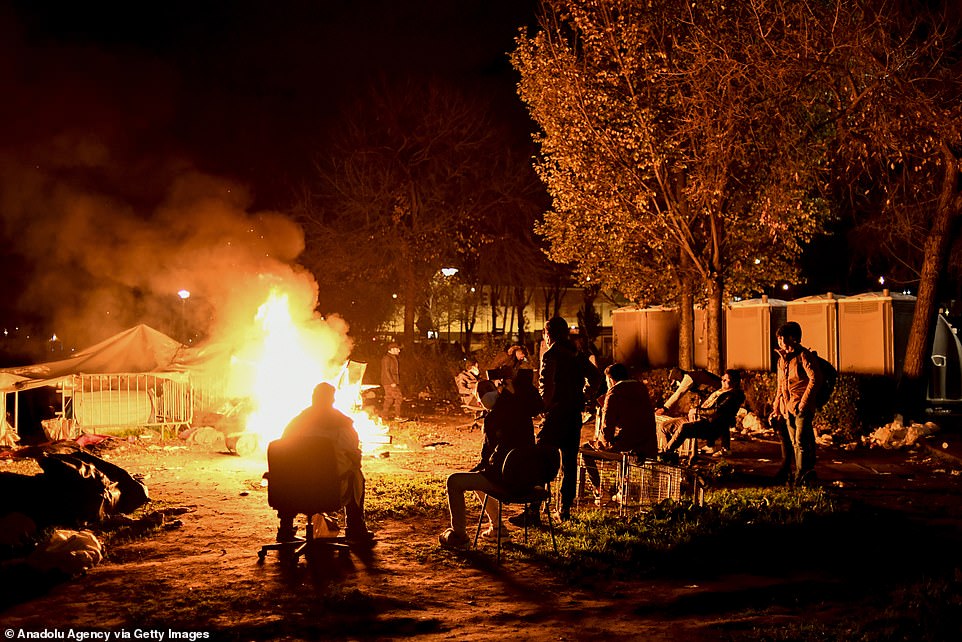 The dismantling of the migrant camp was condemned by some human rights organisations who claimed it was part of ‘an endless and destructive cycle.’

Some claimed there was little mediation and that social workers could have been deployed instead of riot police.

However, others praised the movement of the people, most of them from Afghanistan, Sudan, Ethiopia and Somalia, to more secure accommodating.

Pierre Henry, chair of the France terre d’asile (“France country of asylum”) NGO, tweetd: ‘I welcome the sheltering of some 2,000 people, temporary residents of a place of indignity near the Stade de France.’

The pandemic has further complicated the handling of the vulnerable people.

Of the ten emergency facilities analysed, positive Covid-19 results were in the range of 23 and 62 percent. 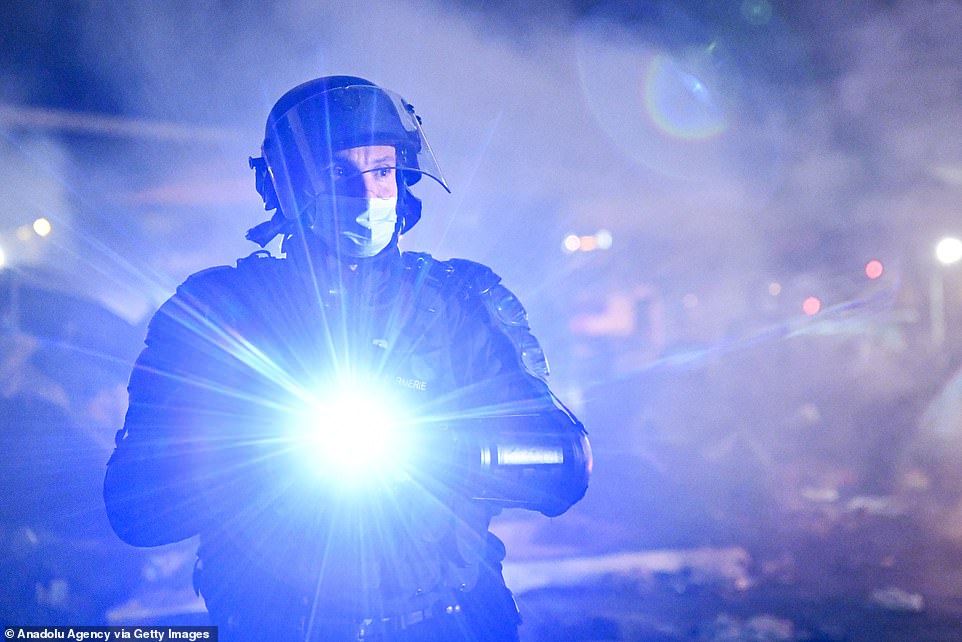 A riot policeman shines a torch at the camp 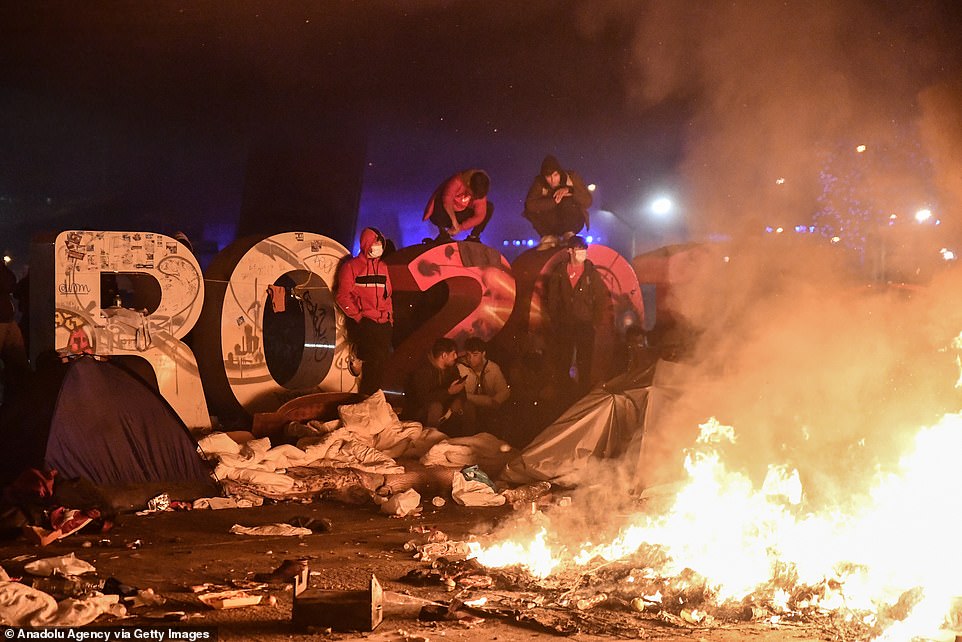 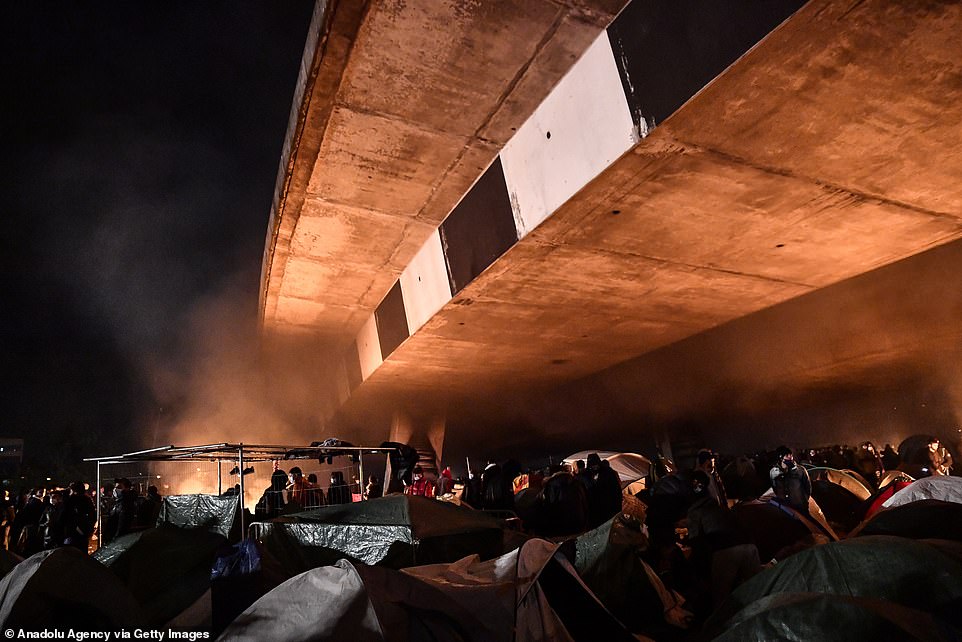 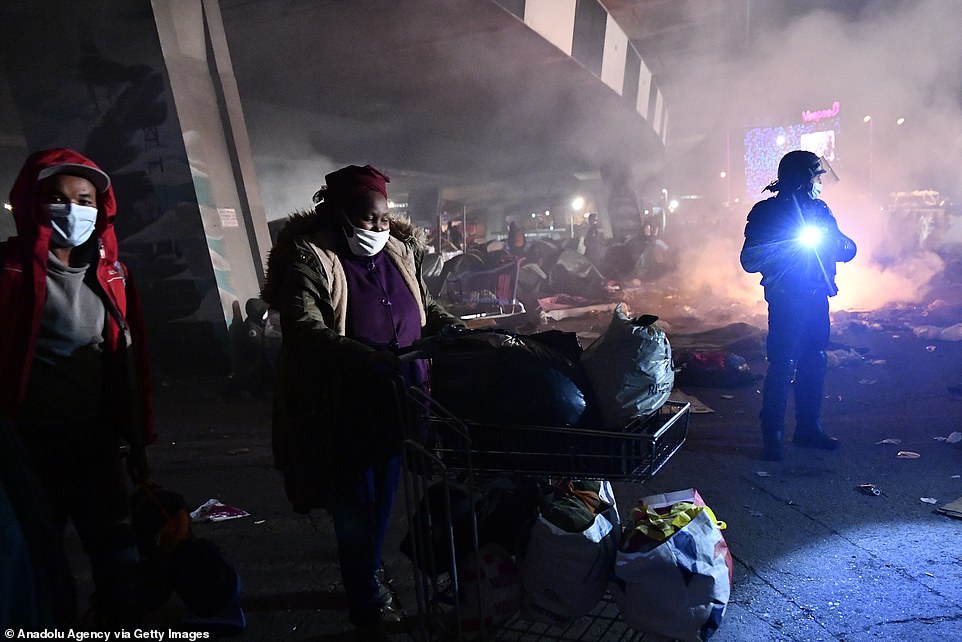 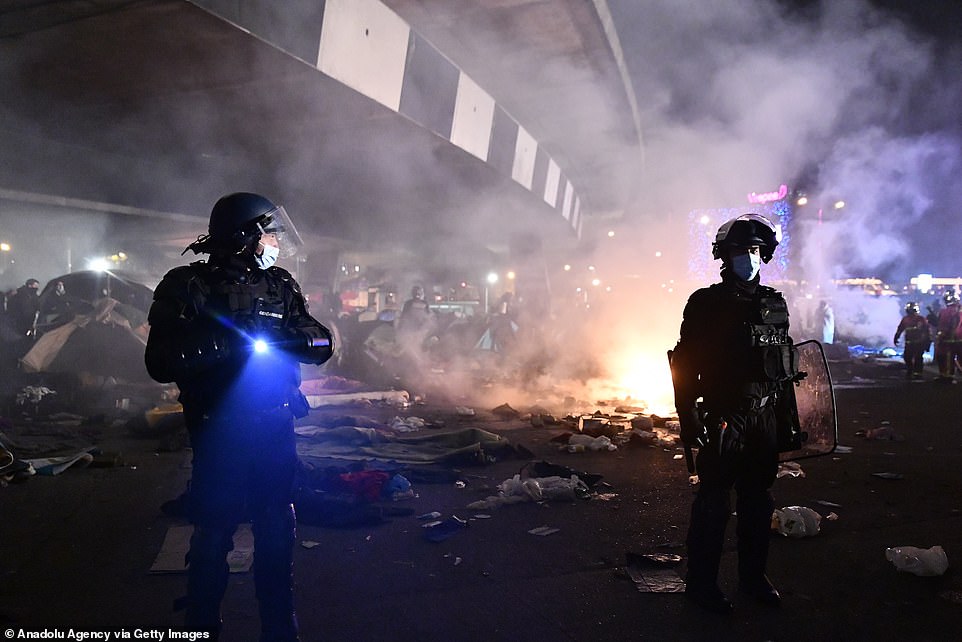 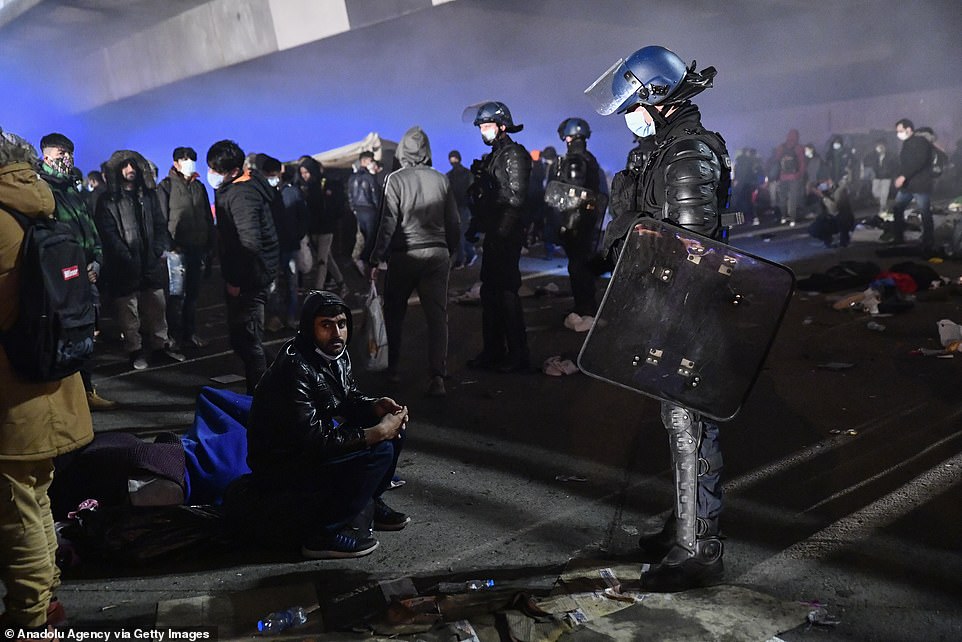 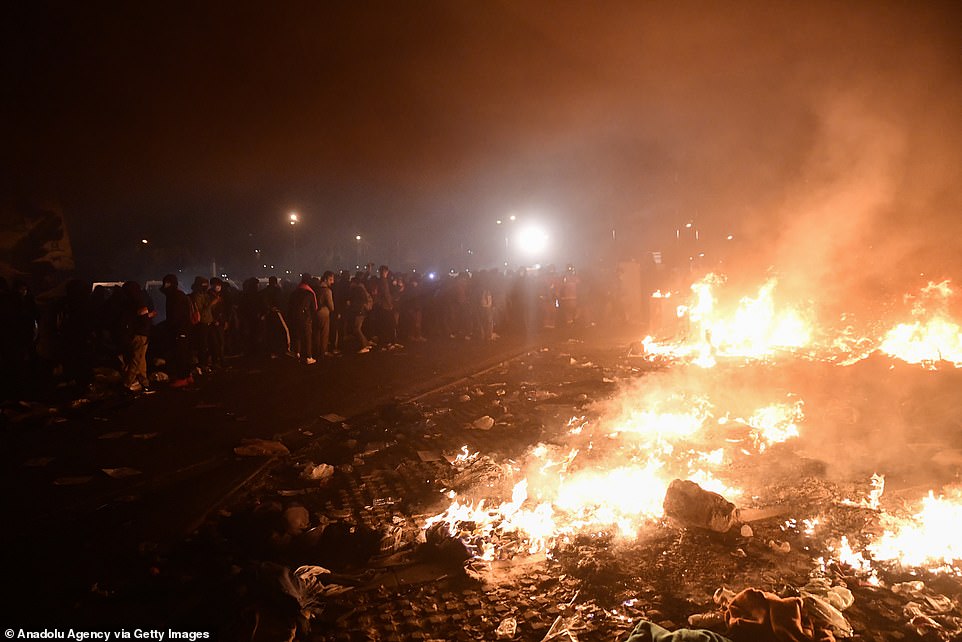 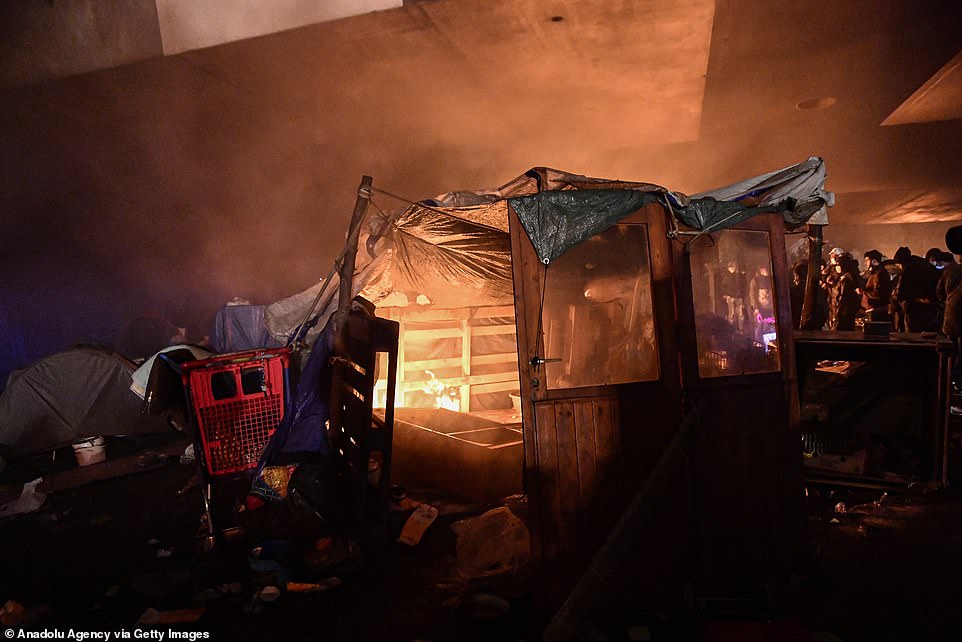 A makeshift shelter constructed of wooden pallets, a door and tarpaulin sheets goes up in flames 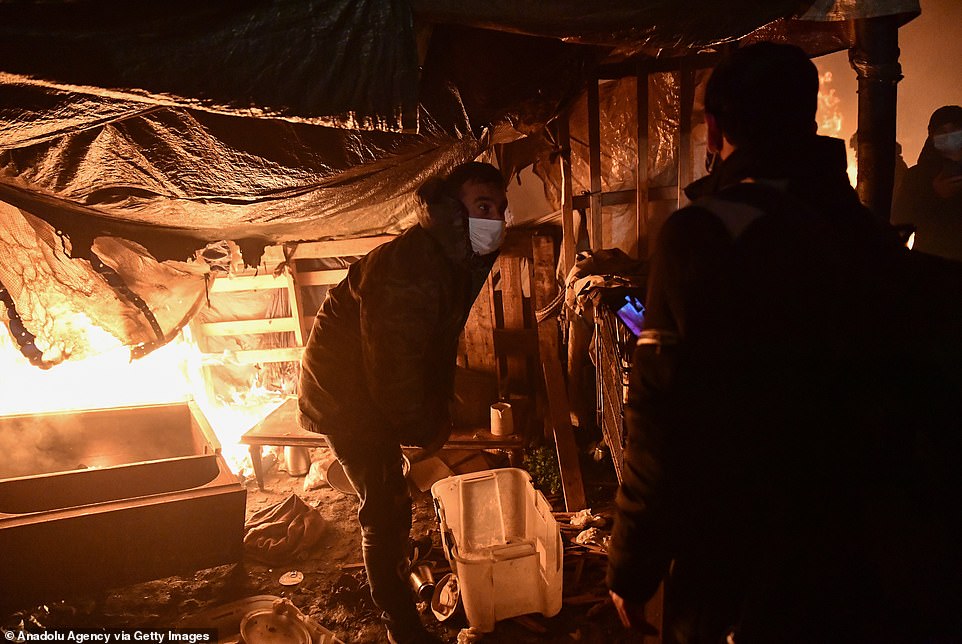 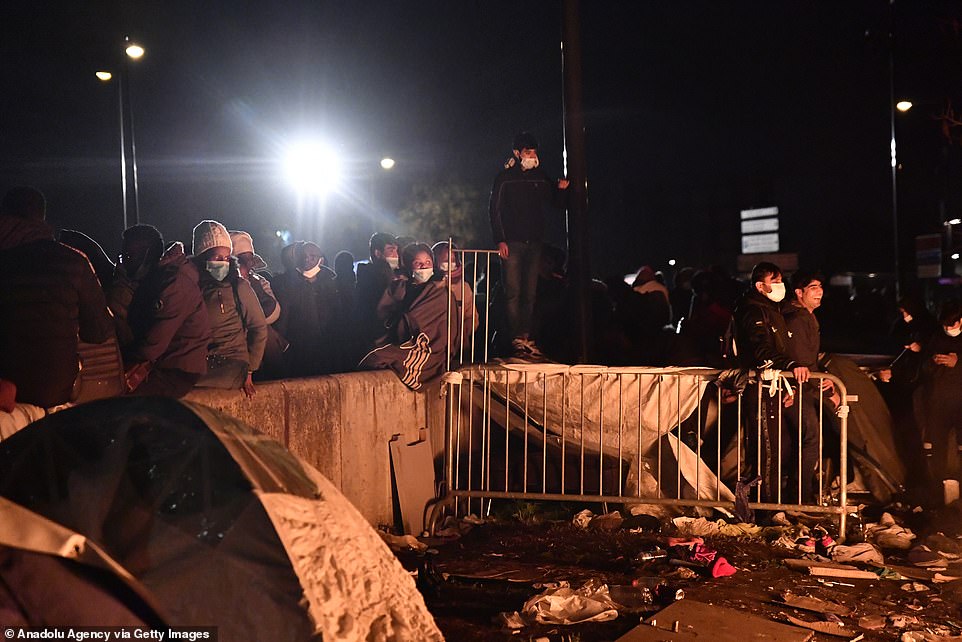