Parisians made the most of their final night of freedom as they packed the bars ahead of new lockdown restrictions which come into force on Friday.

Emmanuel Macron announced new measures on Wednesday in an effort to curb the rising Covid infections across the country.

Revellers seized the opportunity to spend one final evening with friends and family on Thursday before bars and restaurants are closed. 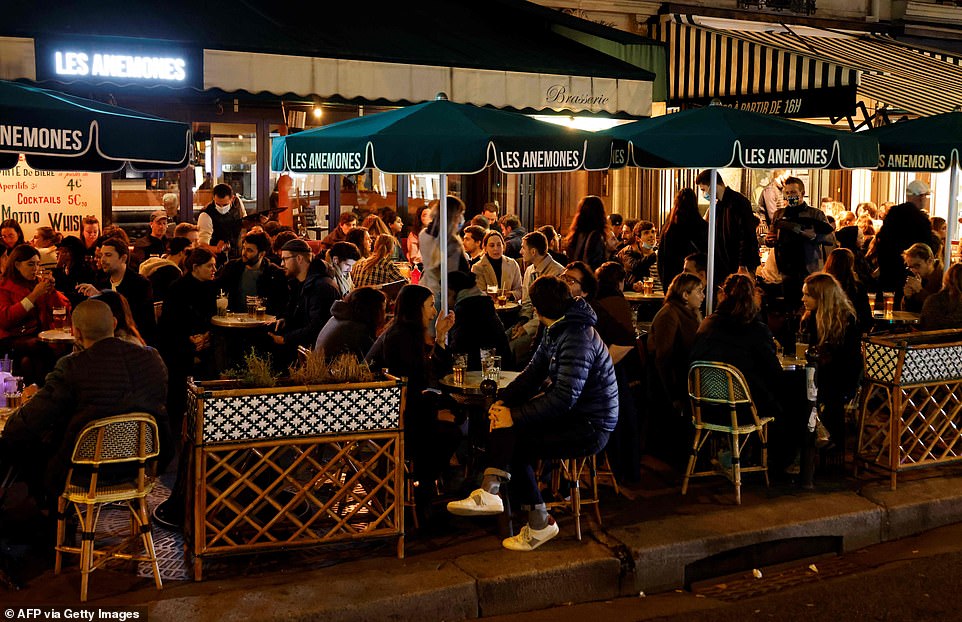 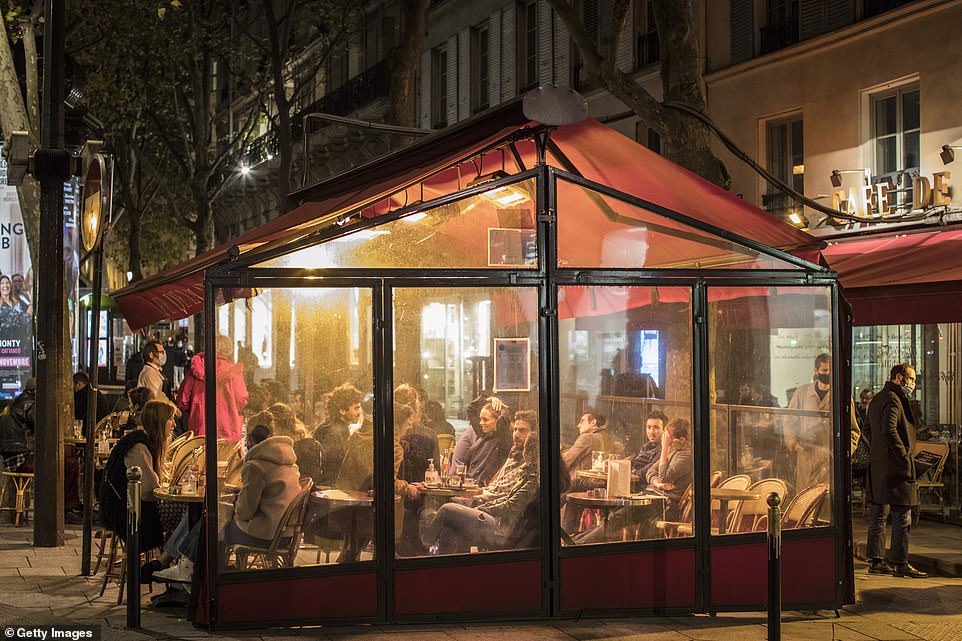 On Thursday, the French public health agency announced 47,637 new infections in 24 hours and 235 deaths, pushing the overall tally beyond 36,000

On Thursday, the French public health agency announced 47,637 new infections in 24 hours and 235 deaths, pushing the overall tally beyond 36,000.

The national measures will take effect from Friday morning until December 1 and are considered to be ‘more flexible’ than the country’s first lockdown, with all public services, schools and essential workplaces to remain open.

But people on the streets will still have to carry documents justifying their reason for leaving home – that will be subject to police checks – and bars and restaurants will close. State-approved reasons for leaving home include buying essential goods, seeking medical attention or taking a daily one-hour allocation of exercise.

Stores and businesses across France were also filled by people racing to get supplies on Thursday – and maybe a last-minute haircut – ahead of the new lockdown. 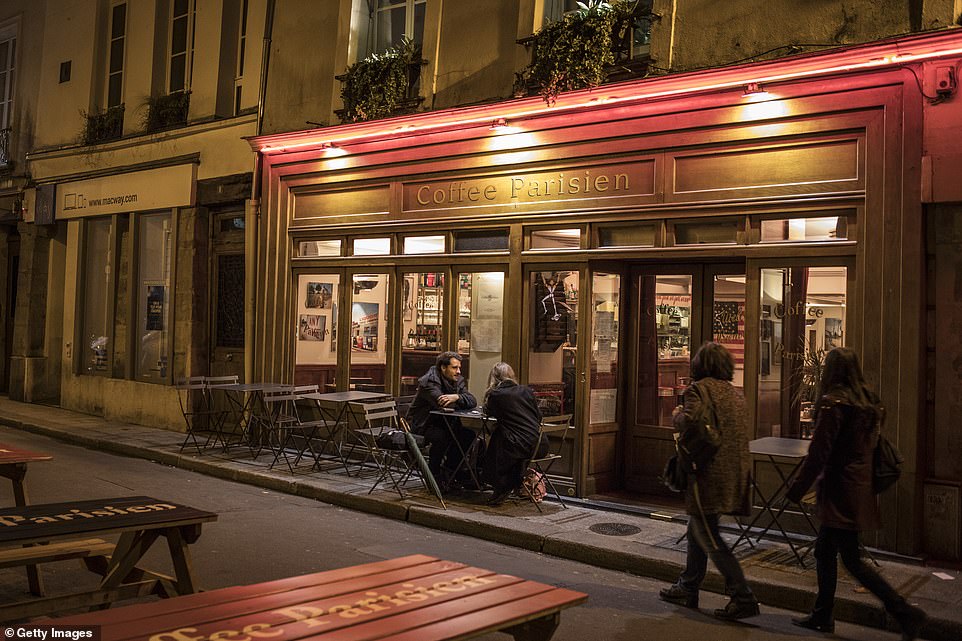 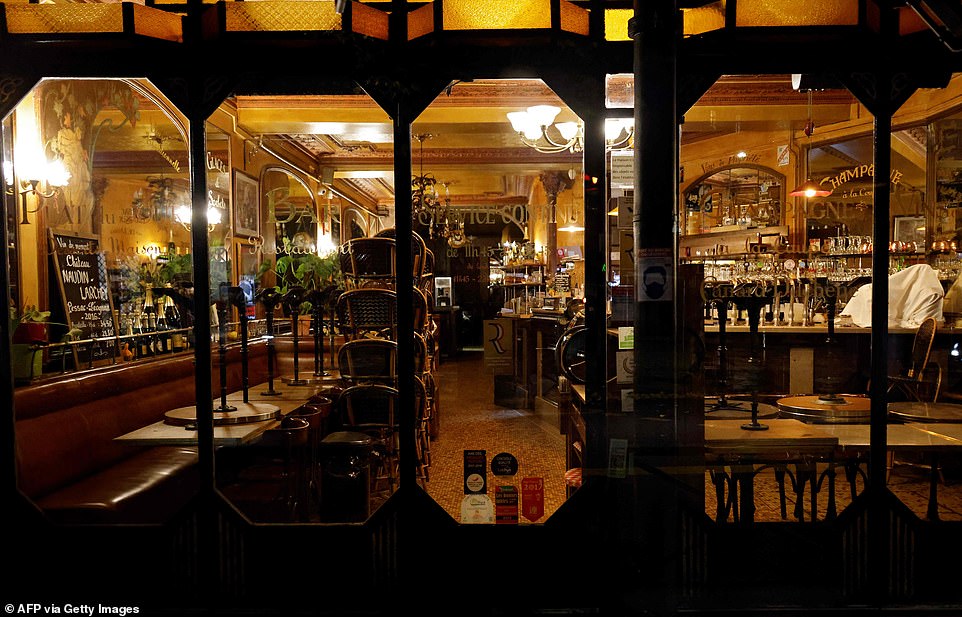 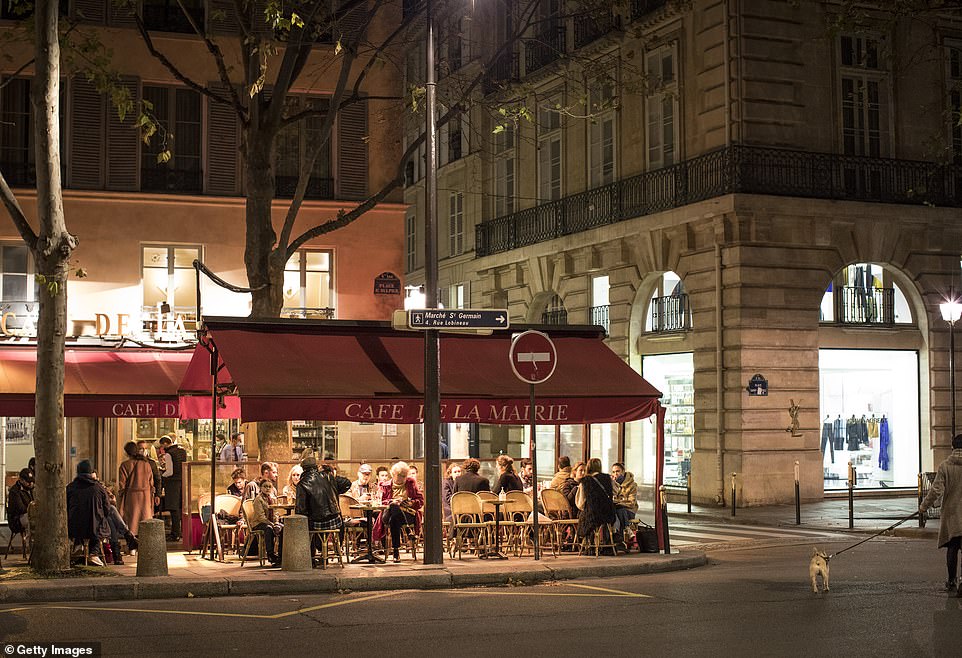 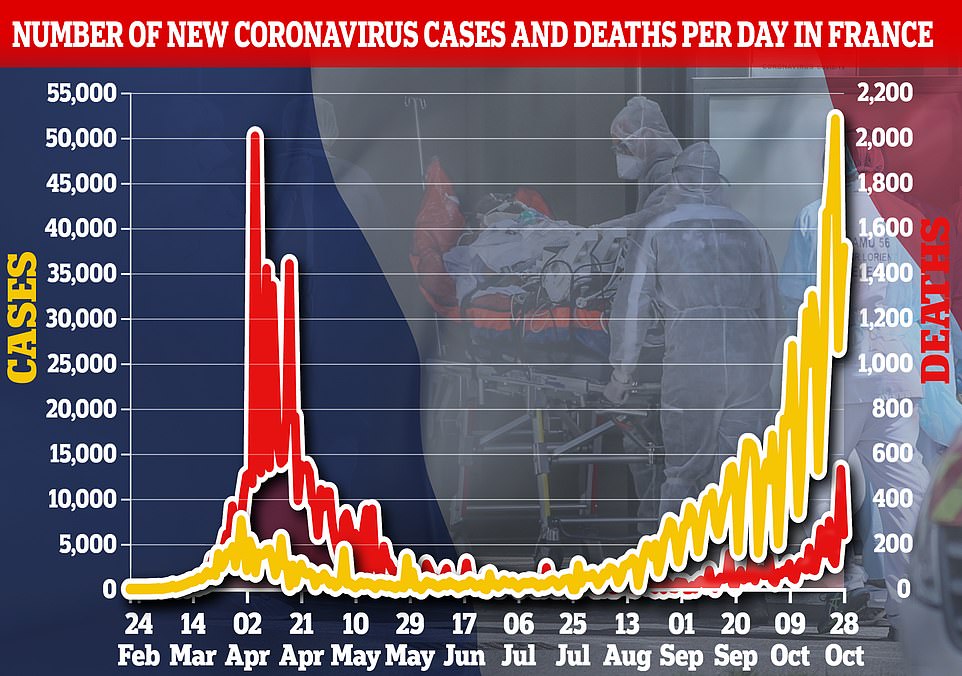 Essentials like pasta and toilet paper were in high demand, as were printer ink and electronics for working from home, while yoga mats were not to be found at many sporting goods stores.

‘I’m stocking up, since we don’t know when this will end,’ said Catherine Debeaupuis, shopping at an electronics retailer in central Paris.

The president said hospitals would soon be overwhelmed by a virus that is spreading ‘at a speed that even the most pessimistic did not predict.’

People will be allowed to leave home only if armed with a self-signed certificate stating their urgent business – food shopping, taking the kids to school, going to work if this cannot be done from home, going to the hospital or a pharmacy. 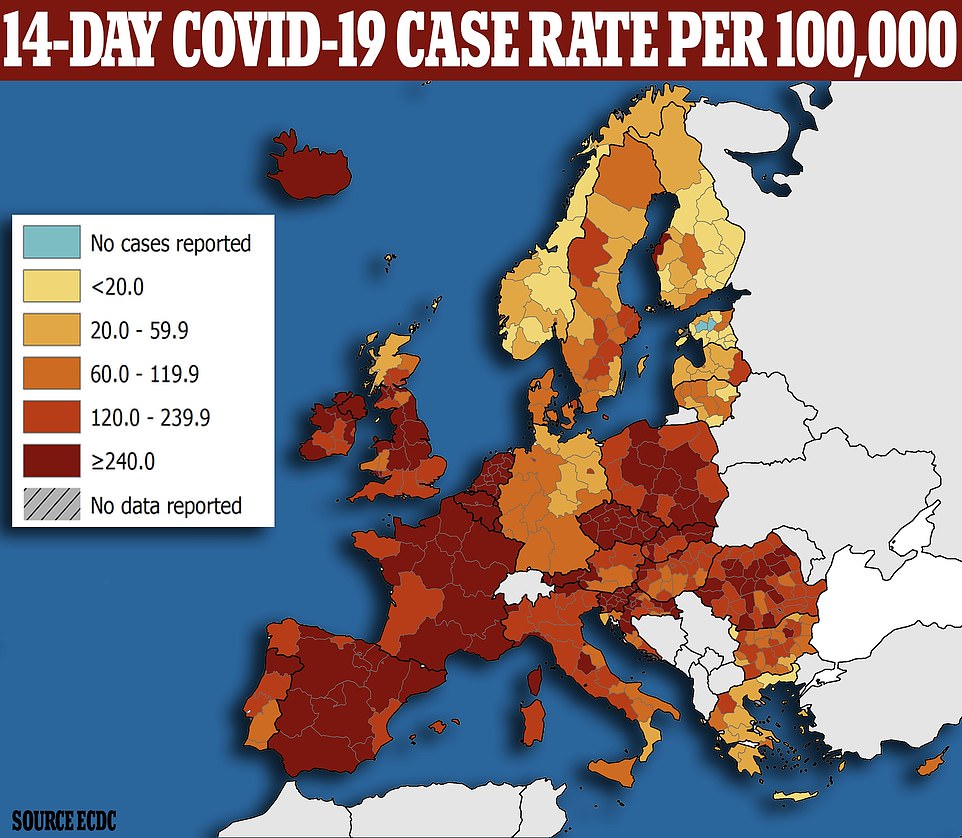 This map shows the 14-day Covid-19 infection rate in Europe. Most of France is in the highest category of 240 or more cases per 100,000 people, along with most of Spain, all of the Czech Republic, the North of England and many other regions around the continent. French leader Emmanuel Macron last night announced a new nationwide lockdown, claiming that 400,000 people will die of coronavirus if the country does nothing to control a second wave that will be ‘more deadly’ than the first

A certificate would also be needed by people wishing to go for a jog or walk their dog, within a limit of one hour and no further than one kilometre (0.6 miles) from home.

Funeral attendance will be limited to 30 and six for weddings.

Those found breaking the rules, which will be policed, risk a fine of 135 euros.

Meanwhile in Germany, Angela Merkel warned of a ‘difficult winter’ and Spain’s parliament voted to extend the country’s state of emergency.

During a meeting with European health ministers, WHO’s European regional director Dr. Hans Kluge said ‘hospitalizations have risen to levels unseen since the spring’ and deaths have sharply risen by more than 30 per cent.

He noted that Europe has now reported more than 10 million coronavirus cases and ‘is at the epicenter of this pandemic once again.’ 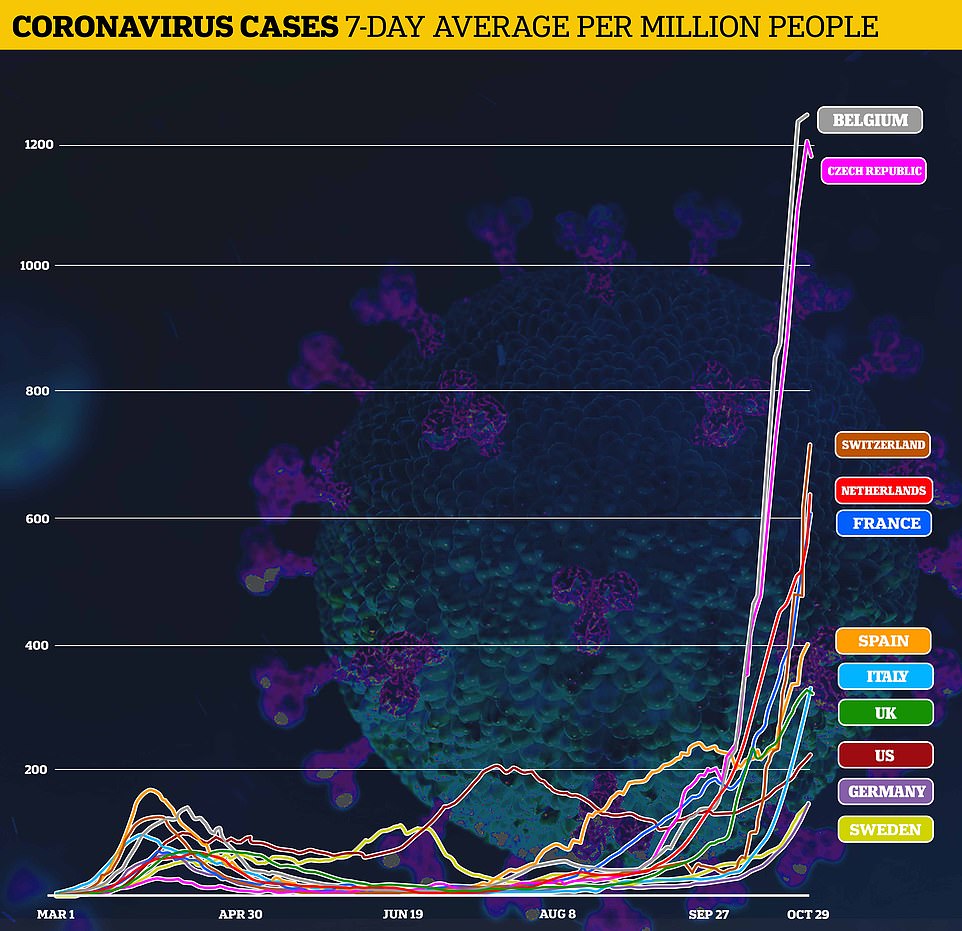 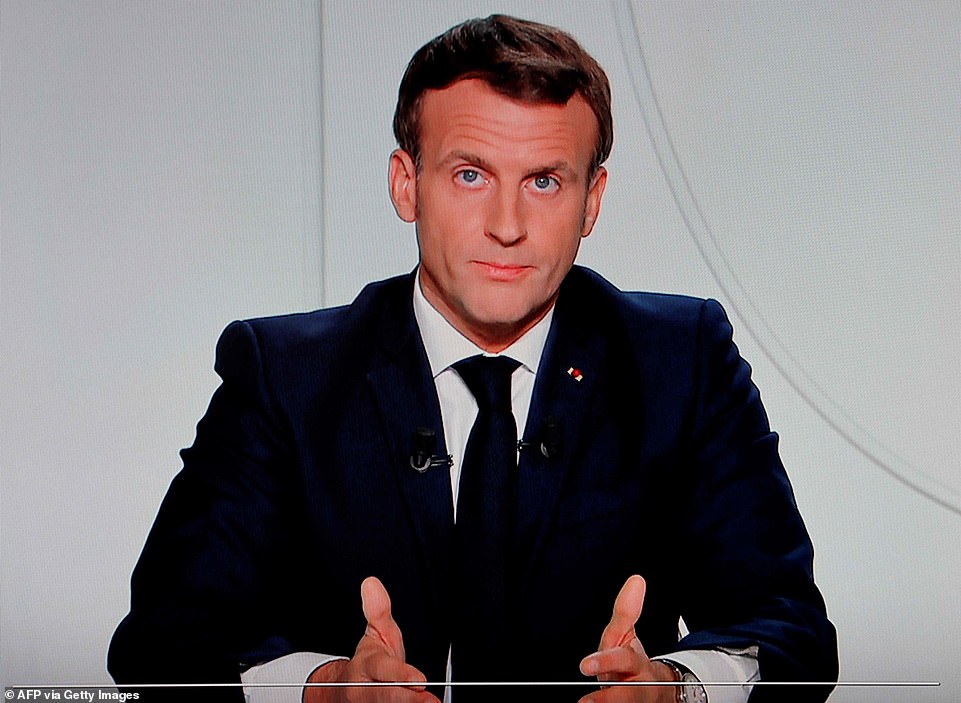 ‘At the risk of sounding alarmist, I must express our very real concern,’ Kluge said.

Speaking to Germany’s parliament ahead of a virtual summit of EU leaders on Thursday evening aimed at better coordinating Europe’s response to the disease, Merkel said her country faces ‘a dramatic situation at the beginning of the cold season.’

Germany’s disease control agency said local authorities reported 16,774 new positive tests for COVID-19 in the past day, pushing the country’s total close to the half million-mark. The death toll stood at 10,272.

‘The winter will be difficult, four long, difficult months. But it will end,’ Merkel told lawmakers.

Under new restrictions going into effect Monday, German restaurants, bars, sports and cultural venues will be shut for four weeks. Gatherings are limited to 10 people from a maximum of two households and all non-essential journeys will be discouraged. Schools, kindergartens, stores and places of worship will remain open – albeit with safety precautions.

Merkel said authorities had no choice but to drastically reduce social contacts as three-quarters of infections in Germany now are no longer traceable. 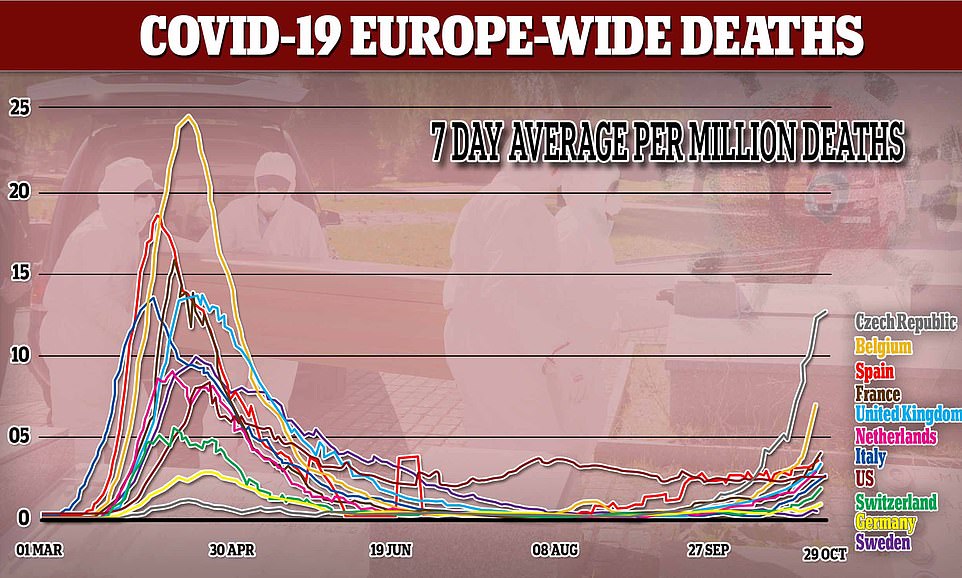 Spain and Italy have both seen deaths increase in recent weeks, although they are lower than during the first wave – unlike in the Czech Republic and other countries in Eastern Europe where deaths have risen to record levels

‘If we wait until the ICUs are full, then it will be too late,’ she said.

Opposition leader Alexander Gauland of the far-right Alternative for Germany party accused Merkel’s government of ‘wartime propaganda’ and likened the pandemic to traffic, arguing that society accepts a certain number of car deaths each year but doesn’t ban driving.

In Spain, authorities have been imposing incremental restrictions on free movement, nightlife and social gatherings, but they have refrained from a strict stay-at-home order like the one that curbed the first wave of infections but scarred the economy. 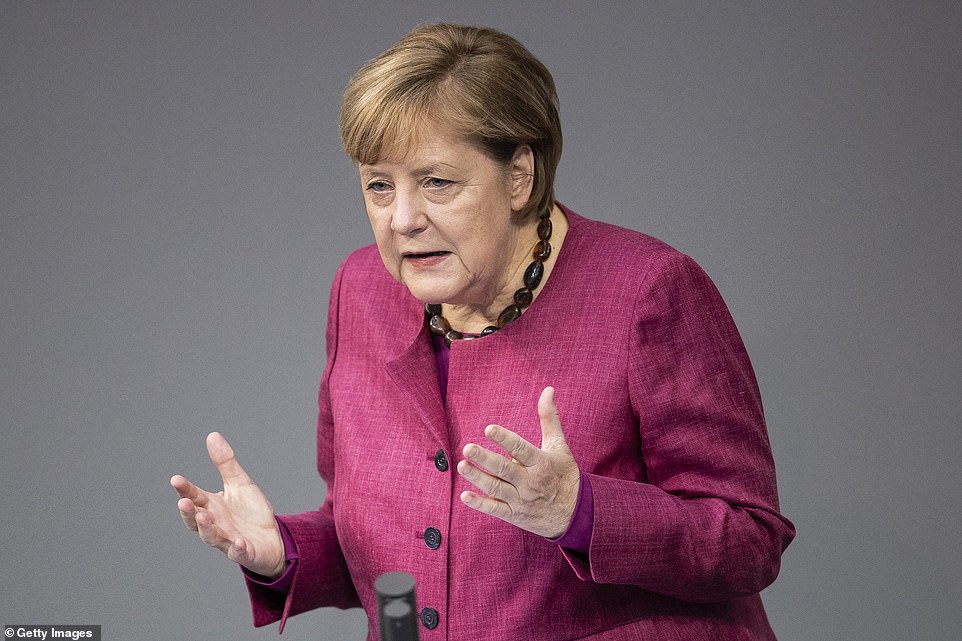 Angela Merkel said her country faces ‘a dramatic situation at the beginning of the cold season’, with 16,774 new positive tests for COVID-19 in the past day 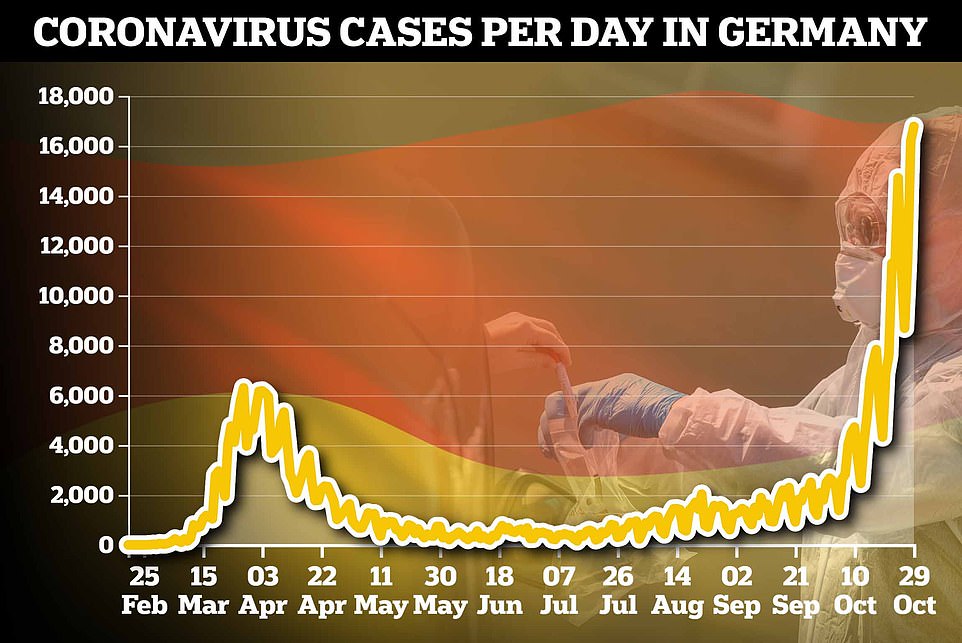 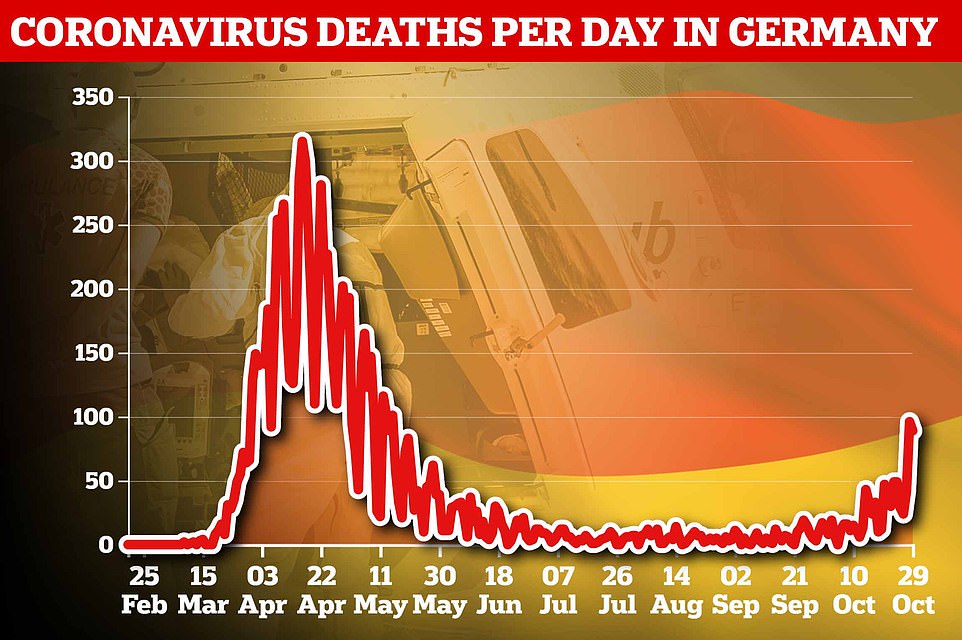 But with officials predicting that current levels of infection will produce a serious shortage of intensive care beds in November, some experts are already calling for a full lockdown.

Spanish regions like Catalonia and La Rioja have already closed bars and restaurants, while most of the rest have imposed curfews limiting nightlife. But extra subsidies have not accompanied the restrictions, prompting loud protests in Barcelona this week by business owners who banged pots, waved cocktail shakers and chanted ‘We want to work!’

Spain’s parliament, meanwhile, voted by a majority to keep the country’s newly declared state of emergency in place until May to try to rein in the resurging pandemic, despite objections by some opposition parties. A vote to lift the measure could be held in March should things improve.

Spain has officially recorded more than 1.1 million COVID-19 cases, although authorities say the true figure could be at least three times higher. Its virus death toll is at least 35,000. 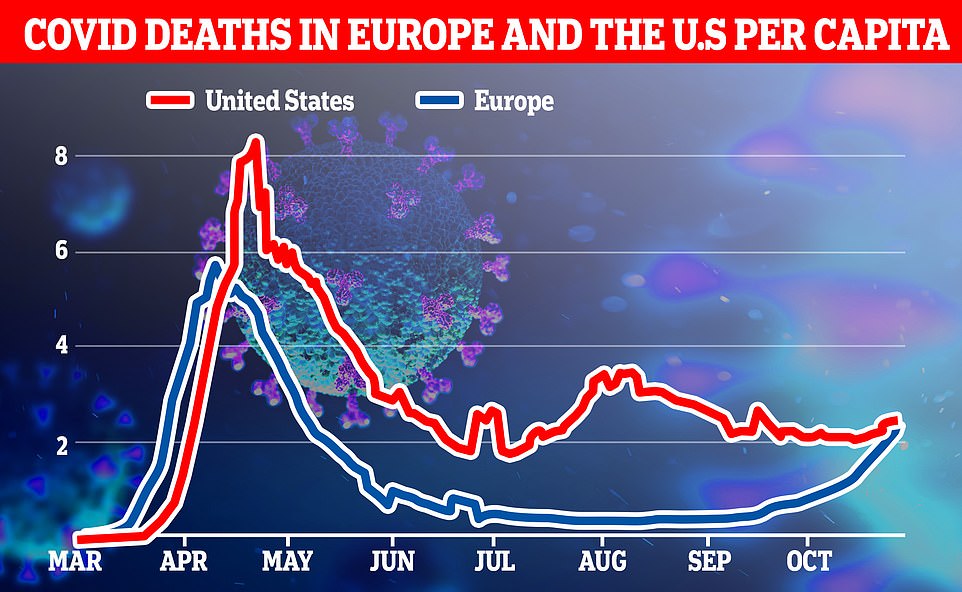 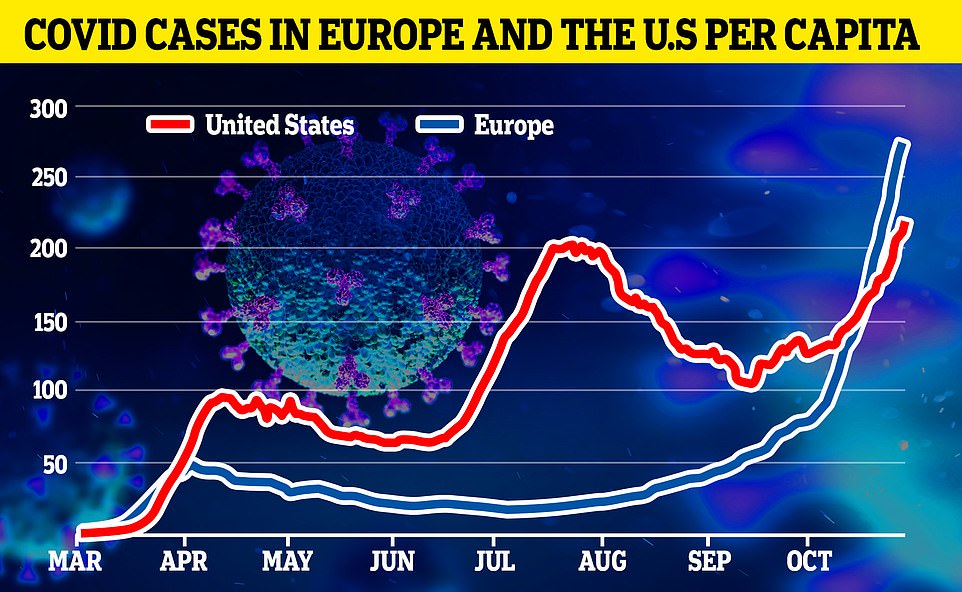 As EU leaders met, officials in Brussels urged them to approve rapid virus tests, which are less reliable than standard kits but far quicker to provide results, and to prepare the vast amounts of cold storage that will be needed to keep large stocks of any virus vaccine once it becomes available.

With Belgium, France and Spain warning that their intensive care units could be overwhelmed within two weeks, the officials say it’s vital that EU countries agree to share information about ICU capacity so patients can be treated across borders if necessary.

Russia, meanwhile, said that it has no plans to impose a nationwide lockdown.