French diplomats in Washington on Thursday canceled a gala at their embassy to celebrate ties between the U.S. and France amid mounting fury at the Biden administration’s role in scuppering a $90 billion submarine deal with Australia.

The event was supposed to commemorate the 240th anniversary of the Battle of the Capes, when the French Navy fought the Royal Navy of Britain during the Revolutionary War.

But it will not now go ahead on Friday, an official told the AFP news agency, saying the occasion ‘has been made more sober.’

A portion of the event was to have been held on a French frigate in Baltimore.

The decision reflects French anger at the announcement that the U.S. and the U.K. would help Australia acquire a nuclear-powered submarine fleet, upending an existing contract with France for 12 diesel vessels.

The French embassy event was supposed to commemorate the 1781 ‘Battle of the Capes when the French Navy delivered a decisive blow to Britain’s Royal Navy in the Revolutionary War. The Battle of Virgina Capes shows British forces on the right and French on the left

Why is Australia building nuclear-powered submarines?

Nuclear submarines are powered by nuclear reactors which produce heat that creates high-pressured steam to spin turbines and power the boat’s propeller.

They can run for about 20 years before needing to refuel, meaning food supplies are the only limit on time at sea.

The boats are also very quiet, making it harder for enemies to detect them and can travel at top speed – about 25mph – for longer than diesel-powered subs.

The first nuclear submarines were put to sea by the United States in the 1950s. They are now also in use by Russia, France, the United Kingdom, China, and India.

A senior US defense official told reporters in Washington DC: ‘This will give Australia the capability for their submarines to basically deploy for a longer period, they’re quieter, they’re much more capable.’

Will Australia have nuclear weapons?

Scott Morrison made it clear that the nuclear-power submarines will not have nuclear missiles on board.

Australia has never produced nuclear weapons and signed the Treaty on the Non-Proliferation of Nuclear Weapons in 1973 which prevents non-nuclear states which don’t already have them from developing nuclear weapons.

Mr Morrison also said the Australia has no plans to build nuclear power stations which are widely used around the world.

‘But let me be clear, Australia is not seeking to acquire nuclear weapons or establish a civil nuclear capability,’ he said.

The nuclear reactors are shielded from the rest of the submarine in a separate section to protect the crew from dangerous radiation.

The US has an excellent safety record with its nuclear-powered fleet although early Russian subs suffered a few accidents which caused 20 servicemen to die from radiation exposure between 1960 and 1985.

At the end of their 20-year lifetimes, the contaminated parts of nuclear reactors need to be disposed deep underground in special waste storage cells.

Anti-nuclear campaigners say any leaks of radioactive waste could lead to an environmental disaster.

In 2016 it signed a deal with French Company Naval Group to build 12 diesel-electric attack subs – but the parties were in dispute over the amount of building that would be done in Australia.

That deal has now been torn up in favour of nuclear powered subs aided by the US and UK who will provide the technology to Australia.

The West is becoming increasingly concerned about the growing assertiveness of China in the Indo-Pacific region where it has made huge territorial claims in the South and East China seas, clashed with Indian troops and repeatedly flown planes over Taiwan.

As a result, President Biden finds himself at the center a diplomatic row, accused of failing to consult with crucial allies – much as he was criticized for pushing ahead with the botched withdrawal from Afghanistan.

The new AUKUS pact to share defense technology between the U.S., U.K. and Australia was meant to show that Washington could still be relied on to promote security in places such as the Indo-Pacific region where China is flexing its muscles.

Instead American officials spent much of Thursday trying to patch up the damage.

U.S. Secretary of State Antony Blinken insisted officials had been in touch with their French counterparts ahead of the announcement and said the U.S. placed ‘fundamental value’ on its relationship with France and on its role in the Indo-Pacific.

‘We look forward to continue close cooperation with NATO, with the European Union, and others in this endeavour,’ he said.

‘France in particular is a vital partner on this, and so many other issues.’

He was speaking at a news conference after meetings between the U.S. and Australian foreign and defense ministers in Washington.

He said it was up to Australia to explain its decision about how they made the decision over its submarine fleet.

‘We value our relationship and our partnership with France on a variety of issues facing the global community,’ she said.

‘I would leave it of course to our Australia partners to describe why they sought this new technology and why they purchased this technology from the U.S.’

The French vessels were due some time in the mid-2030s.

But the new deal means Australia will use U.S. technology to build a nuclear fleet in Adelaide instead.

Adding to the anger, French officials said they had been given little warning.

‘We heard about it yesterday,’ Florence Parly, the minister of French Armed Services, told RFI radio on Wednesday.

The level of French outrage recalled the 2003 rift between Washington and Paris over the Iraq War, which sparked a similar amount of diplomatic fury.

In a statement, the French embassy said: ‘The American decision, which leads to the exclusion of a European ally and partner like France from a crucial partnership with Australia at a time when we are facing unprecedented challenges in the Indo-Pacific region, be it over our values or respect for a multilateralism based on the rule of law, signals a lack of consistency which France can only notice and regret.’

Diplomats said the deal had been kept under wraps for fear China would launch a counter-messaging campaign if it got wind of the plans.

But the result was that even friends of the U.S. were apparently taken by surprise.

In Brussels, EU foreign policy chief Josep Borrell said pointedly: ‘I suppose that an agreement of this nature was not cooked up the day before yesterday.

‘It takes a certain amount of time, and despite that, no, we were not consulted.

‘That obliges us, once again . to reflect on the need to put European strategic autonomy high on the agenda.

The deal also sidelines New Zealand and Canada – who together with the US, UK and Australia make up the Cold War-era Five Eyes intelligence alliance, but now appear isolated from the group.

Other reactions were more predictable.

China denounced the pact as an ‘exclusionary bloc’ while accusing the allies of possessing a ‘Cold War mentality.’

Beijing has launched frequent broadsides at Washington, furious at the way the Biden administration has called it out over human rights abuses in the Xianjing region, the crackdown on democracy activists in Hong Kong, and cybersecurity breaches. 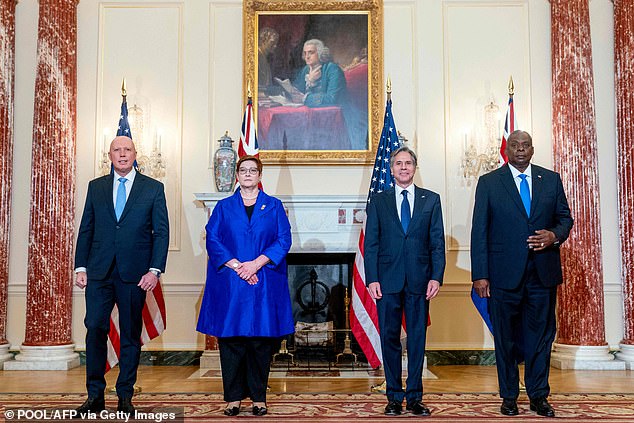