Crypto scams rocketed 58% to £226m in the last year as fraudsters cash in: Here’s how to keep yourself protected from the bitcoin bandits

Crypto scammers have seen their returns nearly double in the last 12 months, according to cybersecurity company NordVPN.

Total losses from UK investment fraud involving fake digital currencies, websites, apps or funds has risen to more than £226million in the year to May 2022 – up from the £143million lost during the 12 months before that.

This year, scammers have already made off with £118million, and currently pocket £36,250 per fraud.

As cryptocurrencies are not regulated by the UK’s Financial Conduct Authority, criminals are finding it easier to lure Britons to bogus investment and pension schemes with the promise of market-beating returns.

These fake schemes appear to have become more profitable for scammers despite much of the cryptocurrency market having slumped over the past six months.

The two biggest names, bitcoin and ethereum, are each down 48 per cent and 62 per cent respectively since the start of the year – as of 8 July.

However, while the amounts being stolen is rising steeply, this year’s data shows only a small increase in the number of incidents reported, suggesting criminals could be profiling victims to extract more from their scams.

‘These frauds are thriving, despite the huge crash in Bitcoin and other currencies, and worryingly the clear rise in the amounts stolen per fraud shows the scammers are getting better at fleecing their victims.

‘With huge amounts of personal and financial information for sale on the Dark Web, it could be that individuals are now being specifically targeted by hackers.’

Often the schemes will be advertised on social media, using fake celebrity endorsements from respected finance experts like Martin Lewis, or stars of the TV investment show Dragons’ Den.

Hackers may also use phishing emails or text messages, either to persuade victims to invest in a non-existent cryptocurrency fund via a bogus website, or to encourage them to click on a link or download an app containing malware.

This can then infect their devices and steal data or drain money from online accounts. 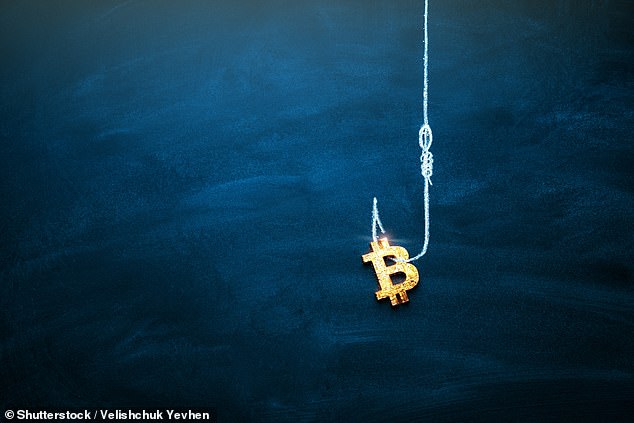 Cyber thieves’ success at touting fake schemes has come despite the crypto crash.

Once these links are downloaded, Malibot, created in Russia, can quickly give criminals access to a victim’s phone, enabling them to harvest personal and financial data and send messages to other phones spreading the malware further.

Briedis adds: ‘With banking and investing online a part of everyday life it is vital to take steps to keep fraudsters at bay.

‘This includes making use of smart tech like VPNs and virus-checking software, and increasing your digital safety by creating strong passwords and checking the source of any link, site or app before you click.’

How to protect yourself?

Don’t click on suspicious download links, even if they appear to be for a real app. Always use official digital marketplaces like Google Play or Apple’s App Store

Whatever the promised returns, no genuine investment scheme will put you under pressure to hand your money over immediately

Talk through any significant investments with friends or an adviser and do an online search on any potential scheme.

4) Be suspicious of any celebrity endorsement

Many fraudulent schemes feature well-known figures in their online and social media advertising but be wary of any celebrity endorsements.

For example, more than 1,000 fake schemes claiming to have the backing of finance expert Martin Lewis were reported to Action Fraud.

5) Use a VPN service

As well as encrypting your traffic so hackers won’t be able to see what you do online, a VPN service can in some cases also check files you download for mal