France on Friday announced two cases of the deadly new virus from China, the first cases in Europe.

The two confirmed cases were announced by the health minister, Agnes Buzyn. She said that both of the sickened people had traveled to China.

The minister said she expects more cases. ‘We have two cases,’ she said. ‘We will probably have other cases.’

The minister said she believes that one reason why France is the first European country to have confirmed cases is that it has developed a test allowing medics to rapidly diagnose the sickened.

One of people sickened, a 48-year-old man, passed through Wuhan, the epicenter in China for the virus, before traveling to France on Wednesday, the minister said. That person is hospitalized in the southwestern city of Bordeaux.

The other person is hospitalized in Paris. The minister said that that person also traveled to China but that she has little other information about the case. It was confirmed shortly before she spoke at a news conference.

France has confirmed two people there have coronavirus, making them the first cases in Europe affected by the infection that’s spread to at least 945 people in 11 countries outside China, where the outbreak began and has killed 26 (inset left) 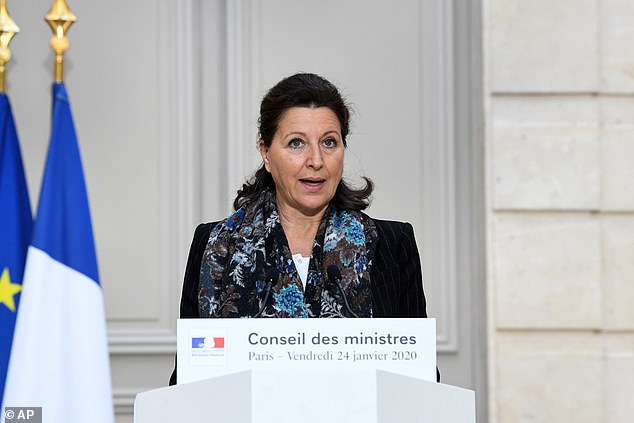 France’s health minister, Agnes Buzyn, said on Friday that she expects the country will see more cases of coronavirus

France’s first two cases come hours after the US confirmed its second case and days after a Chinese woman bragged on social media that she had masked her coronavirus symptoms in order to sneak into France and dine at Michelin-starred restaurants in Lyon.

Airports in France were reportedly screening passengers for fevers, but the woman claimed she loaded up on medications to lower her temperature so she could ‘evade’ detection.

Chinese authorities then issued a stern warning for citizens to comply with screening and seek medical attention if they developed symptoms.

It is unclear whether that woman is linked to the two confirmed cases.

With the addition of France, the coronavirus has now spread to at least nine countries worldwide.

In China, an estimated 926 people have been infected and 26 have died.

No deaths have been reported in other countries, but at least 19 people outside China are now sick with the SARS-like respiratory illness.

The virus appears to primarily cause severe illness in elderly people with underlying health conditions.

But Chinese authorities today reported a first death in a younger person, a 36-year-old man. It’s unclear if he suffered from any other chronic health issues.

In the UK, no cases have been confirmed and 14 people who initially had suspicious symptoms have been cleared. 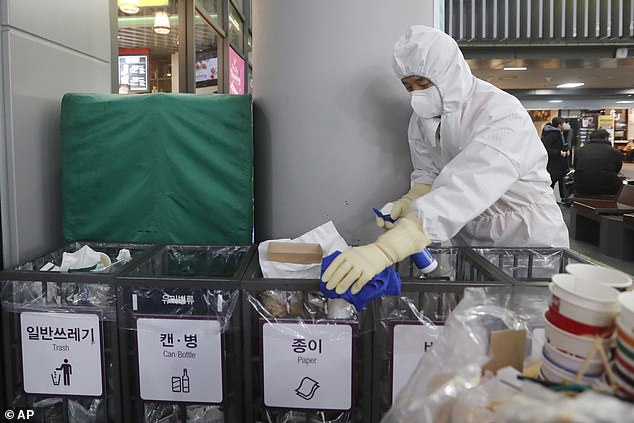 France has confirmed two coronavirus cases, the first in Europe. Despite prevention measures such as sanitation being done in South Korea (pictured), the virus continues to spread globally

The second confirmed case in the US was in a woman in her 60s in Chicago, Illinois.

Earlier this week, a man in his 30s in Washington state was diagnosed with the virus. Both American patients are in ‘good’ condition, according to health officials from their respective states.

Chicago health officials said in a Friday call that the female patient there had flown back to the US from WUhan on January 13 – before screening and travel restrictions began in the US and China, respectively – and had no symptoms in transit.

They developed later, and her doctors believe her contacts were limited to family members in her own home.

The Washington patient, on the other hand, came into contact with at least 43 people, who are currently under assessment. No additional diagnoses have been made.

Public transit has been shut down and travel in and out cut off in Wuhan as well as at least 10 other Chinese cities and towns in an effort to slow the spread of the virus.

Temporarily named 2019-nCoV, the virus behind the current outbreak belongs to the same coronavirus family as SARS and MERS.

So far, it’s proven less deadly, but possibly more contagious, as it has spread with alarming speed around the globe.

CEO of the Coalition for Epidemic Preparedness Innovations (CEPI), Dr Richard Hatchett, described the coronavirus threat as the most worrisome of his career.

‘In 20 years of working on epidemic preparedness, I can’t say that I’ve been more concerned than I am about the current virus,’ he told Channel 4 News in the UK.