The parents of a four-year-old member of Mensa have had to restrict their son’s TV usage because he easily picks up new languages and speaks back to them in Arabic and Spanish which they can’t understand.

Saashwat Aroon, from Reading, was just three-and-half years old when he was accepted into Mensa – making him one of the youngest members currently part of the prestigious society.

His impressive IQ score ranked him in the 99.9th percentile despite having only been to nursery for a few months prior. The top possible IQ score for his age is 151.

Speaking to MailOnline, his father Aroon Ramarajen, 34, revealed that his son learned everything at home without any education, simply by reading and watching videos.

Mr Ramarajen, a chartered accountant, and his wife Pavittra Aroon, a 33-year-old HR consultant at LSE, moved from Chennai in India to Reading in 2019 with baby Saashwat and their eldest son, Niyyanth, who is aged six.

Despite their son’s incredible talents, they have also found it challenging at times when he breaks out into different languages.

‘He just started speaking Spanish from watching YouTube. Initially he was trying to learn a couple of others like Arabic and Chinese,’ Mr Ramarajen said.

‘But we basically stopped showing him too much TV at one point because he just starts talking to us in Spanish and Arabic which we don’t understand – that’s the reason we restricted his usage.

‘Once he starts going into too much Spanish, irrespective of how much I speak to him in English, he will speak only back in Spanish which is a challenge for us.’

Saashwat Aroon (pictured with Mensa certificate) was just three-and-a-half years old when he was accepted into Mensa after achieving an IQ score of 147 that ranked him in the 99.9th percentile 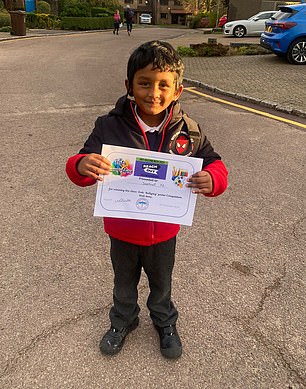 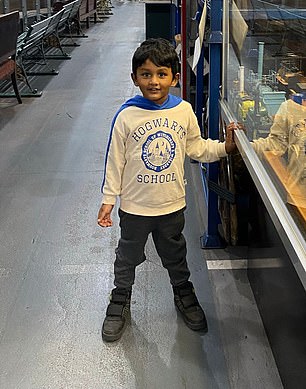 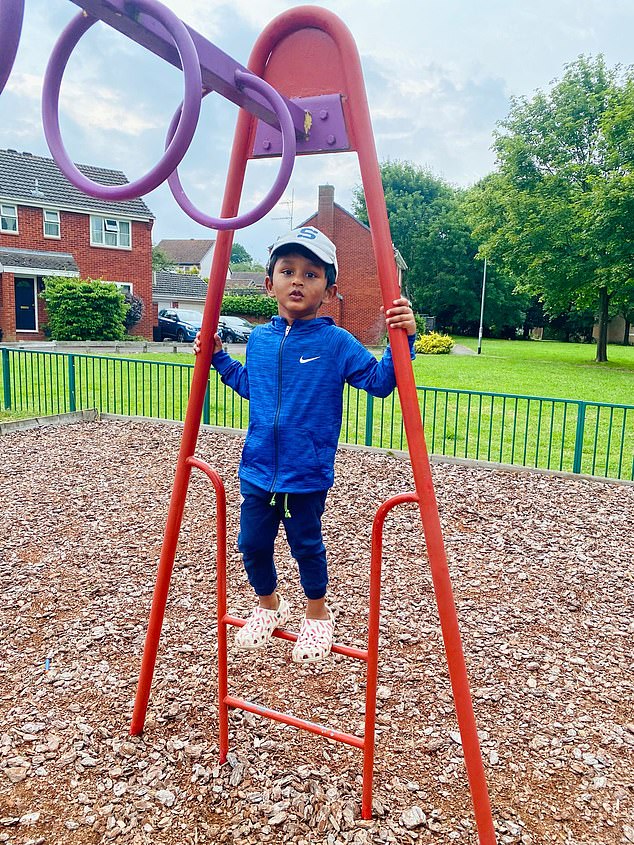 When Saashwat was three-and-a-half, he completed an IQ test which now makes him the fourth youngest member in the highly prestigious Mensa organisation

Mr Ramarajen, whose company is based in Bristol but either commutes or works from home, said that Saashwat first began reading books, counting numbers and picking up languages ‘without any training from our side’.

The parents spoke to a few people who suggested that they should get Saashwat assessed but due to the pandemic this was delayed.

But when the child genius was three-and-a-half, he completed an IQ test which now makes him the fourth youngest Mensa member.

The other three children are all also aged four but marginally older. The youngest current member turned four this month and the youngest in Mensa’s history was two-years-old. 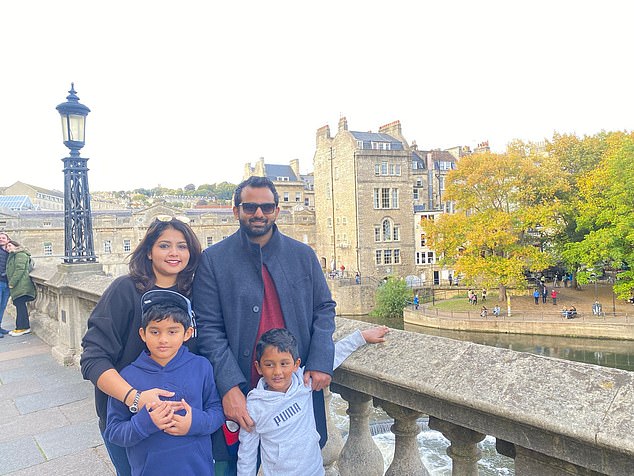 Saashwat’s parents Aroon Ramarajen (back right), a chartered accountant and his wife Pavittra Aroon (back left), a 33-year-old HR consultant at LSE, moved from Chennai in India to Reading in 2019 with Saashwat (front right) and their eldest son, Niyyanth (front left), who is aged six 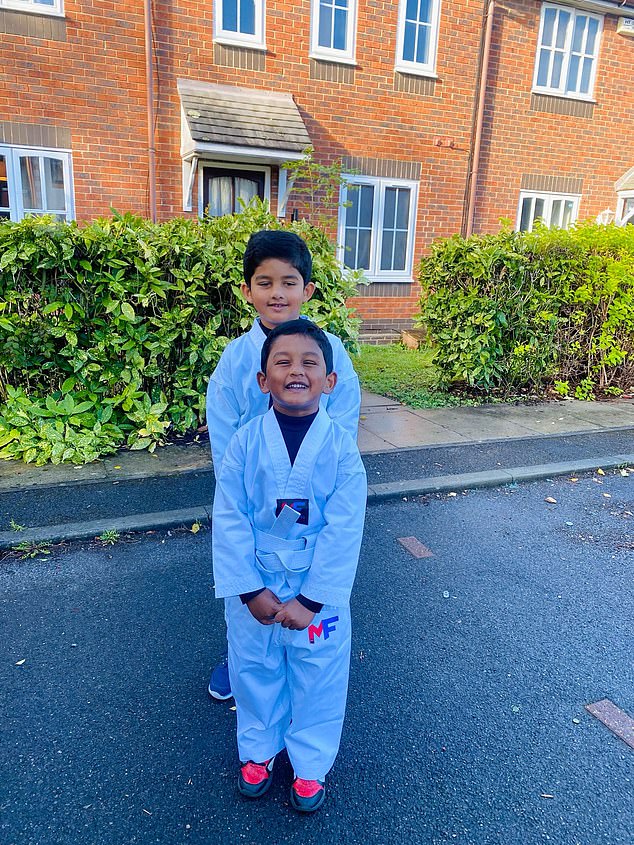 Saashwat’s parents have encouraged their son to join karate, gymnastics and singing classes to boost his social skill set. Pictured: Saashwat with his older brother Niyyanth

Mr Ramarajen said that Saashwat often gets bored at his nursery in Reading and waits for his older brother – in year two at the same school – to get home so he can study his notes.

Saashwat’s parents say they are ‘very proud’ of their son. ‘We want to give him that focus and those opportunities which are very prevalent in UK so he can develop skill sets and become something he wants to be,’ Mr Ramarajen said.

‘It’s very exciting, there is a world of opportunities he can explore and with the right mentoring that he is getting along with the psychologist we are working with and the school, he will be definitely a big asset for the UK in the future.’

Mr Ramarajen said his son sees the world in numbers which they find very fascinating.

They are also trying to engage him in activities such as karate, gymnastics and singing so that he can continue to build his social skill set too.

Saashwat’s parents initially thought that their son was just a very fast learner and ‘did not take it too seriously’ until he was around one-and-a-half and had a serious hobby to sit and read books. 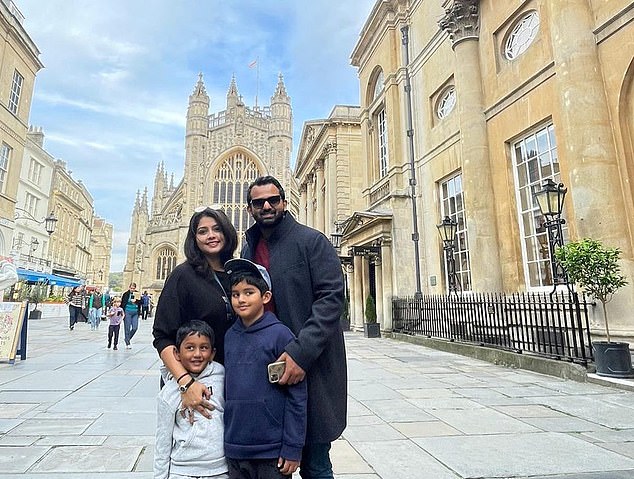 Mr Ramarajen (pictured with family in Bath) told MailOnline: ‘It’s very exciting, there is a world of opportunities he can explore and with the right mentoring that he is getting a long with the psychologist we are working with and the school, he will be definitely a big asset for the UK in the future.’ 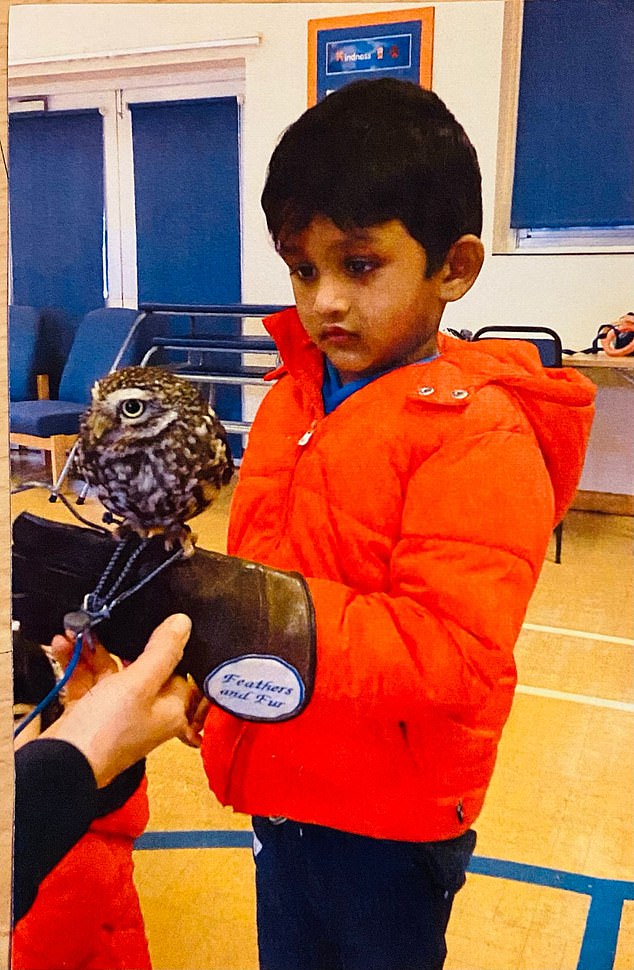 Their older son, Niyyanth, is also going to take a test in hopes of joining Mensa when he turns eight because he too is showing advanced learning skills.

‘Mensans’ have ranged in age from two to 100 but most are between 20 and 60. Mensa was founded in England in 1946 by a barrister named Roland Berrill, and Dr. Lance Ware, a scientist and lawyer.

Their aim was to create a society that is ‘non-political and free from all racial or religious distinctions’.  Today it has around 145,000 members worldwide and around 20,000 in the UK.

The only requirement for membership of Mensa, which means table in Latin, is an IQ score measured in the top two per cent of the population, using a recognised IQ test.

For those under ten-and-a-half, this can be done independently because Mensa only license tests to children older than that.

What is Mensa? The high-IQ society with 145,000 members worldwide

British Mensa has more than 20,000 members from all walks of life with IQs in the top two per cent.

The average adult has an IQ of 100, while a score above 140 is considered to be that of a genius.

The Cattell III B has 150 questions which assess comprehension through passages of texts.

The only way to join is to prove your IQ.

Mensa’s members use the society to share their knowledge and interests with like-minded people.

It was founded in 1946 in Oxford by Lancelot Lionel Ware, a scientist and lawyer, and Roland Berrill, an Australian barrister.

The only requirement for membership of Mensa, which means table in Latin, is an IQ score measured in the top two per cent of the population, using a recognised IQ test.

For those under ten-and-a-half, this can be done independently because Mensa only license tests to children who are older than that.