Four in five workers are now saving into a pension, compared to fewer than half a decade ago, new figures from the Office for National Statistics show.

Since 2012, employees are automatically enrolled into pension if they earn over a certain amount. That is currently £10,000 a year, although those earning more than £6,240 can request to be added.

Currently, the minimum employee contribution is 5 per cent, with employers adding 3 per cent.

However, one expert warns that millions of workers face a ‘retirement disaster’ by contributing as little as required via auto-enrolment, while some could be tempted to opt-out because of the cost-of-living crisis.

Increase: The proportion of people saving into a workplace pension has increased

The ONS figures also show the average public sector pension pot stands at around £65,400, against £10,300 in the private sector.

‘Differences in pension type by sector may explain disparities in estimates of average-active workplace pension value in 2018 to 2020’, the ONS said.

At present, around 39 per cent of private sector employees contribute to defined contribution pensions, up 2 percentage points since April 2020.

In the public sector, around 82 per cent of employees contribute to defined benefit pensions, up 2 percentage points since April 2020.

Most employees, however, are signed up to a defined contribution scheme, where the saver and their employer pay each month into a fund or selection of funds.

Tom Selby, head of retirement at AJ Bell, thinks millions of workplace pension savers could be sleepwalking into a ‘retirement disaster’.

He said: ‘Even those covered by auto-enrolment are at serious risk of retirement disappointment.

‘A 30-year-old contributing at the minimum until state pension age who spends their 25 per cent tax-free cash might only be able to enjoy a drawdown income of around £10,000 a year until their mid-90s.

‘Someone earning £30,000 a year who is first auto-enrolled on their fortieth birthday on the same terms faces an even bleaker retirement, with their fund potentially delivering an income of just £5,500 a year until their mid-90s.’

Selby broke down his calculations as follows:

Selby also flagged the plight of the self-employed when it comes to pensions.

He said: ‘Millions of self-employed workers remain entirely excluded from auto-enrolment, with many saving little or nothing for retirement.

‘This is the section of the labour market most at risk of retirement penury, with no specific plans currently in place to help them.

‘To put it bluntly, as things stand self-employed workers are like the Titanic, unwittingly on a collision course with a giant retirement iceberg. Without urgent action, this will become the next pensions disaster in the UK.’

Since auto-enrolment was introduced in 2012, the proportion of private sector workers saving in a workplace pension scheme has more than doubled from 32 per cent to 75 per cent.

Spanning public and private sector pensions, the total number of workers putting cash in a pension stood at 79 per cent in April 2021, representing 22.6million workers, the ONS said. This compares to 78 per cent in 2020.

The ONS said the uptick in the proportion of people saving into a workplace pension was, in part, driven by an increase in the number of people taking on public sector jobs during the pandemic. 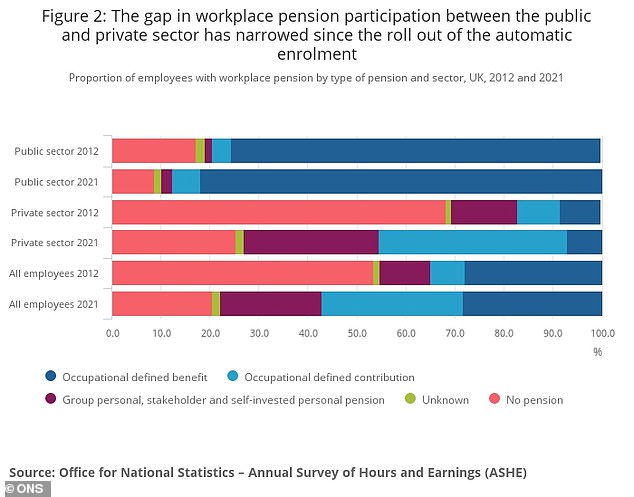 Data: The gap in workplace pension scheme participation in the private and public sector has narrowed, but pot sizes still vary significantly

In April 2021, workplace pension participation was the lowest for private sector full-time employees earning between £100 to £199 per week.

In the private sector, the likelihood of having a workplace pension increases with earnings, the ONS said.

Those earning around £600 or more a week have the highest workplace pension participation level at 89 per cent, representing a similar rate to those earning the least in the public sector.

Becky O’Connor, head of pensions and savings at Interactive Investor, said: ‘If we want more people to be less dependent on the state pension in retirement, it would help if the boundaries around auto-enrolment participation are relaxed.

‘The disparities between public and private sector pension provision must also be urgently addressed.

‘There is significant pension inequality between employees who are employed by the public sector with defined benefit schemes and those with defined contribution schemes in the private sector.

‘This is already apparent among current retirees, who have vastly different living standards depending on who they used to be employed by.’

The fresh ONS data also revealed that workers who are not eligible for auto-enrolment, including low earners and young staff, are significantly less likely to contribute to their workplace scheme, according to the findings.

Millions of self-employed workers are also not catered for by auto-enrolment at all, with sizeable numbers having little or no pension wealth. 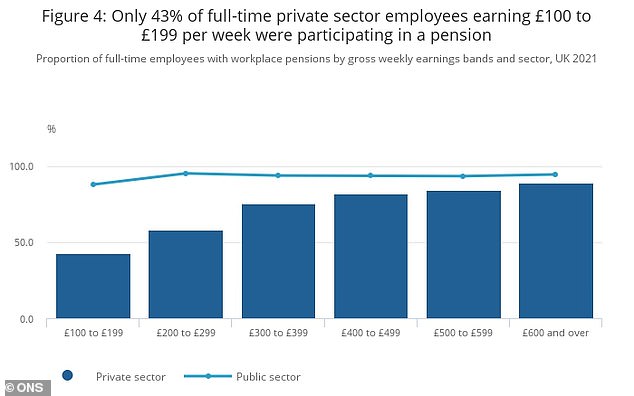 Tough times: Lower earners in the private sector are among the least likely to contribute to a workplace pension 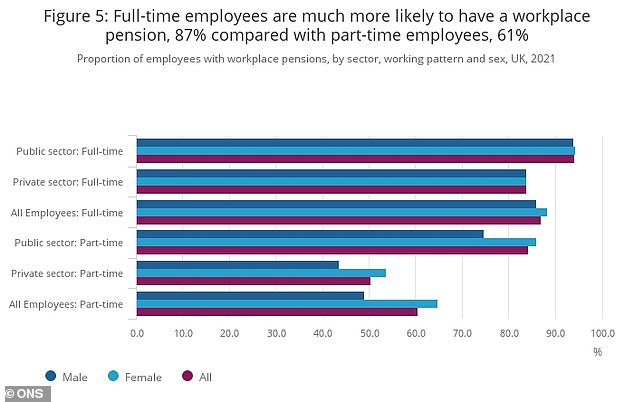 Stats: Part-time workers are less likely to contribute to a workplace pension than full-timers

Workers in the accommodation or food services fields are the least likely to contribute money towards a workplace pension, the findings added. However, both fields of work have seen a hefty rise in the number of people joining workplace pensions since auto-enrolment rules kicked in back in 2012.

Looking at gender, in April 2021, across all working patterns, workplace pension participation levels were almost equal, at 80 per cent for men and 79 per cent for women.

Jon Greer, head of retirement policy at Quilter, said: ‘Although automatic enrolment has so far proved to be a huge success the real test has begun.

‘The cost-of-living crisis that many are only just starting to feel will stretch finances in a way many have not experienced before.

‘People may choose to opt out of funding their retirement in a bid to have more money in their pocket today.

‘Although this is understandable, saving for your retirement should be one of the last things you stop doing if money is tight and reducing day to day spending, if possible, should be adopted before any potential.’

How to make the most of auto-enrolment

While auto-enrolment has helped many workers save cash into a workplace pension, Adrian Lowery, a personal finance expert at BestInvest, believes it is vital for people not to rest on their laurels.

He has outlined three crucial questions everyone signed up to auto-enrolment should ask themselves:

It is easy for younger workers to just go along with the statutory amount, when they could be shoring up their financial well-being by upping their pension contributions.

Anyone who is not contributing up to the level that their employer is prepared to match should consider raising their percentage to take advantage of this generous uplift.

2. Have you checked your funds?

The vast majority of employees are enrolled in defined contribution schemes, where the saver and their employer pay each month into a fund or selection of funds – which in turn will hopefully grow over the long term into a pot that will help to fund retirement.

It is therefore up to the saver to get under the bonnet and make sure that their investments are suitable and working hard for them.

Younger workers can if they wish choose slightly higher risk options with more growth potential as they have decades to ride out stock market volatility.

3. Where are all your pots?

It has always been the case that workers have collected pensions as they move jobs, but never more so than in the 10 years since auto-enrolment was introduced.

And many young employees of today are likely to end up with a real haul of multiple pots by retirement age if they do nothing. In the worst-case scenario, one could lose track of some of these and end up many thousands of pounds out of pocket.

The Association of British Insurers has estimated that about 1.6million pension pots worth nearly £20billion have been lost, often because people moved house and forgot to let their pension provider know.