Speaking to Fox and Friends on Monday, Cain said he loves Captain America and the concept of the American super-soldier, ‘but I m so tired of this wokeness and anti-Americanism.’

‘We just celebrated our 245 birthday,’ Cain, who donned a red cape in DC’s ‘Lois and Clark: The New Adventures of Superman,’ continued.

‘In my opinion, America is the greatest country in history,’ he said. ‘It’s not perfect. We are constantly striving for a more perfect union, but I believe she’s the most fair, equitable country anyone’s ever seen, and that’s why people are clamoring to get here from all over the globe.’

‘I agree with Sen. Tom Cotton, who was on a couple of days ago,’ he said, ‘who said that perhaps the captain needs to be demoted to lieutenant, because I think it makes good sense.

His comments come in response to a new Captain America comic book, ‘The United States of Captain America,’ which has come under criticism for the titular character claiming the American Dream doesn’t exist.

Speaking to Fox and Friends on Monday, actor Dean Cain said he is ‘tired of this wokeness and anti-Americanism’ in response to a new Marvel comic in which Captain America says the American Dream isn’t real 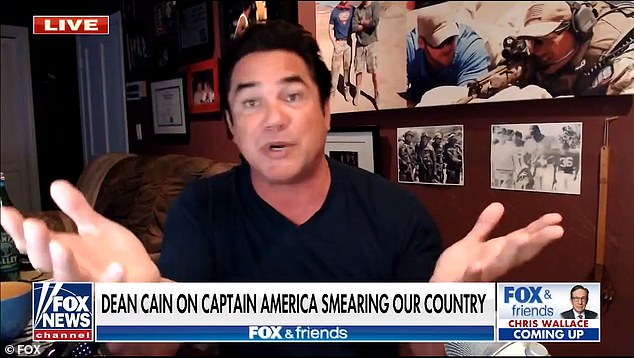 ‘You know America has its founding principles, which I firmly believe in,’ Cain said. ‘I believe in individual freedom, I believe in equality of opportunity – not outcome, competition – the ability to compete fairly, hard work, which brings you material wealth, which in turn gives you self-reliance.

‘And I find this wokeness – it’s pervasive. It goes through everything, it’s in our school system.

‘The cool thing to do today is to bash America,’ he said. ‘The comic books do it, the schools, they indoctrinate our kids they do that, our movies, our television shows are full of it, celebrities, athletes, actors, the media – they love to bash America.

‘I don’t get it,’ Cain told the Fox and Friends hosts. ‘I wonder to myself often – do these people ever travel outside o America? Do they go to where they have to deal with governments who aren’t anywhere near as fair as [the] United States?’

He also said that he has become a ‘revolutionary in some terms’ for supporting the country, ‘which I’m fine with,’ and offered hope that patriotism will return to the mainstream when education once again emphasizes American greatness.

‘I believe the pendulum will swing back to openly appreciating American values, the Constitution, the Bill of Rights, as soon as people start studying them in school again,’ Cain said, according to FOX News. 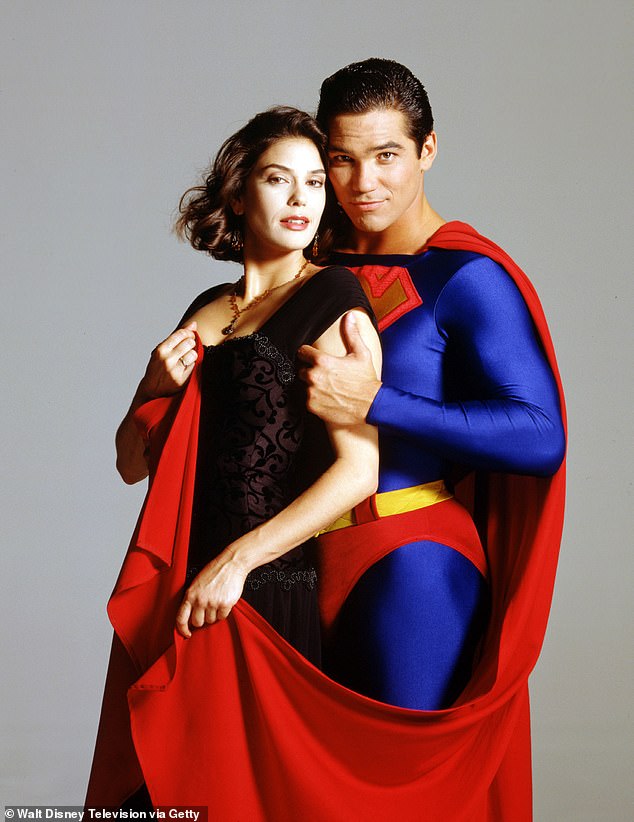 Cain, right, gained fame as DC Comics’ Superman in ‘Lois and Clark: The New Adventures of Superman’ in the 1990s alongside co-star Teri Hatcher 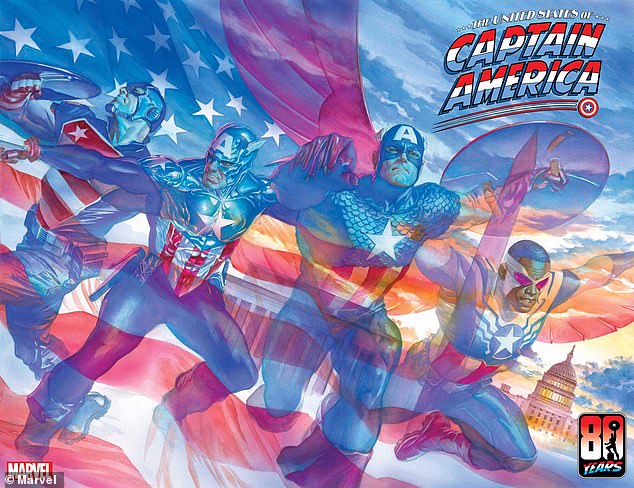 A recent Captain America comic book, ‘The United States of Captain America,’ has come under fire for a segment in which Steve Rogers laments the American Dream

‘I’m loyal to nothing,’ Steve Rogers says in the comic. ‘Except the dream.

‘Here’s the thing about a dream, though. A dream isn’t real.

‘I’m starting to think America actually has two dreams,’ he continues. ‘And one lie.’

‘The first American dream is the one that isn’t real. It’s the one some people expect to just be handed to them. And then they get angry when it disappears. When the truth is, it never really existed in the first place.’

Rogers then goes on to lament the ‘white-picket fence’ dream as he washes his shield.

‘This is the white-picket fence fallacy, that if we’re not careful becomes nationalism. Jingoism,’ Rogers says. ‘That dream isn’t real because it never was. Because that dream doesn’t get along nicely with reality.

‘Other cultures. Immigrants. The poor. The suffering. People easily come to be seen as “different or un-American,”‘ he says. ‘The white picket fence becomes a gate to keep others out.’

‘We’re at our best when we keep no one out,’ he continues. ‘A good dream is shared. Shared radically. Shared with everyone.

‘When something isn’t shared it can become the American lie.’

At another point in the story, the Washington Times reports, a character standing next to Steve Rogers, a white man, suggests that Sam Wilson, a black character, is more representative of all Americans.

‘Wow, Sam Wilson,’ the character says, according to the Times. ‘Two Captain Americas for the price of one.

‘I can’t tell you how much it means to meet both of you,’ he says. ‘You fight for everyone, I mean everyone.’

The comics giant had previously riled conservatives in February 2010, when it pitted Captain America against ‘Angry White folks’ at an apparent Tea Party rally, the Times reports.

It called the movement ‘a grassroots anti-government army’ that ‘looks like some kind of anti-tax thing,’ according to NewsBusters.

A lewd message related to Tea Party activists was reportedly removed from future printings of the book, and was blamed on ‘someone in lettering and production.’