Former Celtic scout David Moss has revealed how close the club came to snapping up on-loan winger Jota for a knockdown fee as a teenager.

The 22-year-old has impressed on a season-long loan from Benfica, scoring six goals in 15 appearances and winning the cinch Premiership Player of the Month for October.

Celtic are now facing calls from fans to pay the £6.5million it would take to sign the Portuguese wide man on a permanent basis.

A Lennoxtown scout for seven years, however, Moss has revealed how he travelled to Lisbon for talks with the player and his parents over a £200k deal before Benfica stepped in with a contract.

‘Helena Costa was a scout at Celtic for a long time and very good at her job,’ said former Falkirk and Dunfermline midfielder Moss.

‘She coached Jota at the Benfica academy from when he was eight or nine years old and she recommended him to Celtic when he was around 16.

‘I was scouting for the Celtic academy when she said to me: “David, you need to try and sign this winger before he signs a contract with Benfica”. 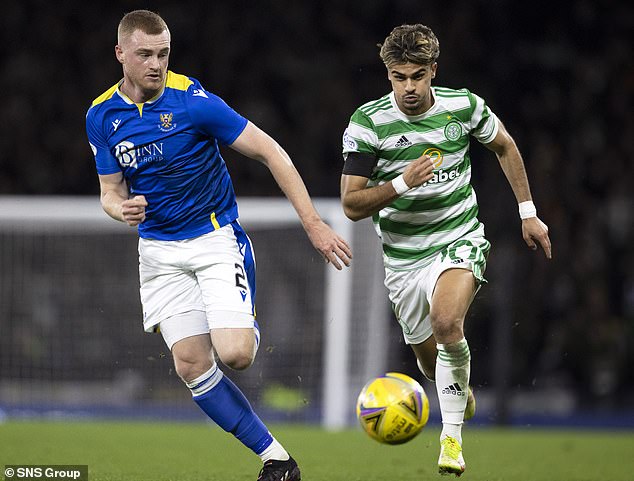 Celtic face paying £6.5m to sign the 22-year-old on a permanent basis from Benfica

‘I went over there a few times to watch him and met him and his parents.

‘For whatever reason, I just don’t think Celtic were in a position back then to go and spend £200k or whatever the fee would have been to take on a teenage player with no first-team experience.

‘I am still in touch with Jota’s dad Pedro now. He invited me up to the hotel when he first signed on loan with Celtic.

‘I couldn’t make it up because I was away, but next time we’re both in Glasgow we plan to meet up.’

A former Head of Football Operations at Huddersfield, Moss is now an agent with young clients at both Celtic and Rangers.

The agent who took former Parkhead youngsters Liam Morrison and Barry Hepburn to Bayern Munich, he believes his old club should waste no time in paying the fee to make the Jota deal permanent to avoid missing out on the player for a second time.

‘I haven’t seen every game Jota has played but he is a player Celtic should try to sign,’ said Moss. ‘Clubs down south will definitely be sitting up taking note of his form now.

‘His strength is his technique. He is a typical Portuguese winger with creativity.

‘The good thing about him is that he has always scored goals and produced an end product.

‘He is not a winger who has no outcome. Helena always said he had an end product.’