EXPRESS INFORMER > Sports > Former players slam AFL for being inconsistent on umpire dissent, with images showing they are right

Garry Lyon has led a chorus of former players and analysts in calling for greater clarity and consistency surrounding the AFL’s crackdown on umpire dissent.

It comes after Brisbane player Harris Andrews gave away a 50-metre free kick in the Lions’ clash with Collingwood last Thursday for questioning an umpire’s decision with his arms held out.

While the crackdown was announced and enforced during the pre-season, it fell away in the opening rounds until the Andrews incident. Then, bizarrely, a number of players escaped punishment despite doing the exact same thing.

‘[The crackdown on dissension] went from zero tolerance to five per cent then to about 15 per cent and now they go back to zero tolerance,’ Lyon said on Fox Footy.

‘That‘s why players and fans get annoyed. If you keep it at zero tolerance, Harris Andrews doesn’t go there.

‘That’s why they get frustrated.’ 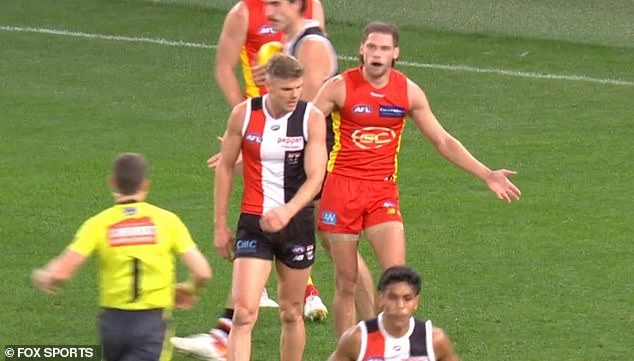 Max King kicked a controversial goal against the Suns after appearing to push Jy Farrar away from the contest. He put his arms out at the umpires but didn’t give away a free kick

Brisbane Lions legend Jonathan Brown said there cannot be ‘any room for interpretation’ in the ‘black and white’ rule, which should be moved back towards zero tolerance for umpire dissent.

There were many notable incidents following the Lions v Collingwood match where players held out their arms to the officials but did not get punished.

St Kilda players were seen remonstrating with the umpires with their hands out on multiple occasions.

Suns player Jy Farrar looked to have received a push in the back from St Kilda forward Max King and walked right up to the umpire with his hands out, yet there was no whistle.

Carlton’s George Hewett also marched toward the umpire with his arms out after he attracted a whistle for holding the man on Dan Houston, but no 50 was issued.

‘A 50m penalty against Hewett for putting his hands out would have been handy on a weekend it was made clear it was definitely something to be penalised,’ Herald Sun journalist Jon Ralph tweeted. 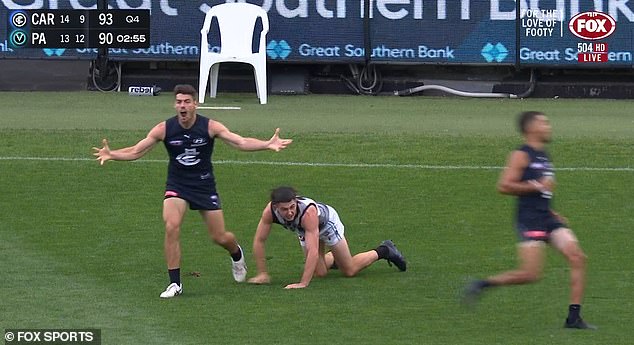 There was little doubt that Hewett was remonstrating with the officials after being ruled to be holding the man. If he surrendered a 50, Port could have kicked the match-winning goal.

Former Port star and analyst Kane Cornes pointed to numerous incidents of players putting their arms out during round five.

‘I could have found 20 of them … it’s one of those grey areas in the game we have to get out,’ he said on Channel Nine.

Former Brisbane Lion and current Seven commentator Luke Hodge said there needed to be consistency after the Andrews incident.

‘They brought it in for the first weekend of the pre-season games and the umpires were so hard on it, but then players have been able to get away week-in, week-out,’ he said.

‘That looks like he just turned around to talk to the umpire, so if they’re gonna do it, they need to be firm on everyone.’