Bafta and International Emmy award-winning editor Ms Griffiths has more than 25 years’ journalistic experience, having previously led teams at Newsround and the World at One.

She previously worked for the Today programme for nine years.

Sarah Sands will be replaced as editor of the Today programme after the summer, the BBC revealed on Tuesday

She previously worked for the Today programme for nine years.

Ms Griffiths said: ‘Perhaps rather embarrassingly, the Today programme has been a part of my life since I first started listening at university.

‘I learned so much about journalism when working there as a producer and it is a huge privilege to be asked to return as editor. 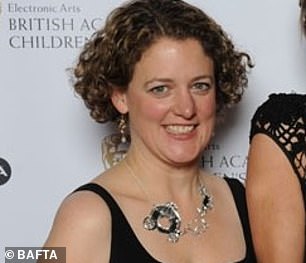 ‘I’d like to thank Sarah Sands for handing on a programme in such good shape and look forward to getting stuck in after the summer.’

A BBC spokesman said yesterday: ‘Owenna’s successful editorship at the PM programme has included in-depth analysis from across the UK during the 2019 General Election, the recent Covid Chronicles, where listeners have shared their own experiences of the pandemic, and the award-winning seven-part series Anatomy Of A Stabbing.’

The appointment comes just weeks after it was revealed the BBC had demoted its editor position to a ‘toothless’ new ‘executive’ role with less power to set the news agenda.

It comes amid plans to cut the number of live political interviews on the morning broadcast as part of the corporation’s plan to save £80 million.

‘I’m confident she and the team will take our flagship programme from strength to strength. I’d also like to thank Sarah Sands for all that she’s done over the past three and a half years.

‘Under her leadership the programme has expanded its coverage to explore a range of new subjects and seen guest editors from the Duke of Sussex to Greta Thunberg.’

Last month The Telegraph reported that Ms Griffiths was one of a number of internal candidates that included Richard Frediani, executive editor of BBC Breakfast; Adam Cumiskey, chief programme producer on Newsnight; and John Neal, editor of The Andrew Marr Show.

Mohit Bakaya, Controller of BBC Radio 4, says: ‘Owenna is a brilliant editor, who combines her terrific journalistic instinct with a rare creative imagination.

‘At the helm of both the World at One and later PM, Owenna has thought hard about how to unlock politics for the Radio 4 audience, as well as find interesting ways to engage listeners and explore the forces that shape the world around us. I know she will bring the same qualities to her editorship of Today.’

Owenna will take up the role in early September and her successor as editor at PM will be announced in due course.

Ms Sands announced she was stepping down as editor of Today back in January, in the wake of the BBC’s decision to cull 450 jobs in the corporation’s news department under plans to complete its £80m savings target by 2022.

In an email to staff, Sands, a former editor of the Evening Standard said she ‘comes from a different world’ but added that she was ‘proud’ of what the Today programme had achieved under ‘constant pressure’.

Although there is no indication the recently announced cuts will affect the Today programme, friends of the journalist said she had decided to step down in protest at the prospect of huge job losses around the corporation.

‘She could not bear working through years of job losses so decided to give up hers first,’ one said.

And in an email to staff, seen by The Guardian, she said: ‘I have decided that September is a good time to move on and pass this job to someone else. I loved Radio 4 as a listener, I loved it even more as a member of the team.

‘But I come from a different world and I was never going to be a lifer. I am so proud of what we have achieved, championing intelligent broadcasting and political independence, under constant pressure.

‘I have witnessed not only extraordinary professionalism and quick-witted determination here but also a heart-warming consideration towards one another.

‘The Today programme is a beacon of news journalism. It was, is, will always be, the most precious programme at the BBC.’