A former Ms South Carolina was forced to carry an unviable fetus for seven weeks when her state outlawed abortions following the overturning of Roe v Wade.

Jill Hartle, 35, said it felt like a ‘dagger to the heart’ every time strangers would approach her and say she ‘looked amazing’ and asking when the baby was due.

Most baby’s born with the condition die within days and are in terrible pain, meaning they need to be heavily sedated.

At the time South Carolina had just introduced a six-week abortion ban which forbid abortions except in cases of rape, incest or danger to the mother.

The 2013 Ms Carolina contestant had to fly 500 miles to Washington D.C. while pregnant to get the termination at week 25.

She said she spent seven weeks in ‘excruciating pain’ physically and emotionally while she carried the fetus in the lead up to the abortion date.

Ms Hartle said: ‘Every time I felt her move was like a dagger to the heart.

‘And the mental toll — I was grieving the loss of my child while still carrying her and also waiting to be taken care of so that I could start the healing process.’

She has revealed her story to put pressure on the state — with one of the harshest abortion limits in the country — to ease its laws.

HLHS is normally diagnosed at about week 18 to 20 in pregnancy. It cannot be detected earlier because the heart has not properly developed.

Jill Hartle, 35, who lives in Charleston, said it was the ‘most excruciating’ period of her life the seven week wait until she could get an abortion. She is pictured in 2013 after winning the Ms South Carolina competition 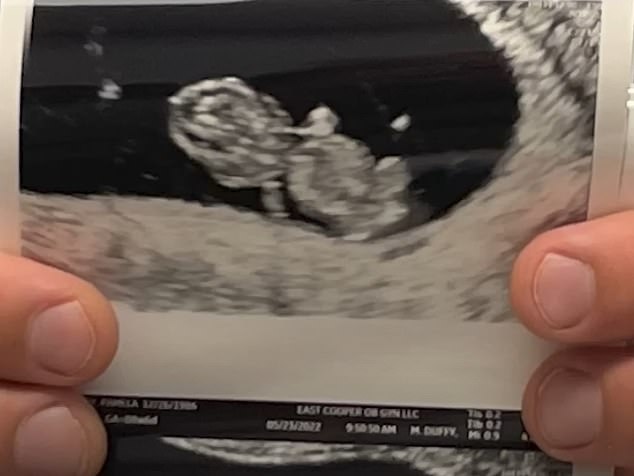 Her baby — Ivy Grace — had no issues in early scans (pictured above early in the pregnancy). But by week 18 doctors became concerned about her heart, and eventually diagnosed her with Hypoplastic Left Heart Syndrome (HLHS). Most babies don’t survive with this beyond four days after being born 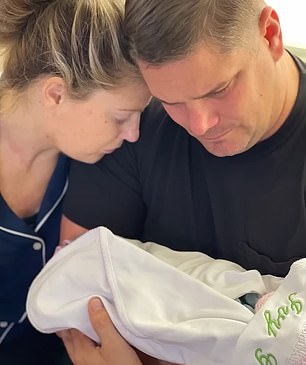 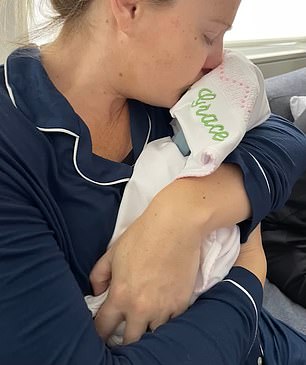 Because South Carolina bans abortion from six weeks, Ms Hartle had to travel 500 miles to Washington DC to get the procedure. She flew to the city. Ms Hartle is shown above with husband Matt and baby Ivy Grace after the pregnancy was terminated

With tears in her eyes, Ms Hartle said while she was waiting for termination she had many women coming up to her saying she looks great and asking when the baby was due

Ms Hartle was thrilled to find out she was pregnant in April this year — about a year after tying the knot with Matt, and was given a due date of this December.

In a video showing the moment she got the result, the hairdresser is seen jumping for joy clutching the positive test and clasping her mouth with her hands.

Scans at eight weeks and again at 12 weeks suggested the infant was developing normally and there were no problems.

What is Hypoplastic Left Heart Syndrome?

Hypoplastic Left Heart Syndrome, or HLHS, is a severe and incurable heart condition.

Patients have an improperly formed left side of the heart, leaving it unable to pump blood properly.

Normally the left side of the heart sends blood to the body while the left sends it to the lungs.

But in HLHS the deformity means this system breaks down.

About one in 3,000 babies born in the US have the defect.

When is it diagnosed?

Most diagnoses are made around weeks 18 to 20 of pregnancy.

But it can be spotted as early as 16 weeks. In some cases, the condition is not revealed until the baby is born.

The delay is because the baby’s heart is initially too small for the condition to be detected on scans.

What are the treatment options?

There is no cure for the condition.

Babies with it are offered three operations within the first two years of life to help them live normally.

At week two of life they are offered the girst procedure, which makes the right ventricle pump blood to both the body and the lungs.

At four to six months they have the second, which sees blood vessels shifted so the heart only pumps blood to the body — re-routing that from the lungs.

At about two years old, they have the third operation. This re-routes all blood coming from the body to the lungs.

In many cases infants will also need a heart transplant, which will then need to be replaced every 10 to 12 years.

How long do children live with the condition?

Most die within two weeks, doctors say, with an average age of just four-and-a-half days.

For the nine per cent that live beyond 30 days, they can live a relatively normal life into their thirties.

Without surgery infants with the condition can survive up to 60 days.

How many children have HLHS?

One in every 3,000 babies has the condition in the US, estimates suggest.

It is not clear what is behind the condition, but it is thought to be linked to genetic factors.

Having a child with the condition raises the risk of having another that also suffers from it.

But at week 18 doctors raised concerns over the fetus’ heart.

Twenty-eight days later they diagnosed the unborn child with HLHS.

This is where the left side of the heart does not form properly, leading to the left ventricle — one of four heart chambers — being too small.

Normally, the right side of the heart pumps blood to the lungs while the left sends it to the body. In HLHS, however, oxygen-rich blood struggles to get to the rest of the body.

About 60 to 80 per cent of fetuses diagnosed with HLHS are terminated due to the risks and low quality of life.

Talking about the diagnosis in a video, Ms Hartle said: ‘My stomach sank because I knew how bad that could be and I knew what it meant.

‘The doctor said: “Her heart is not what we want it to look like”. I said: ‘My best friend had a child with HLHS.” And she said: “That’s what we’re looking at.”

Ms Hartle decided to terminate the pregnancy with husband Matt, but had to travel out of state due to South Carolina’s restrictive abortion laws.

Eventually they found a clinic in Washington D.C., but because many women were in a similar position there was a two-week delay.

Ms Hartle had to spend this period feeling her fetus kick while also grieving for the lost youngster.

She said: ‘That was probably the most excruciating two weeks ever.

‘Every two hours I had a women coming into my chair, saying: “Oh my God you look incredible. Are you so excited? Have you picked a day care? Tell me everything!”

‘[But] I knew I had to give her back to God, and then to find out your state cannot take care of you alienates you even more.’

Ms Hartle said it was ‘excruciatingly painful’ needing to travel the 531-miles from her home to Washington DC by air, a one hour flight, and then having to figure out where to stay, how to get food, all while preparing for an abortion.

The pregnancy was terminated at 25 weeks, with Washington DC allowing abortion to be legal at all stages of pregnancy.

Explaining her decision to get an abortion, Ms Hartle said: ‘We decided that the best thing for our particular case and our particular daughter, Ivy Grace, was to just give her the most peaceful possible way to heaven and to be healed and to be free and never feel a moment’s pain.

‘I knew I had to give her back to God. I know in my heart that I am doing the most selfless thing possible.

‘[The abortion] was the hardest day I have ever experienced in my whole life, but it was also the most peaceful day in my whole life. I knew I was giving her the gift of peace.’

She is revealing her story, to support other women and put pressure on South Carolina’s authorities to row back on their abortion restrictions.

The state banned abortions after week six of pregnancy in July. If she had remained in the state she would have been forced to carry the baby to term.

The six-week ban is currently being challenged in the state’s Supreme Court, with campaigners arguing it contravenes the rights of people to make choices about their medical care and bodily integrity.

HLHS is when the left ventricle (right) does not form properly, leaving the heart unable to pump blood around the body properly. It takes at least three operations within the first two years of life to fix, with most babies not able to survive 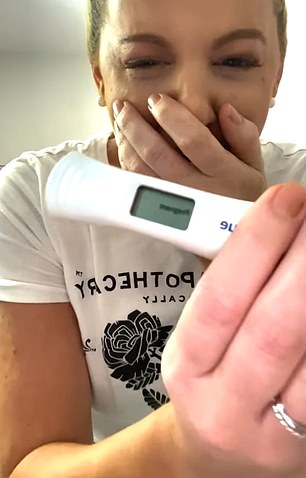 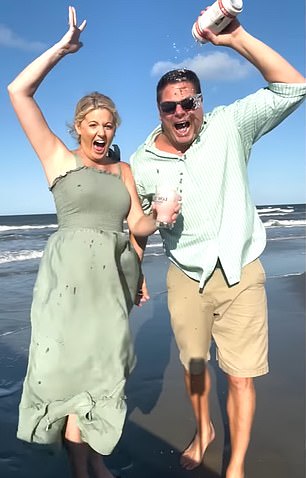 Ms Hartle was thrilled when she found out she was pregnant, and is pictured left with the pregnancy test and right with husband Matt after finding out

Ms Hartle is shown above holding scans of her fetus, who was terminated due to an incurable heart defect

But it cannot be diagnosed until at least 16 weeks, although it is more common for it to be detected at 18 to 20 weeks. The delay is due to the small size of the heart making it difficult to see on scanners.

Dr Natalie Gregory, an obstetrician in Mount Pleasant, said people think abortions are happening later in pregnancy because of the irresponsibility of the mother.

‘When in fact many times these women are remaining pregnant to find out what’s going on with their baby.

‘We have to wait until they grow and develop so we can see what’s going on with their baby.’

Ms Hartle’s friend Lacey whose first pregnancy was also with HLHS said her heart was ‘shot in a million pieces’ when she heard the diagnosis.

In her case — from before Roe v Wade was overturned, she also decided to terminate the fetus.

She has since had two healthy children, which she says would not have been possible if they had continued with the first pregnancy.