Former NFL running back Zac Stacy has been arrested for allegedly assaulting his ex-girlfriend in her Florida home in front of their five-month-old son on Saturday.

Shocking home surveillance footage emerged Wednesday showing Zac Stacy, 30, repeatedly punching Kristin Evans and tossing her into the TV and their son’s bouncy seat, while she begged for him to stop.

On Thursday, Evans pleaded for help in finding Stacy who she suspected was being hidden by his friends.

‘I just want to say thank you, everyone, who has continued to support me in this ordeal. He’s still not apprehended, I don’t know why. His friends are hiding him. Please, if you know anything, contact your local authorities,’ she said Thursday. She also appealed to President Joe Biden and Vice President Kamala Harris for help.

Evans confirmed that Oakland PD had provided security assistance and placed her ‘in an undisclosed location’ while they hunted for her ex.

Later that evening, Stacy was arrested and is currently being held in Orange County Jail, Florida. The former fifth round pick faces two felony charges from the incident of aggravated battery and criminal mischief, according to an affidavit. If convicted, he could face up to 15 years in prison on aggravated battery and up to five on criminal mischief.

Evans, 32, has also filed for a restraining order against Stacy, who played in eight games for the Jets in 2015.

The order claims that Stacy has been abusing her since she was pregnant with her son, with the attacks escalating and no signs of stopping.

Evans wrote: ‘He will not stop. He will kill me and he will feel justified in his actions.’

Zac Stacy (pictured right) is accused of domestic violence against his ex-girlfriend and the mother of his child, Kristin Evans 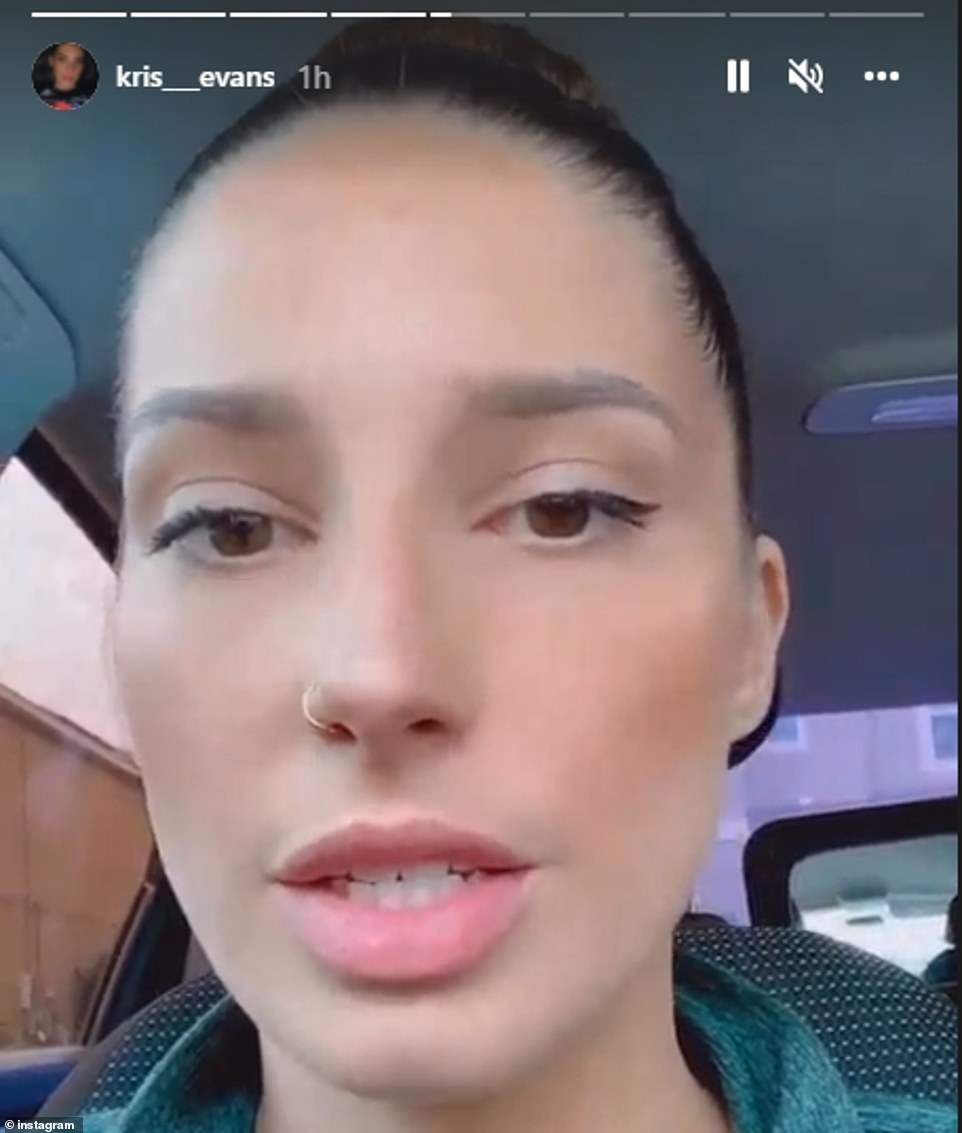 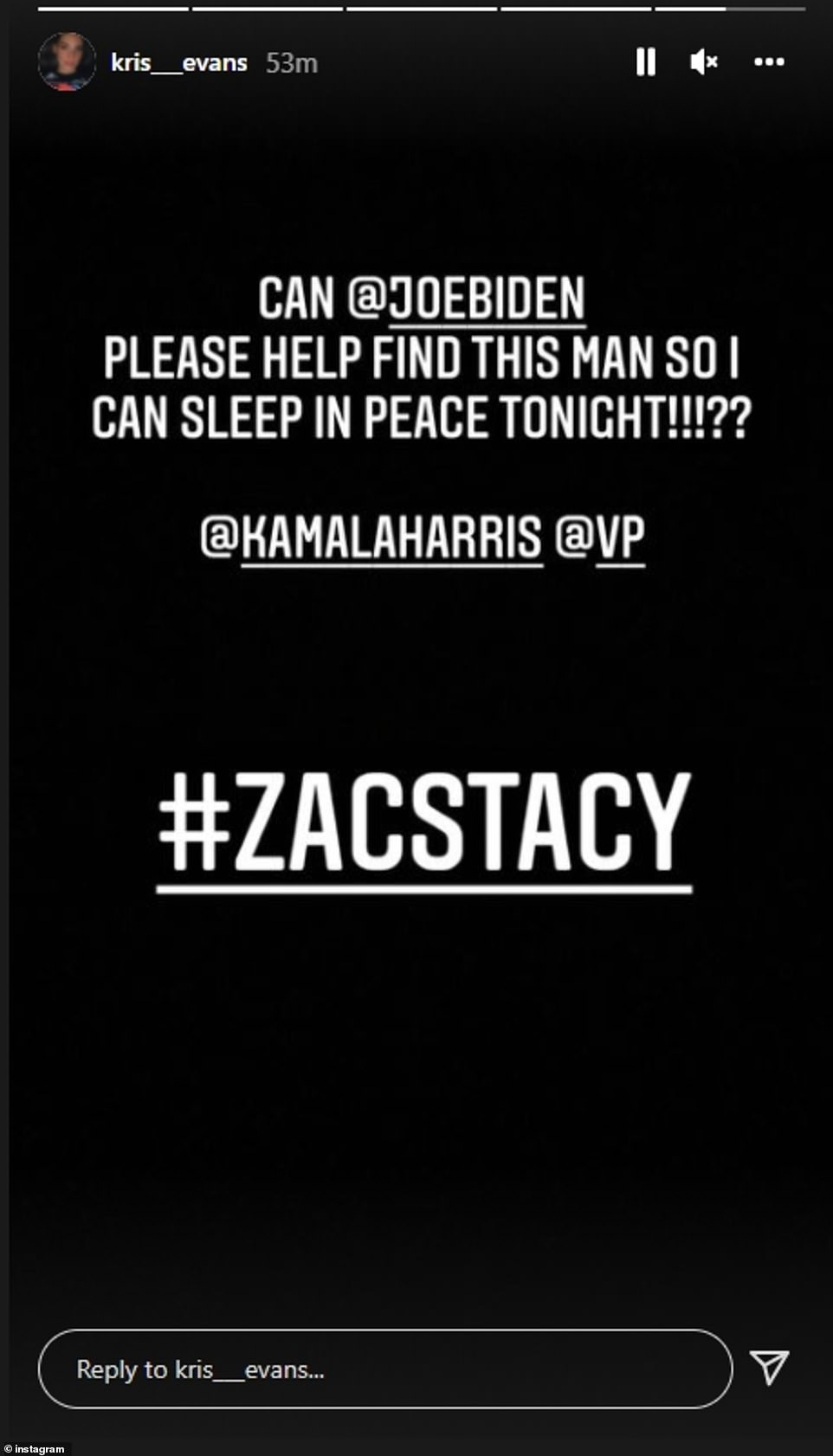 She also revealed that Stacy was ‘voluntarily hospitalized for mental illness’ for a month in March of 2021 and is taking medication for his afflictions.

Speaking to DailyMail.com Thursday, Evans did not think that his football career was responsible for his mental issues but that they may have exacerbated them.

Prior to that, Stacy spent two years with the St. Louis Rams. He last played in the now-defunct Alliance of American Football in 2019 with the Memphis Express. That was when Stacy met Evans, who was a wellness coordinator for the team.

The incident has forced both a prominent college bowl game and the National Down Syndrome Society to sever ties with the ex-running back.

Evans can be heard begging for Stacy to stop in the disturbing video.

Evans claimed on social media Wednesday that Stacy is still on the loose in the Nashville area and that officers in the town of Oakland, where she lives, took four days to issue a warrant.

‘The Oakland PD officers that came to my house didn’t seem to think this was a bad enough incident to make an immediate arrest or to file for an immediate warrant. It took four days of me calling people and an Orange County officer speaking on my behalf,’ she wrote.

In a statement Thursday, Oakland police said that they arrived at the scene by 2:30pm but that Stacy had fled the scene. Officers searched for him while the case was forwarded to an investigations unit in an attempt to establish probable cause for a warrant.

Local and county police attempted to apprehend him but they found he had fled the state. They are urging him to turn himself in and face criminal charges. 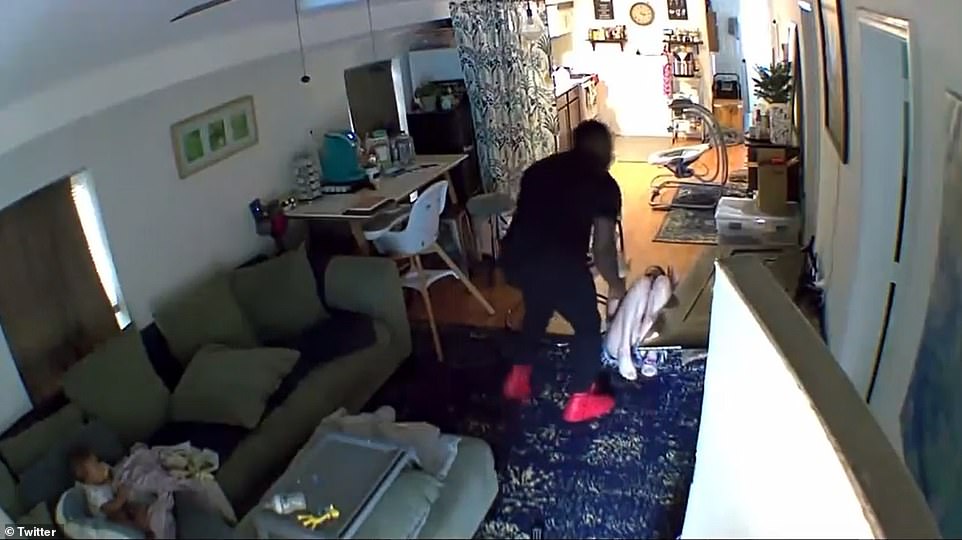 Home surveillance footage shows Zac Stacy, 30, attacking the mother of his child in front of their five-month-old son on Saturday 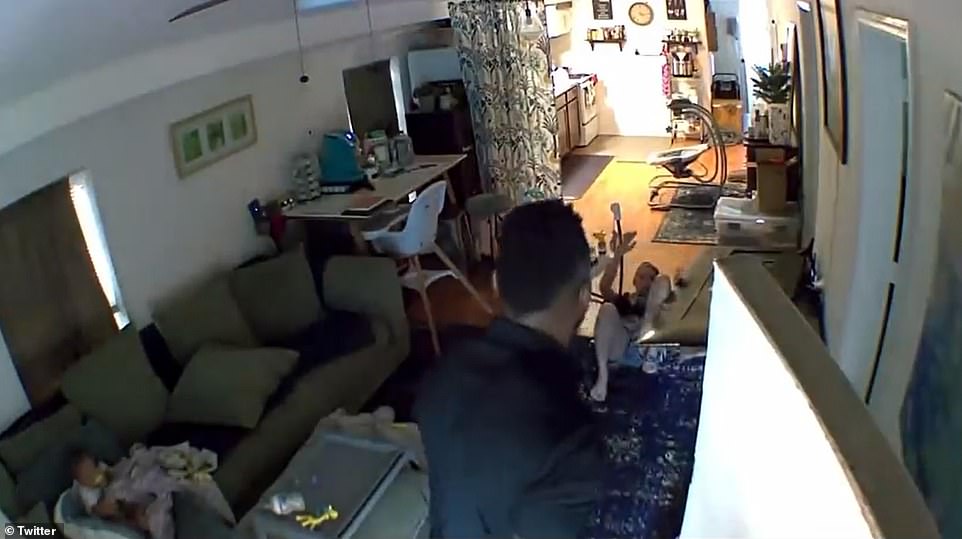 She can be heard begging for Stacy to stop in the disturbing video. 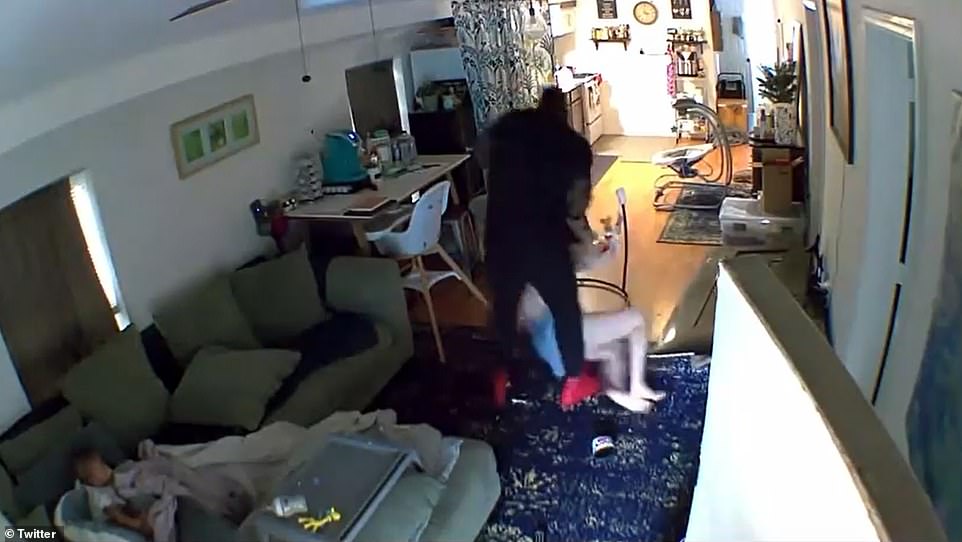 The incident began when the former football player visited his son at his ex’s house at around 2pm on Saturday. But once there, he flew into a jealous rage and attacked his ex, punching her multiple times in the head before dragging her from the couch and throwing her into the TV, which then fell on her

According to a restraining order filed by Evans, the pair met in January 2019 as they worked together in Memphis. They didn’t become romantic until later in the year.

Evans said that at the beginning he was funny, relaxed and they had a lot in common.

Things started to go downhill after they had some difficulties in December 2019, when Evans miscarried.

‘We decided to take some time apart then got back together.’

Evans became pregnant in 2021 and Stacy moved to Florida in April, where he was managing a gym. She said that things have ‘been a roller coaster’ since then.

The incident began when the former football player visited his son at Evans’ house at around 2pm on Saturday. The two had been living apart since August.

But once there, he began addressing her over an incident that took place in September 2020 when she and a financial advisor of Stacy’s met with him out of concern for his mental health issues.

Evans claimed in the restraining order that he flew into a jealous rage and attacked his ex, punching Evans multiple times in the head before dragging her from the couch and throwing her into the TV, which then fell on her.

‘He punched me several times in the head! I begged him to stop because the baby was on the couch just a few feet from where he punched me,’ Evans wrote in her restraining order application.

She added: ‘He then picked me up and threw me into my TV. The TV began to fall and he turned to make sure I wasn’t getting up.

‘As I laid on the floor he began to yell at me, telling me I’m destructive. He then picked me up off the floor and off my feet and body slammed me into our son’s bouncy seat.

‘I fear for my life and my children’s lives,’ Evans – who has a 12-year-old daughter from a previous relationship – wrote in the application.

The victim says that after the attack, Stacy said ‘I love you’ to the baby boy and left before she called 911. 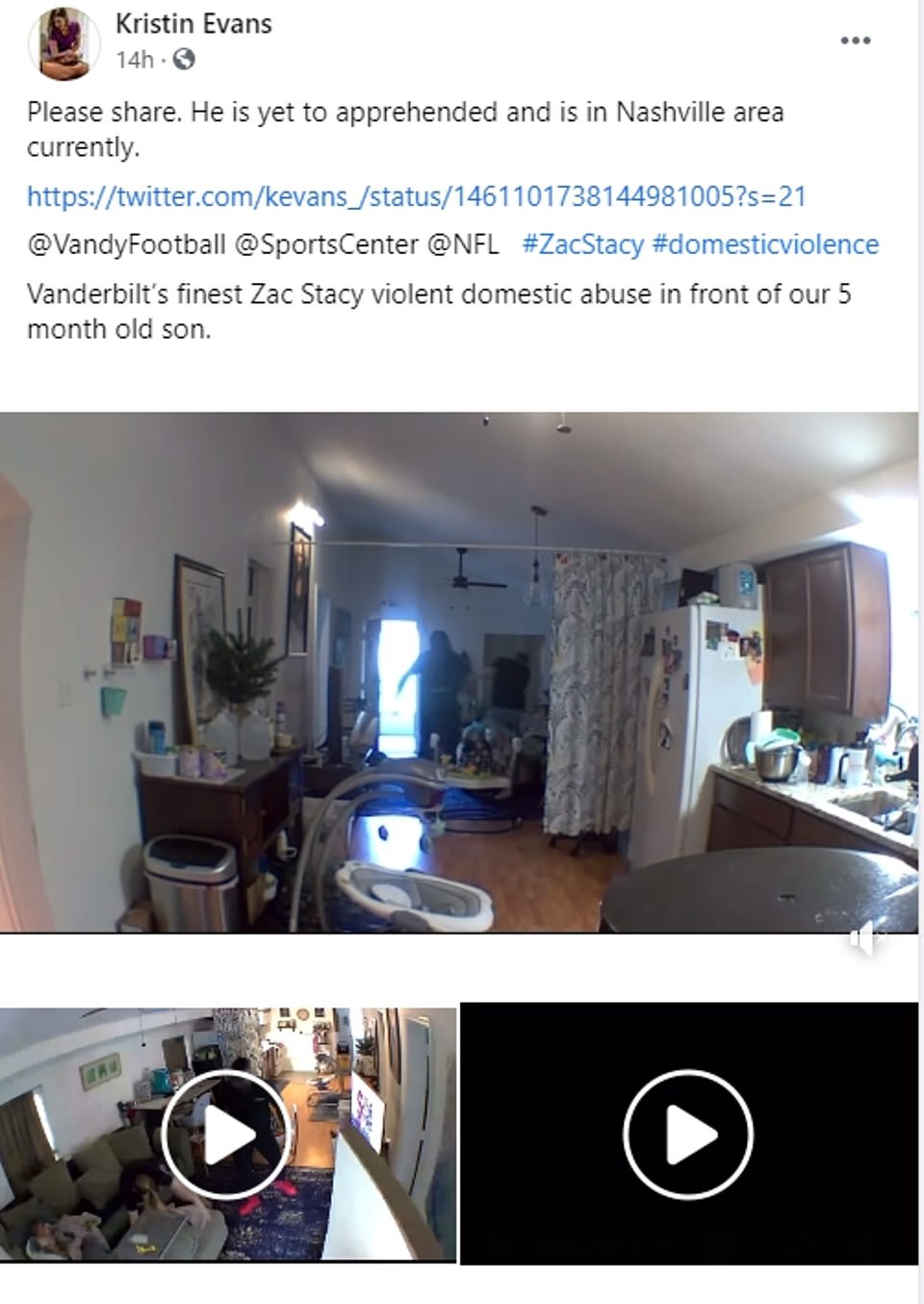 The victim, Kristin Evans, posted the videos herself on social media Wednesday 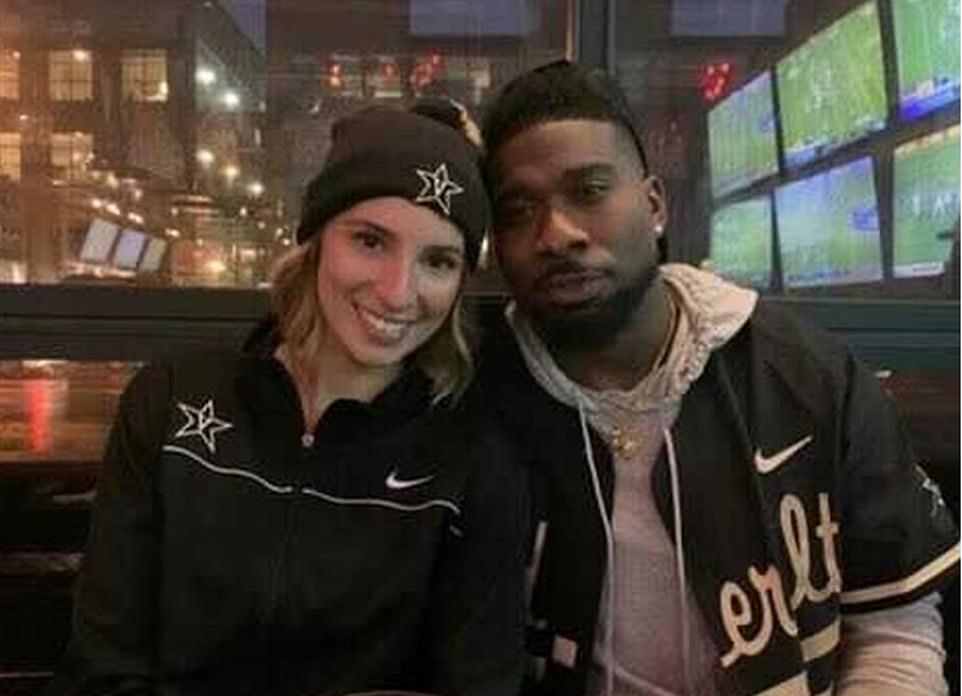 Stacy and his ex-girlfriend Evans

Evans then took herself to hospital where she was treated for a possible head wound and bruising. She said that she couldn’t walk without limping.

The victim previously filed a police report in October when Stacy allegedly slapped her while she was holding the baby for claiming that she’d found out his apartment number at the place he’d moved into after they stopped living together.

She added that he assaulted her several times on August 15 because he wanted money back that he had given Evans for rent.

In that incident, Evans said Stacy punched her legs, slapped her and picked her up and threw her into her window, which broke.

Stacy’s violence, according to the restraining order, extends back to the weeks before their son was born.

When asked why she didn’t file a police report then: ‘Because I’m an abuse victim and I wanted to see the good in him. I wanted to give him an opportunity to get better. I was scared and I was pregnant.’

She has expressed her outrage at Florida police on social media.

‘The Florida justice system has been failing me,’ she wrote. ‘I have filed police reports previously and the State Attorney hasn’t picked them up. Other women fall victim to this everyday. Please call attention to the Florida State Attorney.’

State attorneys are equivalent to district attorneys in the Sunshine State.

In a statement to DailyMail.com, a spokesperson for the Orange and Osceola Counties State Attorney denied that they were being lax on the case.

‘While we cannot discuss any open and active investigation, we can confirm that we have recently received and reviewed an isolated case package in our office,’ the statement said. ‘Unequivocally, the Office of the State Attorney for the Ninth Judicial Circuit is committed to working collaboratively with community and law enforcement partners to end domestic violence in our circuit. This incident has been assigned to our Office’s Domestic Violence Unit and a victim’s advocate has been assigned to communicate directly with the victim. Victims of domestic violence are urged to contact the National Domestic Violence Hotline for confidential assistance from trained advocates at 1-800-799-7233.’

Stacy joined the Jets in 2015 and previously played two seasons for the St. Louis Rams. He broke his ankle that season, limiting himself to just eight games and never again played in the NFL. 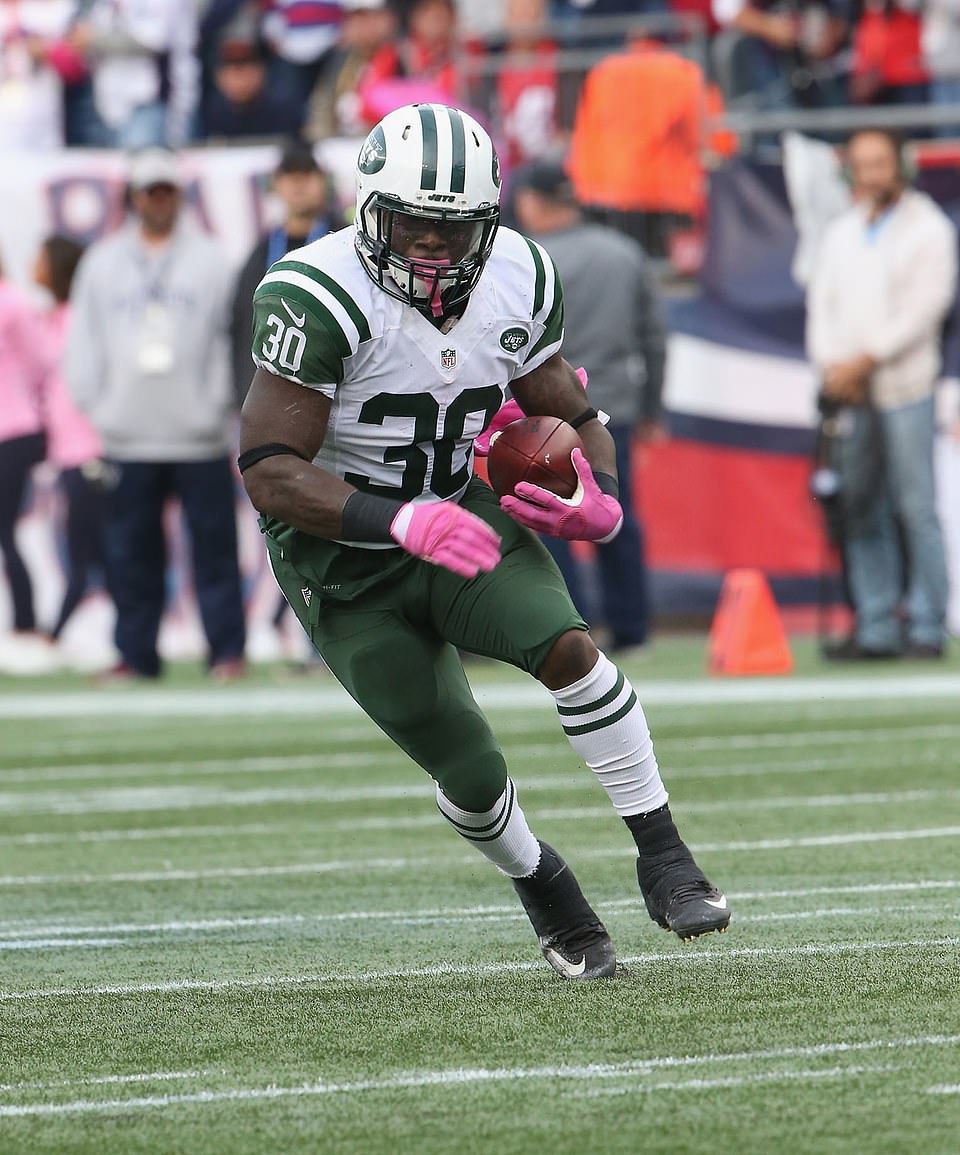 Stacy played just 8 games with the Jets in 2015 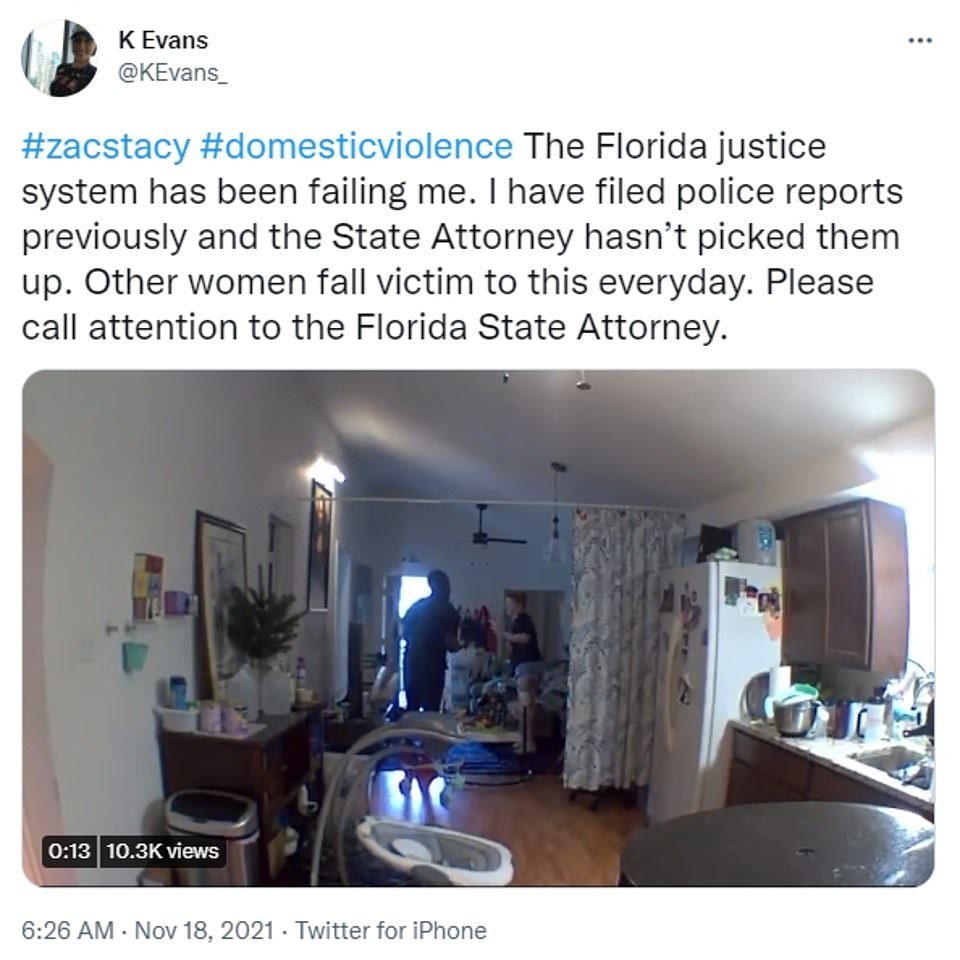 Evans most recently was a ‘youth football ambassador’ for the TransPerfect Music City Bowl in Nashville.

‘Based on the video and domestic violence report regarding Zac Stacy, the TransPerfect Music City Bowl has terminated the relationship with Zac Stacy effective immediately,’ the organization said in a release.

Stacy had most recently given an interview in 2020, claiming his faith played a constant role in his life.

‘I have always been a guy who never really looks at accolades or stats. It has always been about putting my team first, being professional (and giving) glory to God. For any recognition or accolade that I have, He gets all the glory,’ said Stacy in a 2020 interview.

Stacy also promoted his work as an ambassador for the National Down Syndrome Society. The organization released a statement Thursday saying they would not work with him again.

‘The National Down Syndrome Society is horrified by the video of former NFL football player Zac Stacy attacking the mother of his child,’ the statement read. ‘NDSS last partnered with him in 2019 to conduct a football clinic for individuals with Down syndrome and their siblings. We do not have a current partnership with Zac, and we will not renew our partnership with him. This terrible act of violence goes against our core values as an organization. Our support goes to the victim and her family.’

Players across the National Football League weighed in on the situation Thursday.

Green Bay Packers wide receiver Davonta Adams tweeted: ‘I’m not retweeting the video but ZAC STACY NEED TO BE THROWN UNDER THE JAIL. Any man that puts his hands on a woman is a coward. Can’t believe what I just say.’

Retired 2-time Super Bowl champion Chris Long, an ex-teammate of Stacy with the Rams, wrote: ‘Woke up to the Zac Stacy video. Made my stomach turn. Not retweeting. Crazy to play w[ith] someone for a couple years & you have no idea what kind of bulls–t they do at home.’

Former NFL safety Darius Butler was more blunt: “I hope Zac Stacy is somewhere gettin[g] his a– whooped right now! Any man that puts their hands on a woman is a SUCKA in my book.’