A former Green Beret and his son who smuggled fugitive Nissan CEO Carlos Ghosn out of Japan in a speaker box while he was awaiting trial have been sentenced to 44 months in prison in Tokyo.

Michael Taylor, 60, and his 28-year-old son Peter Taylor were extradited by US authorities after being accused of orchestrating Ghosn’s audacious escape.

The pair had pleaded guilty to charges that, in December 2019, they illegally helped Ghosn escape from western Japan’s Kansai airport hidden in a speaker box aboard a private jet via Turkey to Lebanon where there is no extradition treaty with Japan.

Michael Taylor and his son Peter (both pictured), have admitted smuggling fugitive Nissan CEO Carlos Ghosn out of Japan in a speaker box 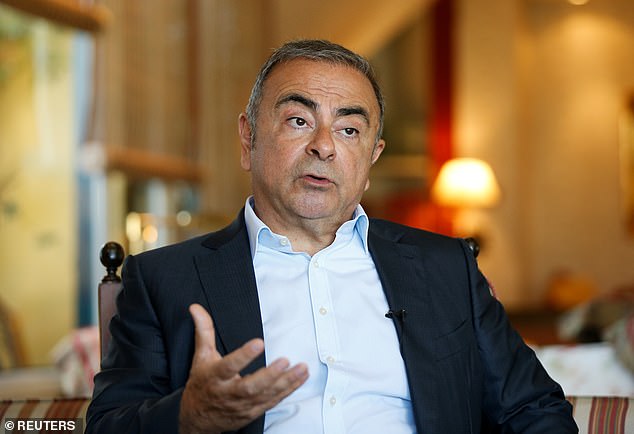 Michael Taylor, 60, and his 28-year-old son Peter Taylor were extradited by US authorities after being accused of orchestrating Ghosn’s (pictured) audacious escape

In handing down the sentencing, Chief Judge Hideo Nirei said they had committed a serious violation of the law, as now there is next to no chance of putting Ghosn on trial because he is living in Lebanon, which does not have an extradition treaty with Japan.

‘This case enabled Ghosn, a defendant of a serious crime, to escape overseas,’ he said.

Although the defense argued the two had been merely used by Ghosn, they clearly were involved, regardless of who was making the decisions, he said.

Ghosn was arrested in Japan in November 2018 on charges of underreporting his compensation and of breach of trust in using Nissan Motor Co. money for personal gain. He says he is innocent, and he left because he could not expect a fair trial in Japan.

The Taylors were arrested in Massachusetts in May 2020 and extradited to Japan in March. During their trial they apologized, saying they had been misled by Ghosn about Japan’s criminal justice system. 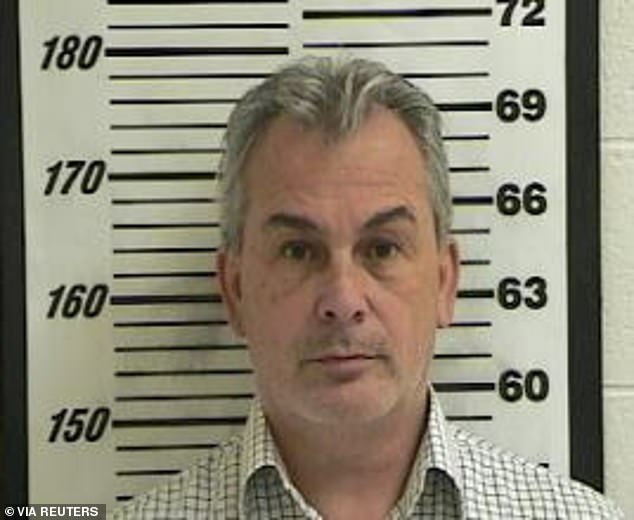 Michael Taylor, pictured in a booking photograph from 2012 on unrelated charges, was sentenced to two years in prison

Michael Taylor sobbed and said he was ‘broke,’ denying they had benefited monetarily because the $1.3 million prosecutors said Ghosn paid them just covered expenses.

But Nirei, the judge, said the court found that the motive was money. The Taylors can appeal within two weeks, he said.

The father and son, both wearing dark suits and flanked by guards, stood before the court in silence.

Michael Taylor had begged the judge to allow him to return to the U.S. to see his disabled father.

He also told the court regretted helping Ghosn flee Japan and said the former Nissan chairman should have stayed to face trial for alleged financial misconduct.

‘I deeply regret my actions and sincerely apologize for causing difficulties for the judicial system and for the Japanese people,’ he said in a quavering voice. 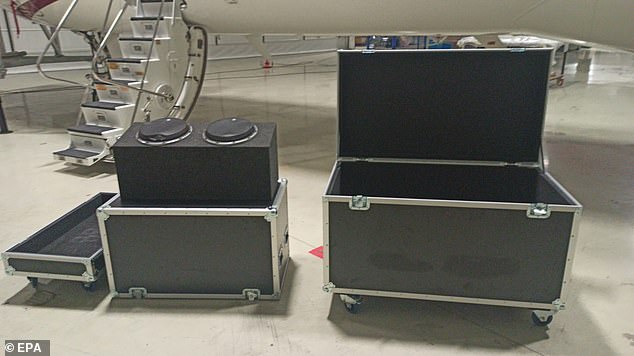 Michael Taylor and his son Peter this month pleaded guilty to charges that, in December 2019, they illegally helped Ghosn escape from western Japan’s Kansai airport hidden in a speaker box (pictured) aboard a private jet to Lebanon

He replied yes when the prosecutor asked whether he believed Ghosn should have stayed in Japan.

The Taylors’ defense lawyer Keiji Isaji sought a speedy trial. Many Japanese trials last for months, if not years.

The maximum penalty in Japan for helping a criminal is three years in prison. Prosecutors had demanded a sentence of of two years and 10 months for Michael Taylor and two years and six months for his son.

The Taylors’ defense had argued for suspended sentences for the two, who spent 10 months in custody in the U.S. before their extradition.

But Nirei said the time they were held before and during trial would not count as time served, saying they were not directly related and should be treated differently. ‘There is a limit to how much we can consider,’ he said.

Michael Taylor, a private security specialist who in the past was hired by parents to rescue abducted children, told the court a cousin of Ghosn, who is his wife’s sister in law, helped persuade him to take the job.

He also said he felt sympathy for Ghosn and his wife Carole after they told him that Ghosn could be held in Japan for up to 15 years.

The couple, he said, told him jumping bail in Japan was not a crime.

The Taylors’ lawyers in the United States waged a months-long battle to prevent their extradition, arguing they could not be prosecuted for helping someone ‘bail jump’ and that they could face relentless interrogation and torture.

But the Massachusetts men, who had been locked up at a suburban Boston jail since their arrest in May, had failed to convince US officials and courts to block their extradition to Japan. 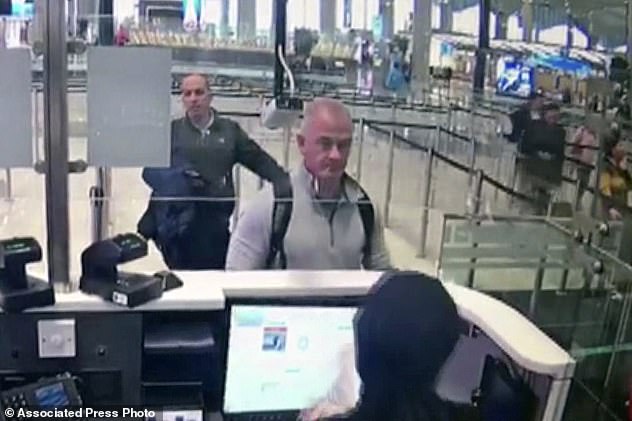 An image from security camera video shows Taylor, center, and George-Antoine Zayek at passport control at Istanbul Airport in Turkey in December 2019 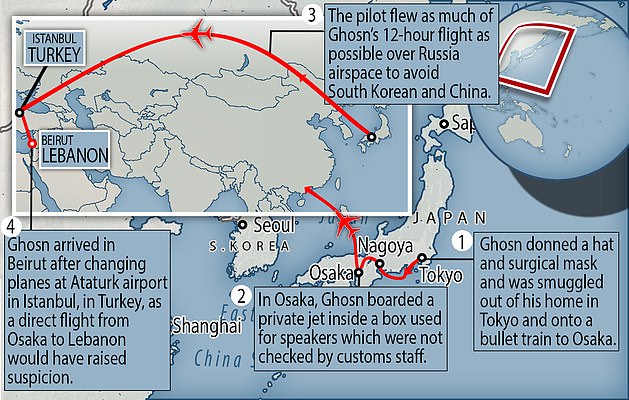 At the time of his escape, Ghosn was out on bail while awaiting trial on charges, which he denies, that he understated his compensation in Nissan’s financial statements by 9.3 billion yen ($84 million) over a decade and enriched himself at his employer’s expense through payments to car dealerships.

He managed to slip past authorities onto a private jet, transit in Turkey and land in Lebanon.

The escape was hugely embarrassing for Japanese authorities, who termed it ‘one of the most brazen and well-orchestrated escape acts in recent history’. 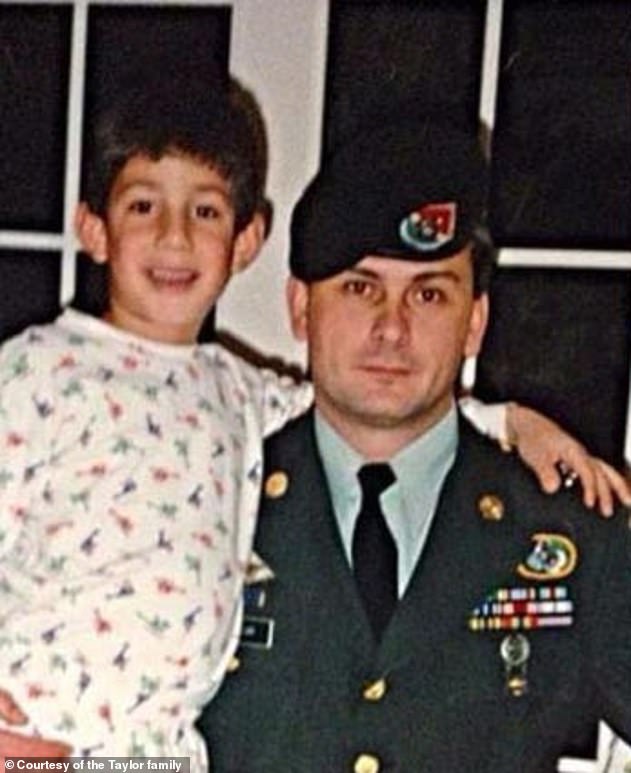 On the day of the escape in December 2019, Michael Taylor flew into Osaka on a chartered jet with another man, George-Antoine Zayek, carrying two large black boxes and pretending to be musicians with audio equipment, authorities said.

Meanwhile, Ghosn, who was free on bail, headed to the Grand Hyatt in Tokyo and met up with Peter Taylor, who was already in Japan, authorities say.

The elder Taylor and Zayek met up with the two others at the Grand Hyatt and shortly after, they split up.

Peter Taylor hopped on a flight to China while the others got on a bullet train and went back to another hotel near the airport in Osaka where Taylor and Zayek had booked a room. They all went in; only Ghosn’s rescuers were seen walking out.

‘There were dozens of people in the carriage, but I was wearing a cap, a facemask and sunglasses. You’d have had to be a real expert to recognise me under all that,’ Ghosn wrote in a book published last year.

Authorities say Ghosn was inside one of the big black boxes that had air holes punched in it so he could breathe. At the airport, the boxes passed through a security checkpoint without being checked and were loaded onto a private jet headed for Turkey, officials said.

Ghosn told the BBC recently about the experience, describing the half-hour in the box waiting for the plane to take off as ‘probably the longest wait I’ve ever experienced in my life’.

Ghosn denies wrongdoing and remains a fugitive in his childhood home, Lebanon, where he was questioned last month by French investigators over a series of alleged financial improprieties.

Among the allegations are improper financial interactions with Renault-Nissan’s distributor in Oman, payments by a Dutch subsidiary to consultants and lavish parties organised at the Palace of Versailles.

The questioning took place with his defence team and a Lebanese prosecutor present. Ghosn was heard as a witness as he would need to be in France to be formally indicted.

Others involved in the Ghosn case have faced legal proceedings, including his former aide at Nissan, Greg Kelly, who is also on trial in Tokyo for his alleged role in underreporting the tycoon’s income. He also denies the charges.

A verdict in Kelly’s trial, which began in September last year, is not expected until next year. More than 99 per cent of Japanese criminal trials result in convictions. Upon conviction, the charges Kelly faces carry the maximum penalty of up to 15 years in prison.

And a Turkish court has sentenced two pilots and another employee of a small private airline to four years and two months in prison for their role in Ghosn’s escape.

Ghosn switched planes in Turkey on his way to Lebanon, and the three Turks were charged with involvement in a conspiracy to smuggle a migrant.

Over the years, Michael Taylor has been hired by parents to rescue abducted children, gone undercover for the FBI in a sting on a Massachusetts drug gang and worked as a contractor for the US military in Iraq and Afghanistan. And this isn’t the first time he has found himself in legal trouble.

In 2012, federal prosecutors alleged Taylor had won a US military contract to train Afghan soldiers by using secret information passed along from an American officer.

When Taylor learned the contract was being investigated, he asked an FBI agent and friend to intervene, prosecutors charged. Taylor spent 14 months in jail before agreeing to plead guilty to two counts.