By Tim Stickings For Mailonline and Afp

A former German CEO has been arrested over a missing €1.9billion in a financial scandal which could be one of Germany’s biggest-ever frauds.

Braun resigned on Friday after the company said it could not find the €1.9billion supposedly sitting in its accounts, and the firm admitted yesterday that it probably ‘does not exist’.

Prosecutors claim that Braun artificially ‘inflated’ the figures with ‘fake transactions’ in order to to make the company seem financially stronger and more attractive to investors and customers’.

The case has drawn comparisons with the early-2000s Enron scandal in the United States when several executives were found guilty of fraud after the firm went bust.

What was the Enron scandal?

The Wirecard crisis has been compared to the Enron scandal in the early 2000s, when the Texan energy company’s collapse shook the US economy and led to revelations of accounting fraud and complicity from auditors.

Investors lost millions when the company declared bankruptcy in 2001, prompting US authorities to investigate.

22 people were convicted for their role in the scandal, including former CEO Jeffrey Skilling who was released from prison after a 14-year term last year.

Skilling was convicted of 19 counts of conspiracy, securities fraud, insider trading and lying to auditors for his part in the collapse of Enron.

The company’s president and chief operating officer Greg Whalley was also convicted along with Enron’s chief financial and accounting officers.

The €1.9billion ($2.1 billion) supposedly sitting in trust accounts in the Philippines made up a quarter of Wirecard’s balance sheet.

But ‘on the basis of further examination… there is a prevailing likelihood that the bank trust account balances in the amount of €1.9billion do not exist,’ Wirecard said.

Prosecutors in Munich said Austrian-born Braun had voluntarily presented himself to the authorities on Monday evening after an arrest warrant was issued.

Braun is suspected of ‘inaccurate presentation concurring with market manipulation’, prosecutors said in a statement.

Braun may have acted ‘with other perpetrators’, they said.

The company also announced on Monday that it had dismissed chief operating officer Jan Marsalek, days after suspending the top executive.

The missing cash was intended to cover the risks of trading that was supposedly carried out by other companies on Wirecard’s behalf.

But the board said it is unclear ‘whether, in which manner and to what extent’ this business ‘has actually been conducted’ in recent years.

The names of two of the country’s biggest banks – BDO and BPI – were used to try to mislead eventual investigators, it added.

Wirecard has been the subject of investigative reporting by the Financial Times for more than a year.

The company had initially disputed the reports, which first emerged in February 2019, and said it was the victim of speculators.

But the hammer blow came when auditors Ernst and Young said on Thursday that the €1.9billion was missing from Wirecard’s accounts. 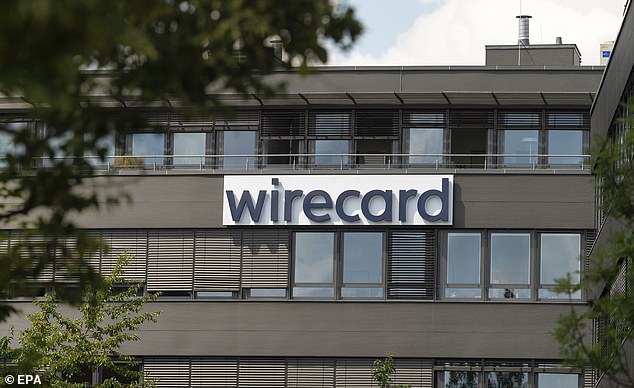 Payment provider Wirecard (whose headquarters near Munich are pictured) said it could not find the €1.9billion supposedly sitting in its accounts

The head of German financial markets watchdog BaFin, Felix Hufeld, said ‘we are in the most horrifying situation I’ve ever seen a DAX company have,’ referring to Germany’s leading stock index.

The scandal marks a fall from grace for the Bavarian start-up, set up in 1999 and growing to prominence in the electronic payments industry.

The firm entered the prestigious DAX 30 with great fanfare in 2018 after elbowing out traditional lender Commerzbank.

But Wirecard is now in crisis talks with creditors and is ‘examining a broad range of possible further measures to ensure continuation of its business operations’.

Shares in Wirecard were trading below €16 on Monday afternoon – down from almost €100 last Wednesday.

The firm, which employs nearly 6,000 people, has also withdrawn its preliminary results for 2019 and the first quarter of this year.