George Osborne is the latest political heavyweight to be linked to a pro-China lobbying group accused of grooming Britain’s elite.

Mr Osborne, who steered a lucrative ‘golden era’ of relations with Beijing as chancellor, was a guest of honour alongside a Huawei executive at a dinner hosted by the 48 Group Club, The Times reported.

The club took down its website last week after publication of a book called the Hidden Hand, an exposé which paints the 650-strong organisation as a networking hub ‘through which Beijing courts Britain’s elites.’

At the club’s Chinese New Year dinner in 2017, Mr Osborne was introduced as ‘the godfather’ before he gave an address which lauded Huawei and mentioned their work on Britain’s 5G infrastructure.

Huawei’s role in the telecoms system today appears to be dead in the water after the release of a damning intelligence report this week which warned of the grave security risks the Chinese company posed.

Chancellor George Osborne, Madame Peng Liyuan, Chinese President Xi Jinping and the Duke of York listen to speeches during a visit to Imperial College London, on day two of the state visit by the Chinese President in October 2015 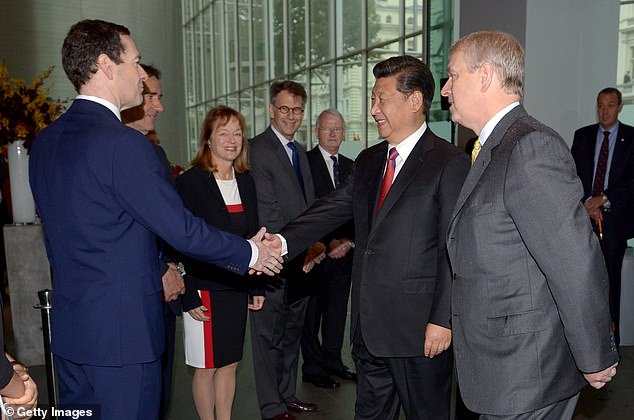 Mr Osborne was a backbencher at the time of his Chinese New Year speech. He did not provide The Times with any comment.

He told the banquet: ‘It’s my very strongly held view that the West, hopefully led by the UK, should accept China as a full partner in that endeavour [of free trade].

‘If you want to see what China is capable of, go to the Huawei headquarters, as I did, in Shenzhen, talk to Mr Ren [Huawei boss Ren Zhengfei], talk to the teams there developing 5G technology.

‘By the way, don’t just talk to the teams there in Shenzhen, go to Guildford, talk to the teams in Guildford . . . you’ll see the extraordinary development of progress that Chinese companies are making every day in collaboration with British companies.’

On its website, the 48 Group Club lists two KPMG partners on its board, former government ministers Lord Heseltine and Lord Prescott as its patrons and a raft of famous names as ‘fellows’. 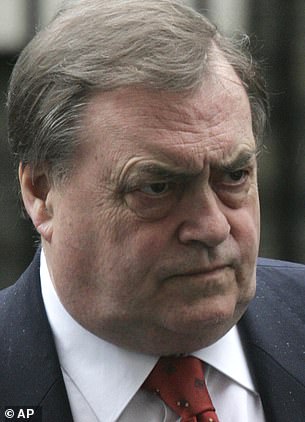 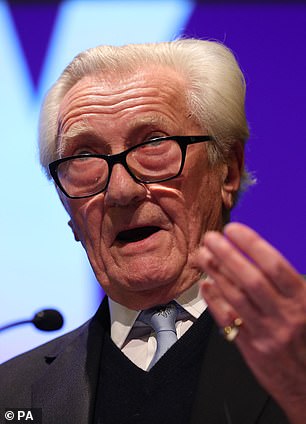 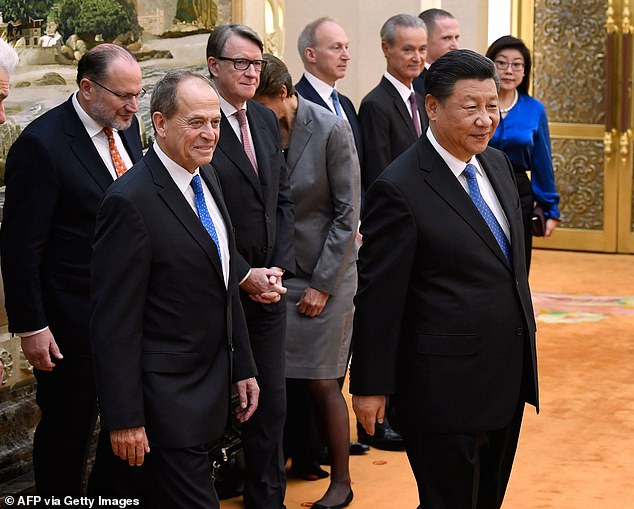 China’s President Xi Jinping accompanies the 48 Group Club chairman Stephen Perry (front left) for a meeting at the Great Hall of the People in Beijing on October 16, 2018

The London 48 Club claims to have sprung out of the first post-war UK trade delegation to China in 1953 and is named in the book as as a channel for President Xi to exert influence.

What is the 48 club? A group of British elites to foster relations with China

The 48 Club is a 650-member strong organisation which helps British companies break into the Chinese market, according to its website.

It dates back to the efforts of businessmen to forge greater Sino-Anglo alliances following the formation of the People’s Republic of China in 1949.

It paved the way for a second visit in 1954 where 48 representatives from British companies embarked on a trade mission to China.

Since its inception, the club claims to command gravitas among the Chinese businesses community to the extent that it is ‘the most respected name in China-Britain trade’.

According to its website, the 48 club’s mission statement is to ‘have a vital role in unfreezing the cultural deficit between China and the world’.

The group was particularly close with former Chinese premier Hu Jintao, who is pictured with several of the 48 club’s members, including Perry.

The club hosts seminars and dinners for its members, while also offering ‘support and consultancy services to British companies entering China’s market’.

The 48 Club claims to be funded by its members.

Mr Perry is managing director of the London Export Corporation, a consultancy firm about the Chinese market.

Its current chairman Stephen Perry, a businessman who runs a China-UK import export business, met Xi in 2018 according to an archived version of the group’s site.

Mr Perry’s father was one of the founders of the 48 Group.

Mr Perry was the only Briton among ten foreigners to be awarded the China Reform and Friendship Medal to mark the 40th anniversary of Bejing’s economic reforms – the so-called ‘Socialism with Chinese characteristics.’

Hidden Hand’s authors cite Mr Perry’s blog on the 48 Group Club website which provided details of his meeting with Xi.

The club’s website was pulled but an archived version which lists its members can still be viewed.

The ‘about us’ section of the 48 Group’s website says it grew out of the first UK trade delegation to China in 1953,

It paved the way for a second visit in 1954 where 48 representatives from British companies embarked on a trade mission to China. The 48 Group takes its name from this from these delegates.

It says it is now ‘the most respected name in China-Britain trade’.

The glittering array of business, political and media figures listed as members by the 48 club is also visible on an archived version of the website from October 2019.

However sceptiscism has been poured on the accuracy of the list as some of the names approached have denied membership.

Mr Blair’s office said they had ‘no idea’ why the former PM was listed when approached by MailOnline.

Richard Graham, Tory MP for Gloucester, told the Times he was unaware he was a fellow, but added that it was ‘very kind’ of them to offer him membership.

Former Labour home secretary, Jack Straw, said he’d never heard of the 48 Group Club and told the newspaper, ‘so why I’m on their website I’ve no idea.’

Lord Heseltine acknowledged his affiliation with the group – also known as ‘The Icebreakers’ – and defended its aims.

‘I’ve spoken at a number of their big dinners, when I have made comments that are frank about Chinese activity,’ he told The Times. 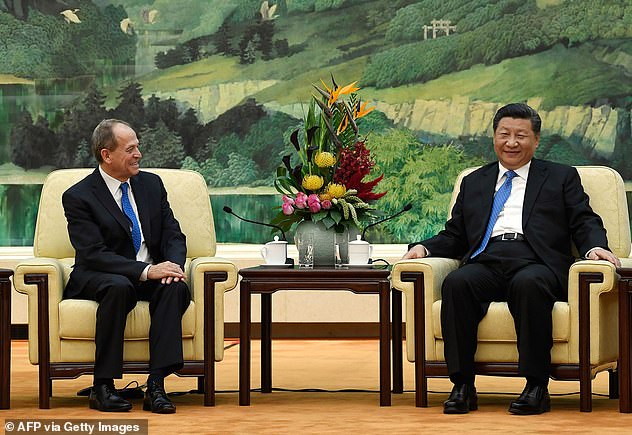 China’s President Xi Jinping (right) meets with the 48 Group Club chairman Stephen Perry at the Great Hall of the People in Beijing on October 16, 2018

The 48 Group Club board told the paper: ‘The 48 Group Club is not in any sense a vehicle for Beijing. It is an independent body promoting understanding of China and positive Sino-British relations, which we believe to be in the UK’s national interest. Any suggestion to the contrary is quite false.’

It added that Prof. Clive Hamilton, co-author of Hidden Hand, had not approached them for comment in the course of his research.

The 48 club was founded to shore up Sino-Anglo relations following a period of friction between the two countries after the Korean War, which became a proxy battle between the Western and Communist states.

The name itself is an homage to the 48 British businessmen known as the Icebreakers who embarked on a trade mission to China in 1954.

According to its website, the 48 club’s mission statement is to ‘have a vital role in unfreezing the cultural deficit between China and the world’.

From prime ministers to business elites, who are the powerful movers and shakers named as members by the 48 Club? 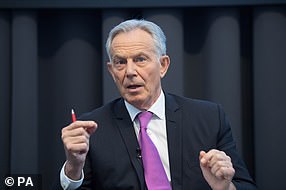 Former prime minister Tony Blair is listed, but his office said they had ‘no idea’ why his name appears 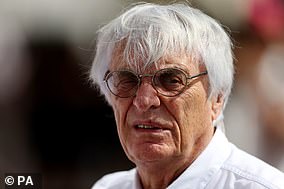