It was in Devon ten years ago that my love affair with Crete began. In an antiquarian bookshop in the village of Dartington, I chanced on Winds Of Crete by an American author who had lived on the island with his Swedish girlfriend for six years in the 1970s, long before tourism became such a major part of the Greek economy.

By the time I’d finished reading David MacNeil Doren’s personal account of the island, I was determined to go there, if not for six years, at least for six days.

I’d already been to Corfu but was curious about this, by far the largest of the Greek islands. Cretans say May is the best time to visit, when the temperate spring air carries the scent of herbaceous wildflowers – peonies, crocus and chamomile. In spring, the beaches (rarely full) are virtually empty and the sea is a comfortable 21C.

A view of the city of Chania, the former capital, with its historic harbour. Alan says it’s his favourite city on the island

We plumped for a one-bedroom place in the middle of nowhere, soon realising that in Crete, there’s an awful lot of nowhere to be in the middle of. Of course, I knew the island would have changed since the book was written, but what continues to surprise me is how much of the old life remains, away from the resorts.

Livadia, where we went on that first visit, is a tiny village in the west of Crete with a threadbare cafe-cum-general-store, run by a surly chap named Dimitri and his loquacious daughter.

The village sits smack in the middle of a European hiking path (E4), a beautiful, albeit rugged, seaside route that starts at Sfinari and finishes on Elafonisi beach.

The little cafe drew in holidaymakers, campers and those travellers along the quiet coastal road fortunate enough to have seen the rudimentary ‘To the Taverna’ signpost tied to a roadside tree.

Dimitri’s place wouldn’t have been to everybody’s taste. There was no frontage, no bar – just an assortment of hard chairs and wooden tables set out beneath the trees. Each table had its own uninterrupted view of the magnificent sunsets across the specular surface of the sea. 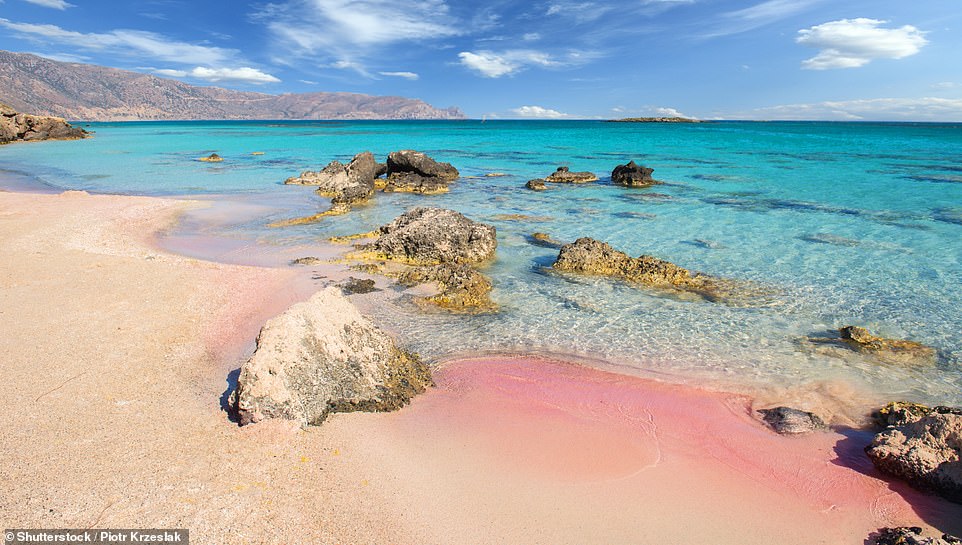 The pink-hued sand at Elafonisi beach, which Alan says is ‘extremely popular, particularly with families or nervous swimmers’. The waters here are never more than a few feet deep 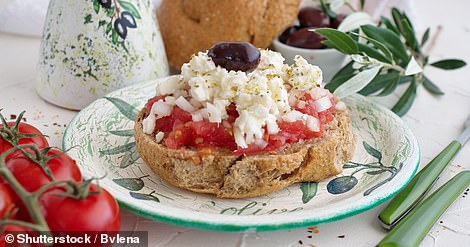 Alan describes how on his first visit to Crete he would eat regularly at a threadbare cafe-cum-general-store in Livadia, where each meal would start with a Cretan salad known as dakos (stock image above), containing tomatoes, olives and mizithra cheese

Oh, and did I mention there were no menus? For children, Dimitri offered burgers or pizza, while adults could experience his culinary skills applied to whatever he fancied cooking that evening – one dish, his choice, take it or leave it.

Cretan cuisine is said by the World Health Organisation to be the most wholesome in the Med. I doubt if Dimitri had any interest in healthy lifestyles. A huge man with long grey hair tied into a ponytail, he simply cooked the food he’d grown up eating.

On our first night we had a whole fish of some description freshly caught, its plump white flesh served with herbs, courgettes and purslane. The next night it was a rich moussaka, on other evenings pork with celery, rabbit with artichokes, a cheese and spinach pie. Delicious.

Every meal started with the Cretan salad known as dakos, containing tomatoes, olives and mizithra cheese (rather than the feta used in Greek salads) served on the ubiquitous barley rusks known as dakos.

Food fit for the Savoy Grill was served up for the price of a meal at the works canteen. Dimitri never left his rudimentary kitchen other than to drink a toast to his guests at the end of the evening.

It’s a holiday destination for the active as well as the not so active; for the intrepid explorer and the poolside dreamer; for the surfer and the paddler

His daughter told us that ‘Cheers’ was all the English he could manage, communicating instead through the local wine. Those alfresco evenings were a glorious introduction to the island.

Elafonisi, at the end of the E4, became our favourite beach, its pure sand given a pinkish hue by thousands of tiny fragments of sea shells. It’s extremely popular, particularly with families or nervous swimmers (like me), because the bath-warm water is never more than a few feet deep.

On that very first visit, we did what we’ve done on every holiday since: spend the mornings visiting new places and the afternoons lazing on the beach.

It’s a holiday destination for the active as well as the not so active; for the intrepid explorer and the poolside dreamer; for the surfer and the paddler. 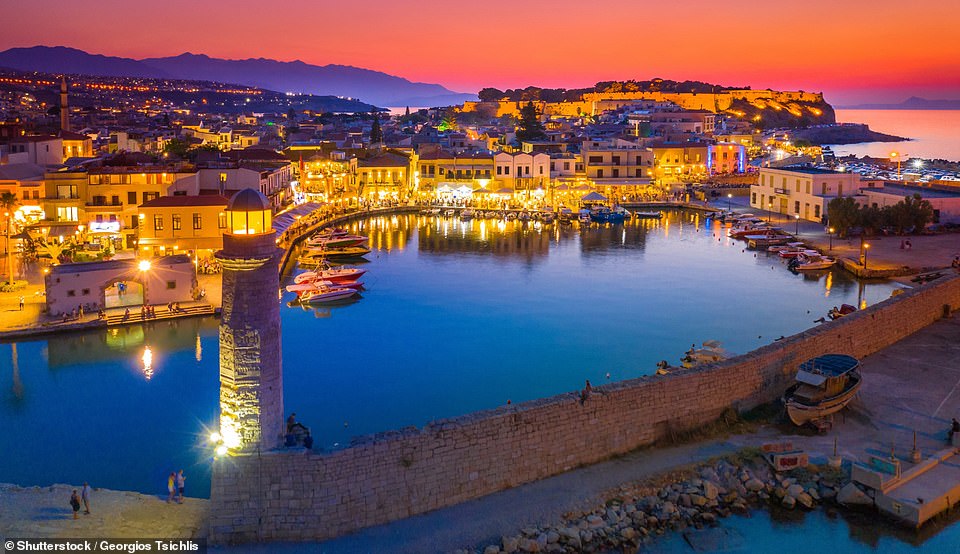 Between the capital Heraklion and Chania Alan says you will find the city of Rethymno, pictured 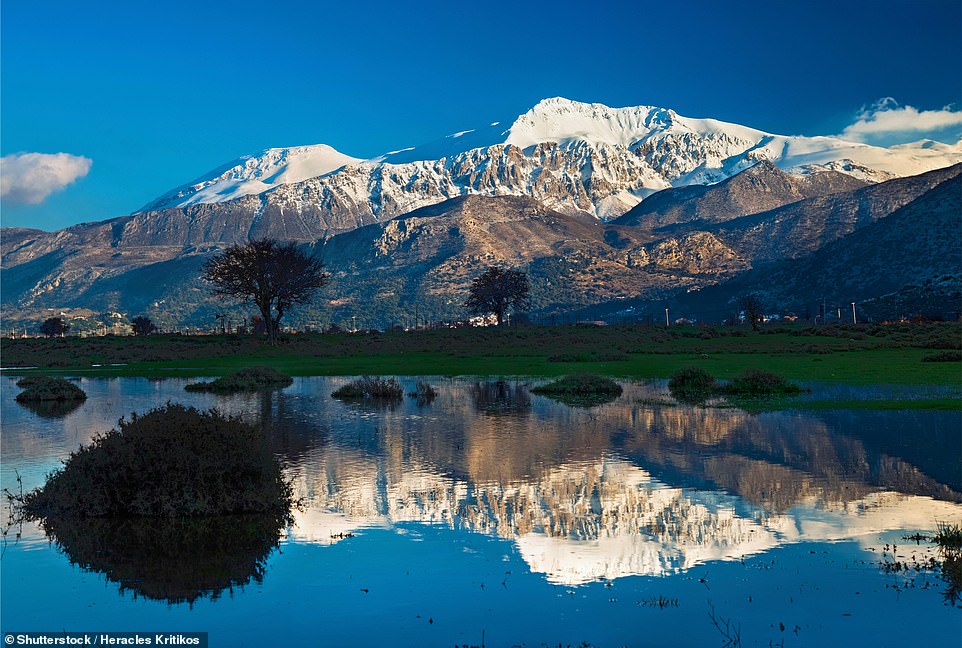 Alan writes: ‘Legend has it that Zeus was raised in a cave in the Dikti mountains (pictured) to the east of the island’

The Cretans themselves are immensely proud of their island and keen to tell you all about it. Since that first blissful trip, we’ve returned many times in every season. No matter where you decide to stay, you’re bound to see a mountain.

Legend has it that Zeus was raised in a cave in the Dikti mountains to the east of the island. To the west are the White Mountains, or Lefka Ori. The reflection of the sun on the limestone summits is what gives the range its name, rather than the snow, which has melted by the time most holidaymakers arrive.

And where there are peaks, there must be troughs. The Samaria Gorge, last refuge of the agrimi, the famous Cretan wild goat, is the most spectacular, running for eight miles through the White Mountains. Pick up some picnic food and drive to Samaria itself to begin your walk through a gorge I can only describe as gorgeous. 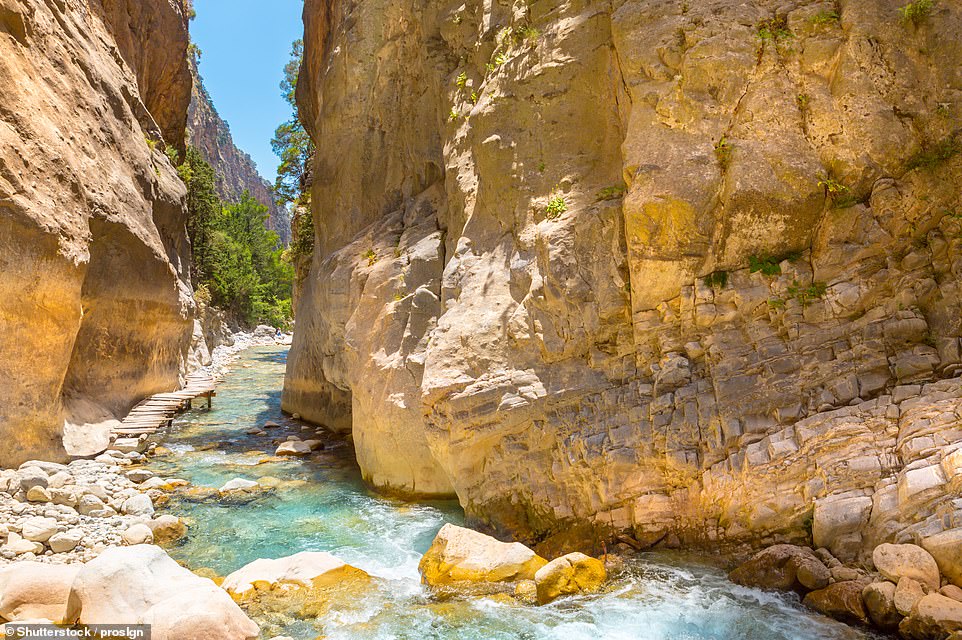 The Samaria Gorge runs for eight miles through the White Mountains. Alan describes it as… ‘gorgeous’ 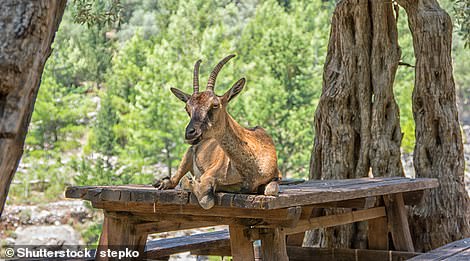 The Samaria Gorge is the last refuge of the agrimi, the famous Cretan wild goat (above)

Chania, the former capital, is our favourite city on the island. Indeed, we once contemplated renting here for half the year to escape the English winters, going so far as to look at places to let in the Old Town, where we found plenty of charming two-bedroom flats with balconies or roof gardens that would have been ideal. In the end, we decided that being away from family, friends and pets for so long was unrealistic.

This part of Chania needs to be on every visitor’s itinerary.

Here you’ll see the walled Venetian harbour where luxury yachts bob alongside modest fishing vessels. There’s a bustling nightlife too, around a crescent of excellent restaurants facing the harbour. Whenever we go to the Old Town, the same cheery musician is sitting on an upturned wooden crate against the wall of a former mosque, playing his accordion. 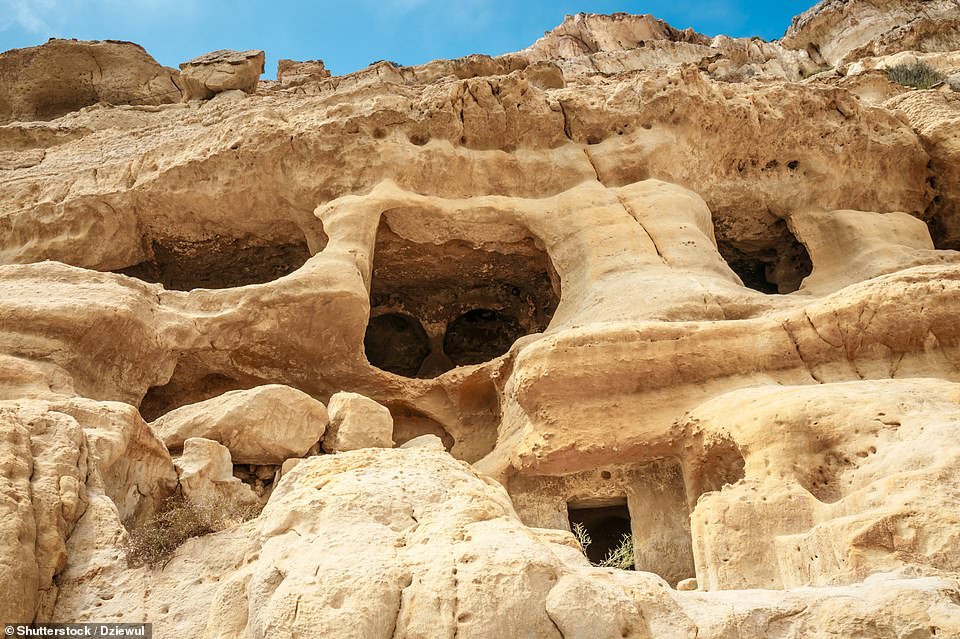 Alan describes his first visit to the south coast of Crete as ‘like finding a new country’. One of the sights there is a honeycomb of caves in Matala (above), cut into the cliffs as burial chambers by the Romans. Joni Mitchell set up home there in the 1960s, Alan reveals 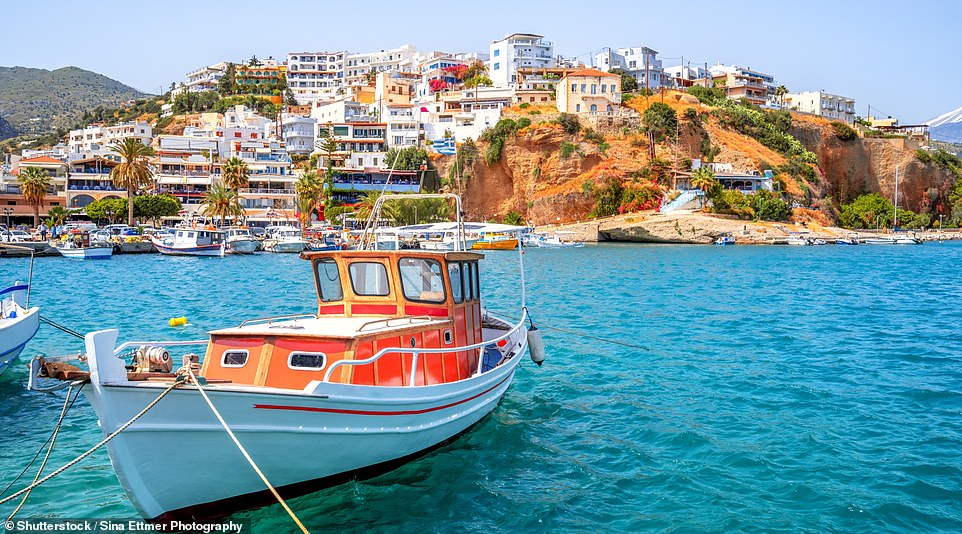 Agia Galini, pictured, is the backdrop to Alan’s new novel, One Of Our Ministers Is Missing. He says the restaurants there are ‘excellent’ and there is a ‘quiet beach’ to enjoy 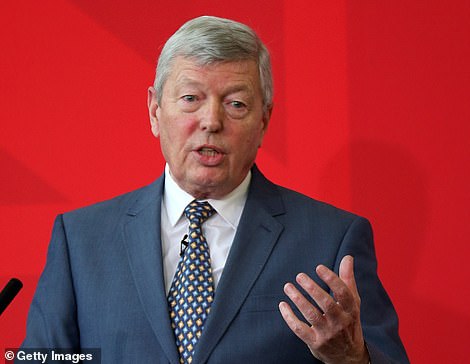 He plays only one song. We’ve heard him so often now that we associate ‘Lambada’ with Crete rather than its native Brazil.

Between the capital Heraklion and Chania is Rethymno. It’s hardly surprising that Crete’s three main cities are on the north coast – a ferry ride away from mainland Greece. It’s also where most of the holiday resorts are situated.

When we first ventured away from here, across the mountains to the south coast, it was like finding a new country. We drove from Heraklion down through Mires, where there’s a bustling market and, for the traveller on foot, a transport hub for buses.

The journey coast to coast doesn’t necessitate an overnight stay but there are good, clean rooms in Mires at reasonable rates. Not much farther and you’re on the south coast, where the ‘Winds of Crete’ blow across the Libyan sea from Africa.

We’ve been back to the south coast many times, principally to Agia Galini – the backdrop to my latest thriller, which I was still writing when we visited last year. There’s a harbour authority office that makes a perfect police incident room, and plenty of dark coves and inlets nearby for smugglers to skulk around in.

As for the pretty town itself, there’s a quiet beach, calm waters and a perfect climate.

Along the coast is Matala, where, in the 1960s, Joni Mitchell chose to live in one of the honeycomb of caves cut into the cliffs as burial chambers by the Romans.

In Agia Galini, the restaurants are excellent. We were delighted to discover that one of the best, the Madame Hortense, was run by Vicky from Reading, who’d moved to the town with her Cretan husband 20 years ago. I promised we’d return to the Madame Hortense with an inscribed copy of my book when it’s published.

Remarkably, and reassuringly for visitors, there are no creatures dangerous to humans on Crete; no bears, wolves, deadly insects or venomous snakes.

But, the creatures most deadly to humans are, of course, other humans. Crete is as safe as anywhere in the world, except in the imagination of a thriller writer.

Alan Johnson’s second novel, One Of Our Ministers Is Missing, set on Crete, is out now, published by Wildfire Books.