MotoGP legend Casey Stoner has opened up about his battle with chronic fatigue syndrome which left him couch-ridden for months.

The Australian two-time motorbike racing world champion made a surprise appearance at the Algarve Grand Prix in Portugal on Saturday.

It was the first time Stoner, 36, was seen at the race track in three-and-a-half-years since his illness forced him to give up his testing role with Ducati and walk away from the sport.

An emotional Stoner held a press conference at the Algarve Grand Prix, where he admitted he has ‘struggled massively’ with his health since being diagnosed in 2018.

‘I got to the point where I couldn’t get off the couch basically for five months,’ 38-time race winner said.

‘From bed to the couch was my exercise for the day. I couldn’t explain anything, we couldn’t understand anything.

‘Mentally I was struggling. Physically, massively.’

Stoner spent the past four years trying to manage his battle and learning how to conserve energy during the day.

‘I’ve been learning what hurts me long term versus what not necessarily makes me better, but reduces the effect of my issue,’ the father-of-two said.

‘The end of last year I started feeling a little better in December, January. I thought maybe I’m not coming out of it but I can manage this now.

‘But then I hit March, April and went backwards again. I’m a little less optimistic with things at the moment. I just kind of go day by day how I feel.

‘Sometimes I’m extremely exhausted and just cannot explain it, and then other days I’m a little better.

‘I’m basically never more than 60 per cent of my usual self. I’ve had to learn to walk everywhere, which I hate. I always used to jog just about everywhere but now I have to walk.

‘It’s just about conserving energy and getting through each day.’ 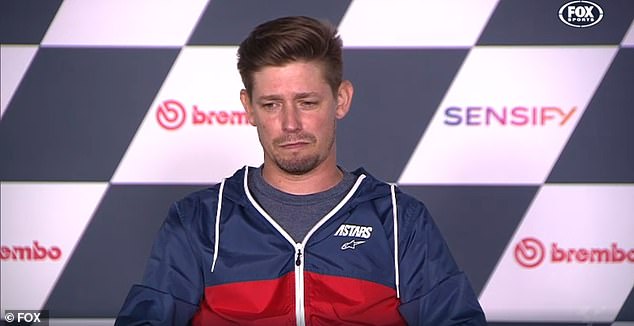 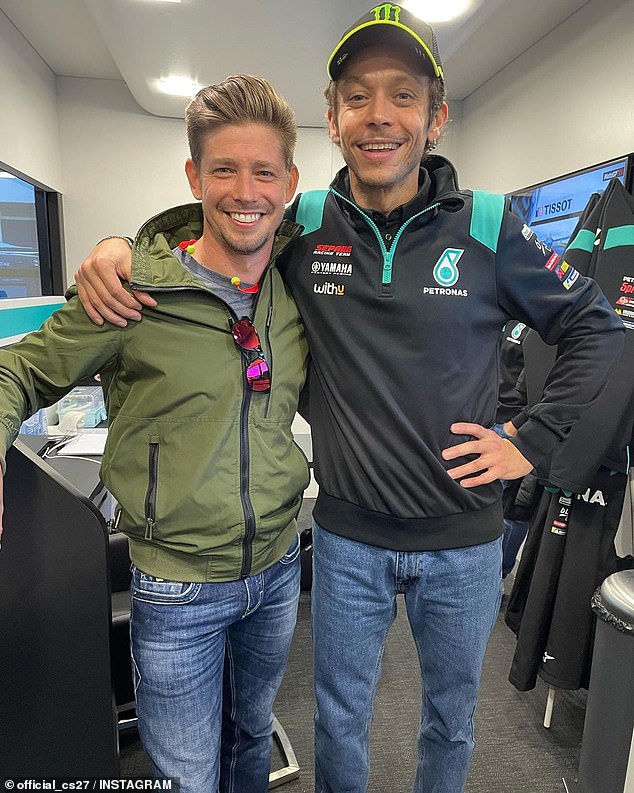 Casey Stoney (left) has made his first appearance at the track at the Algarve Grand Prix in Portugal this weekend. He is pictured with former arch rival Valentino Rossi (right)

He admitted his absence from the track had been too long.

‘It’s been three-and-a-half years I believe. This was my whole world for a lot of years. We knew everyone,’ Stoner said.

‘A lot of people in this paddock are family and friends. We’ve missed everyone, to be honest.’

He shared a photo catching up with his biggest rival and fellow former world champion Valentino Rossi, who recently retired.

‘The pleasure was all mine!,’ Stoner captioned the photo.

Miller will go into Sunday’s race as the second fastest qualifier. 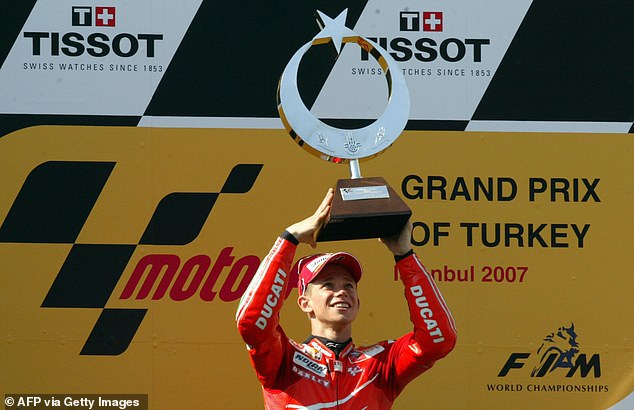 He remains the only rider to have won a world title on Ducati.

Stoner revealed a year ago he has been living with chronic fatigue syndrome since 2018.

‘I thought that I would find a way to cure it, that I would train more than anyone else and I would have moved on, but I was wrong,’ he told Spanish newspaper El Mundo last year.

‘All this has made me rethink my life. On fine days I take the opportunity to play with my daughters and if anything I’m going to play golf,

Stoner also battled with health issues early on his racing career and believes a misdiagnosis of being lactose intolerant was in fact Epstein-Barr virus, an energy-sapping illness that has hampered the careers of several riders, including Jonas Folger. 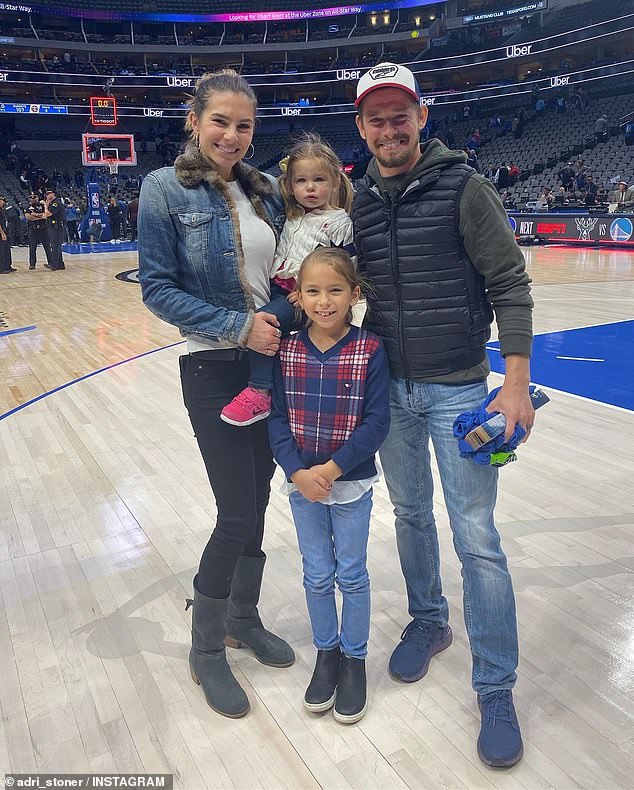 He says doctors told him the virus which causes glandular fever may have triggered the chronic fatigue syndrome that plagues him now.

‘I raced with Esptein-Barr but chronic fatigue syndrome is a whole other level,’ Stoner recently told Australian Motorcycle News.

‘It’s been terrible. I didn’t believe it existed. It started after I had my injured shoulder reconstructed in 2018.’

There is no cure for the debilitating illness.

One of the most common symptoms is unexplained and overwhelming tiredness despite minimal physical or mental effort.

Other symptoms include headaches, muscle pain, joint pain, sore throat, loss of memory or poor concentration, not feeling refreshed after being asleep, enlarged lymph nodes and unusual tiredness after exercise. 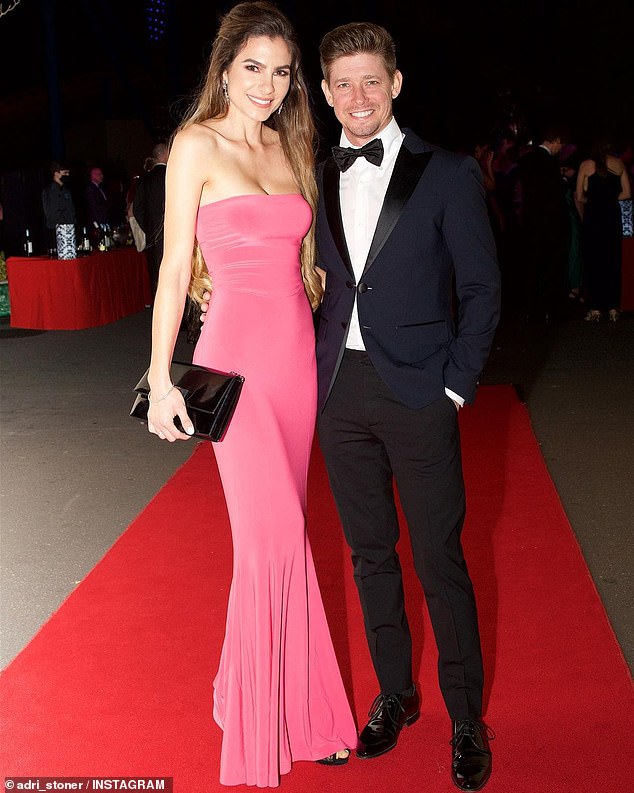 WHAT IS EPSTEIN-BARR VIRUS?

The virus is transmitted through saliva, and can be transmitted from person to person through: kissing, coughing and sneezing or through sharing utensils and drinking containers.

While most people make a complete recovery, the virus remains in the body for life once infected.

The same virus has  hampered the career of former German racer Jonas Folger.

Former British track athlete Roger Black, who competed at the 1992 Olympics in Barcelona also battled with Epstein-Barr during his career.