Ash Taylor has gone from being paid $1million a year with the Gold Coast in 2017 to retiring aged just 27, it has been reported.

A chronic hip injury will spell the end for Taylor after he played just one game for the New Zealand Warriors this year, according to the Daily Telegraph.

The halfback said he had ‘both my hips shaved back’ during the 2020 offseason while he was still with the Titans.

‘They’ve been giving me trouble for a few years now and it was just time to get it done and hopefully that frees me up on the field,’ he explained.

Warriors coach Nathan Brown all but confirmed the shocking news ahead of his team’s clash with Canberra on Saturday.

‘He’s definitely been struggling with his hip,’ Brown said.

‘[Retirement] is what it looks like it’s going to be, unfortunately, for Ash.’

The complaint kept him out for four weeks in 2021 – his last campaign with the Titans before the Warriors gave him a $1,000-a-week training contract for 2022.

It was a far cry from his $1million-a-year, three-year deal with the Gold Coast, which he signed in late 2017 and earned with a stunning run of form.

Brisbane were keen to lure him back to Red Hill at the time, and then-Titans coach Garth Brennan believed he could take charge of the team and take them to a premiership.

‘At the end of the day your halfback needs to own the football team, and it’s time for Ash to say ‘you’re the half-back, take control’,’ Brennan said.

‘I think he is (capable of leading the Titans to a premiership) … the spotlight’s going to be on him now, with that contract signed, but I’m sure he’ll embrace it and be the kind of person that can handle that.’

Taylor played made his NRL debut for the Broncos in 2015, playing just one game for them after starring for the Junior Kangaroos and Queensland under-20s, and winning the Holden Cup player of the year award. 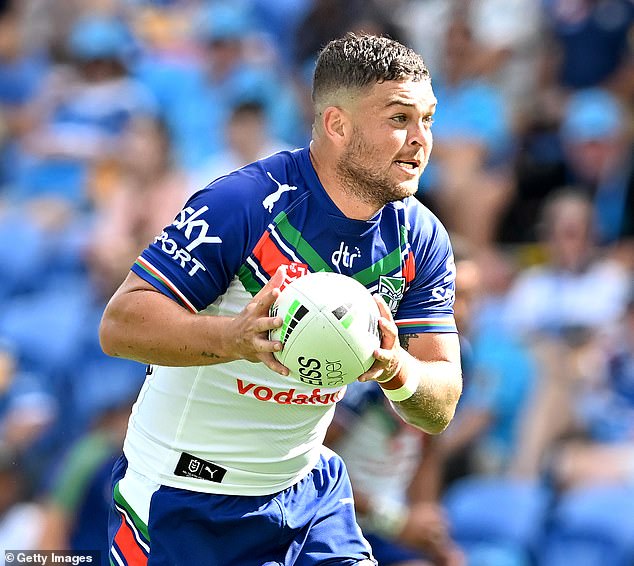 Taylor made one appearance for the New Zealand Warriors this year after signing a $1,000-a-week training contract with them in the offseason

He was released so he could chase a first-grade spot with the Gold Coast, which he nailed down to the tune of 114 games.

Taylor had a great 2016 as the Titans made the finals, and featured in almost every game of the club’s awful 2017 campaign, when they finished second last.

He was struggling for form by 2019, when he was granted indefinite leave by the club to deal with personal issues. After two months he returned to the team, but was demoted to reserve grade soon after.

The Titans cut him after the end of the 2021 season, during which he made 16 appearances but was also demoted to reserve grade.