Forests covering an area the size of France have regrown around the world since 2000, storing the equivalent of 5.9 billion tonnes of carbon dioxide, a new study shows.

The Trillion Trees project, founded in 2016 to protect and restore forests worldwide, found that nearly 145 million acres of forests have grown back globally in 21 years.

This area of returning woodlands could store more than the annual CO2 emissions of the US, highlighting the vital role forests play in tackling climate change.

But conservationists warn ‘vastly’ more acres of trees are being burned and cut down each year around the world than are being regrown.

The Trillion Trees project, run by WWF, BirdLife International and the Wildlife Conservation Society, has called for more support fo forest regeneration to tackle climate change, alongside action to stop deforestation in places like Brazil.

Forests covering an area the size of France have regrown around the world since 2000, storing up the equivalent of 5.9 billion tonnes of carbon dioxide, study shows 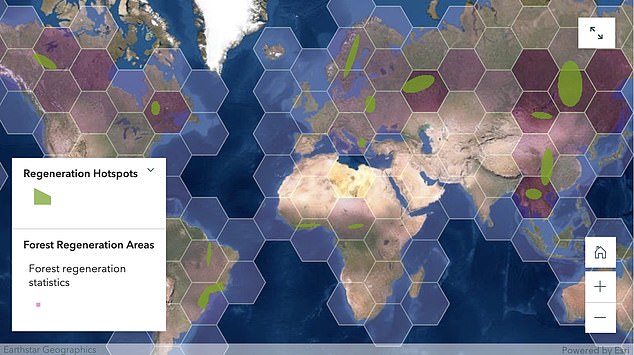 The green blobs highlight areas of forest regeneration over the past 21 years, according to the Trillion Tree project report 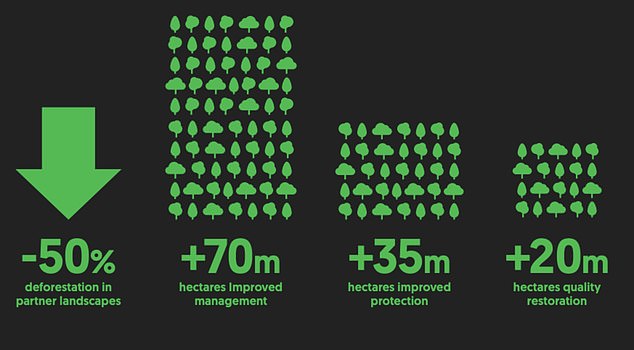 Trees have been planted in 60 countries around the world by Trillion Trees project partners.

They are working with a total of nearly a billion acres of forests globally.

Of those more than 104 million acres of forests have regrown since 2000.

Forests mapped by the project store the equivalent of 104 billion tonnes of carbon dioxide emissions.

Of those emissions 5.9 billion tonnes has been stored by regrown forests.

There are about 66 million people living in or near forests worldwide.

Study authors have looked at areas around the world where woodlands are regenerating due to ongoing conservation and reforestation efforts.

Active restoration involved the most human interaction, with native trees and shrubs planted to assist or even kick start natural regeneration.

With assisted natural regeneration, the forest is encouraged to regrow by measures such as clearing invasive species or fencing land to prevent grazing.

Meanwhile, with ‘spontaneous natural regeneration’,  trees come back of their own accord.

The study highlights regions such as the Atlantic Forest in Brazil, where an area of 10.4 million acres has regrown since 2000.

This was through planned efforts to restore the forest, more responsible industry practices and other factors such as people moving towards the cities.

In Mongolia’s northern boreal forests, the study suggests 2.9 million acres of forest have regenerated in the last 20 years, thanks to conservation work by WWF and the Mongolian government’s increased emphasis on protected areas.

Central Africa and the boreal forests of Canada are also regeneration hotspots, according to the study, which examined more than 30 years of satellite data.

The study aims to help inform forest restoration projects around the world, giving a picture of where focusing action could be most beneficial.

It comes after a report from WWF earlier this year, showing that forests almost twice the size of the UK – some 106 million acres – was destroyed in global hotspots around the world between 2004 and 2017.

William Baldwin-Cantello, director of nature-based solutions at WWF, said that to avoid dangerous climate change and reverse the loss in nature, there was a need to halt deforestation and restore natural forests. 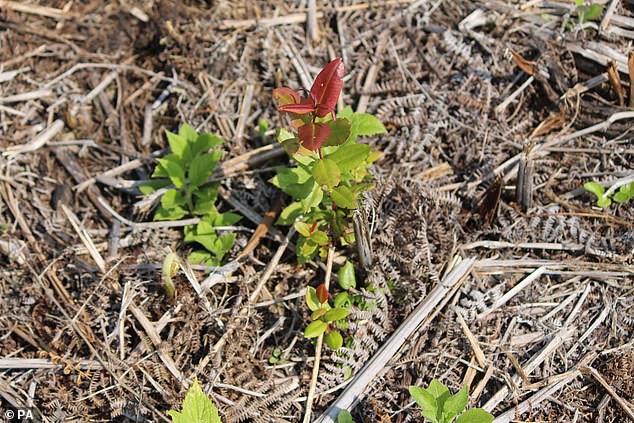 The Trillion Trees project, founded in 2016 to protect and restore forests worldwide, found that nearly 145 million acres of forests have grown back globally in 21 years

Rewilding our OCEANS will be ‘as important as reforestation’

Rewilding the oceans is as important to achieving ‘net zero’ climate change targets by 2050 as reforestation efforts, according to campaigners.

Britain’s coastlines cover an estimated 193,000 square miles and store about 205 million tonnes of carbon, 50 million more than the carbon locked up within UK standing forests.

Britain’s coastal ecosystems, including saltmarshes and kelp forests have been destroyed through intense fishing methods.

‘We’ve known for a long time that natural forest regeneration is often cheaper, richer in carbon and better for biodiversity than actively planted forests,’ he said.

Adding that ‘this research tells us where and why regeneration is happening, and how we can recreate those conditions elsewhere.’

Baldwin-Cantello said we can’t take the forest regeneration seen over the past two decades for granted, as deforestation still claims millions of acres per year.

He said the deforestation was claiming ‘vastly more’ trees than are regenerated.

‘To realise the potential of forests as a climate solution, we need support for regeneration in climate delivery plans,’ said Baldwin-Cantello, adding that we ‘must tackle the drivers of deforestation, which in the UK means strong domestic laws to prevent our food causing deforestation overseas.’

John Lotspeich, executive director of Trillion Trees, said: ‘This map will be a valuable tool for conservationists, policymakers and funders to better understand the multiple ways we can work to increase forest cover, for the good of the planet.

‘The data show the enormous potential of natural habitats to recover when given the chance to do so. But it isn’t an excuse for any of us to wait around for it to happen.’

The Trillion Trees project has published its 2020 impact report on its website.