It is being axed next year as the car-giant switches its strategic priorities to a new range of modern electric crossovers and SUVs ahead of the UK Government’s ban on new petrol and diesel car sales from 2030.

The American car giant, founded in 1903, is accelerating its ‘transition to an electric future’ in which it says all passenger vehicles will be fully electric by 2030 — and the rest by 2035.

That has required a complete rethink of the Ford model line-up.

Joining the existing Mustang Mach-e will be an electric Puma compact crossover, a medium-sized crossover and a sport crossover.

Also in the pipeline are four electric vans of varying sizes, based around the Ford Transit and Tourneo ranges.

For just as pioneering Henry Ford revolutionised car-making in the early 20th century with mass production from 1908 of the Model-T, Ford is now getting to grips in the early 21st century with a rival disruptor — Elon Musk’s Tesla.

And while Ford’s mainstream cars remain popular, it is its ‘trucks’ — from huge flatbeds and F-150s to big SUVs — that are most profitable. Put simply, the party’s over for Fiesta. But that doesn’t mean it is for Ford.

To pave the way for its electric future, Ford is to end production of the S-MAX family car and Galaxy multi-purpose vehicle in Valencia, Spain, in April next year and cease Fiesta production in Cologne, Germany, by the following June. UK production ended at Dagenham in 2002.

Six models at the end of the road

Ford said an electric version of the existing Fiesta — costing from £19,000 — was simply not viable.

The Fiesta nameplate is being retired to the unofficial ‘Ford Hall of Fame’ which already houses such legendary names as Cortina, Capri, Zephyr, Zodiac, Anglia (as used by Harry Potter), Granada, Sierra, Escort, Mondeo and — from 2025 — even the relative newbie Focus.

Ironically, the price of used Fiestas has soared as demand increased on news of its axing.

The bittersweet demise of the Fiesta marks a moment of sadness and nostalgia for a car that has touched millions, but is also a celebration of a model that over ten generations brought joy to so many.

More than 4.8million of the popular small family hatchback Fiestas have been sold in the UK since launch in 1976 — out of a total of more than 22 million globally.

It was the UK’s most-bought new car for 12 consecutive years from 2009 to 2020, but was knocked off the top spot last year by the rival Vauxhall Corsa. In its launch year a Fiesta even appeared alongside Roger Moore in the James Bond film The Spy Who Loved Me.

We often mark the passage of time through the cars we have owned, driven, or desired, and time, like life, does not stand still.

That was the mantra of former global Ford CEO Jacques Nasser (nicknamed ‘Jac the Knife’ for his cost-cutting zeal). He appreciated how important names were.

The Focus, for example, as replacement for the long-running Escort, was originally supposed to be called Fusion. But the name leaked out prematurely ahead of the car’s global launch at the 1998 Geneva Motor Show.

So furious was Nasser that he kept the new name top secret. At the eve-of-show unveiling dinner, which I attended, a special printing works was set up alongside to insert the name into press releases, only after he had revealed it on stage.

The name, said the then president of Ford with glee, was ‘Focus’.

With immaculate timing, Bentley has unveiled its new flagship SUV Bentayga Odyssean Edition, which is limited to just 70 examples worldwide.

It coincides with Crewe-based Bentley, part of the giant Volkswagen group, announcing record nine-month profits in its 103-year history boosted by a boom in bespoke personalisation through its Mulliner coachbuilding arm.

Priced from about £195,000, the new Bentayga Odyssean Edition goes on sale this month, ahead of a start of production in the first three months of 2023. 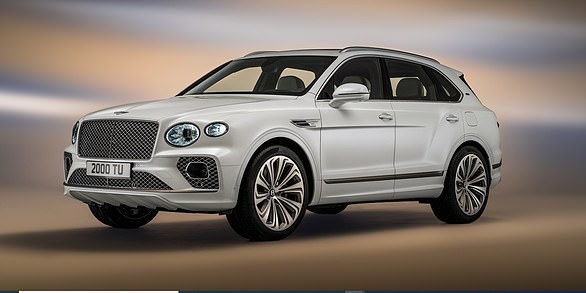 Powered by an electrified plug-in hybrid 3.0-litre V6 petrol engine linked to a 100-kW electric motor-generator, the luxury off-roader’s 462 hp propels it from rest to 60mph in just 5.1 seconds up to a top speed of 158mph.

Riding on 22in wheels, its new 18kWh battery brings an improved electric-only range of 28 miles to the Odyssean Edition and other Bentayga Hybrid models.

Environmentally friendly materials inside the vehicle include beautifully crafted tweed upholstery panels made from 100 per cent British wool created especially for Bentley. There are open-pore Koa wooden veneers on the centre console which use 90 per cent less lacquer than high-gloss veneers.

It has a three-colour interior and six special designs.

Bentley said that by 2025, its full line-up will be offered with hybrid powertrains, coinciding with the launch of the first ever all-electric Bentley.

It’s hybrid portfolio consists of seven models out of 14 in total.

Now Ford is having to focus on catching up Tesla and rivals by going big in electric. So change is inevitable.

It has started already with a bold move — as Ford dared to put the classic petrolhead muscle-car name of Mustang onto its electric zero-emissions Mustang Mach-e.

But that’s just the start.

Ford says it plans to sell more than 600,000 electric vehicles across Europe by 2026, and that electric passenger vehicle production at the Cologne Electrification Centre will reach 1.2million vehicles over six-years, noting: ‘At Ford in Europe, we are accelerating our efforts to go all-in on electrification with our passenger vehicles being fully electric by 2030 — and all vehicles across our Ford portfolio by 2035.

But Auto Express editor Steve Fowler said the demise of the Fiesta meant yet another affordable new hatchback was being denied to motorists on modest incomes, noting: ‘This isn’t just the death of a nameplate, it’s another affordable small car disappearing.’

But performance car-maker Abarth is using the technology to measure driver and passenger enjoyment.

In what it claims is a world first trial, it has turned to facial recognition technology to quantify the emotions experienced when driving. 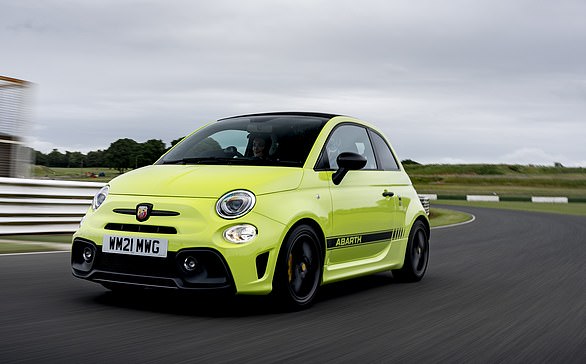 In tests at the Mallory Park circuit by Loughborough University’s digital health expert, Dr Dale Esliger, participants were put through challenges while driving one of three cars — an Abarth F595, 595 Esseesse and 595 Competizione.

Cameras linked to facial recognition software then detected an array of emotions, from happiness to excitement and fear.

Results showed the most prominent feeling during a fast ‘hot lap’ was happiness, both when behind the wheel (31.8 per cent) and as a passenger (35.4 per cent). The Abarth range starts from £22,245.