Furious customers are calling a best-selling Ford model ‘a lemon’ after seeing their new cars suffer multiple problems within months of purchase.

Issues have included the car engine’s dying, electronics malfunctioning and in one alarming case the brakes ‘slamming on’ without warning while a vehicle was doing 80km/h.

Compounding the issue have been long repair times and difficulty in getting Ford to provide loan or replacement vehicles.

Bianca Fitzsimmons, a 26-year-old from Newcastle along the NSW central coast, vows she will ‘never buy another Ford’ again after her Next-Gen Ranger died three times within months of purchasing the $77,000 vehicle.

More terrifyingly the pregnant tradie claims the Ranger’s brakes ‘slammed on’ without warning due to a impact collision system malfunction while the car was travelling at 80km/h.

‘It just slammed its breaks on.’

The mother-to-be said she was so thrilled to buy her first ‘really nice’ car she posed for a quintessential photo standing beside it in the dealership, complete with blue ribbon.

But Ms Fitzsimmons’ dream ride has spent more time at the repair shop than in her garage.

Bianca Fitzsimmons (pictured), 26, from Newcastle, said she will ‘never buy another Ford’ again after her brand new Next-Gen Ranger died three times within months of purchase

Ms Fitzsimmons, heavily pregnant, said she was ‘lucky’ to not suffer any injuries when the car suddenly activated its breaks while travelling at 80km/h

Just a month after she bought the ute it broke down half-way through a road trip to Queensland, while she along with her partner and their two dogs, spent four days days stranded in Taree, with a 14km walk to the nearest shop.

The vehicle had to be towed a second time but that wasn’t the end of the nightmare ordeal.

Ms Fitzsimmons said the ute malfunctioned for a third time when the electronics in the dashboard stopped working.

‘No speedo, no blinkers, no fuel gauge, nothing,’ she said.

Ms Fitzsimmons, now ‘furious’, believed she would be protected by Australian Consumer Law but was in for a rude shock when she received a letter saying her situation did not warrant a replacement.

‘It’s not like it’s a pair of jeans,’ Ms Fitzsimmons said.

She was forced to threaten protesting outside the Ford dealership before the company provided her with a new vehicle, which she finally received five months after warning the company of the car’s failures.

Her ‘lemon’ car is still in the repair shop. 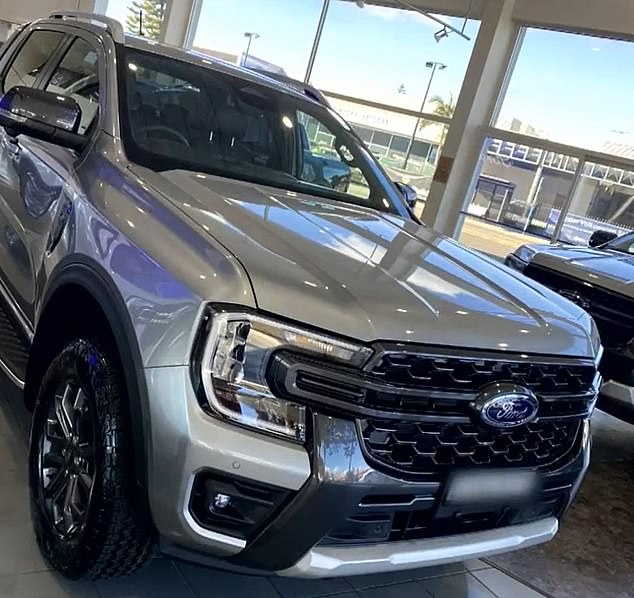 Dozens of customers have complained of problems with their ‘lemon’ Next-Gen Ford Rangers, with many new owners being forced to sign legal waivers while waiting for replacement vehicles

Ms Fitzsimmons is one of dozens of customers who have complained of problems with their Next-Gen Ford Rangers, with many new owners being forced to sign legal waivers as they wait for replacement vehicles.

For Alex Tomlinson his Next-Gen Ranger ‘was a dream’ but after a litany of issues, is something he ‘never wants to see again’.

Mr Tomlinson, a 22-year-old who lives in Ballarat in central Victoria, said he took his vehicle back to get fixed shortly after buying it and had to wait a month and a half.

After picking it up he noticed there were still problems and the next day the vehicle died altogether.

‘I was shocked,’ Mr Tomlinson said.

He has demanded a new car waiting which Ford has promised if he waives legal action against them, but the replacement vehicle is yet to appear.

Ford issued an apology to both the aggrieved customers.

‘We understand Ms Fitzsimmons and Mr Tomlinson experienced difficulties with their vehicles last year and together with our dealer teams we worked to diagnose the vehicle issues,’ a Ford spokesperson told Daily Mail Australia.

‘We recognize there were delays during that process and we apologize for the inconvenience this caused.

Ford’s website describes the Next-Gen Ranger as the ‘best’ it has built that is ‘tough, smart and versatile’.

The Ranger was the second highest selling vehicle in Australia last year.