Many diehard footy fans are seething due to frequent advertisements during Channel 7’s live coverage of the 2021 AFL Grand Final – as well as the network banning streaming options online.

Supporters of the Western Bulldogs, Melbourne Demons and neutrals took to Twitter in frustration when it became obvious early in the first quarter they needed a TV to watch the action live from Perth’s Optus Stadium.

‘For the first time in my life I cannot watch the Grand Final legally… It’s not on Kayo Sports, 7 Plus or the AFL app… my Smart TV and Apple TV are both too old to support the other streaming methods. Great work team,’ footy fan Jackson Davey sarcastically tweeted.

Plenty agreed with Mr Lewis, with another footy fan in Melbourne revealing ‘I am listening to it on the radio and following it on Twitter. Even though I have signed up to Kayo / Stan / Channel 7…Sucks when you don’t have a TV and are in isolation.’

Even with the AFL Grand Final in Perth, footy fans from Victorian clubs Western Bulldogs (left) and Melbourne Demons are watching the action live 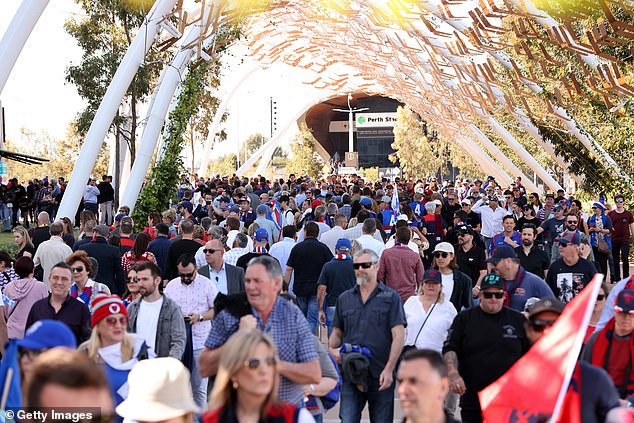 A crowd of other 60,000 have made their way to Optus Stadium in Perth for the 2021 AFL Grand Final 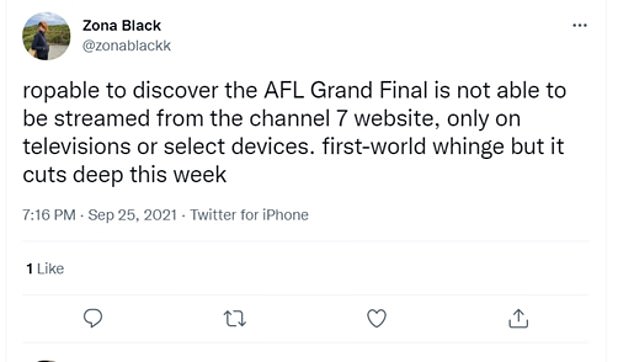 The most anticipated game of the year is being staged in Perth for the first time in front of a sell-out crowd of 60,000 fans at Optus Stadium due to the latest Covid-19 outbreak in Melbourne.

The Demons were first on the scoreboard with two behinds before Christian Petracca extended their lead to boot the first goal of the contest.

Luke Beveridge’s Bulldogs fought back strongly in the second quarter, finding themselves eight points up at halftime.

Footage of McGowan openly showing his allegiances to the Demons surprised Channel 7 commentators.

‘He’s made a statement there, I did not expect that,’ James Brayshaw said.

The sell-out crowd also enjoyed a pre-match entertainment line-up of Australian chart-topping anthems from the likes of Eskimo Joe and John Butler ahead of the first bounce at 7.15pm (AEST).

But not everyone watching at home was impressed, with some calling the musical entertainment ‘worse than Meatloaf’ – referring to American singer Meatloaf putting in a widely panned 12-minute performance at the 2011 AFL Grand Final at the MCG.

Bulldogs cult hero Bailey Smith had an unusual preparation when he arrived at the ground separately from his teammates after leaving his official player accreditation lanyard at the team hotel.

In AFL obsessed Melbourne, fans have gathered at a number of private venues to watch the big game – despite warnings from health officials to stay home.

It came after Victoria recorded 847 newly acquired Covid cases and one death on Saturday, the highest daily infection spike during the pandemic.