This is the extraordinary moment an orca was filmed hunting down and eating a stingray outside a waterfront home in front of shocked residents.

In footage shared to social media on Sunday, the pod of orcas were seen cornering a lone stingray as it flapped helplessly on the edge of the shore.

The killer whales, swimming in Marsden Cove Marina, to the north of New Zealand’s North Island, gave the stingray no room to escape.

Locals were seen gathering along the banks as they watched the life and death struggle unfold.

‘Oh there is the stingray he’s got it,’ a boy could heard screaming out.

As a huge orca swam by the white underside of the stingray could be seen held in its mouth as the predator made its way back out to sea.

Stingrays are known to be a significant part of an orca’s diet are regularly spotted by tourists suffering brutal deaths.

Orcas are known to stun stingrays by smashing them with their tail and cornering them in packs before tearing apart the marine animal.

It is not always a one way battle however with some marine scientists citing stingray barbs as a the cause of death for orcas found in the wild. 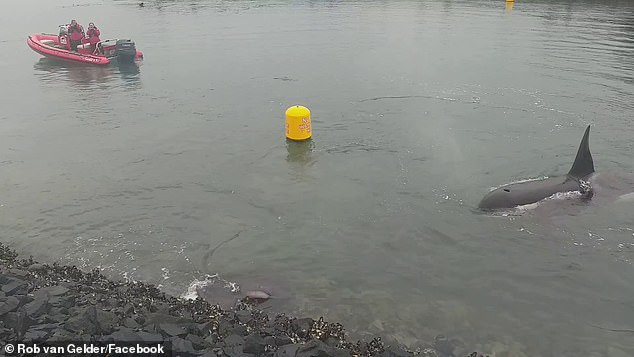 In footage shared to social media, the pod of orcas were seen cornering a lone stingray as it flapped helplessly on the edge of the shore 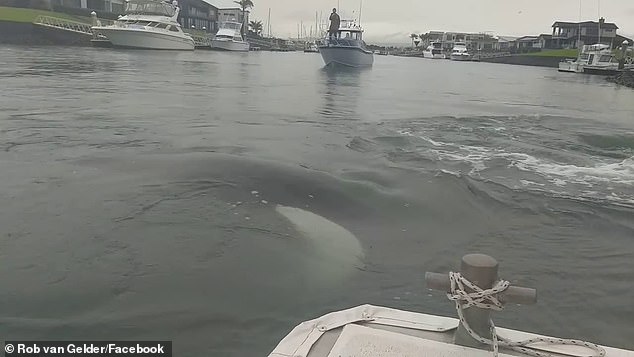