‘I’m Irish!’ Footage of Joe Biden dismissing a BBC reporter’s question because he is British reemerges in the wake of President’s ‘row’ with Boris Johnson over Northern Ireland peace deal

Video of Joe Biden dismissing a BBC reporter by playing up his Irish heritage is receiving renewed attention amid his reported row with UK Prime Minister Boris Johnson over the Northern Ireland peace deal.

Footage of the incident was captured during the Democratic Primary in 2019, and shows Biden acting frostily towards an employee of the British broadcaster.

‘Mr. Biden, a quick word for the BBC,’ the UK correspondent can be heard asking in the clip.

‘The BBC? I’m Irish!’ Biden declares, before walking out.

Biden is reported to only be about five-eighths Irish, but he is known for playing up his Irish heritage. It seems likely that the President would strongly back the country in their long-running dispute with Northern Ireland specifically and the United Kingdom as a whole.

Back in 1998, the US helped broker a peace deal known as the Good Friday Agreement that ended three decades of bloodshed between Catholics in Ireland and Protestants in Northern Ireland.

Earlier this week, The Times UK reported that Biden – who is a devout Catholic – ordered US officials to give Boris Johnson an extraordinary diplomatic rebuke for putting that peace process at risk over Brexit negotiations with the European Union.

‘President Biden has been crystal clear about his rock-solid belief in the Good Friday Agreement as the foundation for peaceful co-existence in Northern Ireland,’ White House national security adviser Jake Sullivan told reporters aboard Air Force One as Biden travelled to the UK on Wednesday.

‘Any steps that imperil it or undermine it would not be welcomed by the United States,’ Sullivan added. 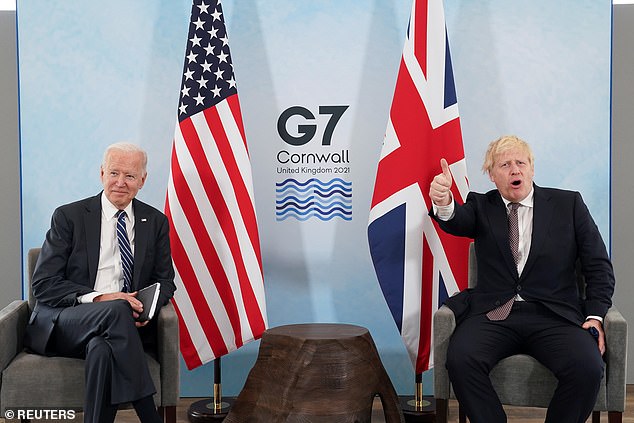 On Thursday, Biden met Johnson for the first time since he won the White House last November. The pair appeared friendly for the cameras, but they are at odds in their political perspectives

There is a June 30 deadline breathing down the neck of both sides as negotiations get contentious.

A spokesman for Number 10 Downing Street refused to be drawn on the White House criticism.

‘I don’t think you would expect me to get into discussions with other countries but I think we have been clear that we need to urgently find solutions that support the Belfast Good Friday Agreement and minimise disruption to communities in Northern Ireland, particularly to avoid disruption to critical supplies such as medicines,’ he said.

‘That is why we have been and continue to work closely with the EU to try to find pragmatic solutions that achieve those objectives.’

And on Thursday night, UK time, a spokesperson for Johnson insisted that Biden did not ‘rebuke him’.

Downing Street said the leaders ‘reaffirmed their commitment’ to the Good Friday during their discussions and ‘agreed that both the EU and the UK had a responsibility to work together and to find pragmatic solutions to allow unincumbered trade between Northern Ireland, Great Britain and the Republic of Ireland’.

The pair also put on a diplomatic display earlier on Thursday as they strolled along the seaside with their wives. 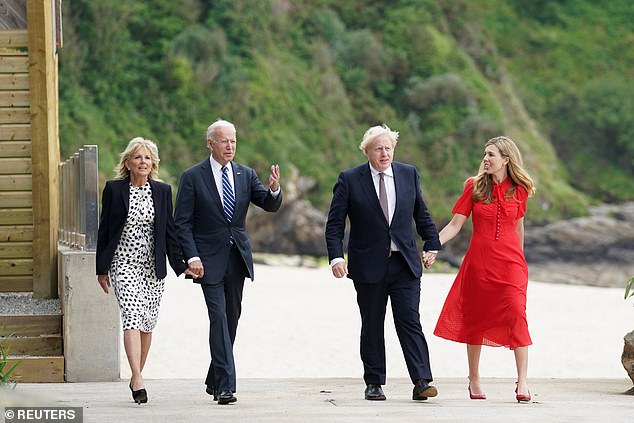 However, their alleged tension of the Northern Ireland deal also highlights the fundamental political differences between the two leaders.

Biden, the former chairman of the Senate Foreign Relations Committee who takes pride in his expertise in global affairs, was a staunch opponent of Brexit, the movement Johnson championed.

Biden also once called a Johnson a ‘physical and emotional clone’ of Donald Trump.