In a blizzard of posts on Twitter she dissected several of Mr Walliams’ best-selling children’s tales, picking out contentious characters and plot developments.

The food writer accused the Little Britain star of ‘targeting the working class’, and said  his stories recycled material from the controversial comedy show that made his name.

She began: ‘Small Boy completed his D*vid Walli*ms book collection today, so I finally decided to take a read of the latest. (It’s important to note here I’ve not bought a single one.) It’s like Little Britain for kids. 37m copies sold? Of this sneering classist fatshaming grim nonsense?’ she wrote on her Twitter profile, before adding: ‘a thread will now follow.’

Many of her followers agreed with her, while other stuck up for the comedy star.

Activist and food writer Jack Monroe has launched a withering attack on the children’s novels of comedian David Walliams, branding them racially insensitive and ‘fat-shaming’

She then went on to quote from the books, highlighting her grievances with the content to her 300,000 followers.

‘There’s a kid in this book called Ping Pong, and I’d find it difficult to believe that’s not a throwback to (the now derided racist trope) Ting Tong from LB [Little Britain].

‘But there are more than enough examples to be getting on with without gymnastics back through the ages, so I’ll continue.’ 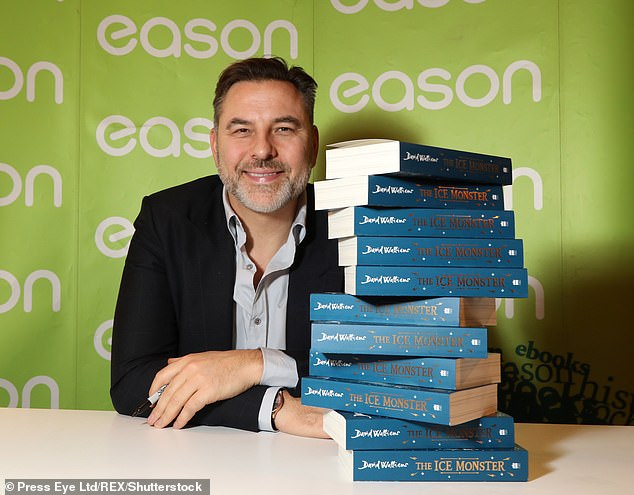 In November 2019 Walliams joined a select list of authors, including the likes of JK Rowling and Dame Jacqueline Wilson, to have sold more than £100 million worth of books 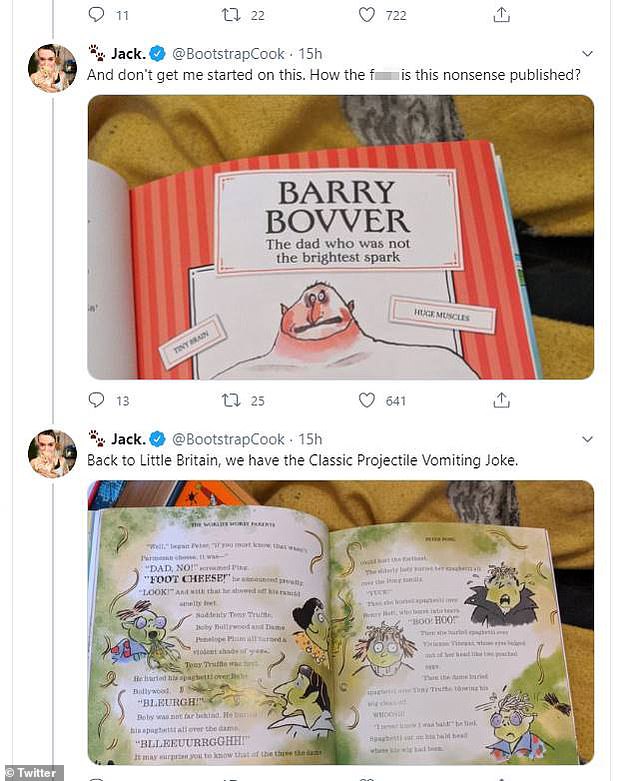 One example flagged up the apparent targeting of working class fathers (top), while another extract appeared to recycle and old vomiting joke previously used in Little Britain 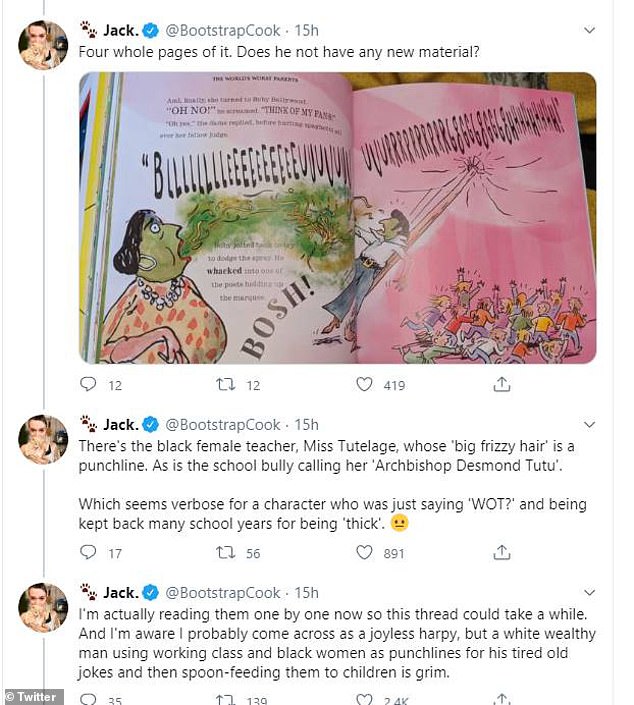 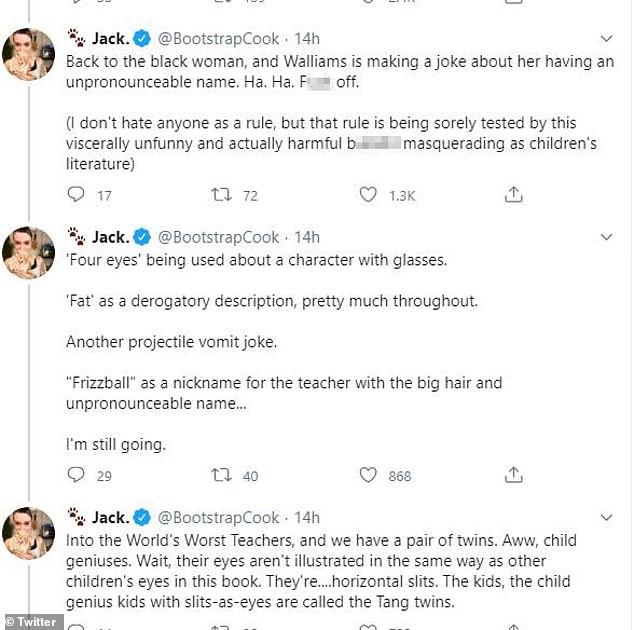 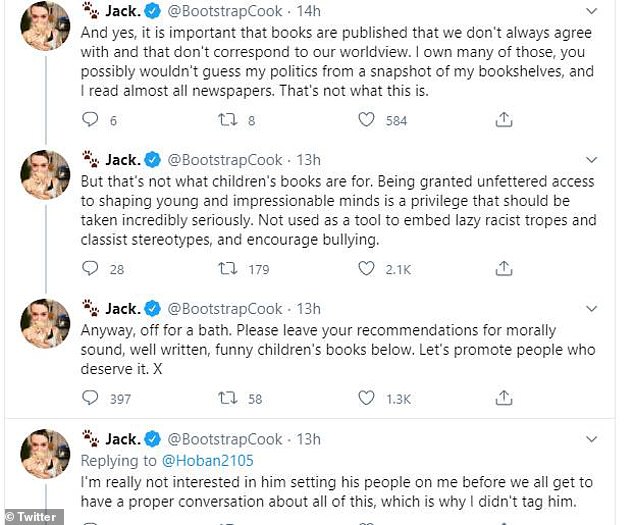 Jack Monroe: ‘Single mum of two – I’m not sure what qualifies her as being one of the World’s Worst Parents when all she does is love her kids and make them laugh?’

Quote: “Granville didn’t laugh exactly. If he found something funny, like the misfortune of poor people…”

Monroe: ‘You what mate? Had to close the book at this point and have a small chat with my Small Boy about how ‘misfortune’ and ‘poverty’ aren’t punchlines for jokes.’

‘BLLEEUURRGGHH!’ It may surprise you to know that of the three the dame cold hurl the furthest.

Monroe: Back to Little Britain, we have the Classic Projectile Vomiting Joke. Four whole pages of it. Does he not have any new material?’

Continuing on her Twitter tirade, the food writer went on to draw up cases of alleged racial undertones in the writing of Mr Walliams, noting: ‘There’s the black female teacher, Miss Tutelage, whose ‘big frizzy hair’ is a punchline. As is the school bully calling her ‘Archbishop Desmond Tutu’.

‘Which seems verbose for a character who was just saying ‘WOT?’ and being kept back many school years for being ‘thick’.

‘Four eyes’ being used about a character with glasses. “Fat” as a derogatory description, pretty much throughout. Another projectile vomit joke. “Frizzball” as a nickname for the teacher with the big hair and unpronounceable name… I’m still going.’ she added.

The thread received mixed responses, though many Twitter users expressed similar opinions about Mr Walliams work which they had felt previously unable to air.

One Twitter user, Michaela Deas, replied: ‘Oh thank the deities someone has finally said it! Cannot abide those books. Dreadful, racist, classist dreck. Have never understood why they are even remotely successful. Thank you, Jack x’

Another, under the username @Miss Lupescu67, added: ‘He makes my skin crawl. His books are an awful influence on their readers and it makes me seethe that he gets such a huge amount of promotion over far more talented writers because he was “a name.” He even gets to appear at so many of the childrens Literature events.’

Mr Walliams’ most recent literary creation, ‘the Ice Monster,’ has just been released in audiobook format and was being promoted over social media throughout Monday.

His many adoring fans were quick to praise the work. One Twitter user, Julie-Ann21, responded to the @DavidWalliams Twitter account: ‘Fabulous illustrations, great book every success with new book too it’s very good, funny and illustrated so well, I hope more people go and get a copy.’

In November 2019 David Walliams joined a select list of authors to have sold more than £100 million worth of books.

He has regularly topped the annual list of bestselling authors since his 2008 debut, The Boy in the Dress – which alone has sold over one million copies worldwide.

The publishers of Mr Walliams’ literature have been contacted for comment.