Europe gives the green light to MEALWORMS as a safe source of human food and says they can be consumed whole, dried or as a flour

Good news for those with the insect-eating bug, for mealworms are to become the first creepy-crawly to be approved in Europe as a safe source of food for humans.

The decision — announced today by the European Food Safety Agency — paves the way for the crunchy yellow grubs to be eaten whole, dried or even to make flour.

Despite their name, mealworms are beetle larvae, rather than worms, and are already used in Europe as an ingredient in pet foods.

The safety agency has warned, however, that people with allergies to crustaceans and dust mites might experience reactions to eating mealworms.

Accordingly, insects are often touted as a sustainable food source for the future, fostering an industry worth £297 million that is likely to double or triple by 2024.

With mealworms being rich in fibre, fat and protein, the larvae are likely to be just the first bugs to hit dinner plate on the continent in the coming years, European Food Safety Agency chemist and food scientist Ermolaos Ververis told Reuters.

Under his supervision, mealworms became the first insect that the agency assessed under a ‘novel food’ regulation that came into effect back in 2018.

The new rules have reportedly triggered a flood of similar applications for other edible insects to be approved for widespread consumption.

‘There is great interest [from] the scientific community and also the food industry in the edible insect sector,’ Mr Ververis said.

The application for the approval of mealworms was submitted by Micronutris, a French-based insect farm focussed on rearing insects for human consumption.

‘There are clear environmental and economic benefits if you substitute traditional sources of animal proteins with those that require less feed, produce less waste and result in fewer greenhouse gas emissions,’ said economist Mario Mazzocchi.

‘Lower costs and prices could enhance food security and new demand will open economic opportunities too, but these could also affect existing sectors,’ the expert from the University of Bologna, Italy, added. 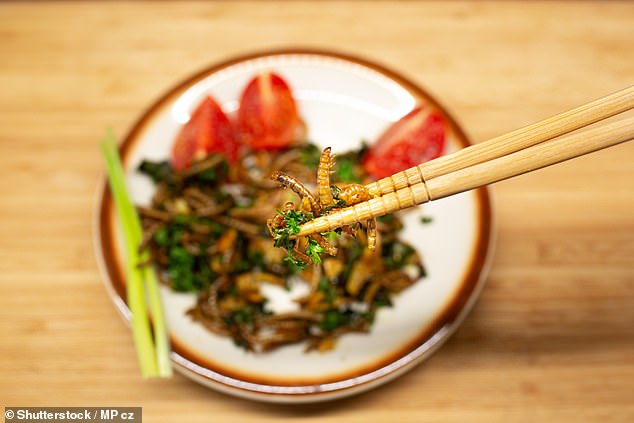 The decision — announced today by the European Food Safety Agency — paves the way for the crunchy yellow grubs to eaten whole (as pictured), dried or even to make flour

In many parts of the world — including areas of Africa, Australia and New Zealand — insects are readily consumed both on their own and in the form of insect bars, cricket burgers and other bug-based foodstuffs.

Once the European Commission ratifies the European Food Safety Agency’s mealworm endorsement, our continental neighbours will join them.

Some sociologists, however, believe that psychological barriers to the eating of insects are particularly strong in Europe, meaning it may be some time before the mealworms start flying off of supermarket shelves there.

‘There are cognitive reasons derived from our social and cultural experiences — the so-called ‘yuck factor’ — that make the thought of eating insects repellent to many Europeans,’ said food consumer researcher Giovanni Sogari.

However, added the expert from Italy’s University of Parma, ‘with time and exposure, such attitudes can change.’

The European Food Safety Agency said that it has received 156 applications for ‘novel food’ safety assessments since 2018 — covering everything from algae-derived foods to an array of insect species.

COULD INSECTS BE THE NEXT ‘SUPERFOOD’?

Edible insects have been touted as the next ‘superfood’, with the creepy crawlies packed full of protein, nutrients, potassium, magnesium and three times more fatty acids than omega-3 in salmon.

Insects contain more than twice as much protein per 100g as meat and fish, according to the Food and Agriculture Organisation of the United Nations.

Crickets are the most widely cultivated insects for the human diet across the world and are considered the ‘gateway bug’ for people who choose to eat insects.

They, along with other insects are touted as highly nutritious and much better for the planet – environmentally and financially – than traditional livestock, due to the comparatively efficient rate at which they convert feed into body mass.

The global population is predicted to top nine billion by 2050, putting enormous pressure on the environment, conventional food sources and farming techniques. Insects could help meet demand for food.

Plenty of people in non-Western countries already eat insects regularly. They are very efficient at converting vegetation into edible protein and full of vitamins and minerals.

Previous studies have found that four crickets provide as much calcium as a glass of milk, and dung beetles, by weight, contain more iron than beef.

Farming insects generates one-tenth of the methane produced by farming traditional meat sources, and it uses comparatively little water, making the process better for the environment.