It’s just past 10pm on the softest of Welsh summer nights and the whole room shakes to a throbbing bass beat. There’s a disco light, cutting through the Stygian gloom, and a half dozen black-clad men, their biceps heavily inked, armed with the sharpest knives.

At the centre, their leader, towering above them all, head shaved, his mighty frame hewn, it seems, from granite. A blade glints menacingly in his hand as his eyes bore into my skull.

In normal circumstances, I’d be getting ready to run like hell. This is not the sort of fella you would want to annoy.

But this isn’t an edgy nightclub. It’s a restaurant that has just been crowned the UK’s Best, at The Estrella Damm National Restaurant Awards.

And that fearsome figure, Gareth Ward, is one of the world’s most exciting chefs.

Ahead of my visit and confirming my booking, the restaurant emailed me to say: ‘Be aware, we are possibly not the best place for a business meeting or an intimate first date.’ This turns out to be a gargantuan understatement.

Tom Parker Bowles bagged a table at Ynyshir, near the Snowdonia National Park, which has two Michelin stars

And bagging a table at Ynyshir, near the Snowdonia National Park, wasn’t easy. With two Michelin stars, it was booked up months in advance before this recent accolade. There’s more chance of that camel passing through the eye of a needle than getting a couple of seats here.

But I begged, pleaded and cajoled, before eventually (thanks to that fine Brummie blogger Simon Carlo, the man behind Meat and Two Veg) managing to secure a table.

Because of the national train strike, there was a vacancy. The next day. Hallelujah!

I ring Giles, my friend and fellow restaurant critic. ‘You in?’ I ask. His answer involves bears and woods, and hell yes.

To be honest, I was in two minds. Yes, I’d heard the rave reviews, from friends and industry types alike, but I’m pretty fed up with over-priced and underwhelming 30-course tasting menus and avoid them like a bad oyster.

Did I really want to sit in respectful silence as one over-worked morsel after another was placed reverentially before me on a strange-shaped plate, accompanied by a long explanation of what I was about to put in my mouth? 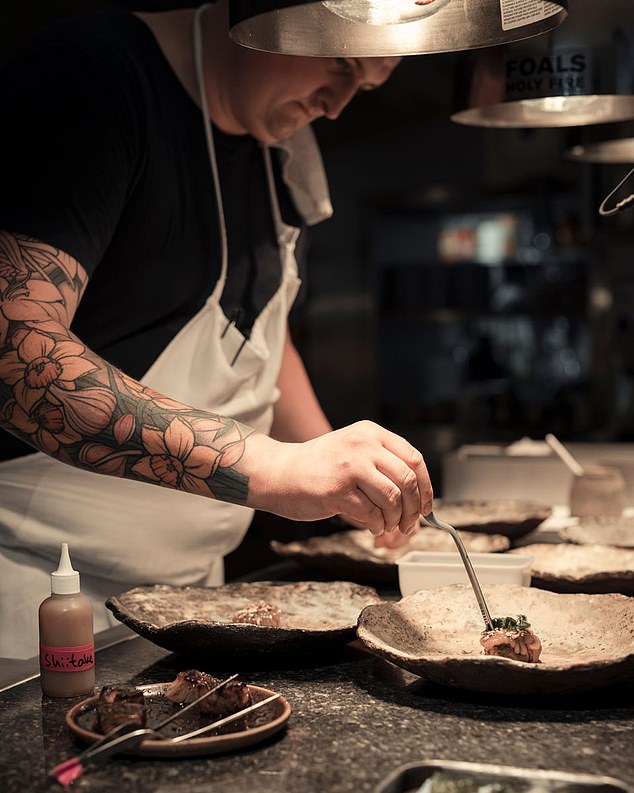 Gareth Ward (pictured) is head chef and co-owner of Ynyshir, the most highly-awarded restaurant in Wales

Such constant interruptions make any decent conversation impossible. I find myself dreaming of simplicity – a great fat steak, or bowl of pasta, or anything rather than sitting, trapped, by the relentless tyranny of the tasting menu.

Sure, there are places that linger in the memory long after the last edible rock, or ‘spherified’ olive. Noma, for one: the Copenhagen restaurant once voted Best in the World. The Fat Duck, Heston Blumenthal’s three-Michelin-starrer in Bray, in Berkshire, and El Bulli (now closed, but which also held three stars in Spain) are two more: places where high culinary art melds with theatre, nostalgia and a genuine sense of joy.

There’s a thin line between genius and downright pretentious. Still, once past Birmingham and into Wales, on a brilliantly sunny day, our spirits are high. 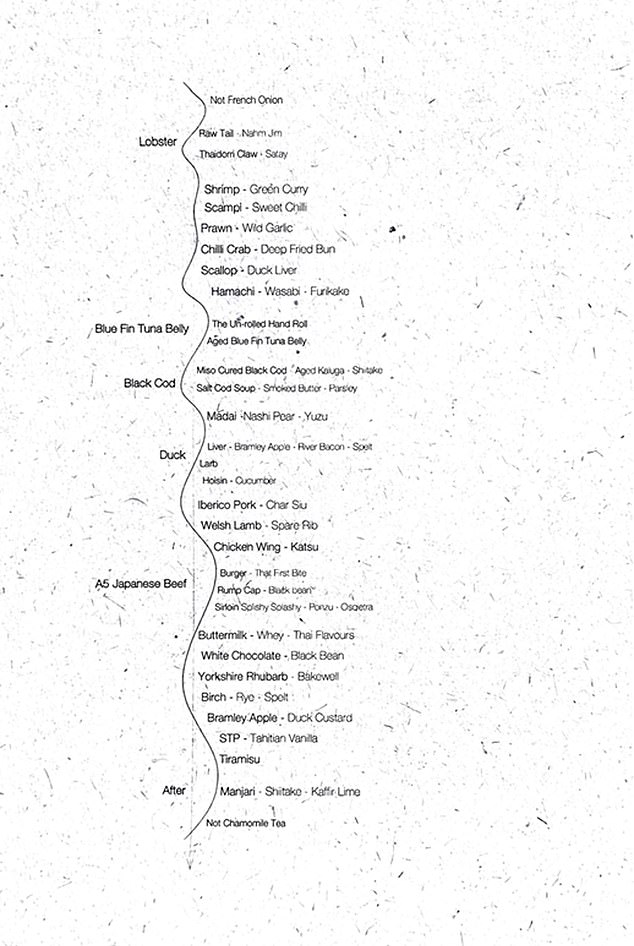 This feels like a mission, a journey, an old-fashioned adventure, as we drive through the most verdant countryside, all soaring hills and swooping valleys, the whole thing as lush as fresh-churned butter. When we eventually arrive, it’s impossible not to fall for Ynyshir, a small hotel sitting among wildflower meadows and cedar trees, as lovely a location as you’ll find anywhere.

A drink first, in a black-painted room, the heavy, wooden chairs draped in sheepskin rugs. Fires crackle outside, heavy fur coats hang on the wall. The whole place feels a bit Game Of Thrones. Without, we pray, the blood-spurting excess.

A glass of sparkling Gusbourne (from vineyards in Kent and West Sussex), and then back to the front desk where a panel slides back to reveal some of the night’s ingredients. Local eggs, cream, crab and strawberries; A5 grade Japanese wagyu beef, with great alabaster swirls of fat; blue fin tuna, sustainably caught, with a slab of hamachi (or yellowtail); a knobbly wasabi root and Thai kaffir limes. 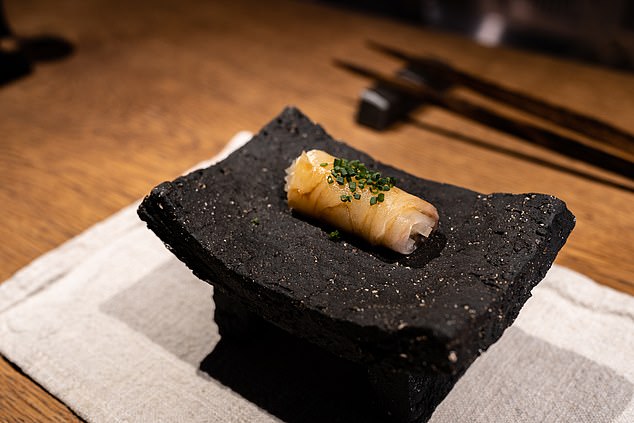 Ynyshir restaurant served up a mixture of native and far-flung – a whisper of Japan, a nudge of Thailand and a great Welsh grin, said Tom Parker Bowles

It’s a mixture of native and far-flung, a whisper of Japan, a nudge of Thailand, a great Welsh grin.

Music plays in the background, smoke scents the air, and around us, our fellow diners – a mix of middle-aged Michelin devotees, and shorts, trainer and tattoo-sporting young thrusters – talk excitedly. You can almost taste the anticipation.

Our first course is eaten standing up, at that front desk. ‘Not onion soup’. Rather, an immaculate chawanmushi, or Japanese savoury custard, with a tiny slice of miso-cured duck liver, herb oil, croutons and dashi stock poured on top. It’s subtle, gentle and discreet, slightly sweet with a pure umami depth. Nothing showy or wacky, just classical Japanese cooking of the highest order. I look at Giles. And grin. This is going to be fun. And so it begins.

We sit, like two pampered Renaissance princes, in high-backed wooden chairs, no more than 3ft from the open kitchen, our backs to the rest of the room. For a moment, we look longingly at the table in the corner, next to the window, where we could gaze out over the gorgeous July evening.

I tend to avoid chef’s tables, preferring the calm of the dining room to the clatter and bustle of the kitchen. This, though, is a prime spot. And as Air trills through the speakers, we gird our bellies and prepare for the battle ahead.

There’s a studied calm to this kitchen, an intensity and precision, as the brigade cut, slice, sniff, mix and taste.

At the centre is Ward, like some legendary warrior, surrounded by his adoring army.

Everything revolves around the great man, who learnt his trade at Hambleton Hall in Rutland first, the perfect introduction to classical cooking. And then on to Sat Bains and his eponymous Nottingham restaurant. For me, he is one of the most innovative and downright brilliant chefs there are.

A pretty bowl containing a slice of raw lobster tail in nahm jim dressing starts things off with a glorious bang. Buried under a green blizzard of coriander and holy basil, the shellfish is as sweet as a first kiss. With a Thai dressing that doesn’t pull any punches; fish sauce, lime juice and chillies. Lots and lots of chillies.

Dear God, it’s good, blessed with that balance – of the hot, salty and sour – so crucial to Thai cooking.

Next, a tiny chunk of claw, in a proper satay sauce, rich and slightly sweet, with a slow-burning heat. Another exquisite bite, both dishes pure culinary foreplay, teasing and titillating the palate, stimulating the senses for the pleasures ahead.

It’s not all big, bold swagger. After a buttery, funky slap-you- in-the-face-good Singapore chilli crab, heavy on the roe and slathered all over a deep-fried bun, we get a pristine scallop, cool and assuredly elegant.

A creamy, salt cod veloute is as smooth as a Roger Moore chat-up line. Thai duck larb is all verdant, offally, chilli-spiked crunch.

There’s a lamb spare rib, wearing nothing but salt and the fire’s char, as fine a piece of meat as I’ve ever eaten. And a pink-hued slice of char siu Iberico pork, all melting fat and luscious pigginess, that’s up there with the very best Cantonese roasted meats.

The most delicate of blue fin tuna loins, sliced paper-thin, with summer truffle, appears after a chunk of langoustine tempura, the gossamer batter clinging to the flesh like a silk negligee.

Soft-serve strawberry ice cream is followed by a divine mini Bakewell tart, and a chunk of sticky toffee pudding that stops all conversation dead. Chef Gareth Ward skips from Thailand to China and Japan, with a little Britain thrown in, too.

What’s truly impressive is that every dish works, never making any claims as to authenticity, yet capturing the very essence of these cuisines. To have such consistency and confidence over so many different courses, styles and techniques is nothing short of astonishing.

As the evening goes on, the lights darken and the music becomes louder and more intense, so the ballet of the kitchen seems to move faster, following the electronic beat, as cooks glide around as one.

Our sommelier, cool, calm and softly spoken, suggests wines and sakes and mescals to go with each course. There’s no upsell, no talking down, just well-thought- out pairings, which we slurp and gulp with merry abandon. It’s been more than four hours now, or is it five? 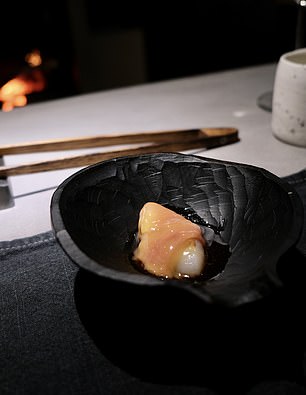 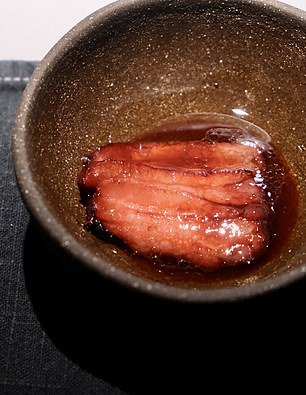 At this point, we no longer know or care, we are so caught up in the drama of the whole thing, feeling the heat of the flames on our face, hearing the sizzle of fat on hot coals. There’s a rhythm to the dinner, a joyous ebb and flow, both in-your-face visceral, and strangely calming, too.

OK, Ynyshir is not for everyone. It’s a long way from the tranquillity of The Waterside Inn, say, although the cooking is equally exalted. And did I say it’s loud, very loud. By the end, we could be on the dancefloor of a 1990s illegal rave.

Those with an aversion to chilli, and the magnificent funk of fish sauce, should steer clear.

In these straitened times, it could be seen as excessive, even obscene. But while some people are happy to spend £500 on a flight to New York, or a football season ticket, others choose to spend their hard-earned cash on food. Who are we to judge?

The Dinner Room package gives you dinner and a night at the hotel (and a very fine room it is) for £495. For me, that is true value.

‘Thank you for making the epic journey to Ynyshir,’ reads the message at the bottom of the bill.

I may not be eating for the next few days. But this is no mere dinner – rather a dazzling, beguiling and utterly thrilling multi-sensory extravaganza. Gareth Ward is a master. Ynyshir is a blast.