Hilton’s most luxurious European hotel has flung open its doors – and here we take a peek inside.

The Biltmore Mayfair will undoubtedly be a huge hit with the well-heeled.

It’s in London’s Grosvenor Square, the former home of the American Embassy and one of the UK capital’s most exclusive postcodes, Michelin-star restaurateur Jason Atherton is overseeing its restaurant – and personalised embroidered pillows are an option. 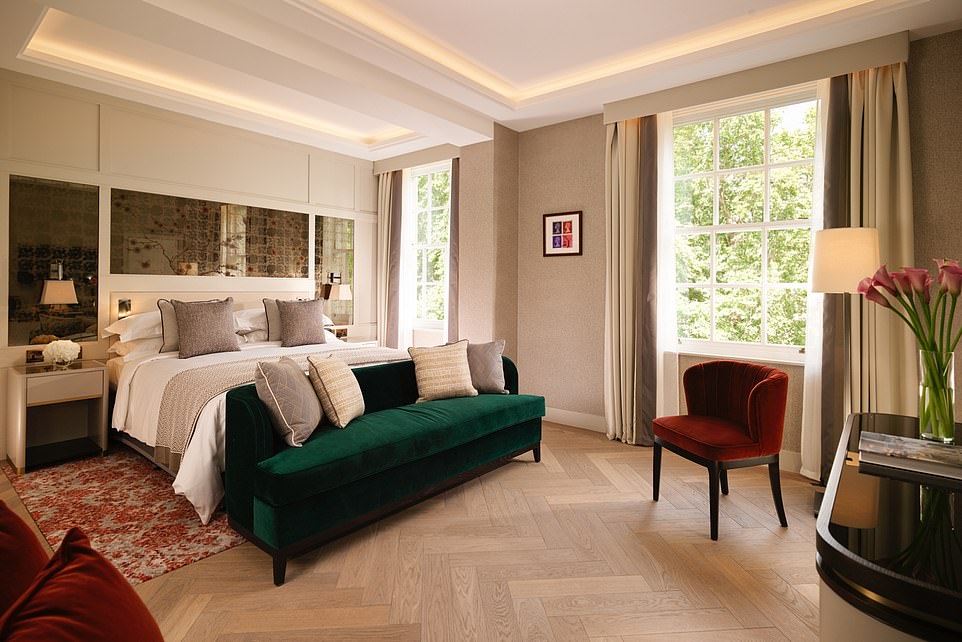 The Biltmore Mayfair will undoubtedly be a huge hit with the well-heeled. It has 307 rooms in total, with 57 suites and eight signature suites. Pictured is a King Grand Premier room

The 307-room hotel is the first in Europe from Hilton’s LXR Hotels & Resorts collection, which offers ‘legendary luxury properties designed to both thrill and comfort you’.

Hilton said that The Biltmore is a ‘new jewel in the neighbourhood’, a ‘decadent retreat’ that ‘unites 20th-century grandeur with modern architectural details’.

The embroidered pillows are an option for guests staying in one of the 57 ‘beautifully designed suites’. They can also request a monogrammed bathrobe.

Book one of the eight ‘signature’ suites and you’ll have access to a quilted, leather-encased cabinet holding full-size bottles of Champagne, with complimentary non-alcoholic mini-bar drinks available throughout the stay. 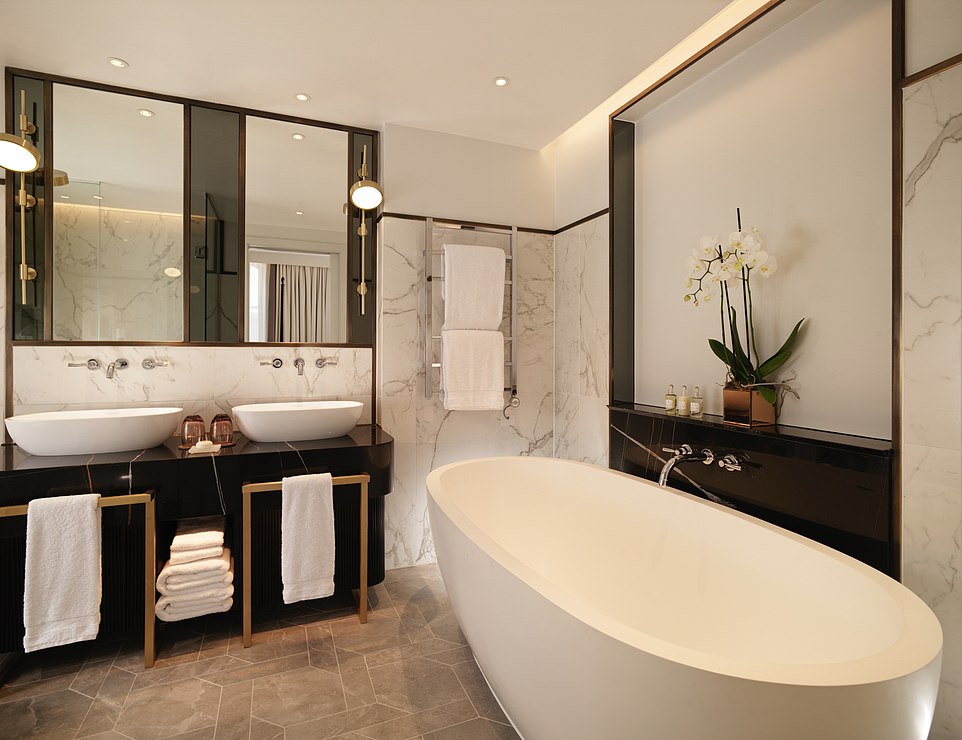 A bathroom in a King Premier Suite. Embroidered pillows are available to suite guests, along with monogrammed bathrobes 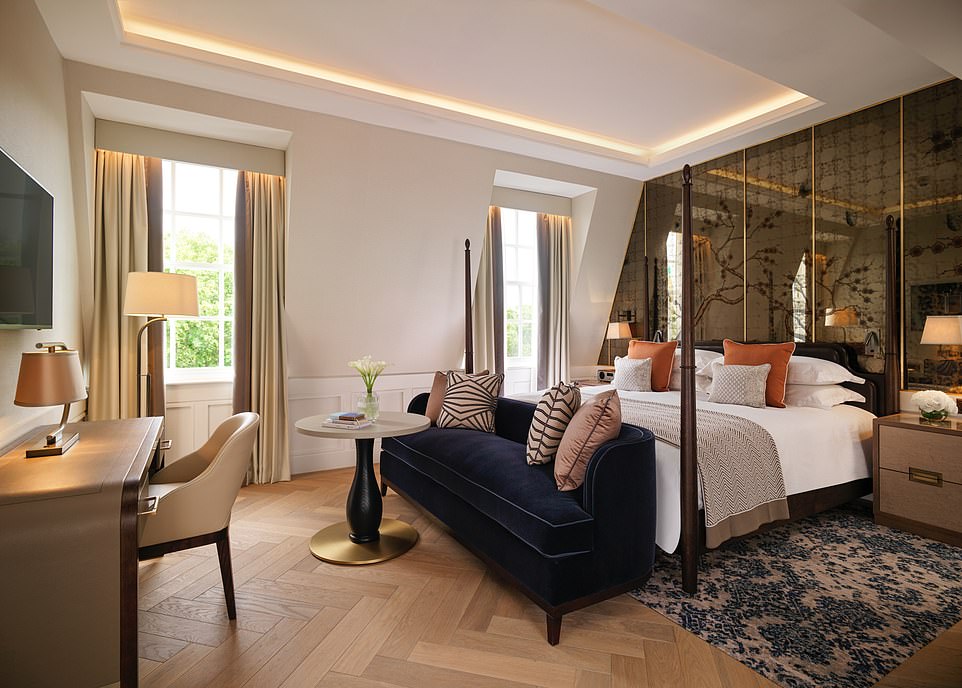 Quintessentially British amenities by Penhaligon’s, meanwhile, are provided in all bathrooms.

Mr Atherton’s restaurant is called The Betterment, and it certainly sounds like bait for the Michelin judges.

The head Chef is Paul Walsh, who launched and led Jason Atherton’s City Social for five years and achieved the restaurant’s Michelin-starred status within seven months of its opening.

The Betterment is said to feature ‘a seasonally driven menu, from locally-sourced fish and meats that are wood-fired, to signature salads and plant-based dishes’.

At the heart of the restaurant is ‘a dramatic and rustic open grill, partially hidden behind frosted glass but exposed in a way that brings the kitchen into the dining room and adds a sense of theatre to the space’.

Dishes are roasted over the embers and designed to share, including the likes of roast chicken, trompettes with Albufera sauce (£40) and native lobster with a white port bisque (£20 half/£40 whole). 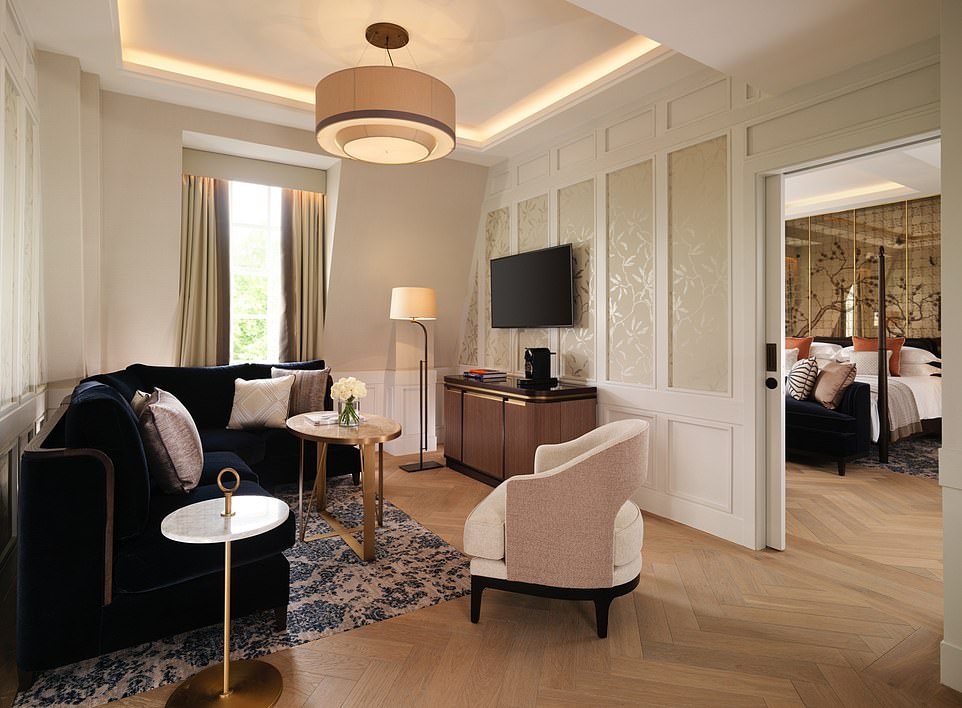 Quintessentially British amenities by Penhaligon’s are provided in all bathrooms. Above is the living room area in a King Premier Suite 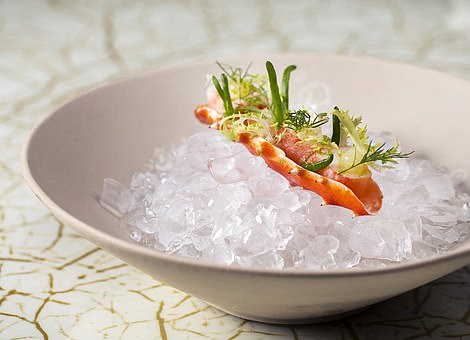 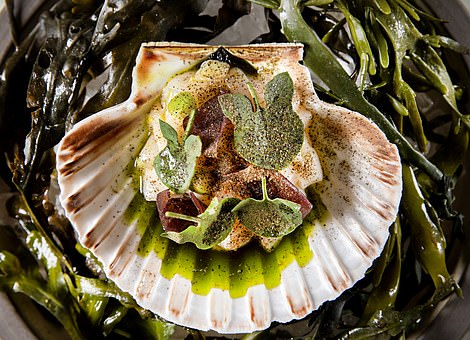 The food at The Betterment promises to be mouthwatering. Pictured left is king crab, yuzu and lime. On the right is raw Orkney scallop, pear and sorrel 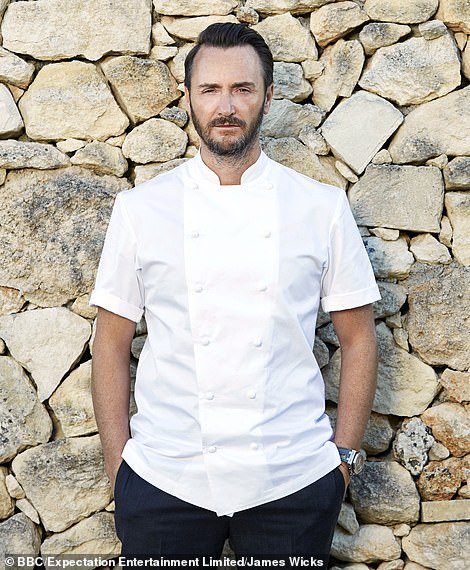 Jason Atherton, star of the BBC’s The Chefs’ Brigade, is overseeing The Biltmore Mayfair’s restaurant

Sides ‘have been designed to impress’, with dishes allowing guests ‘to journey across the world’, ranging from confit Basque peppers (£12), beef dripping chips with truffle and mushroom ketchup (£12) and New Forest wild mushrooms with smoked egg yolk (£12).

Overseen by Head Sommelier Stefan Kobald, the wine list comprises over 800 bins ‘celebrating the best winemakers from around the world whilst championing new producers and small winemakers’.

With classic French wines at the core of the list, the curated selection ‘sees the old-world brush shoulders with the new’ and features ‘exciting blends from Austria, Germany, America and Italy’.

There’s a bar too, of course, called The Pine Bar, which offers ‘classic cocktails, exceptional wines and delicious bar snacks, including home-cured charcuterie’.

Tea drinkers are catered for as well.

The Tea Lounge, in the lobby, is the place to go for the ‘finest afternoon teas’ and sweet treats including ‘Dorset spice apple cake and lemon and lavender macarons’. 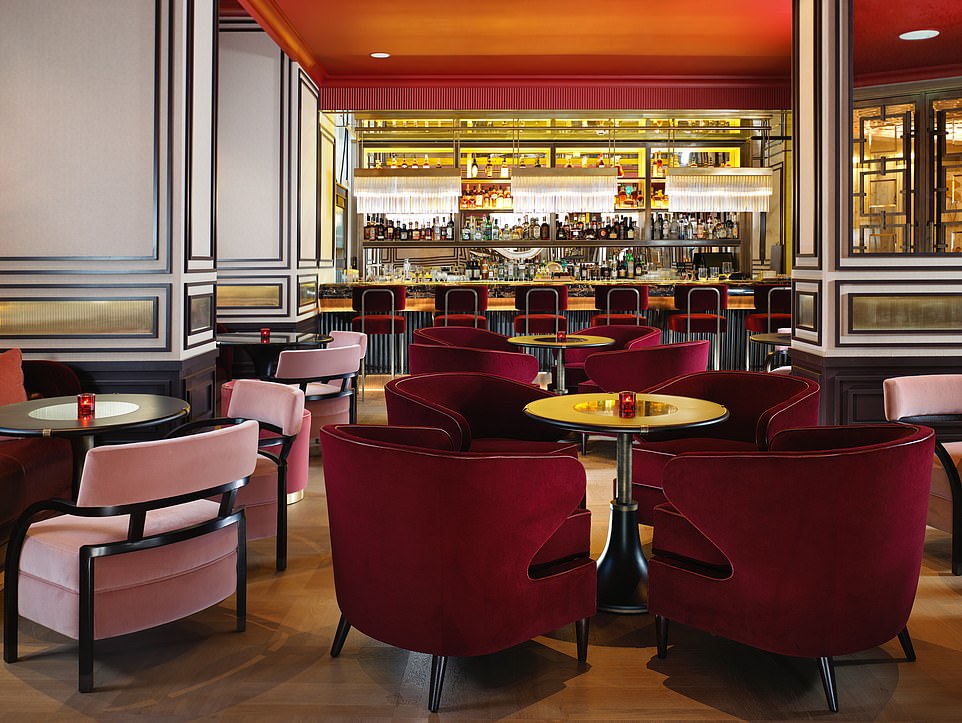 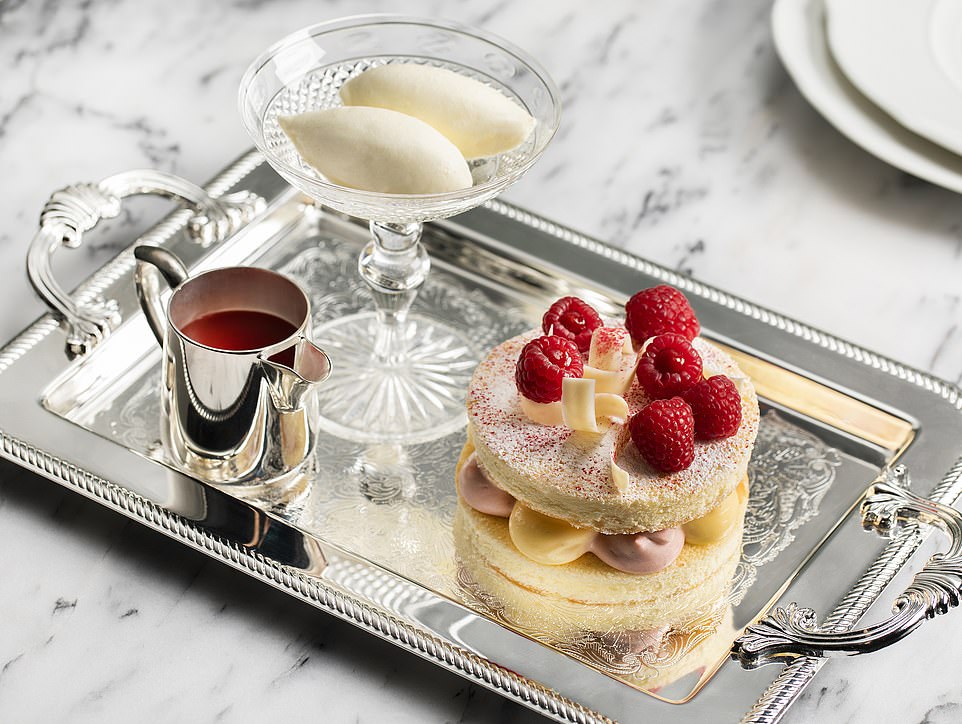 The Tea Lounge, in the lobby, is the place to go for the ‘finest afternoon teas’ – and sweet treats. Above is the Lounge’s version of a Victoria sponge 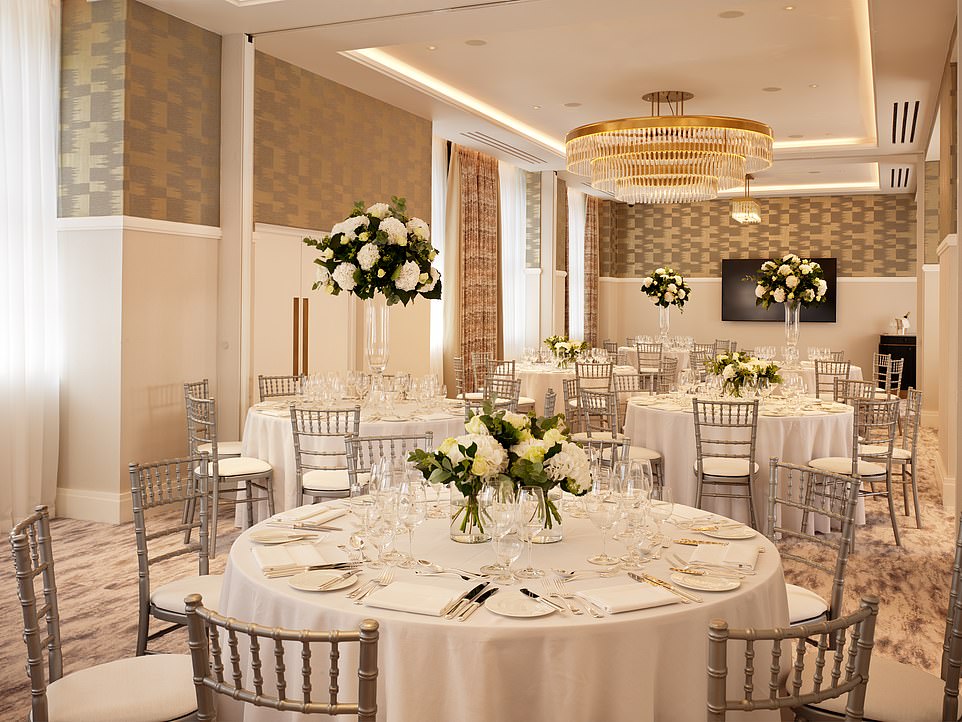 Hilton said that The Biltmore is a ‘new jewel in the neighbourhood’, a ‘decadent retreat’ that ‘unites 20th-century grandeur with modern architectural details’

Finally, within the heart of the hotel, is The Terrace.

This is an open-all-year alfresco area surrounded by ‘stunning floral arrangements’ and ‘glimmering fairy lights’. ‘The perfect spot,’ Hilton says, ‘to drink and dine under the stars.’

Jason Atherton, the star of the BBC’s The Chefs’ Brigade, said: ‘The Biltmore Mayfair has been an incredibly exciting launch to be involved in, and I’m thrilled that the day has come where we can finally show off The Betterment to you all.

‘We’ve focussed the menu on sharing dishes and innovative sides, which draw on flavours from all around the globe. With its year-round terrace and relaxed atmosphere, the aim is to offer affordable luxury that injects a bit of fun into London’s most elegant district. It’s been nearly a decade since I left Maze and Grosvenor Square and I couldn’t think of a better way to be returning – especially with world-class chef and friend, Paul Walsh, by my side.’

Visit thebiltmoremayfair.com or call +44 (0) 20 762 99400. For reservations at The Betterment email Reservations.Betterment@Hilton.com. Other posh London hotels are available.