Thousands of floral tributes and Paddington Bears left in memory of the Queen in Green Park and Hyde Park have started to be cleared away.

Staff and volunteers from the Royal Parks charity were seen picking up the tributes and placing them in carts pulled by two Shire horses.

They will be taken to the Leaf Pen in Kensington Gardens where the flowers will be blended with leaf litter and other green waste, to be composted and turned into mulch.

The toy teddies are to be stored in a room within the parks until it is decided what to do with them.

All of the flower-made compost will be used on shrubs and trees which will be enjoyed by millions of visitors in the coming year.

Andrew Williams, Park Manager, Kensington Gardens, The Royal Parks, said: ‘The thousands of tributes that have been left held great sentiment for the people who travelled from all over the country to mark their respects for The Queen and they have created a tranquil and beautiful garden visited by so many.

Paddingtons and flowers were left in tribute to Her Majesty after her death at 96, with hundreds of the little bears left behind 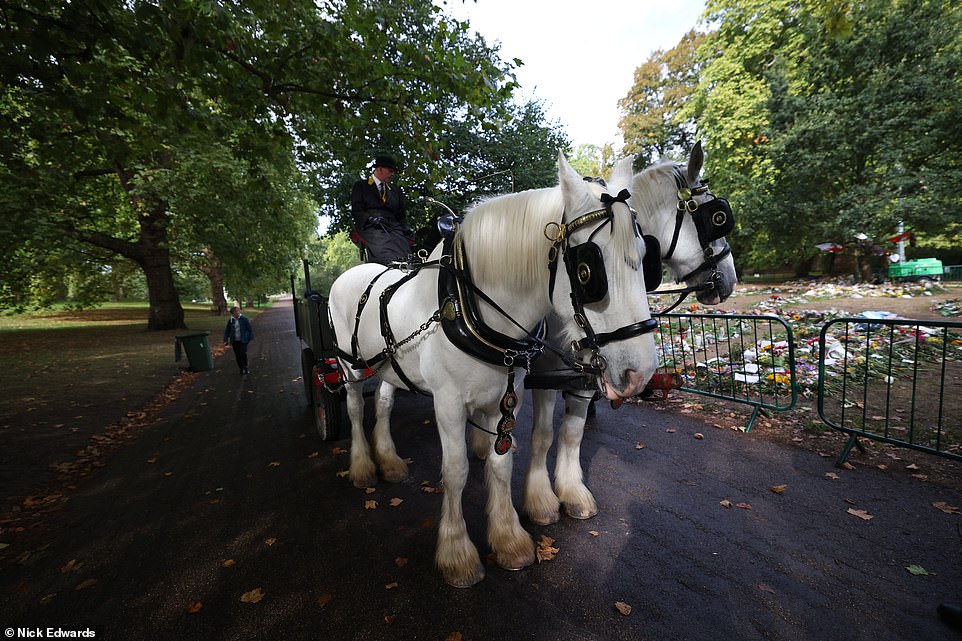 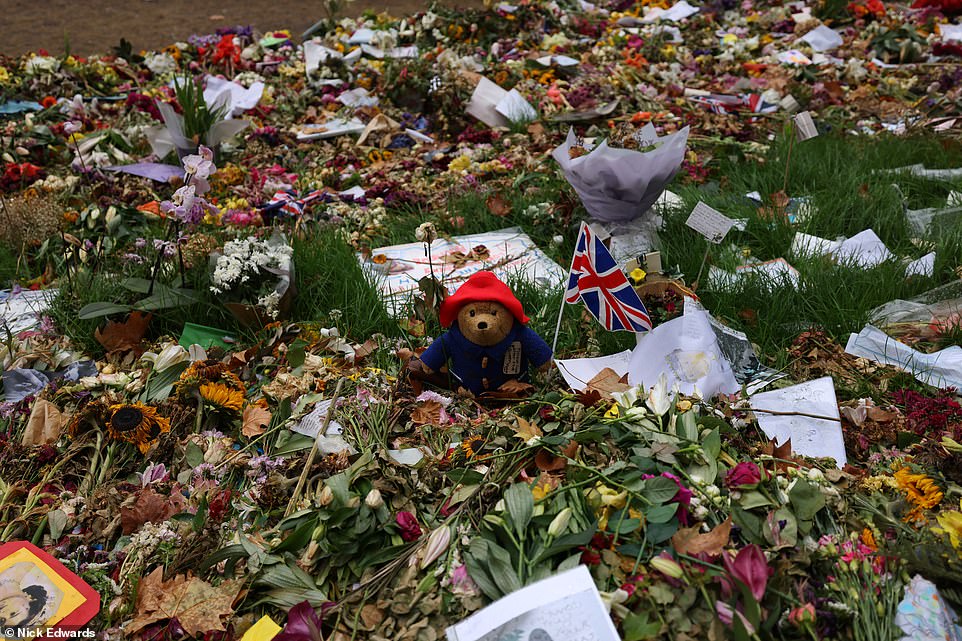 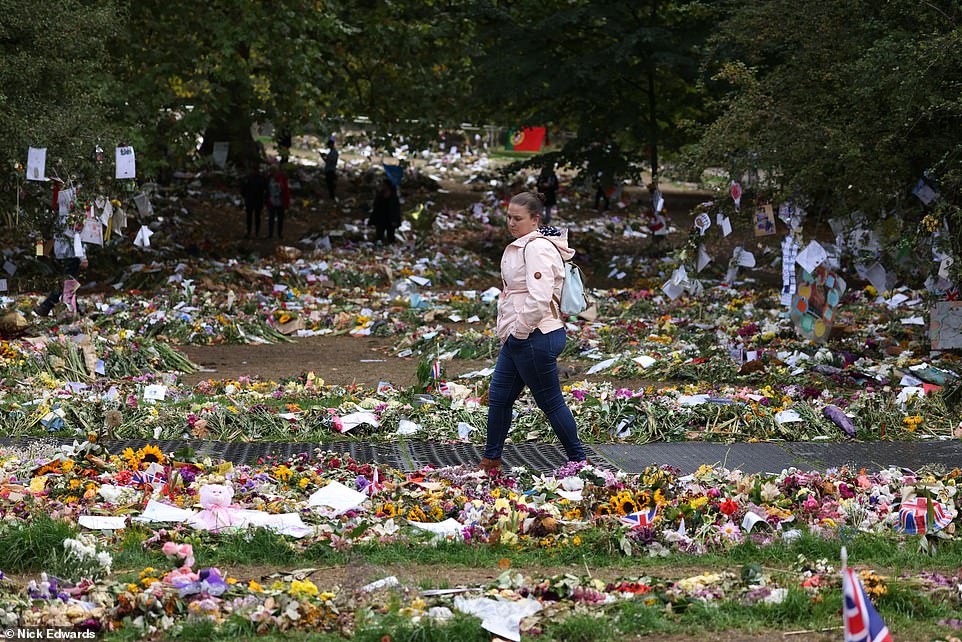 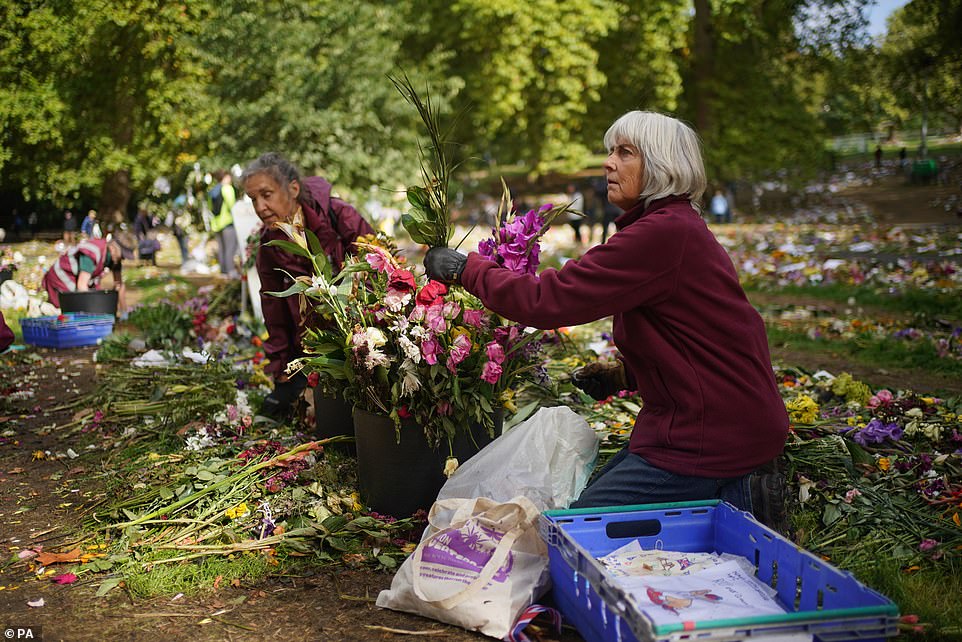 ‘We felt that it was appropriate to continue the story of the tributes by creating compost at our green-waste facility here in Kensington Gardens, to support new shoots of life and colourful displays of flowers in spring.

‘The mulch generated from the organic material will enrich the soil of the Royal Parks over the coming years. The flowers will provide pleasure to the millions of visitors to the Royal Parks in the future, and will enhance these incredible green spaces within London by providing a valuable habitat for invertebrates including bees and butterflies.’

Paddington became an unlikely symbol of grief in the aftermath of Her Majesty’s death this month.

Hundreds of the furry blue duffle coat-sporting figures were laid in honour of the Queen at sites including Green Park and Hyde Park. 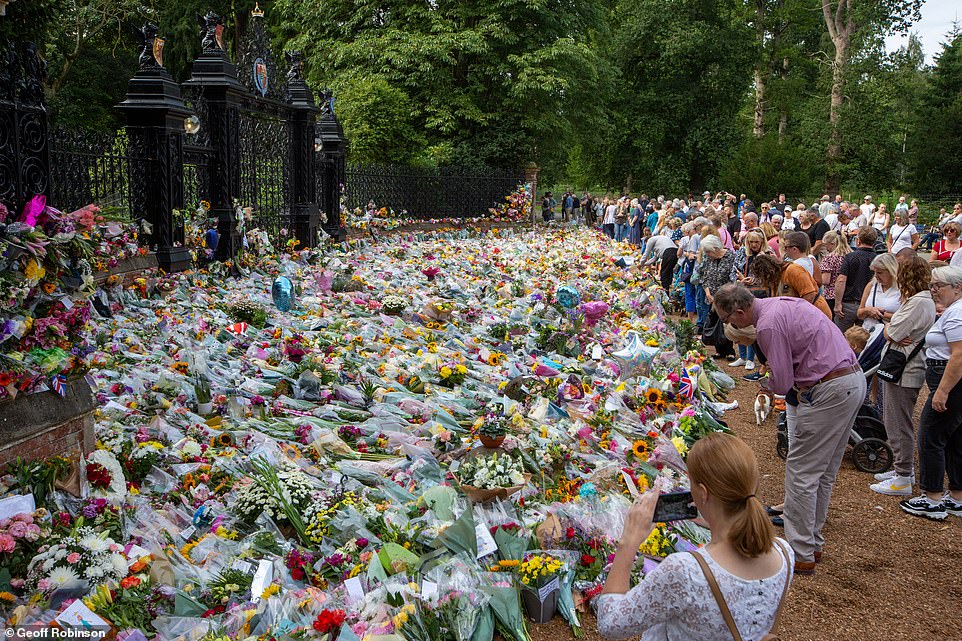 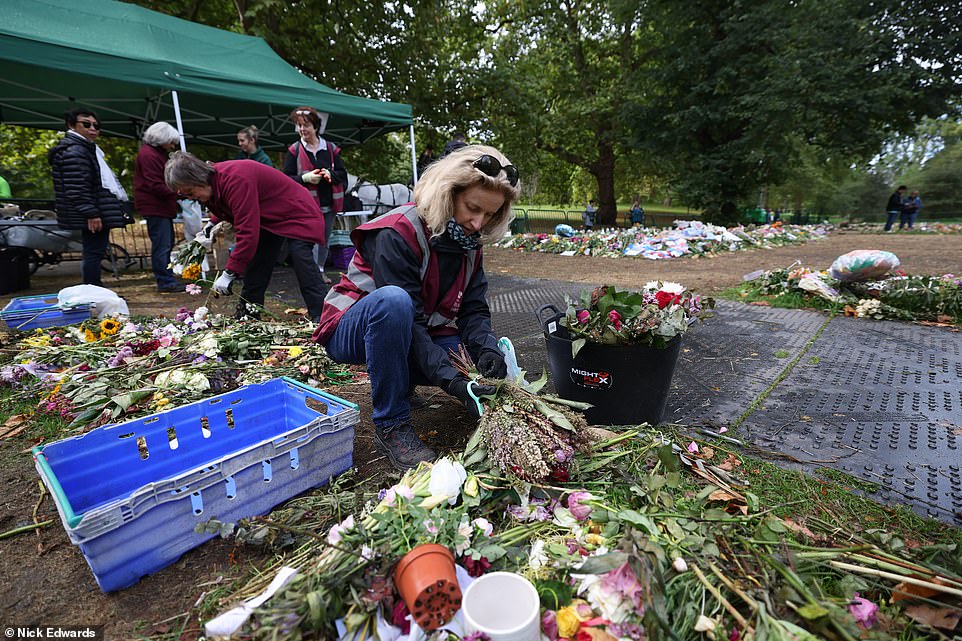 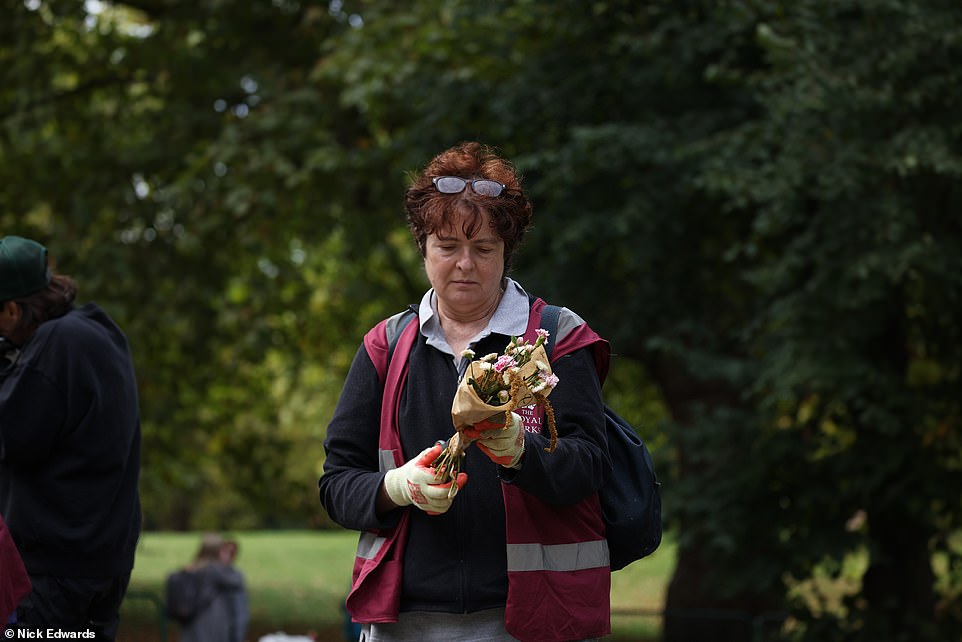 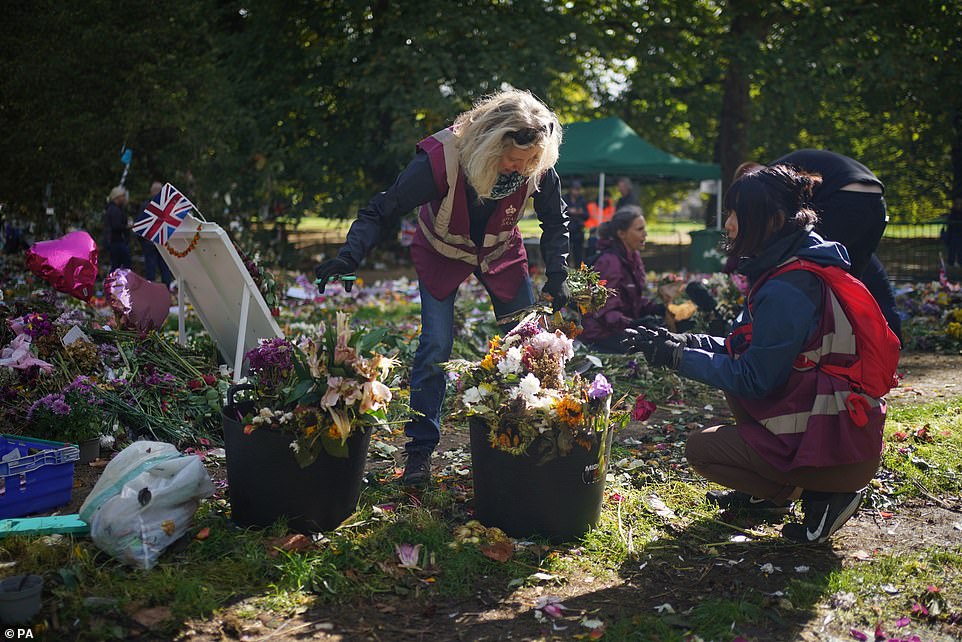 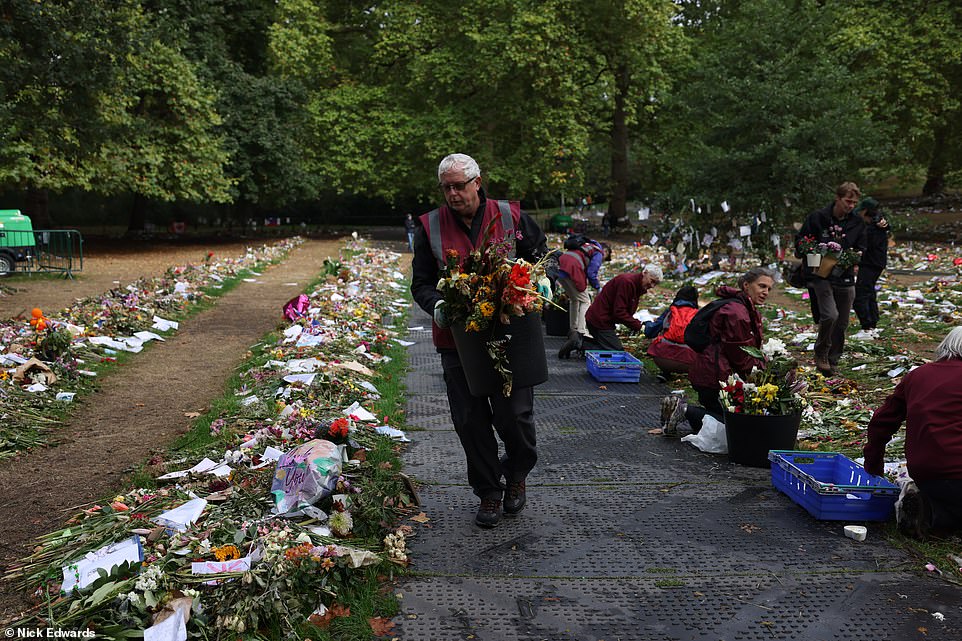 Shire Horses, Heath and Nobby, will transport the floral tributes from Green Park to Kensington Gardens to be composted

There were so many of them, organisers requested that only floral tributes be left – effectively banning the bears.

But the polite ask fell on deaf ears and the Paddingtons kept coming, with many clearly visible and on location this morning.

Organisers have a difficult decision to make as they are of obvious sentimental value, but after at least a week in the elements seem unlikely to be in a condition to be given away.

Children across the nation paid their respects with the teddy bears and sandwiches in a nod to the delightful sketch filmed for the Queen’s Platinum Jubilee in June. 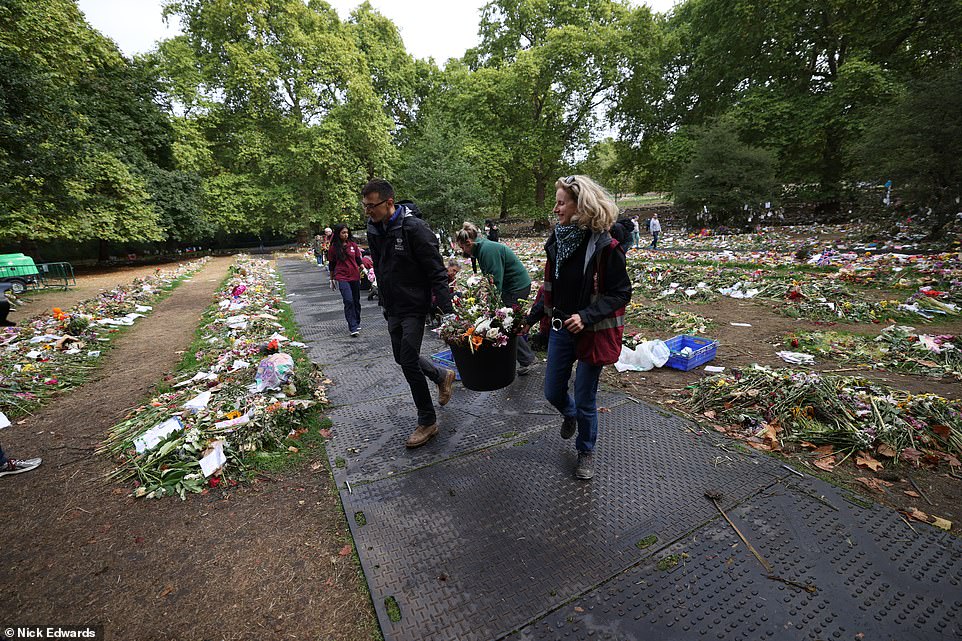 Tributes will be processed to be used as compost across The Royal Parks to support next spring’s bedding, organisers say 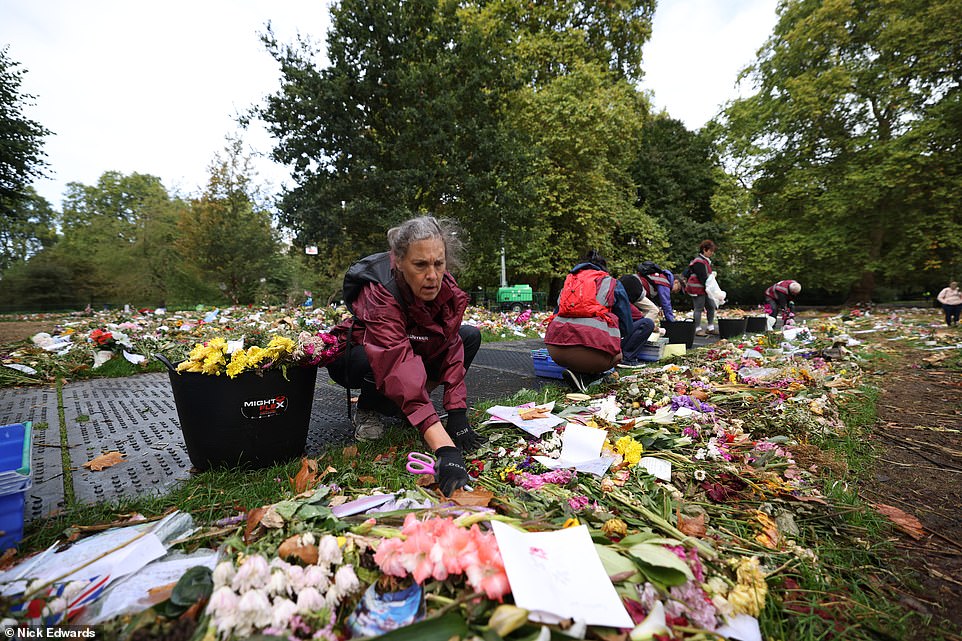 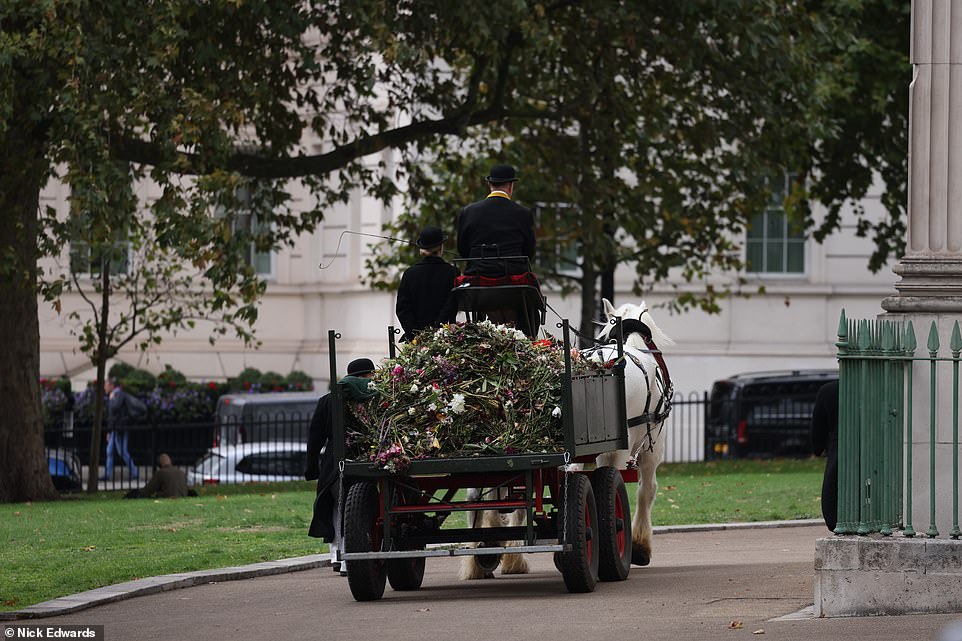 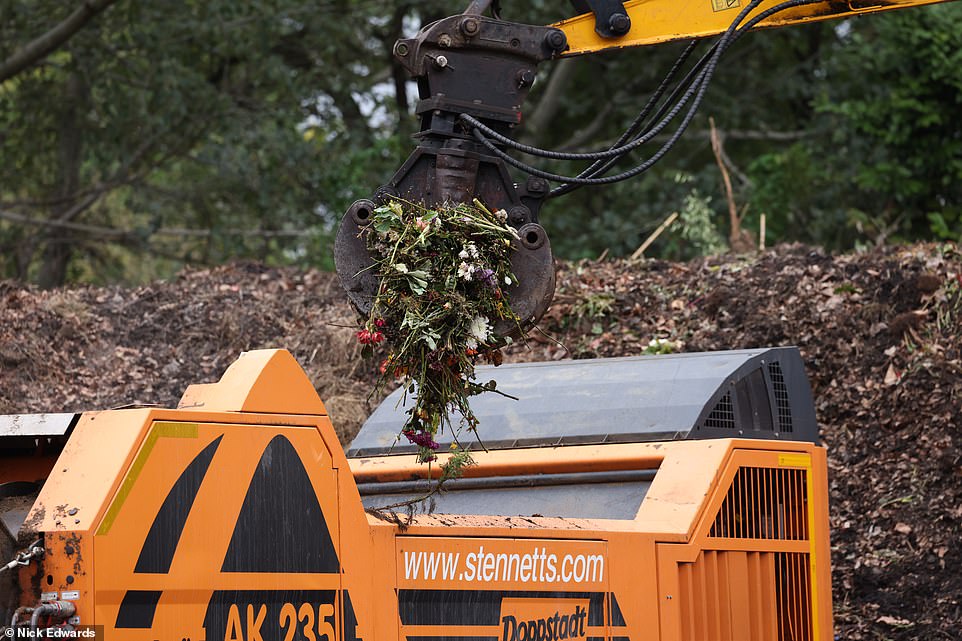 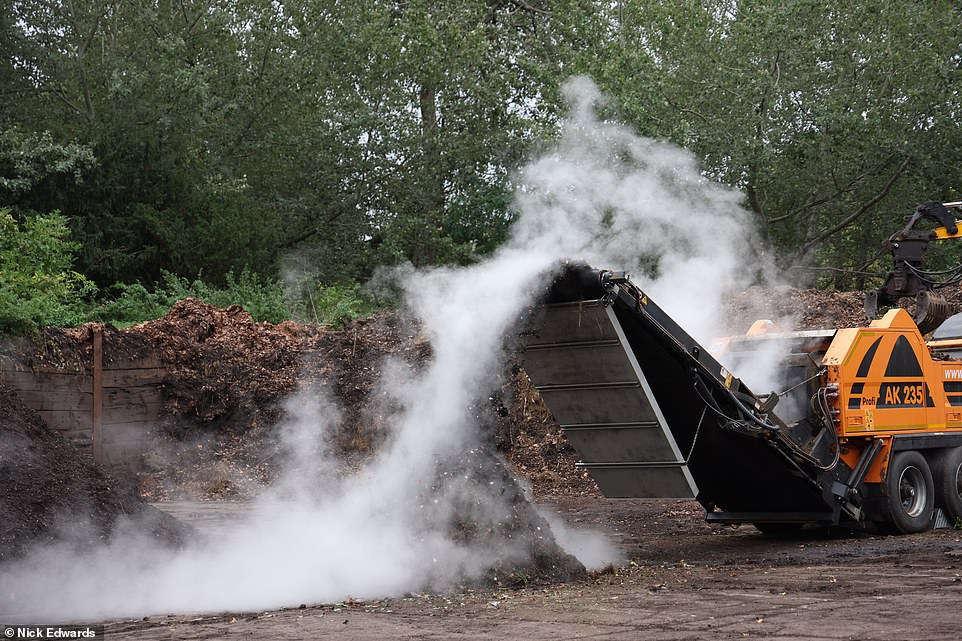 Michael Bond’s beloved bear appeared in a comic sketch with the Queen to celebrate her Platinum Jubilee in June.

The two-minute video sees Paddington and the Queen taking tea in Buckingham Palace as the Jubilee celebrations begin.

Paddington Bear hilariously defies royal etiquette by drinking straight out of the teapot, crushing a cake and pulling a marmalade sandwich out of his hat.

Queen Elizabeth took the opportunity to showcase her sense of humour by bringing a sandwich out of her bag that she keeps ‘for later’.