‘If a n***a want smoke I’m at my crib in 5 mins’: Florida rapper Rollie Bands dares his haters on Instagram to confront him and is SHOT DEAD outside his Tampa apartment five minutes later

By Andrea Cavallier For Dailymail.Com

A Florida rapper was gunned down outside his Tampa apartment five minutes after he shared a post on Instagram daring his critics to confront him.

Rollie Bands was shot in the parking lot of the IQ Apartments on Bruce B Downs Boulevard in Tampa on Friday afternoon. He was rushed to the hospital, but later died from his injuries.

The shooting happened around 3:30 p.m. – just minutes after Bands reportedly posted on social media with a challenge for his rivals to come confront him.

‘A lot of these n****s know where I live at fr,’ the rapper posted to his Instagram story, according to HipHopDX. ‘I sleep in peace. If a n***a want smoke I’m at my crib in 5 mins.’

After taunting his rivals, the rapper then provided his location. Five minutes later, he was gunned down in the exact location he said he would be.

Tampa rapper Rollie Bands was shot and killed only a few minutes after taunting his critics on social media, daring them to come confront them – and then provided his exact location 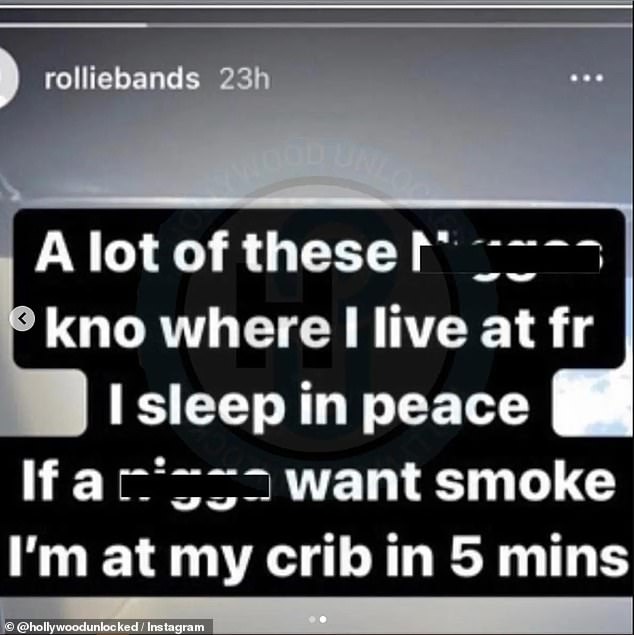 Bands posted to his Instagram story minutes before his death, according to screenshots

Hillsborough County Sheriff’s Office deputies said that they received a report of a man being shot in the apartment complex’s parking lot.

When they arrived, Bands was on the ground with a gunshot wound. The suspects, who fled the scene in an unknown direction, remain at large.

Bands, who was born and raised in Tampa, Florida, is well known for his songs ‘Struggle,’ ‘Reminiscin,’ and ‘Close Ties.’

‘At this time, the shooting does not appear random, as the suspects and victim are possibly known to each other,’ the Hillsborough County Sheriff’s Office said in the report. 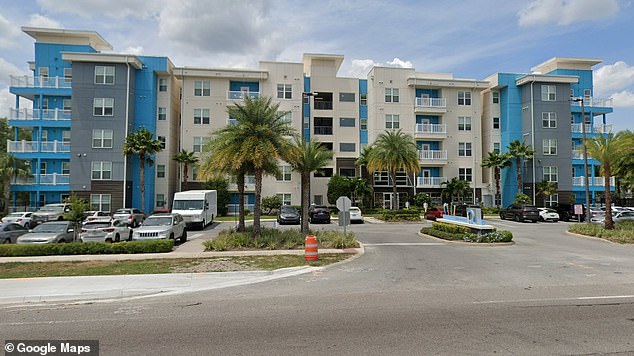 The shooting happened in the parking lot of the IQ Apartments on Bruce B Downs Boulevard in Tampa at 3:30 p.m. on Friday afternoon 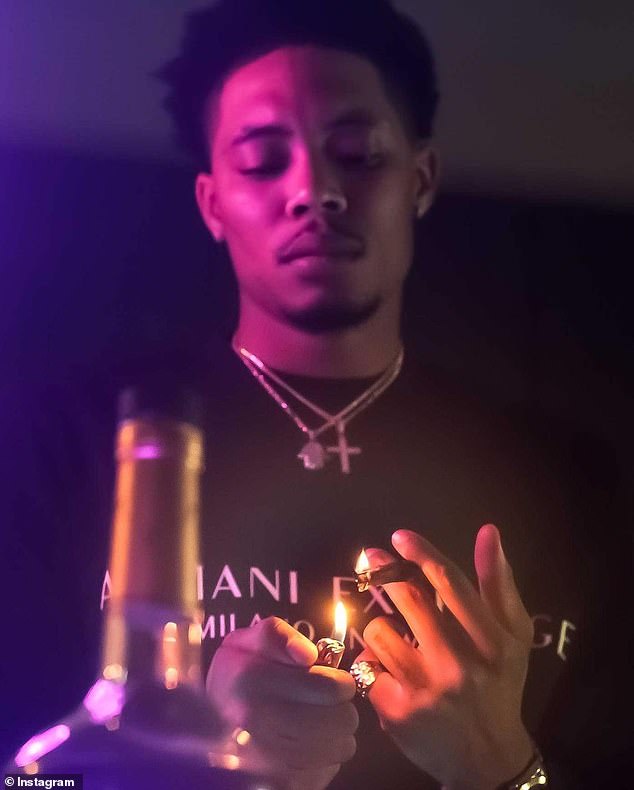 Bands, who was born and raised in Tampa, Florida, is well known for his songs ‘Struggle,’ ‘Reminiscin,’ and ‘Close Ties’

Bands appears to have been survived by a young daughter, sharing a photo of the child to his Instagram profile with the caption: ‘The only person I live for.’

Both supporters and rivals of the rapper have flooded his social media accounts with comments of his death.

‘Rest in paradise to Rollie Bands,’ one person wrote. ‘So sad and senseless. He should still be alive.’

‘Ever since I met u, u was always polite and respectful I’m happy my kids got to share memories with u my condolences to your family and to your daughter,’ one user posted.

Another one wrote: ‘RIP to a beautiful soul.’

But some users mocked the rapper and criticized his actions that are believed to have resulted in his death.

‘A real role model to kids on how not to throw your life away because you are trying to appear cool on social media,’ one user wrote.

Social media has led to numerous murders over the years, including the killing of Pop Smoke after he accidentally revealed his address online.

The rapper, whose real name is Bashar Barakah Jackson, 20, was killed by intruders in a home invasion at a Hollywood Hills house in February 2020.

Hours before the shooting, Pop Smoke had shared a video on social media which revealed the exact address of the home.

Anyone with information about the shooting is asked to contact the Hillsborough County Sheriff’s Office at (813) 247-8200 or make an anonymous tip by calling Crime Stoppers of Tampa Bay at 1-800-873-8477.