Florida announced on Wednesday it has eradicated the African giant land snail – an invasive species that can destroy homes and infect people with meningitis – for the second time.

Florida’s Agriculture Commissioner Nikki Fried made the declaration at a news conference at Miami’s Douglas Park, where the eight-inch snail was first discovered in 2011.

Since then, the state has collected over 168,000 of the Giant African snails (Lissachatina fulica or GAS), due in part to dogs that are able to sniff them out.

In addition to Miami-Dade County, hundreds of the snails were found in Florida’s Broward County, notably western Davie, in 2014, according to the Sun Sentinel.

Florida announced on Wednesday it has eradicated the African giant land snail. Since 2011, the state has collected over 168,000 of the eight-inch long snails 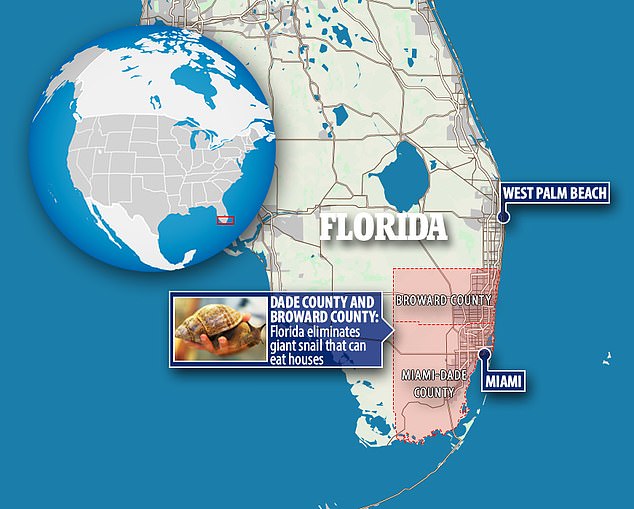 The snails were first spotted in Florida’s Miami-Dade County in 2011 and in 2014, hundreds of the snails were found in Broward County, notably western Davie

According to the state’s Department of Agriculture, this snail is ‘one of the most damaging’ in the world, eating at least 500 different types of plants.

They do ‘extensive’ damage to tropical and subtropical environments, making the snails of grave concern for Florida.

‘It’ll eat your plants, and it’ll eat your house,’ Trevor Smith, director of the division of plant industry and a Florida State Plant Regulatory official said at the news conference, according to the Sentinel.

‘Our trade partners do not want this pest,’ Smith added.

‘So it was absolutely imperative that we come in and eradicate this thing so it didn’t impact our international trade.’

Not only are the giant land snails considered a threat to the environment, feeding on peanuts, beans and even paint and stucco on houses, they are a dangerous threat to humans, causing meningitis due to the fact they carry a parasitic nematode. 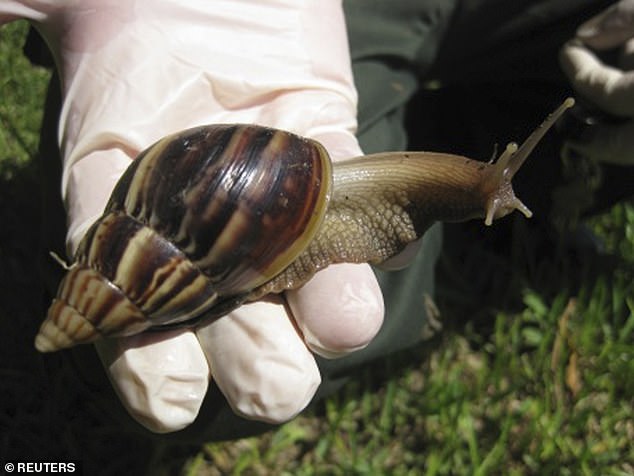 This time around, the snails were discovered in Miami-Dade County in 2011 and then in Broward County in 2014. They were first spotted in southern Florida in the 1960s and it took the state nearly 10 years and $1 million to get rid of them

Parasitic meningitis is less common than viral or bacterial meningitis, but it can impact the brain and nervous systems, resulting in headaches, stiff necks, vomiting and sometimes, death, according to the Centers for Disease Control and Prevention.

According to the U.S. Department of Agriculture, land snails were first spotted in southern Florida in the 1960s and it took nearly 10 years and $1 million to rid the area of them.

These snails reproduce quickly, producing about 1,200 eggs in a year.

‘Each snail contains both female and male reproductive organs,’ the USDA said.

‘After a single mating, each snail can produce 100 to 500 eggs. These snails can reproduce several more times without mating again. They can generate clutches of eggs every 2 to 3 months.’ 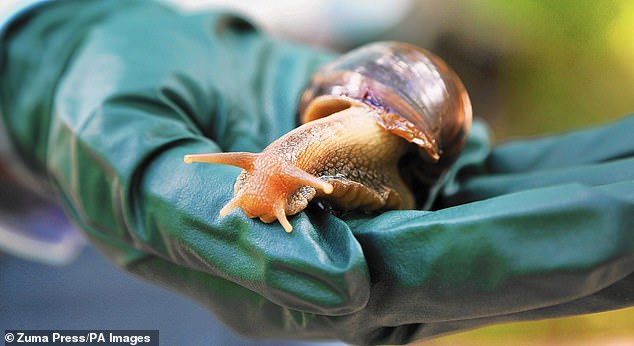 The snails can reach almost 8 inches in length and 5 inches in diameter. They carry a parasitic nematode that can cause bacterial meningitis in humans

They are hard to eradicate not only because of the high reproduction rate, but they have no natural predators.

Each snail can live up to nine years and grow to be eight inches in length, roughly the size of an adult’s hand from tip of the finger to the crease under the palm.

It’s unclear how the snails were brought back to Florida in 2011, Smith said at the conference, though a colony was first discovered near a house in western Davie in 2014.

For a species to be eradicated, it has to be at least three years since a live one is found and the last live GAS was reported in 2017.

‘I’m happy to say there’s still only one place on earth where the Giant African land snail has been eradicated,’ Smith said, before adding, ‘and now we’ve done it twice.’

In July, 15 of these giant land snails were captured at Houston’s George Bush Intercontinental Airport after they were seized from the luggage of a Nigerian woman.

In 2013, a woman spotted this type of snail in the backyard of her Houston-area home, according to Click2Houston.