The Florida sheriff who arrested an elementary school student for allegedly threatening a mass shooting defended publicly exposing the minor by saying ‘a child pulling a trigger equals the same aftermath.’

Daniel Issac Marquez, 10, was arrested Saturday and charged with making a written threat to conduct a mass shooting after sending a text about Patriot Elementary School in Cape Coral.

The boy’s alleged text read: ‘I scammed my friend’ and included a Google image of money, according to his arrest report.

‘I bought this,’ he added a few seconds later, a included an image of four assault rifles.

Marquez then stated: ‘Get ready for water day,’ referencing a recent school-sponsored event in which students participate in water activities, like playing in sprinklers.

‘He described wads of cash and ‘get ready’ to commit a mass shooting,’ Lee County Sheriff Carmine Marceno said of the text during a W radio interview Monday, adding: ‘We don’t wait one second. We investigate every threat as if it’s real.’

‘I did a campaign. Fake threat, real consequence. While I understand the boy is 10 years old. His brain’s not fully developed, he’s a juvenile, I have to tell you. When a 10-year-old presses a trigger, the aftermath is the same regardless of the age,’ the sheriff explained.

He also warned anyone who attempts a school shooting: ‘You don’t get to come into one of my schools in my county and present deadly force. Because we meet deadly force with delay force, without one second, without hesitation.

‘If you think you’re going to come and kill a child or a faculty member, think again. We will kill you immediately.’

The fake threat was the second time in a week the community was rocked by the threat of violence against a school. A woman on Thursday said she would go to a high school graduation in the area with a bomb strapped to her chest.

But they both come after 19 children and two teachers were shot to death by a sick 18-year-old gunman in Uvalde, Texas. Salvador Ramos blasted his grandmother in the face before going on a rampage at Robb Elementary School last Tuesday. 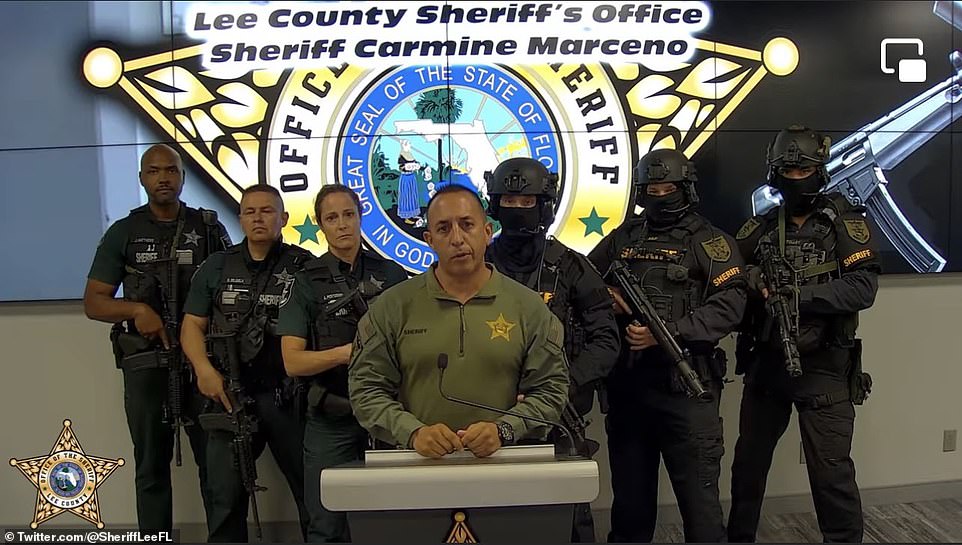 Lee County Sheriff Carmine Marceno defended his public arrest of Daniel Issac Marquez, 10, by saying if the boy had actually fired shots at his school the result would have been the same 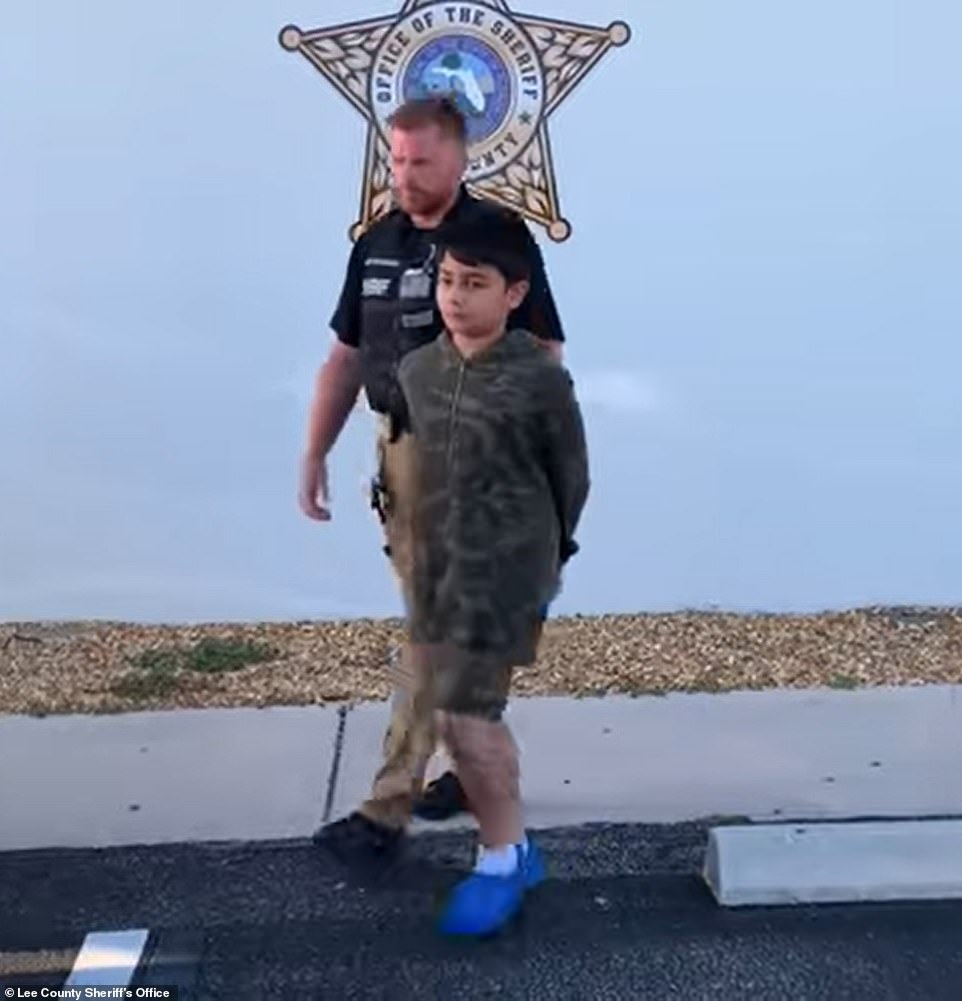 Daniel Marquez, shown here be walked out of a Lee County Sheriff’s office, was described as ‘sickening’ the sheriff 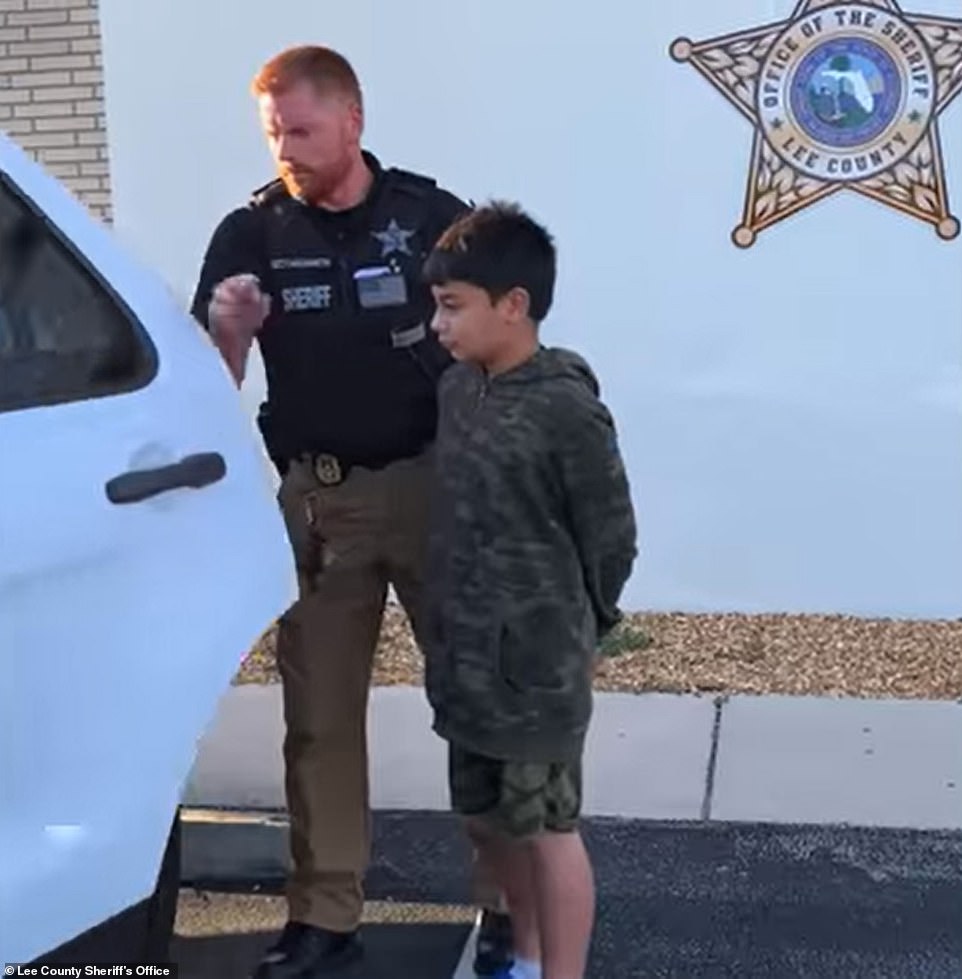 The sheriff said: ‘My team didn’t hesitate one second…NOT ONE SECOND, to investigate this threat’ 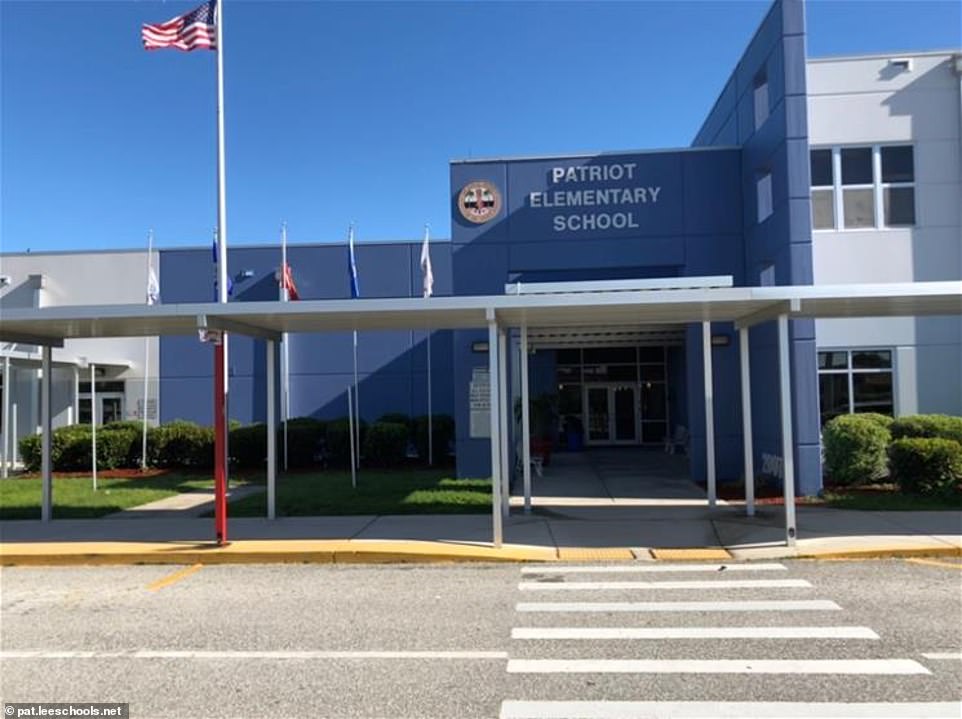 During Monday’s interview, Marceno also shared that he also holds the fifth-grader’s parents accountable for the threat, as he would with the parents of any child who threatens a massacre.

‘We hold the parents accountable,’ the sheriff argued. ‘When your son or daughter are online don’t just leave them in a room online. We’ve seen juveniles researching on Columbine and how to commit a mass shooting and buy guns on the black market.’

The sheriff’s office confirmed to DailyMail.com that as of Monday, no charges have been filed against Marquez’s parents, as there ‘are no applicable ones for them.’

Authorities also confirmed the 10-year-old has no prior criminal history. It is unclear if he had a history of mental illness.

Cops posted video of his Marquez’s arrest on Facebook and publicly slammed the boy for acting ‘like a little delinquent’ and said he was now ‘experiencing real consequences’.

Sheriff Carmine Marceno laid into Marquez for his ‘sickening’ text message after he was arrested on Saturday. He said: ‘This student’s behavior is sickening, especially after the recent tragedy in Uvalde, Texas.

‘Making sure our children are safe is paramount. We will have law and order in our schools! My team didn’t hesitate one second…NOT ONE SECOND, to investigate this threat.’

He later added: ‘Real consequences. Lee County will have law and order.’

The shocking incident is being investigated by the The School Threat Enforcement Team and the Youth Services Criminal Investigations Division.

The sheriff continued: ‘Right now is not the time to act like a little delinquent. It’s not funny. This child made a fake threat, and now he’s experiencing real consequences.’ 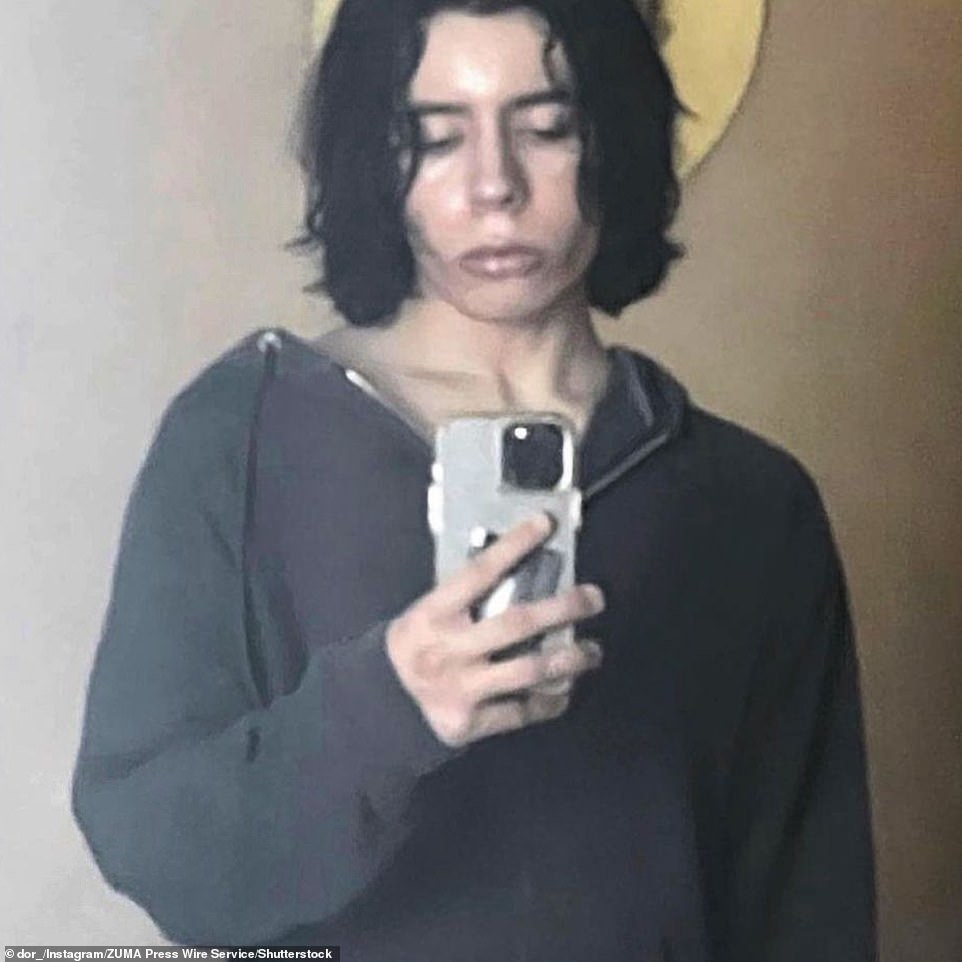 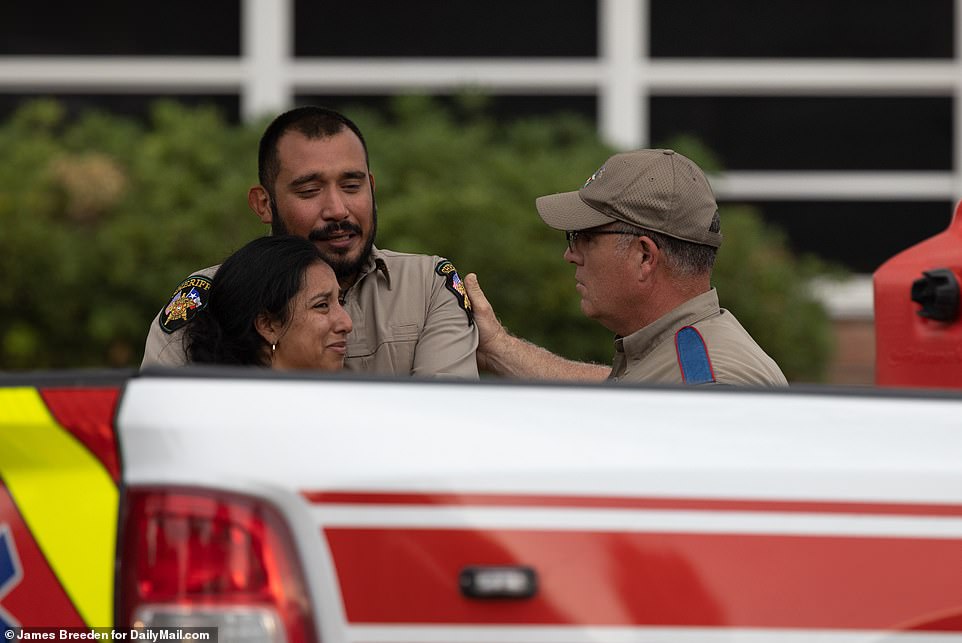 This image of sheriff’s deputy Felix Ramos clutching his wife Kimberly as they found out that their daughter, Lexi, 10, was among the victims was beamed across the world 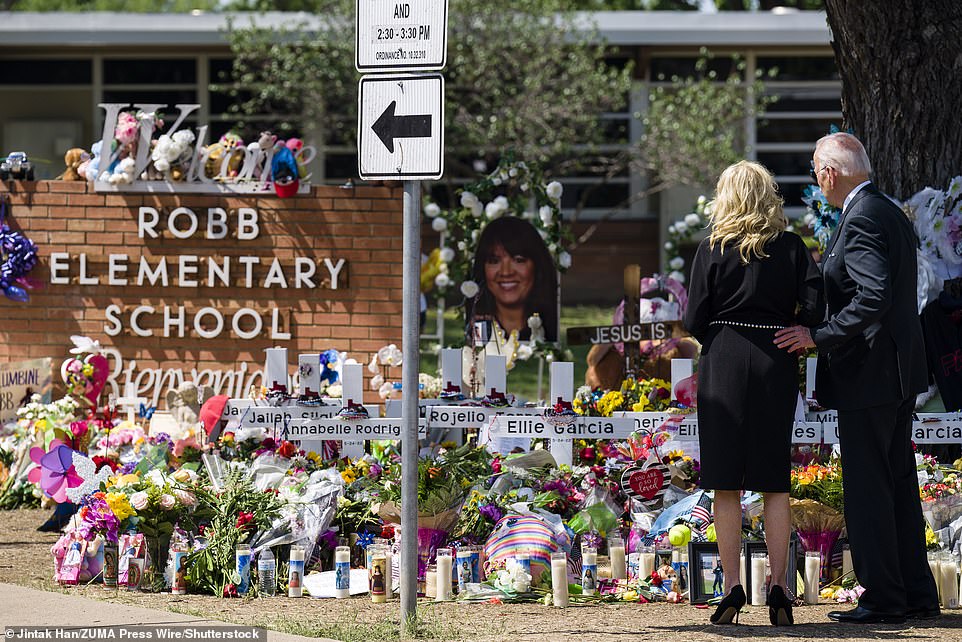 Two days after the attack on Robb Elementary School, Sheriff Marceno was forthright in his reaction telling the media: ‘You don’t get to shoot our children. You bring deadly force in this country, we are going to kill you.’

The sheriff thanked Florida Governor Ron DeSantis for giving law enforcement in the state ‘the tools’ to keep children safe and to preserve law and order.

Amd on May 27, Sheriff Marceno appeared in an eight-minute long video in which he criticized federal aid for Ukraine.

The sheriff said that the money should be spent on ‘target hardening’ our schools.

In front of six sheriff’s deputies, all armed with assault rifles and clad in tactical gear, Marceno said that the residents of Lee County should rest assure that their children were safe in schools in the area.

Marceno was named as sheriff of Lee County first in 2018 by then-Governor Rick Scott following the resignation of previous Sheriff Mike Scott. 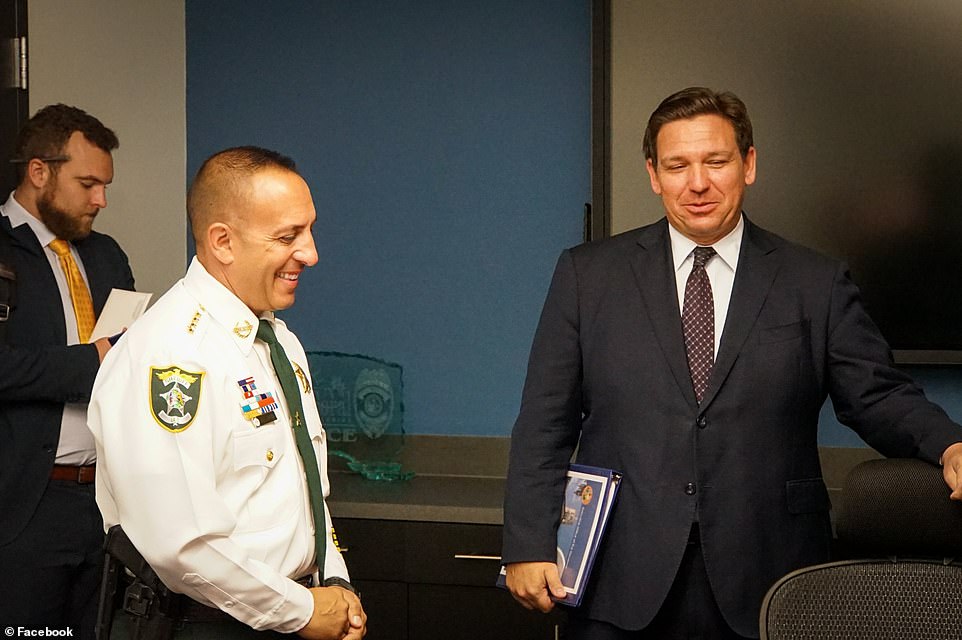 The Florida Department of Law Enforcement said in 2020 that Lee County’s crime rate dropped by 18.4 per cent during his initial tenure between 2018 and 2020.

That’s despite the county’s growing population. Cape Coral became one of the most popular destinations among people leaving cities amid the Covid-19 pandemic.

This is the second time in a week that the community of Cape Coral was rocked with a threat of violence against a school.

On May 26, a woman named Tracy Carter threatened to attend a high school graduation in the area with a fake bomb strapped to her chest.

According to the Cape Coral Police Department, Carter was upset that her child was unable to graduate or attend prom due to disciplinary issues.

Carter said that she would ‘feel bad for the children she would scare but she really needed to be heard. She stated that she didn’t plan to hurt anyone.’ 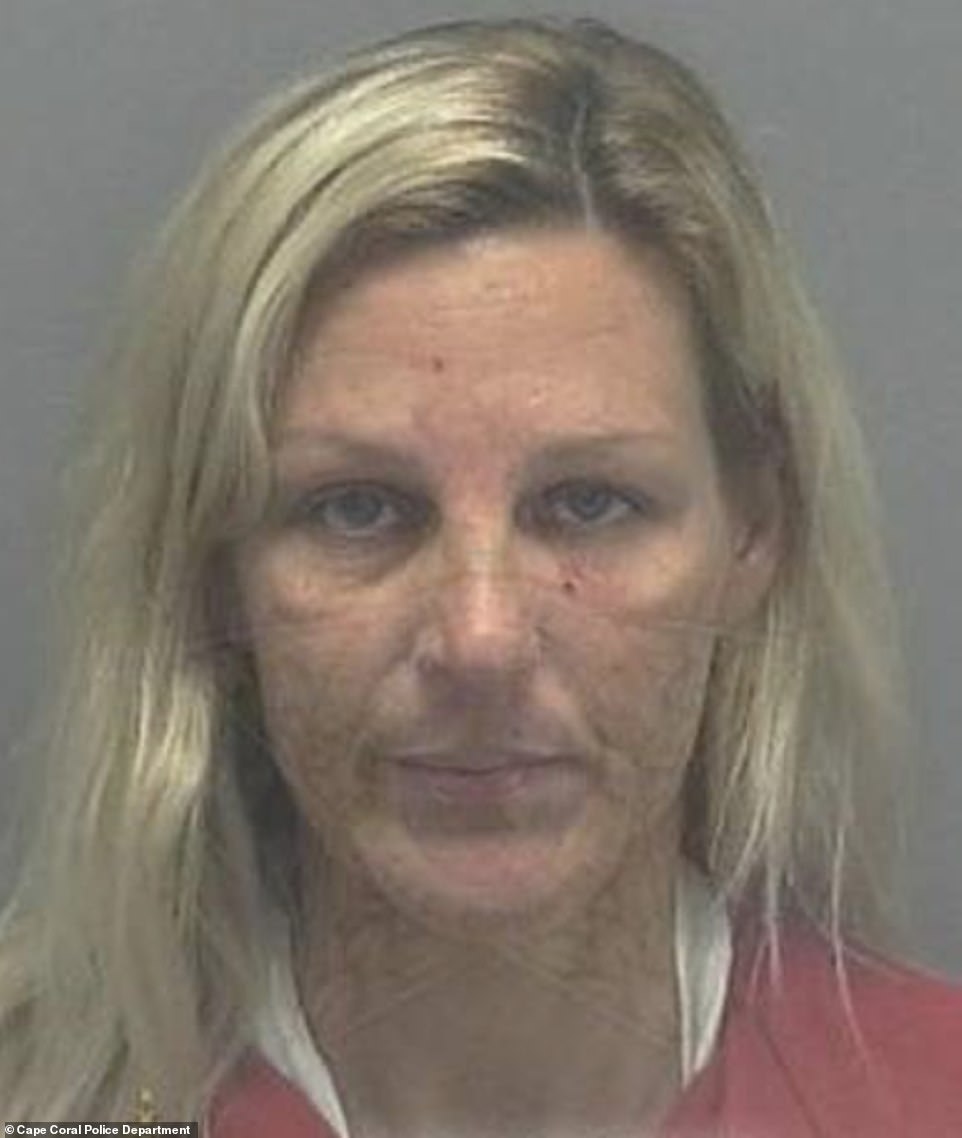 Cape Coral woman Stacy Carter is accused of threatening to scare attendees at a high school graduation with a fake bomb just two days after the events in Uvalde, Texas

The woman added that she wanted to mimic the Denzel Washington movie ‘John Q,’ about a father who holds a hospital emergency room hostage in order to secure a life-saving operation for his child.

The arrest of 10-year-old Daniel Marquez came just after the Department of Justice announced a critical review of the law enforcement response to the initial 911 calls regarding the shooting in Uvalde.

DOJ spokesperson Anthony Coley said in a press release: ‘The goal of the review is to provide an independent account of law enforcement actions and responses that day.’

The review comes after it was revealed that Ramos’ rampage in Uvalde carried on for 77 minutes before he was engaged by a border patrol agent.

Parents of the students at Robb Elementary School showed up at the school after hearing about the reports of a shooting while the massacre was continuing inside.