Major towns across Victoria are fighting to save their homes against floodwaters not seen in the state for more than a decade.

Residents across Victoria’s north west have been smashed by rain overnight, with Kilmore residents reportedly fighting their way through raw sewage that supposedly spewed onto flooded streets.

State Emergency Service workers in the Loddon Malley region have fielded more than 200 calls for help, with the worst yet to come. 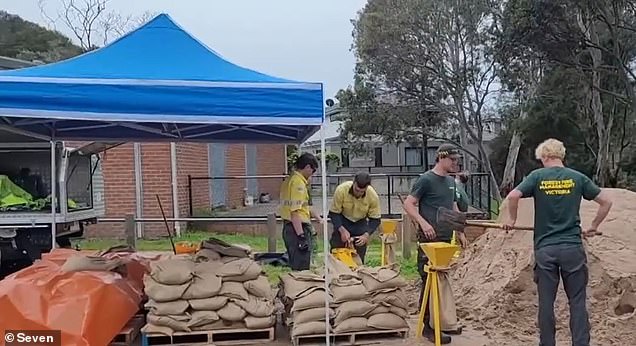 Residents in Rochester, Victoria, have been working tirelessly to fill sandbags as they brace for floods 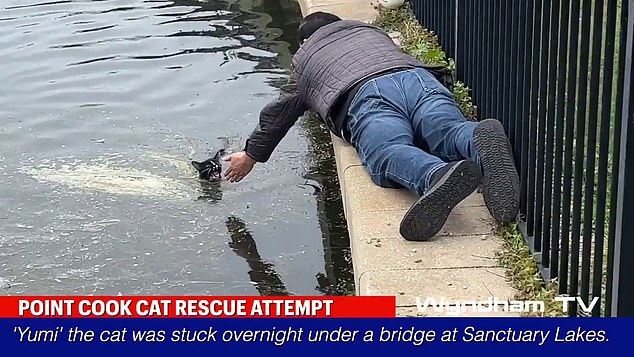 ‘What’s happened is we’ve had a surge of stormwater into our sewer system. We had a report this morning from the public saying that there was raw sewage coming out of some man holes in an area in Kilmore,’ he told 3AW’s Neil Mitchell just before midday.

‘We’ve inspected it and we’ve got stormwater pumping out … the inspection on site is showing that at that site that was reported it is stormwater coming out.’

Mr Nash assured the Kilmore community there was no health issues related to the discharge.

‘It is just stormwater pumping out,’ he said.

Desperate home owners have called into live radio as water threatened to spill into their homes.

In Melbourne, waters continue to rise, with parklands across the metropolitan area being turned into rivers.

City workers have been asked to stay home, with some primary schools reporting flood waters at their gates.

Students at St Kevin’s College have switched to remote learning amid fears the Yarra River, which flows through the heart of Melbourne’s CBD, will flood.

The school’s Heyington campus, alongside the Yarra in Toorak, has previously experienced flooding in 2005 and 2009.

Reports have emerged that The Alfred Hospital has been hit by flood waters, which have gushed into the hospital’s basement. 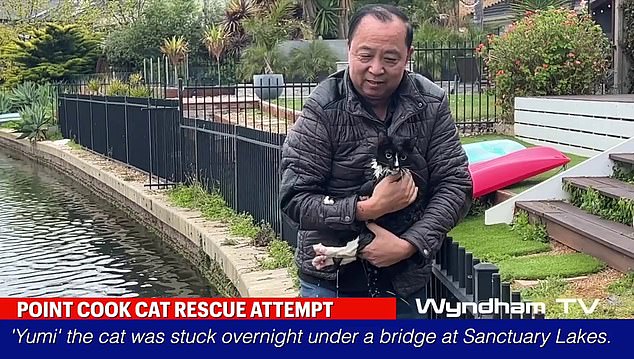 Victoria’s emergency management commissioner Andrew Crisp has warned the state’s flood risk won’t end after today, or even after this weekend.

Emergency management commissioner Andrew Crisp told 3AW’s Neil Mitchell  ‘we’re in this for a while’, with the state experiencing a ‘campaign flood event’.

‘There is another low developing, so we’ll see, probably, that weather next Wednesday/Thursday,’ he told Mitchell.

‘The bureau are saying we’ll continue to see this cycle over the next six to eight weeks.’

West of Melbourne, in Point Cook, emergency workers jumped into a kayak to try and rescue a cat that had become stranded under a bridge.

Dramatic footage captured by local news service Wyndham TV showed ‘Yumi’ the cat swimming for its life after it was eventually swept free by the flood waters.

It’s owner managed to pull the cat to safety as it was swept down the floodwaters. 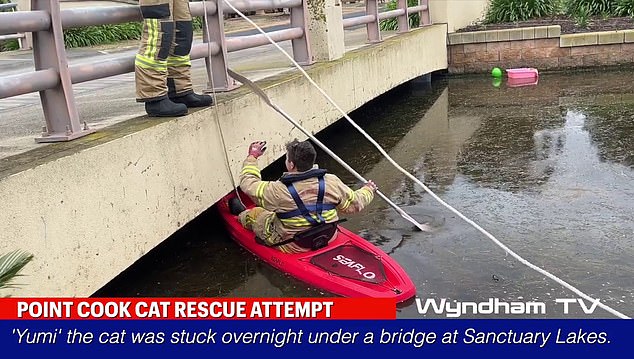 Roads across Melbourne’s outer suburbs in the north have been swamped, causing chaos in those areas.

Major highways, including the Calder and Midland, have been closed with more road closures expected over the coming days.

Satellite images capture a massive cloud band extending 5,000 kilometres from the Tropical Indian Ocean to continental Australia – with several states set to be affected, chief among them Victoria and Tasmania, plus southern New South Wales.

Bendigo, which has a population of more than 120,000, has been hammered by rain, recording 65.6mm in a single day compared to about 40mm in Melbourne.

A Bureau of Meteorology spokeswoman on Thursday said some towns in Victoria’s north could expect up to 80mm of rain to fall in a day by the end of Thursday.

In Mildura, in Victoria’s north on the border with New South Wales, house boats have been moved into the middle of the Murray River in the hope they aren’t wrecked by the rising waters. 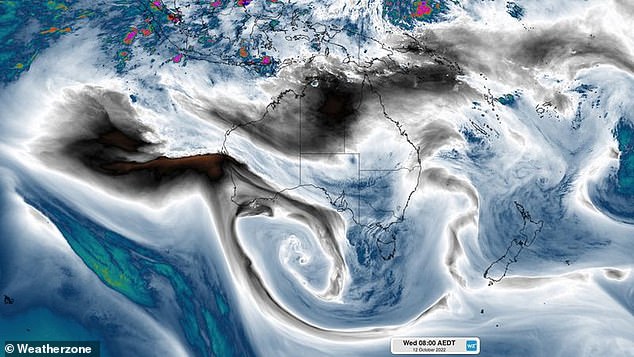 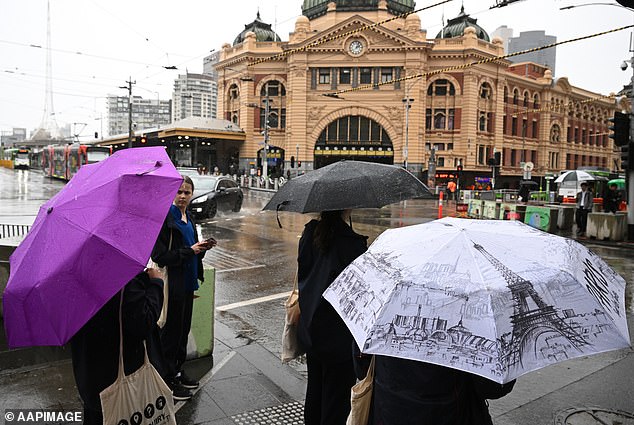 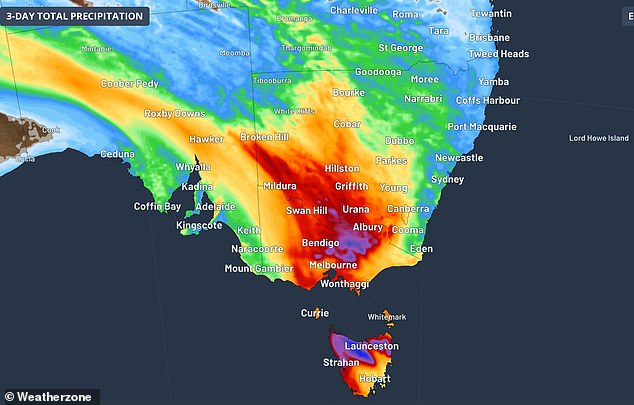 Satellite images have captured a massive cloud band extending 5,000 kilometres from the Tropical Indian Ocean all the way to southeastern Australia

Meanwhile sandbagging is underway in the town of Rochester, in central Victoria, which is forecast to essentially get ‘cut in half’ should the nearby Campapse River overflow. It’s feared as many as 700 homes could be flooded.

On Thursday, the SES warned the peak flood waters in the town were not expected to hit until Saturday.

Locals have been told waters could rise to 115m above sea level.

Mackay Street in the town has reportedly already seen flood waters, with the Campaspe River expected to break its banks.

Residents and businesses of Rochester have been working tirelessly to fill sandbags as the wet weather continues.

The town was devastated by another flooding event in 2011 – the worst on record for the area.

Patients had to be evacuated from the local hospital as the Campaspe river reached record highs. 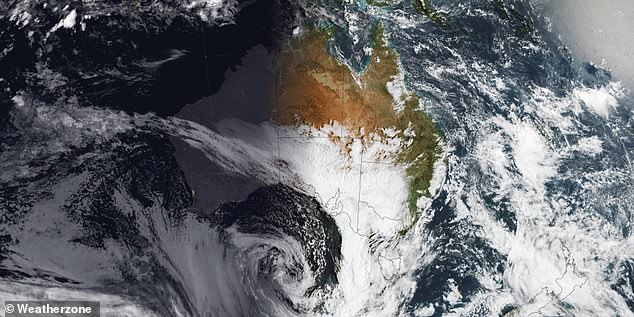 Tasmania will see the highest rainfall in the country from the impending weather system. The State Emergency Service is renewing the call to Tasmanians, particularly those in the north and northwest, to be prepared for intense rainfall, damaging winds, and potential flooding

Forecasters have warned a large band of cloud is being dragged across southeastern Australia, causing huge amounts of tropical moisture to flow over Victoria.

That moisture will fuel a period of heavy rain that will soak Victoria until Friday morning.

Showers have already started to increase over some central and western parts of the state, with Melbourne picking up 8mm by midday on Wednesday.

It is set to get worse over the rest of the day, with wind and rain increasing as a cold front moves over the state’s western districts.

The cold front will spread further east on Thursday with central, northern and northeastern parts of the state hit by bad weather.