Casinos and hotels are semi-underwater as flooding in Las Vegas forces punters to seek shelter from a rare thunderstorm.

The footage came as flashfloods hit downtown Vegas on Thursday night, following warnings from the authorities that the storm was on its way.

Water is shown pouring through the roofs of a casino and soaking the carpet while and people were filmed drenched by the torrential rain. 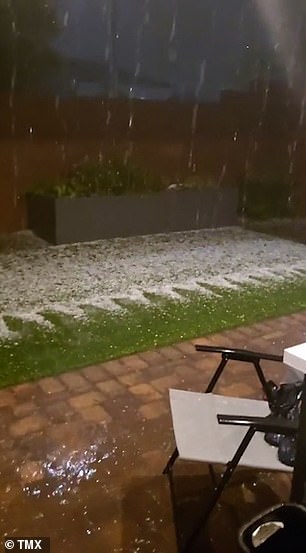 Hotel residents filmed their yards filling up with water as rain battered the doors and windows through the night. The monsoon season in Nevada happens between July and September, although flashfloods in Vegas itself are rare 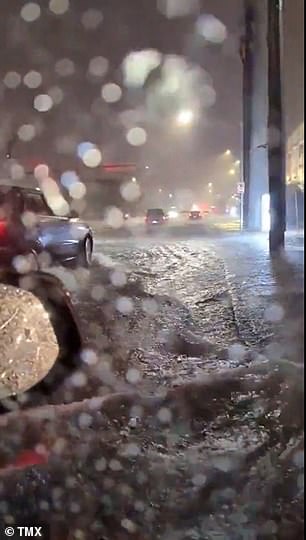 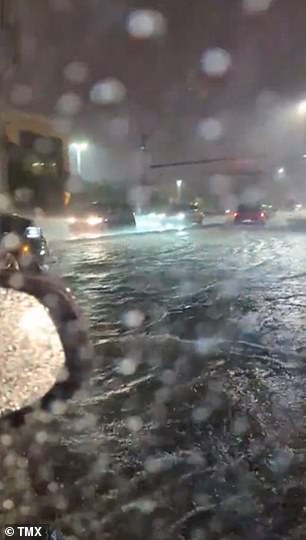 Cars wade through floodwaters near the Strat Hotel in downtown Las Vegas in another video while a woman gasps in shock.

‘Electric surges set the fire alarms of several buildings off, causing fire responders to have to head out into the storm to respond to them,’ Las Vegas resident Alexander Wolf told  The New York Post.

Some vehicles were almost fully submerged in the floods, the footage showed.

There was also flooding inside Planet Hollywood on the Las Vegas Strip, with water coming through the room of the building.

Footage shows a torrent of water cascade through the roof after the storm dislodges one of the panels, according to punters who allegedly filmed the bad weather.

Another panel gives way, prompting shouts from the crowd below. 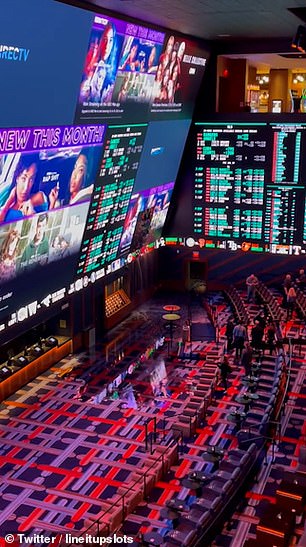 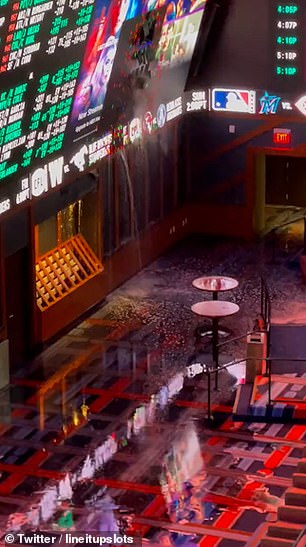 Hotel residents filmed their yards filling up with water as rain battered the doors and windows through the night.

The monsoon season in Nevada happens between July and September, although flashfloods in Vegas itself are rare.

No injuries have yet been reported.

The videos emerged after disastrous flash floods killed at least 15 people in Kentucky on Friday.

The death toll is expected to double, after the catastrophic downpours obliterated entire towns.

The rains submerged houses, cars, and buildings in flood water as emergency services desperately scrambled to save those who are trapped.

Raging thunderstorms have pummeled the area, causing mudslides and years worth of damage in what has been Kentucky’s most devastating flood in history.

It’s feared that waterlocked, saturated ground will continue to swell while rivers and creeks are expected to burst their banks with additional downpours this morning. 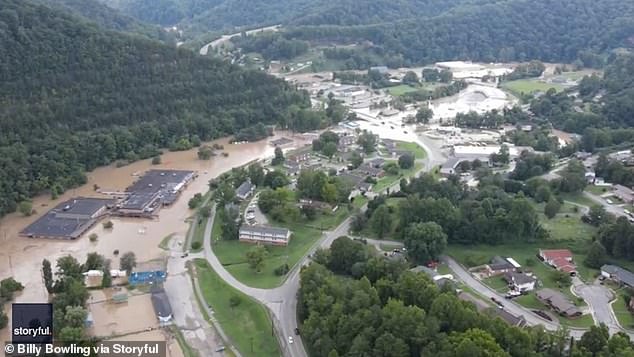 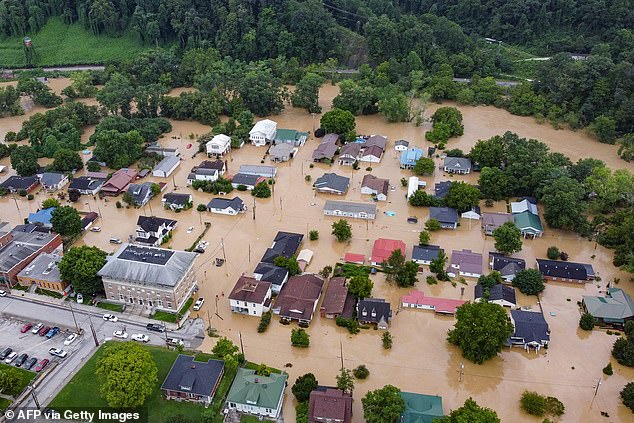 Aerial view of homes submerged under flood waters from the North Fork of the Kentucky River in Jackson, Kentucky, July 28 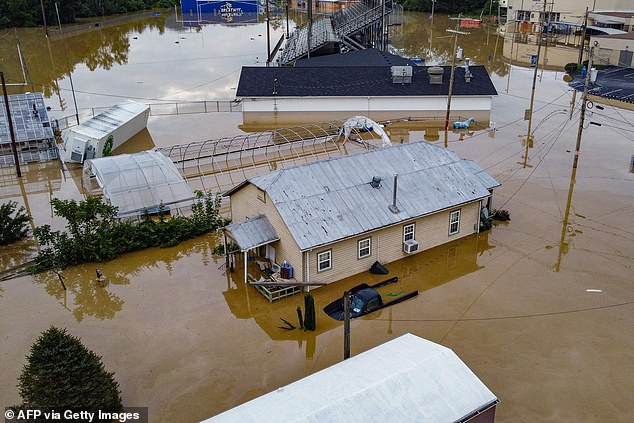 It will take the hundreds of people whose homes have been submerged in the dire flooding years to rebuild and recover from this cataclysmic disaster, Governor of Kentucky Andy Beshear said on Friday.

Devastating images show the catastrophic destruction the flooding has caused, with vehicles floating through streets which now resemble rivers and lakes.

Homes and businesses have been nearly submerged up to their rooves in the unrelenting deadly torrent – as 18 more hours of rainfall is expected on Friday before the deluge eases on the weekend.

Residents have been forced to climb trees and scramble to rooftops to look for safety as many locations in eastern Kentucky exceeded 10 inches of rain in the last 24 hours.

A series of storms drenching the eastern part of the state has dropped water that has yet to crest, leaving damage that could take years to repair, said Beshear. 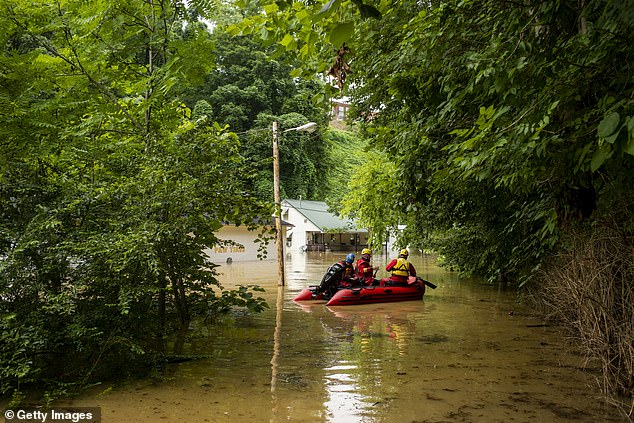 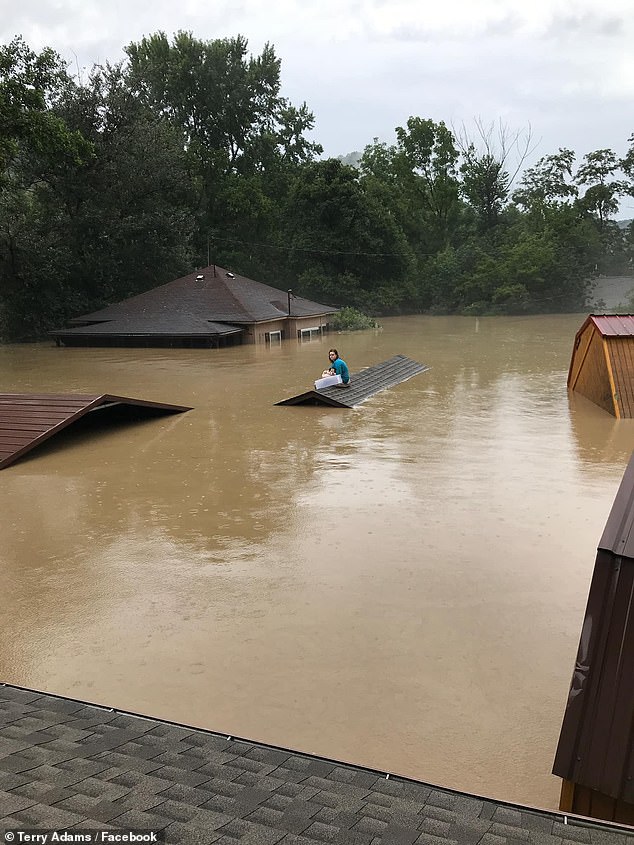 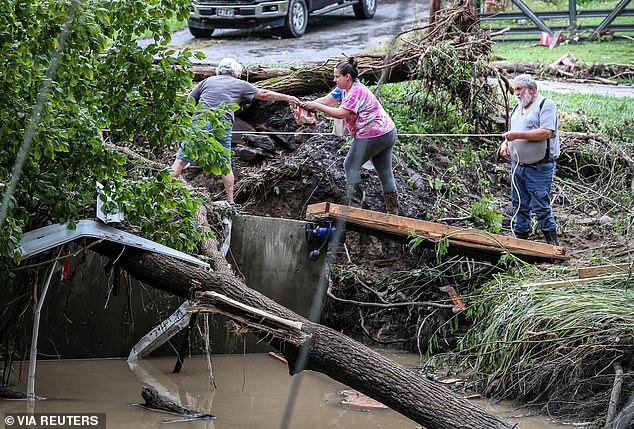 Tonya Smith, whose trailer was washed away by flooding, reaches for food from her mother Ollie Jean Johnson to give to Smith’s father, Paul Johnson, as the trio used a rope to hang on over a swollen Grapevine Creek in Perry County

The Governor declared a state of emergency in six counties on Thursday morning.

Rain water was as high as the leaves of nearby trees and power poles were sticking up from greenish brown water, images from the destruction revealed.

Yesterday, the state activated the National Guard and the state police to use helicopters and boats to rescue people marooned among the floodwaters.

Dramatic drone footage over Hindman, one of the hardest hit cities in eastern Kentucky, shows several homes and buildings almost completely submerged by the flooding, with only their rooftops of some visible.

Breathitt County Emergency Management Director Chris Friley, who is overseeing the damage in one of the hardest hits areas, said on Thursday that the damage over the last day went beyond what previous flooding had done in recent years.

The news comes after six children and 14 adults were rescued from a St Louis daycare center after it was inundated with four foot floodwaters – and electrical sockets began to spark after the water touched them.