Chefs and foodies will want to get their hands on this stunning cliff-top home – as it comes with a popular fine dining restaurant attached to it.

The View, a 50-cover restaurant and five-bedroom home with a roof-top terrace, is named due to its 180-degree panorama of Whitsand Bay in Cornwall.

It is on the market for £1.5m with estate agents Scott Parry Associates who describe it as a ‘world class seaside location’ and the ‘ultimate lifestyle opportunity’.

The View, a 50-cover restaurant and five-bedroom home with a roof-top terrace in Cornwall, has gone on the market for £1.5m 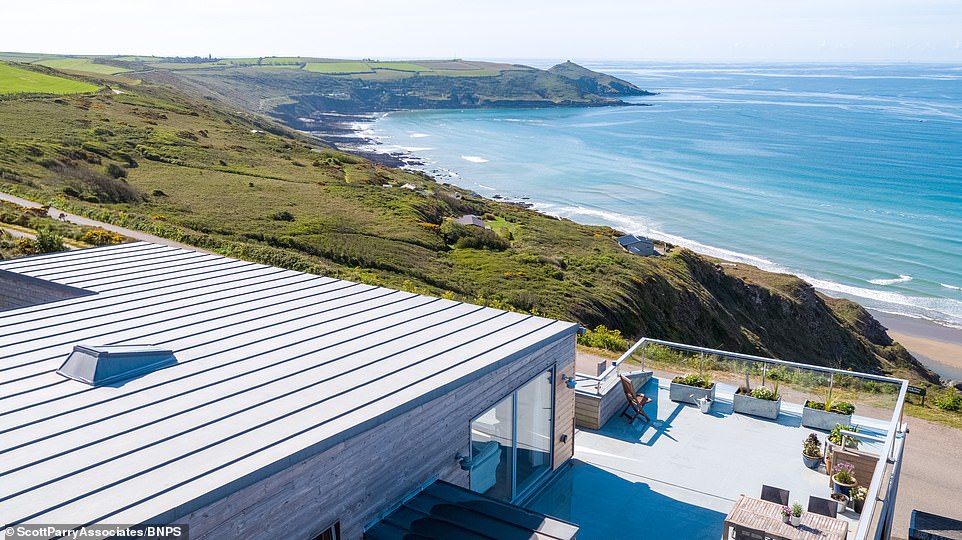 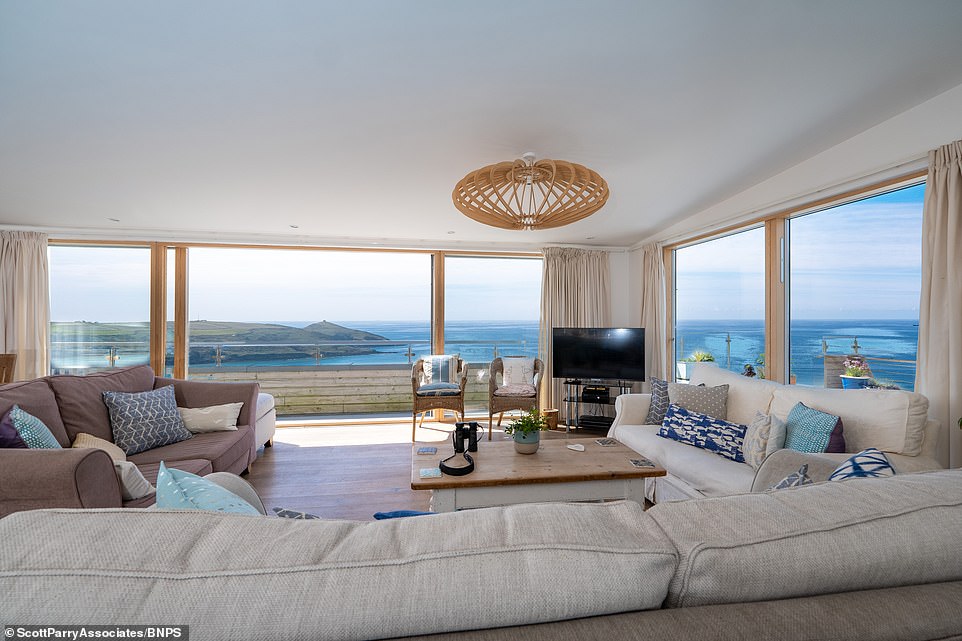 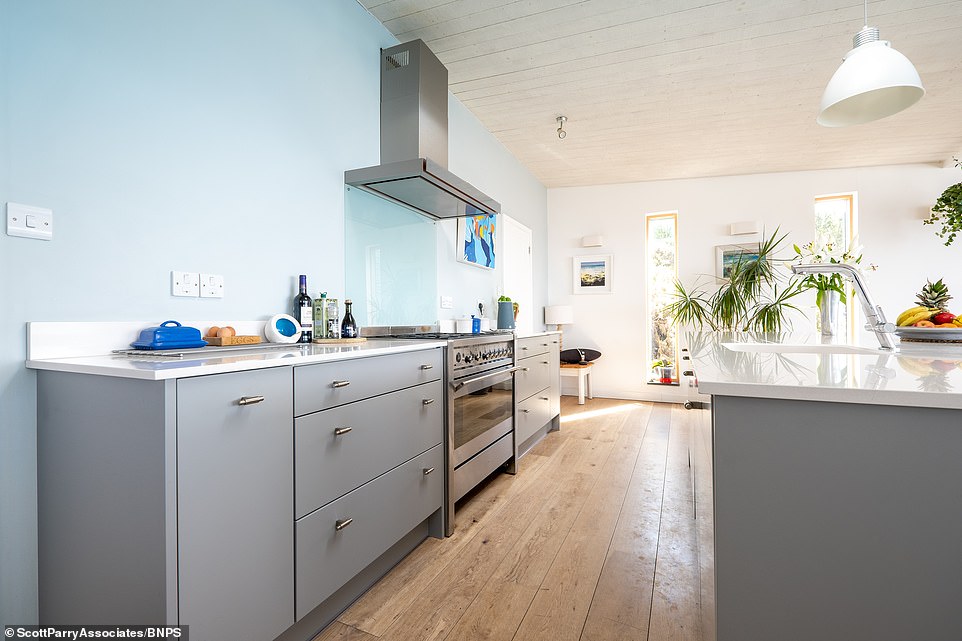 The house sits at the top of the 400ft high cliff and boasts views of Rame Head, Eddystone Lighthouse and Looe Island

The house sits at the top of the 400ft high cliff, with a path down to the beach.

Its panoramic view takes in Rame Head, Eddystone Lighthouse, Looe Island and as far as The Lizard on a clear day.

The restaurant has been run for 18 years by chef Matt Corner, a head chef at top country house hotels before he bought The View.

It has been designated as a Michelin Bib Gourmand – an award given for exceptionally good food at moderate prices – for eight years and Matt has appeared on ITV’s Cornwall with Caroline Quentin and Little Chefs series.

The house has about 2,000 sq ft of living space with a 27ft open plan kitchen/living room at the top of the property leading out to the 500 sq ft roof terrace.

There is also a snug, five double bedrooms and two bathrooms. 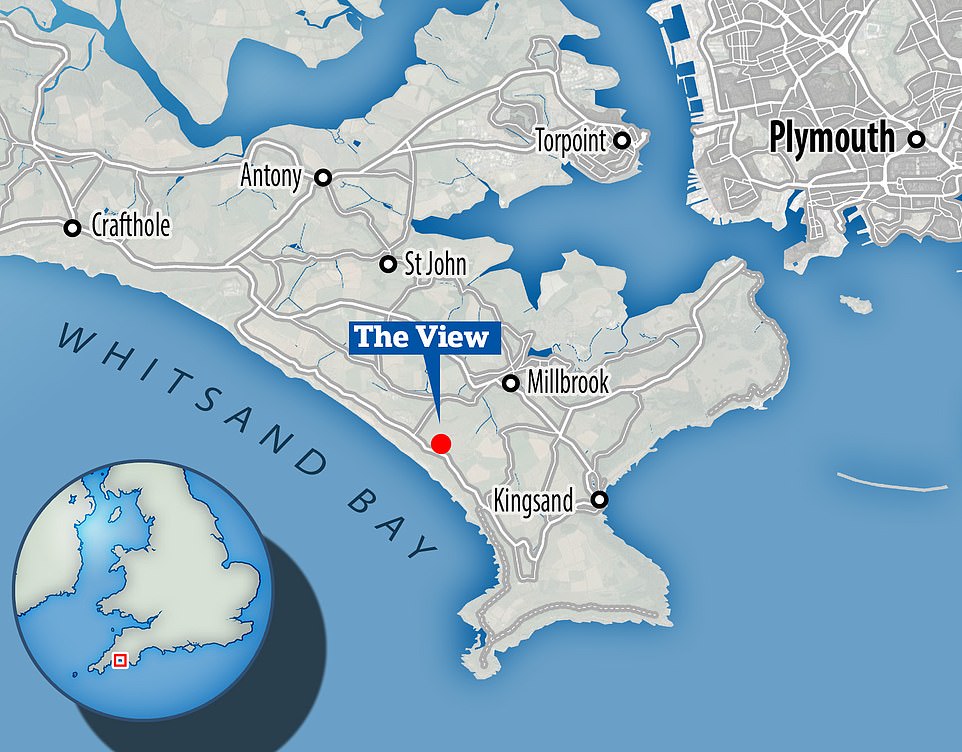 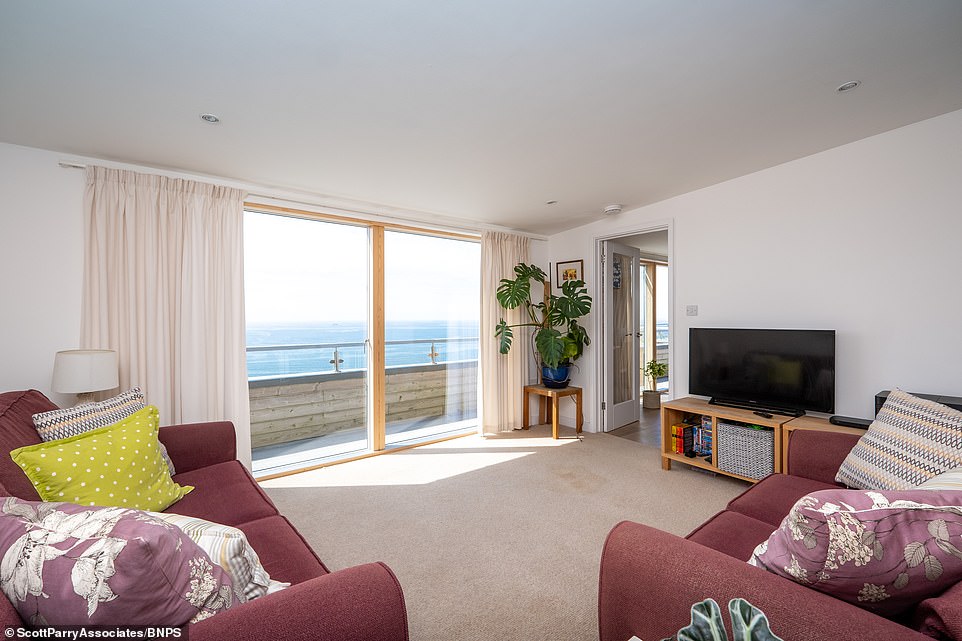 As well as gorgeous views, the large home also features five double bedrooms, a snug (pictured) and a roof terrace 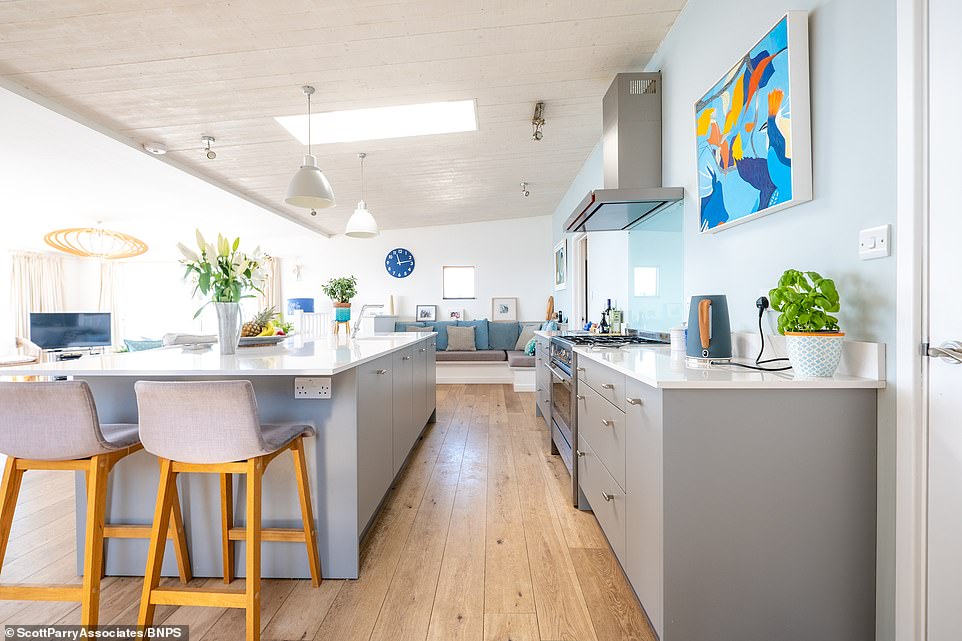 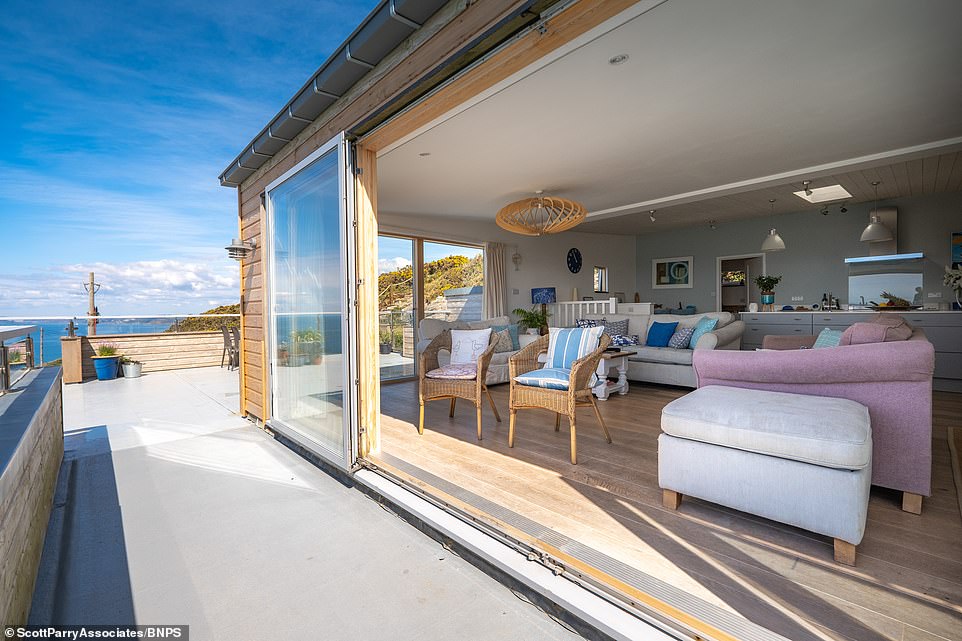 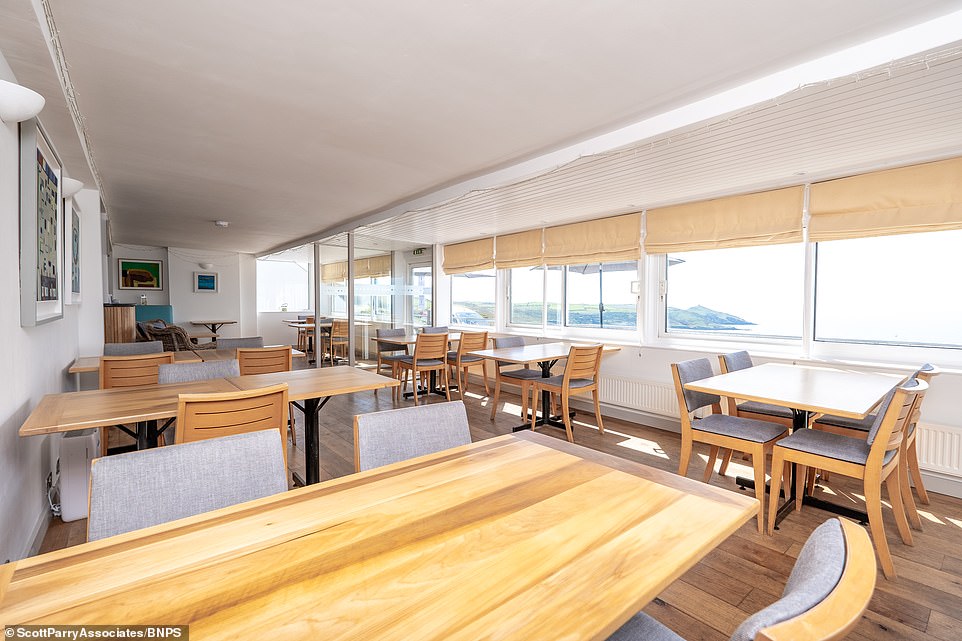 As well as the five-bedroom home, the new owners will acquire this 50-cover restaurant which is a popular spot in the area 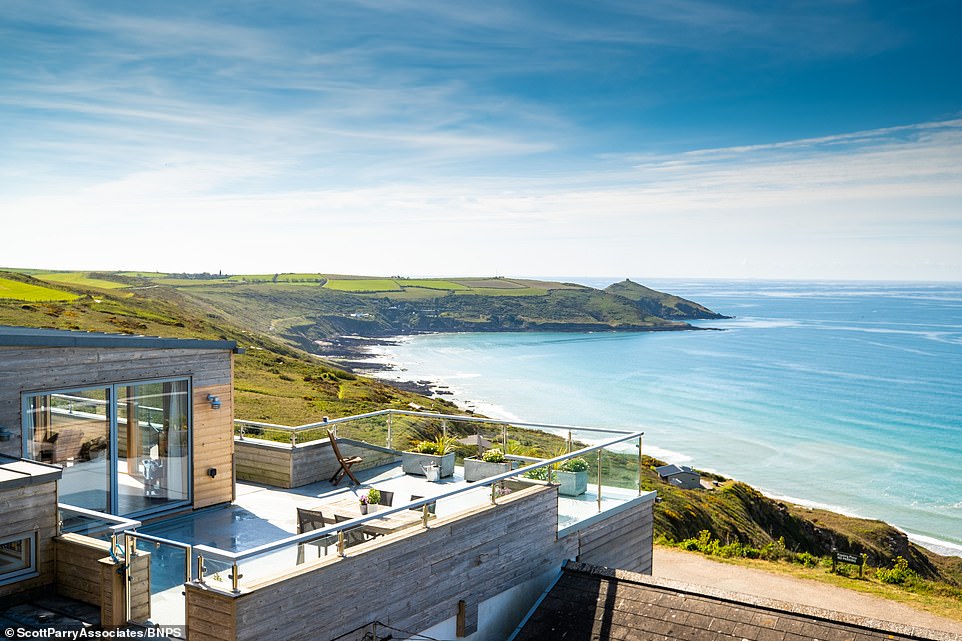 The restaurant is 1,488 sq ft and has an outside dining terrace, fully equipped kitchen, prep rooms and stores and a car park

Outside it has a private garden with a summerhouse and shed.

The restaurant is 1,488 sq ft with space for about 50 covers and has an outside dining terrace, fully equipped kitchen, prep rooms and stores, toilets and a large car park.

Estate agent Scott Parry said: ‘Whitsand Bay is noted for its original seaside chalets nestled into the cliff and this property sits at the top of the 400ft high cliff.

‘My client bought it 20 years ago, before that there was a cafe there. He has improved and extended it since he bought it.

‘He’s been a chef all of his career and I think he fancies a change now. 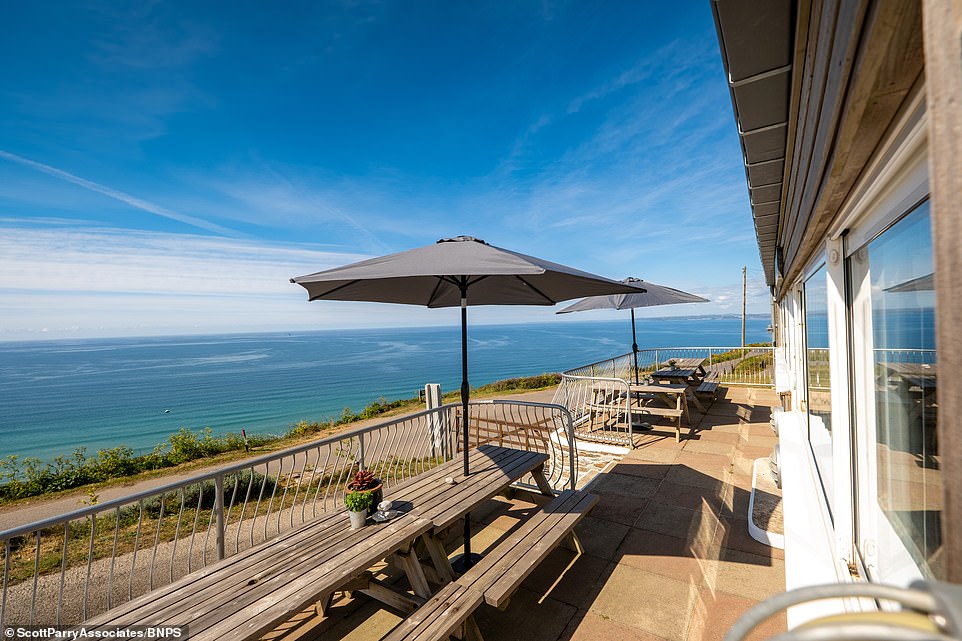 Pictured: the restaurant has been noted for providing guests with a fine dining experience in a world class location 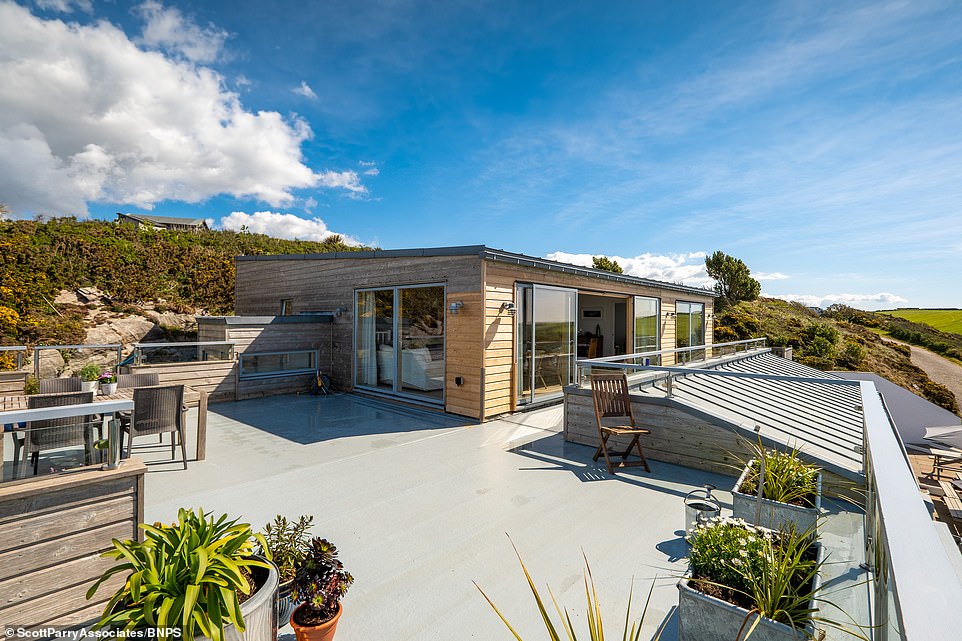 ‘Given its location, it’s one of those places where we imagine a chef/owner would take it on, it would do really well either carrying it on as fine dining or changing it to a more traditional beach cafe.

‘It could even be someone who just wants that nice seaside house and then they could hire a manager or sublet the restaurant, they wouldn’t need to run it themselves.

‘If you look along the whole of the UK coastline, you can’t find another property like this.

‘It’s totally dominated by that sea aspect, you can’t not look at it.

‘Whitsand Bay has notable surf spots and you can just walk down the cliffpath in the morning to go for a surf and then head back up to run the business.’