The Cabinet Office minister insisted the new trade agreement was the ‘best possible deal’ for the industry as a whole.

Fishing leaders have accused Boris Johnson of betrayal for the compromise he struck with Brussels over access to UK waters.

Twenty-five per cent of EU boats’ fishing rights in UK waters will be transferred to the British fleet over a transition period to 2026.

Mr Gove wrote in The Scotsman that it gives the UK ‘control over who comes into our territorial waters’ and the fishing sector will get a ‘major funding package’.

But Andrew Locker, of the National Federation of Fishermen’s Organisations, said the industry would be ‘absolutely worse off’ after the deal and would receive a fraction of the catch promised.

Cabinet Office Minister Michael Gove warned time was ‘very short’ as he acknowledged there were likely to be some ‘bumpy moments’ as the new arrangements came into effect. 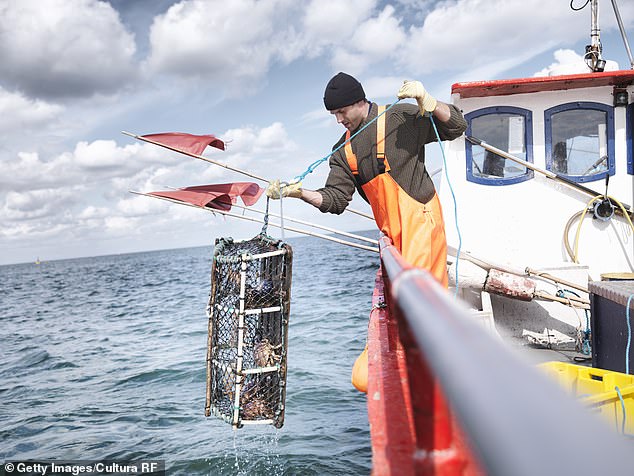 He said firms needed to be ready for new customs, while he urged UK citizens to take out comprehensive travel insurance to cover health costs and to check their mobile roaming policies to avoid charges if they were travelling to the EU.

‘I think lots of businesses are ready, particularly the larger businesses, some smaller businesses will still want to do a bit more in order to be ready,’ he told BBC Breakfast.

‘We are there to help them and the advice that we’re giving, and also the money that we’ve invested in making sure that people can be ready for customs procedures, is designed to help.

‘I’m sure there will be bumpy moments but we are there in order to try to do everything we can to smooth the path.’

Mr Gove rejected increasingly angry claims from Britain’s fishermen that Boris Johnson had failed to deliver on his promises made in the referendum campaign.

Under the terms of the agreement, 25% of EU boats’ fishing rights in UK waters will be transferred to the UK fishing fleet, over a five-and-half year transition period.

‘I think it is fair to say that we are in a stronger position than we were in the EU and in the common fisheries policy,’ Mr Gove told the BBC Radio 4 Today programme.

‘In the common fisheries policy we were only able to access about 50% of the fish in our waters.

‘It is the case that we are now getting a significant uptick in that number, so we will have by 2026 about two-thirds of the fish in our waters.’

However, Andrew Locker, chairman of the National Federation of Fishermen’s Organisations, said they would be ‘absolutely worse off’ as a result of the deal.

‘I am angry, disappointed and betrayed. Boris Johnson promised us the rights to all the fish that swim in our exclusive economic zone and we have got a fraction of that,’ he told Today.

‘We are absolutely worse off. When we were within the EU we used to trade fish with the EU.

‘We used to swap things we didn’t use with fish that they didn’t use and that enabled us to put together an annual fishing plan.

‘What we have got now is a fraction of what we were promised through Brexit. We are going to really, really struggle this year.’