In just a few hours, The Block’s final auctions will air on Channel Nine.

And ‘villains’ Sharon and Ankur looked rather nervous as they joined their co-stars ahead of the final episode.

The former Neighbours star looked glamorous in a tight blue evening gown, which hugged her figure for the occasion.

FIRST LOOK: The Block’s Sharon and Ankur (pictured) looked nervous as they joined their co-stars at the show’s final auction

Ankur looked handsome wearing a white suit with a black shirt along with a pair of stylish loafers.

The couple were joined by Sarah-Jane and Tom, who looking equally glamorous on set.

Sarah-Jane opted for a tight green leather-look dress which featured a structured bodice. 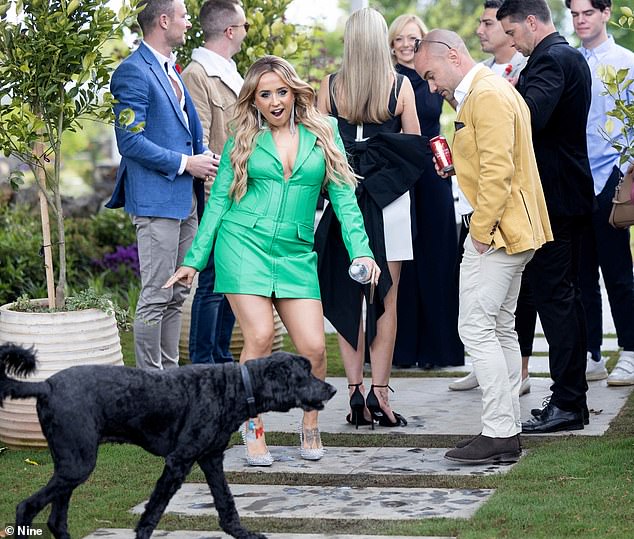 Sarah-Jane opted for a tight green leather-look dress which featured a structured bodice. She was seen standing with Tom and their rival stars

Tom, on the other hand, went for a mustard-hued blazer, crisp white shirt and a pair of beige slacks.

He finished his look with a pair of brown boots as he chatted to his wife.

The nervous energy of the auction was felt by everyone with Rachel and Ryan also filled with trepidation as they arrived on set.

Rachel opted for a thigh-skimming black and white frock which matched Ryan’s black suit for the big day.

The couple happily posed by their property as a number of people walked through the homes. 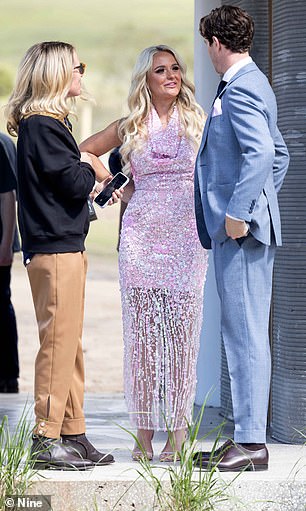 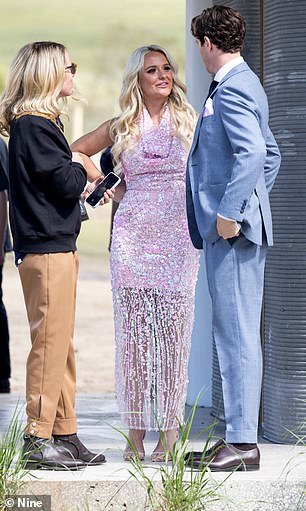 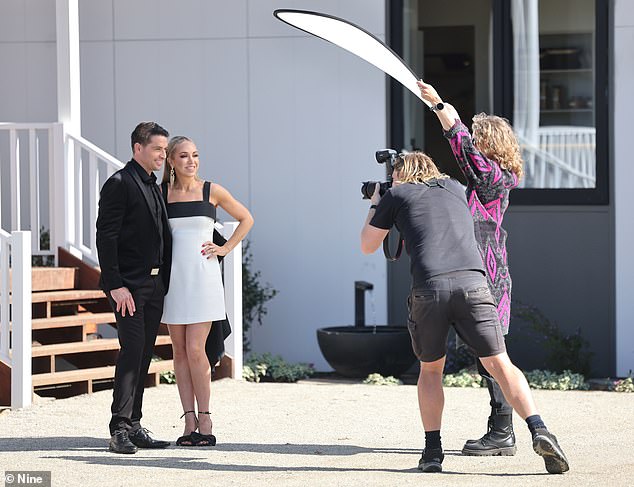 Dylan and Jenny kept their look glamorous with Jenny wearing a fitted, longline pink dress and Dylan opting for a blue suit.

Omar and Oz, two of this season’s most beloved constants, wore black and blue suits respectively for the day.

All eyes are on the auctions airing on Sunday night as viewers wait to see how much the teams pocket. 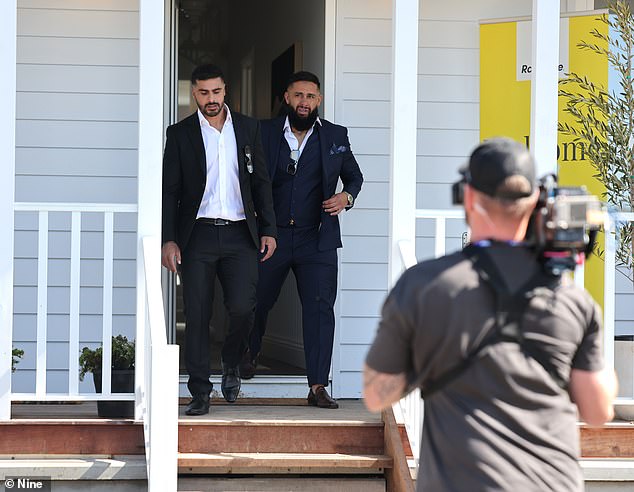 Scott Cam appeared on Nine this week, admitting he is ‘nervous’ the contestants’ renovated properties won’t be offloaded.

‘There’s a bit of trepidation from the buying public. I am very nervous,’ he said on The Today Show. 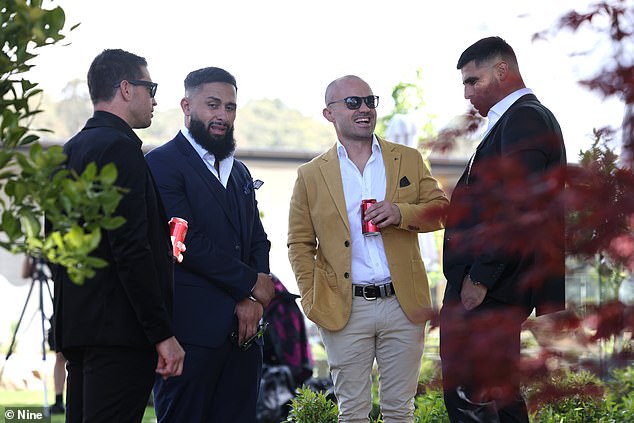 Ryan, Oz, Tom and Omar were all seen happily chatting with each other on the properties

He said the contestants’ hard work deserved to be rewarded and he would be gutted if they lost out.

‘I want these guys to make some money. They worked really hard and deserve to,’ he told hosts Karl Stefanovic and Amelia Adams.

He said the Blockheads will have the full support of the entire team to help them make a profit on their properties. 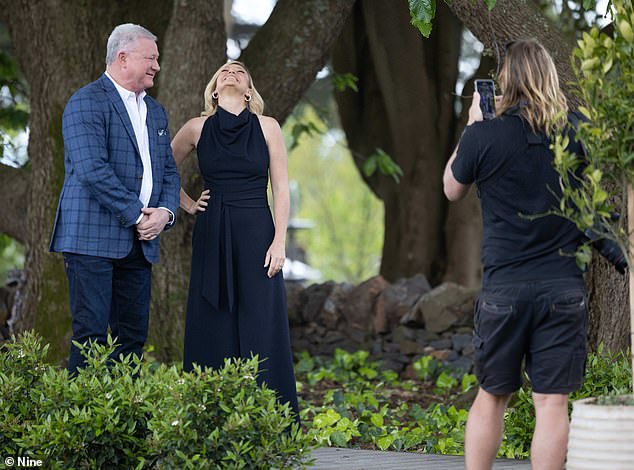 Despite promises of big sales, some real estate experts have expressed concern the properties won’t sell for within their $4million to $4.4million price guides.

This is because the median house price in the Gisborne area is about $1.1million.

However, sources at Nine are confident the homes will smash their reserves because of their ultra-stylish designs, great location and resale potential. 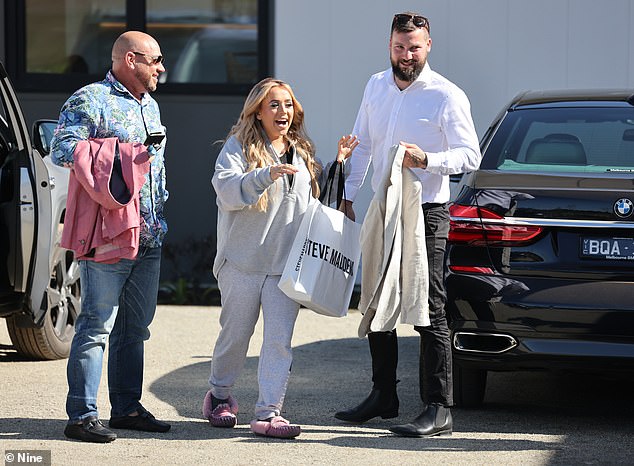 Kirsty Lee Akers, who made a $301,523 profit during the 2021 season with husband Jesse Anderson, predicts the ‘cooling’ market and overly ambitious reserve prices are a recipe for disaster.

‘I hope I’m wrong but I have a really bad feeling about this year’s auction,’ the country musician told Woman’s Day on Monday. 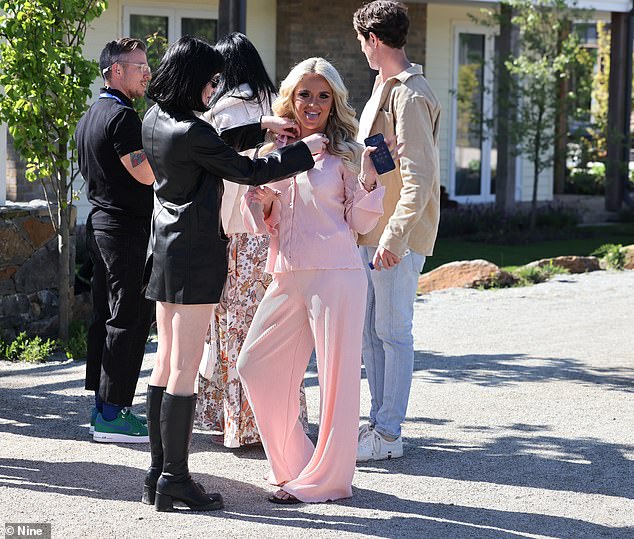