FIRST LOOK: George Clooney plays around with a football as he films beach scenes on Australia’s Hamilton Island for new movie Ticket To Paradise

The film set for upcoming romantic comedy, Ticket to Paradise, has been created in The Whitsundays.

And on Thursday, George Clooney, 60, was photographed filming scenes on Australia’s Hamilton Island for the new movie in which he stars alongside Julia Roberts, 54.

The A-list actor was spotted playing around with a football, and strolling up and down the idyllic beach, with a backdrop of the sparkling, blue ocean.

The upcoming movie is set in Bali, with George and Julia playing a divorced couple who travel to Bali in a desperate bid to stop their daughter, played by Kaitlyn Dever, from getting married.

The movie also stars Billie Lourd as Kaitlyn’s best friend, who travels with her to Bali, where she decides to marry a local.

Ticket to Paradise began filming earlier this month on the Gold Coast and in Brisbane, but recently moved to The Whitsundays. 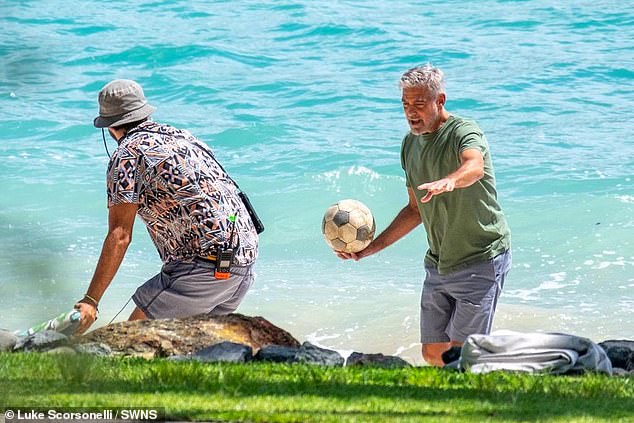 Fun times: The A-list actor was spotted playing around with a football in The Whitsundays