Scientists from Stanford University have successfully created the first human microbiome in a lab by combining 119 bacterial species found in the body, which they believe could lead to treatments for life-threatening gut infections.

Gut microbiomes consist of hundreds of bacterial species that live in the human digestive system and play a major role in human health by supporting the immune system and controlling digestion.

The synthetic microbiome was transplanted in mice, where it multiplied, protected the animal from E. coli and triggered development of a healthy immune system.

Researchers say they can now look at each microbe individually to uncover their role, allowing doctors to to mix cocktails of microbes in order to design tailored treatments.

The team mixed the 119 bacterial species and then cultured them where they were found to stabilize. The colony was transplanted into mice, where it was found to protect the animal from infection and helped it grow a healthy immune system

There are about 30 trillion cells in the human body, but the human microbiome consists of about 39 trillion microbial cells that include bacteria, viruses and fungi.

The gut microbiome controls the storage of fat and assists in activating the genes in human cells involved with absorbing nutrients, breaking down toxins and creating blood vessels.

These microorganisms also replenish the lining of our gut and skin, fix damaged cells and replace dead cells with new ones.

And they fight off invading microbes, which is what the Stanford team aims to analyze in their study. 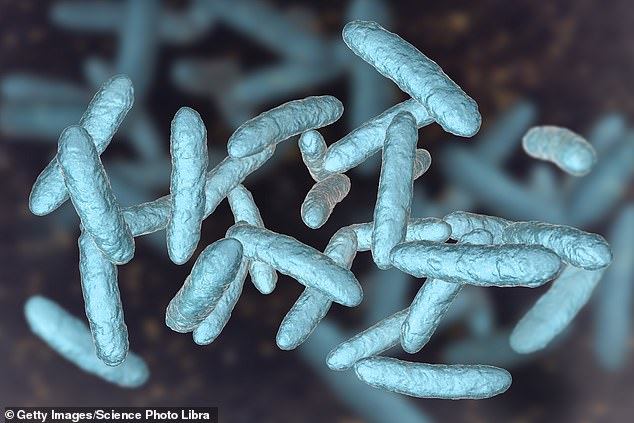 Researchers say they can now look at each microbe individually to uncover their role, allowing doctors to to mix cocktails of microbes in order to design tailored treatments (stock photo)

‘Many key microbiome studies have been done using fecal transplants, which introduce the entire, natural microbiome from one organism to another,’ the team shared in a statement.

‘While scientists routinely silence a gene or remove a protein from a specific cell or even an entire mouse, there is no such set of tools to remove or modify one species among the hundreds in a given fecal sample.’

The researchers decided to build their colony from the most prevalent bacteria and turned to the Human Microbiome Project (HMP), a National Institutes of Health initiative to sequence the full microbial genomes of over 300 adults.

Michael Fischbach, Institute Scholar at Sarafan ChEM-H and corresponding author on the study, said in a statement: ‘We were looking for the Noah’s Ark of bacterial species in the human gut, trying to find the ones that were almost always there in any individual.’

Fischbach and his team selected 166 bacterial strains found in a majority of people, but were only able to obtain 104, The New York Times reports.

The 104 species were grow in individual stocks and then mixed into a single culture to make a community of 119 strains that the team calls human community one, or hCom1.

The strains were able to coexist in the lab culture, but the team needed the same to happen in the gut of a living creature.

They introduced hCom1 to mice that were designed to have no bacteria present and  hCom1 was remarkably stable, with 98 percent of the constituent species colonizing the gut of these germ-free mice and the relative abundance levels of each species remaining constant over two months.

Then the team gave the mice a new community of 119 strains, dubbed hCom2, which made mice even more resistant to fecal challenges than the first.

The group with the second iteration were introduced to E. coli,  but their guts fought off the infection.

Prior studies have shown that a healthy natural microbiome leads to protection, but Fischbach and colleagues could take this a step further by iteratively eliminating or modifying certain strains to determine which ones specifically conferred protection.

They found several key bacteria and plan to conduct further studies to narrow down to the most critical species.

Fischbach believes that hCom2, or future versions of it, will enable similar reductionist studies that reveal the bacterial agents involved in other areas, like immunotherapy responses.

‘We built this consortium for the broader research community. We want to get this into as many hands as possible to have an impact on the field,’ said Fischbach.