A pine cone encased in amber for 40 million years is the first evidence of a rare botanical condition that has only been observed one other time in the conifer in 1965.

The frozen scene shows the pine cone sprouting seeds that produced embryonic stems, which is a process known as precocious germination and typically only found among fruits like tomatoes and grapefruit.

Pine cones are considered gymnosperms, which differ from flowering plants in that the seeds are not enclosed in an ovary but are exposed within any of a variety of structures – such as the rigid cone.

George Poinar Jr., a researcher at Oregon State College of Science, said in a statement: ‘That’s part of what makes this discovery so intriguing, even beyond that it’s the first fossil record of plant viviparity [when seeds or embryos begin to develop before they detach from the parent] involving seed germination.

‘I find it fascinating that the seeds in this small pine cone could start to germinate inside the cone and the sprouts could grow out so far before they perished in the resin.’

The pine cone derives from the Eocene Epoch, which lasted from 56 million to 33.9 million years ago.

During this time, climates were warm and humid and temperate and subtropical forests were widespread.

However, grasslands did not flourish throughout the world as they did in later time periods.

The earliest Eocene Epoch mammals were all small, but larger species evolved toward the end of the epoch. 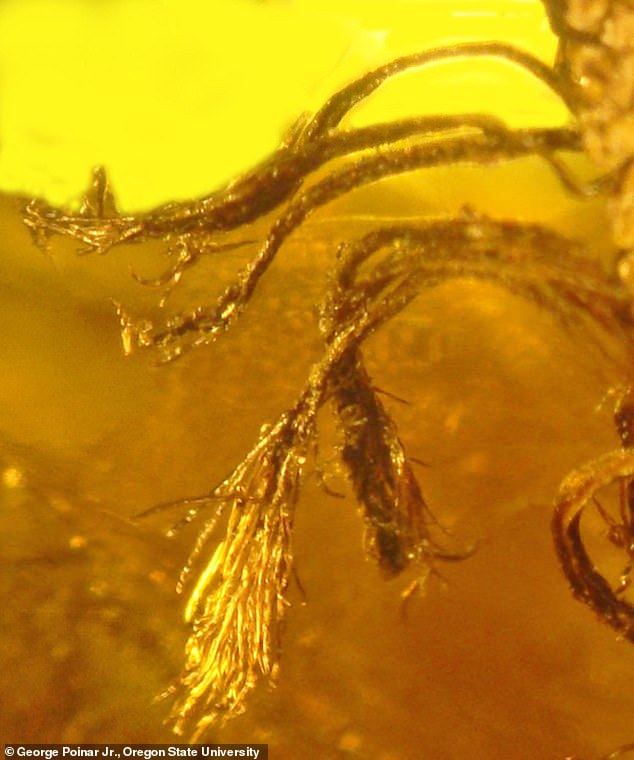 The frozen scene shows the pine cone sprouting seeds that produced embryonic stems, which is a process known as precocious germination and typically only found among fruits like tomatoes and grapefruit

Early bats, rabbits, beavers, rates and carnivore mammals roamed the Earth, along with the first appearance of the cetaceans, which includes whales and dolphins.

Amber has been used in jewelry for thousands of years, and is often found to hold remarkably well-preserved materials from eras long since passed.

The golden-coloured translucent substance is formed when resin from extinct coniferous trees became hardened and then fossilised.

Often insects, plant material, pollen and other creatures became trapped in the resin, causing them to be entombed within after it solidified.

‘In the case of seed viviparity in this fossil, the seeds produced embryonic stems that are quite evident in the amber,’ Poinar said.

‘Whether those stems, known as hypocotyls, appeared before the cone became encased in amber is unclear.

‘However, based on their position, it appears that some growth, if not most, occurred after the pine cone fell into the resin.’

Poinar continued to explain that some activity does happen after a creature or plant becomes encased in the ancient tree resin.

Previous discoveries have produced cases of insects laying eggs or parasites attempting to escape from a host.

‘In the case of the pine cone, the cuticle covering the exposed portions of the shoots could have protected them from rapid entrance of the resin’s natural fixatives,’ said Poinar.

Research on viviparity in extant gymnosperms suggests the condition could be linked to winter frosts.

Light frosts would have been possible if the Baltic amber forest had a humid, warm-temperate environment as has been posited, Poinar said.

‘This is the first fossil record of seed viviparity in plants but this condition probably occurred quite a bit earlier than this Eocene record,’ he said.

‘There’s no reason why vegetative viviparity couldn’t have occurred hundreds of millions of years ago in ancient spore-bearing plants like ferns and lycopods.’