Firms start work on ‘freedom passports’: Documents allowing people who have tested negative for Covid-19 to enter pubs, schools and workplaces are under development

Work is being carried out to develop coronavirus freedom ‘passports’ that will allow those who have tested negative to enter pubs, schools and workplaces.

Two firms have been awarded Government contracts for exploratory work on a new app that would allow people to prove they do not have Covid.

The Department of Health said no decisions had been made on introducing the passport.

The contracts envisage a system under which people are assigned a QR code on their smartphones linking to a digital passport that includes a photo of them.

After a Covid test, this would be updated at the test centre and when people want to enter a venue they could present their QR code as proof of their negative status.

Work is being carried out to develop coronavirus freedom ‘passports’ that will allow those who have tested negative to enter pubs, schools and workplaces

After scanning in the code, the venue could refuse entry to those without a recent negative result.

The idea is controversial and critics argue it would in effect create an ‘apartheid’ system between those who have the virus and those who do not.

It is not clear how those without smartphones would be able to prove they were negative.

The Department of Health source said the scheme was ‘exploratory work’ and the system was not being introduced imminently. ‘It is about looking at ways we could use this in future,’ the source added. ‘It is looking at whether it would be possible.

‘There are no plans to introduce immunity passports.’ 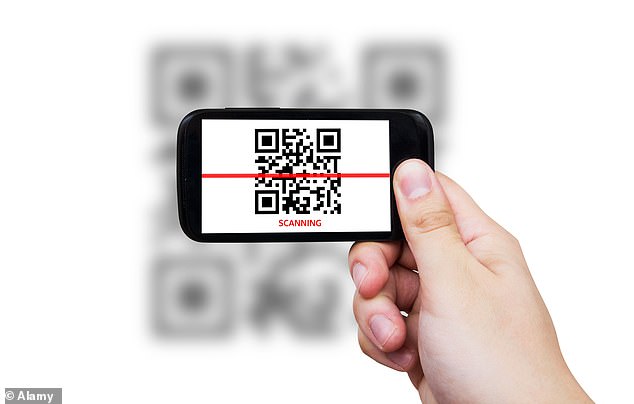 Ministers have previously ruled out introducing passports for those who have had a vaccine. This had led to fears that those who declined to have the jab would be discriminated against.

The proposal for the ‘negative Covid-19 test certification’ system was revealed on the Government’s contracts checker.

It shows a £42,000 contract was signed with Netcompany UK for a ‘Covid-19 Certification/Passport MVP’ in November.

The contract is described as being to ‘develop a negative Covid-19 test certification minimum viable product’ – a simple version of the app to prove it would be feasible to go forward with.

A similar contract – worth £34,000 – was awarded to the Hub Company. Under its scheme, individuals would sign up to an app giving them a personal QR code.

The contracts seen by the Mail refer only to Covid test passports.

The Department of Health and Social Care said it was ‘continually exploring ways in which we can return to normality’, including through technology.

A spokesman added: ‘We have no plans to introduce immunity passports following this vaccination programme.’