Residents have been evacuated after a Yorkshire industrial unit broke into flames after a ‘massive explosion’, which was understood to be gas cylinders exploding.

Firefighters are currently tackling a huge blaze which broke out on an industrial estate, believed to be a scrapyard, at around 5pm in Dewsbury, West Yorkshire.

Witnesses reported hearing a ‘massive explosion’, which was believed to be gas cylinders exploding, according to a statement from West Yorkshire Police.

Water is being pumped from the nearby River Calder in a bid to help extinguish the blaze. There have been no reports of injuries so far.

Dramatic photographs shared to social media showed plumes of thick smoke billowing into the sky from the building inferno.

Firefighters are currently tackling a huge blaze which broke out on an industrial estate, believed to be a scrapyard, at around 5pm in Dewsbury, West Yorkshire 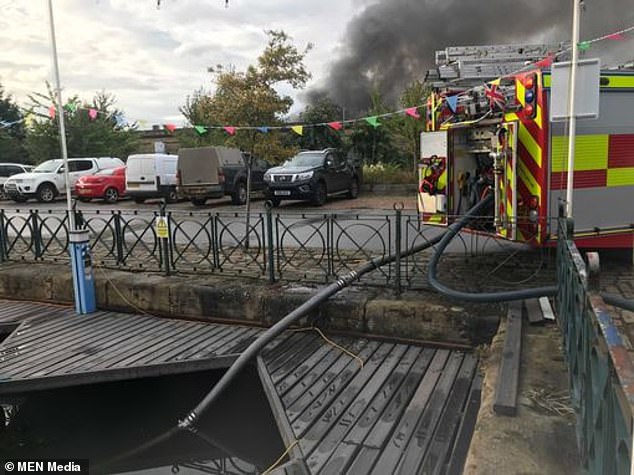 Water is being pumped from the nearby River Calder (pictured) in a bid to help extinguish the blaze. There have been no reports of injuries so far

Residents have been urged to avoid the area while around a dozen fire engines try to bring the fire under control at the scene in Mill Street East, Savile Town.

Residents have been advised to keep their windows closed and Mill Street East has been evacuated, West Yorkshire Police confirmed.

Witnesses reported hearing a loud ‘bang’ and a ‘massive explosion’ before the industrial unit burst into flames.

Ayah Alfawaris, 32, from Leeds who was visiting the area for the first time, said: ‘As we got to Dewsbury there was heavy traffic so we got out of the Uber and started walking to our destination.

‘We saw at least four ambulances and three fire brigades on one street with some police cars. They started blocking off the roads and diverting traffic.

‘The fire did seem to get bigger with time and I was a bit scared it was going to get closer to where we were.

‘Firemen came with a truck to pump water out of the canal next to the pub. The manager gave them a crate of beer for later which was nice.’

Plumes of smoke could be seen ‘billowing’ from a few miles away, with one person claiming they could see the smoke from the M1 motorway. 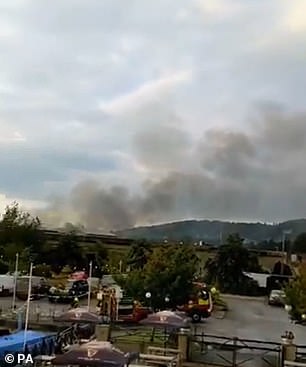 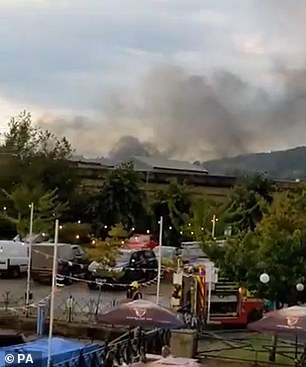 One man said: ‘I’m sat here a couple of miles away and heard a crescendo of loud banging, which I initially thought was a lorry carrying loose metal nearby.

‘Looking outside after it got extremely loud, smoke was billowing in the horizon from the industrial estates near Mill Hill East.’

One Twitter user said: ‘There was a massive explosion in Dewsbury. Black smoke everywhere!’

And another wrote: ‘Somethings blowing up in Dewsbury.’

One person, who was watching the emergency unfold from a nearby pub, commented: ‘The pub just sent a case of beer cans to the firemen! Love this!

‘Disclaimer: they are not drinking them, they put them away.’

Mill Street East and Warren Street remain closed and there is currently a cordon in place around the scene.

West Yorkshire Fire and Rescue Service tweeted: ‘We currently have 12 fire engines & specialist units in attendance at a fire at an industrial unit in Saville Town, Dewsbury.

‘All persons are accounted for. Please avoid travelling through the area.’

‘There is no access to Mill Street East, Dewsbury, at this time.’