EXPRESS INFORMER > News & Politics > Firefighter father-of-four, 39, thanks family and NHS staff who saved him from coronavirus

A firefighter stricken with coronavirus has spoken from his hospital bed in a video tribute to his wife and the NHS staff who saved his life.

Steve Landon, 39, from Wrexham, North Wales, has been on a ‘relentless rollercoaster’, having picked up the deadly disease before being moved into intensive care.

He is now on the mend as he recovers on an isolation word, and Steve offered an update on his progress three weeks after he was admitted to Wrexham Maelor hospital with cold-like symptoms.

Steve Landon, 39, has recovered from the coronavirus after an ordeal that saw him moved into intensive care after difficulty breathing 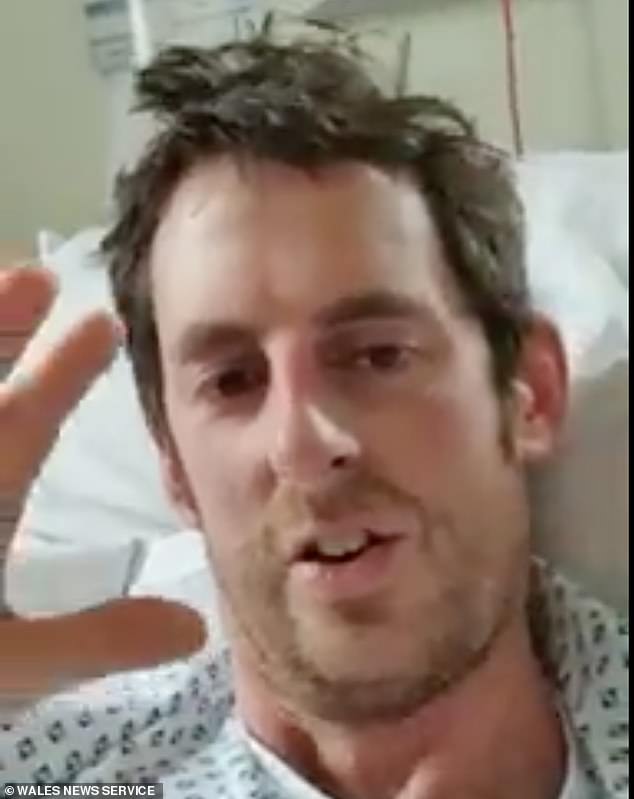 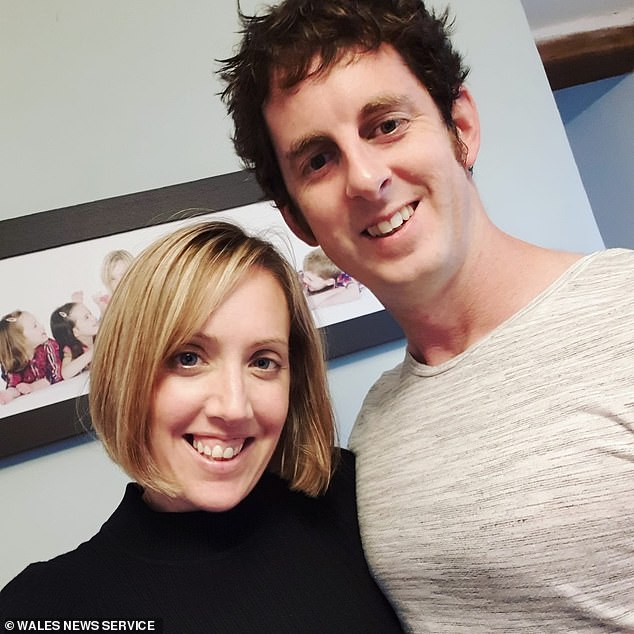 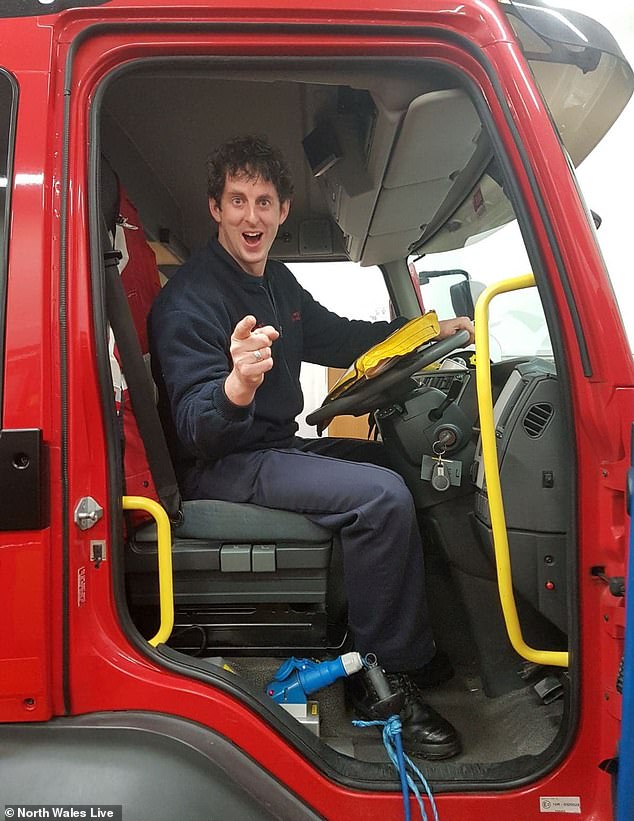 The firefighter from Wrexham, North Wales, said he is now ‘getting stronger every day’

As his condition worsened, he collapsed twice and suffered breathing difficulties before spending ten days in critical care.

After making it through the ordeal, the father-of-four made a clip to sing the praises of his wife Becky, who also works at the hospital, and other workers who acted like ‘his family’.

Steve, who briefly removed his mask and breathed heavily throughout, insisted that without the help of staff, he might not have been here to tell his story.

‘Hi everyone,’ he said. ‘I can’t take my mask off for very long because I’m still on a lot of oxygen… but I thought now’s the chance to do a quick video on my progress.

‘First of all, I want to say a massive thank you to all of you who have been sending prayers and thoughts and support. 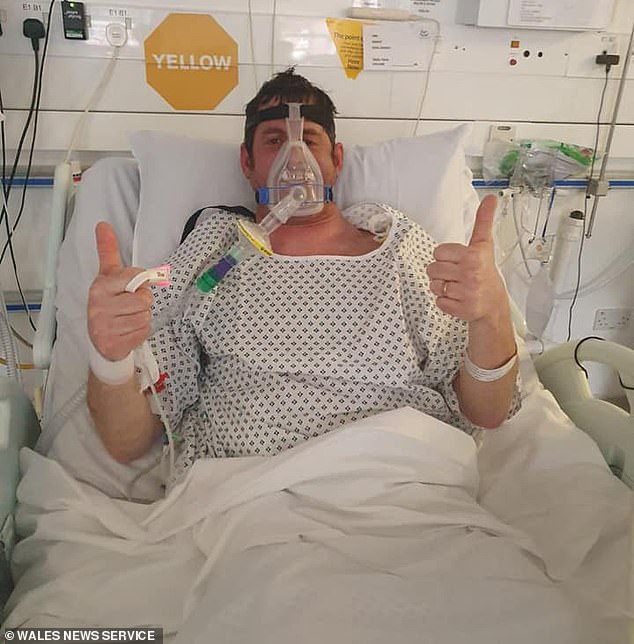 ‘I have been reading your messages and they have encouraged me. Becky has been amazing. Very supportive looking after the kids. What a wife.

‘But I do have to say a massive thank you to the NHS staff who have been my family when I haven’t been with mine.’

Choking back tears, he added: ‘If it weren’t for them, I can honestly say that I wouldn’t be here. Awesome. Just amazing.

‘The good news is, I’m getting stronger every day. I even managed to do press ups this morning, much to the amazement of the physios and consultants.

‘They are impressed with my progress and yes, I will be coming home soon. Keep praying. Thank you for all your support.

Steve and Becky live in Wrexham with their children Caleb, Evie, Abigail and Seth. 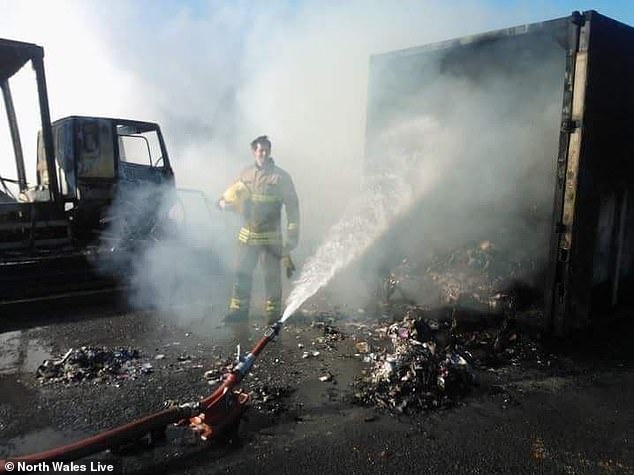 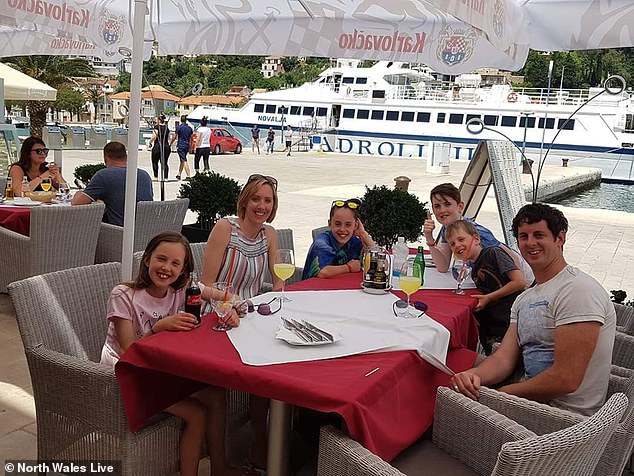 Steve and Becky have four children together, Evie, Abigail, Caleb and Seth

He was taken to hospital on March 28 after coming down with mild symptoms before he was moved to intensive care when his condition began to deteriorate.

Steve spent more than ten days in intensive care where he was put on a CPAP (pressurised oxygen) machine. He also had to have a chest drain put in when one of his lungs collapsed.

But now he is starting to recover, Steve hopes to be able to trial a new drug that could help other Covid-19 patients in future when he is well enough.

Sharing the video on her Facebook page, Steve’s wife Becky, who works on the Maelor’s children’s ward, posted: ‘It was three weeks today that Steve got taken into hospital via ambulance. 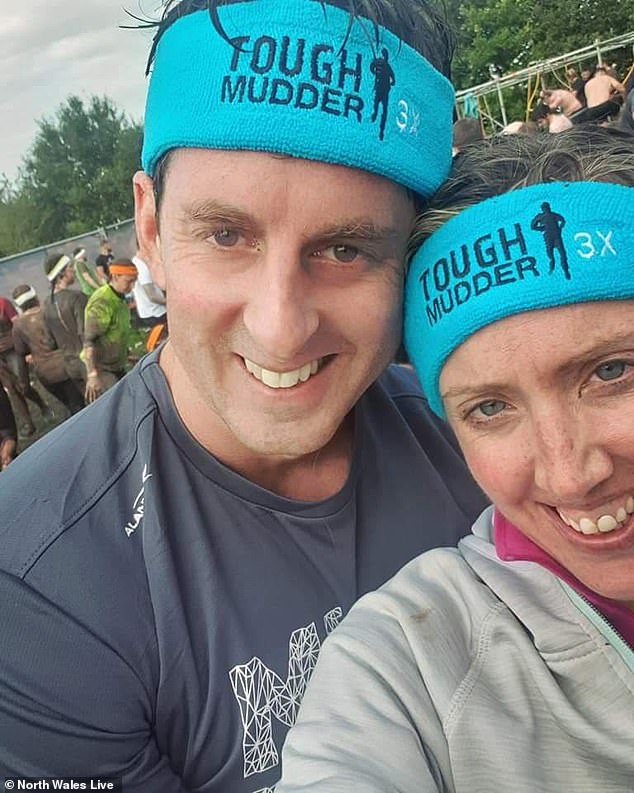 ‘I can only describe it as a rollercoaster. Today he has recorded a video message which shows you the impact this virus can have even on the healthiest of people.’

Becky said Steve’s harrowing plight spurred a colleague’s husband to run an ultra-marathon around his garden to raise money for PPE (personal protective equipment) for staff at Wrexham Maelor.

He ran 6,000-7,000 laps which is the equivalent to 45-50 miles completing it in just under 13 hours – the average shift worked by health care professionals.

She added: ‘Please donate to this amazing cause.

‘Steve was told by doctors that his fitness saved his life but I know that it was his fitness, an amazing medical team and an army of people praying.

‘On the home run now Steve.’