Wests have shocked the high-flying Parramatta Eels to squeak out a one-point win courtesy of a stunning Jackson Hastings field goal right at the death of their Easter Monday clash.

The 21-20 victory came after coach Michael Maguire stripped Brooks of the team’s chief playmaker duties and handed them to Hastings in what Andrew Johns labelled a demotion.

Brooks reacted by playing his best game of the season, setting up one try with a brilliant cutout pass, while Hastings was the driving force behind the win, leading the side around the park before calmly slotting the winning kick with just seconds to spare.

The entire Tigers team swamped him after the field goal as Maguire roared in triumph in the coach’s box. 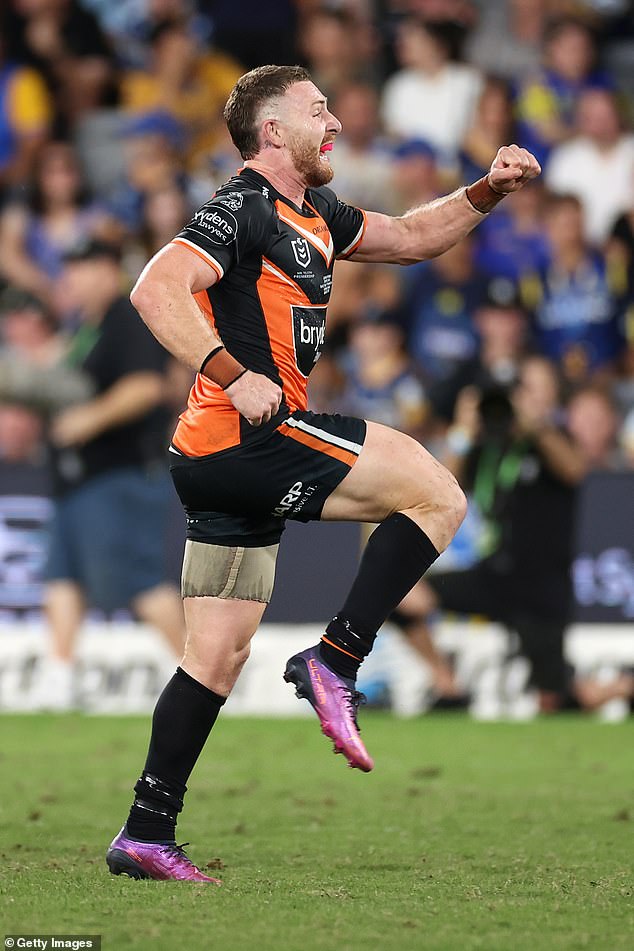 The Tigers’ newly installed halfback had a great game as he took chief playmaking duties from Luke Brooks, who was the man of the match

Luciano Leilua crashed over for Wests’ first try in the 10th minute, with Clinton Gutherson striking back off a well-weighted Mitchell Moses kick three minutes later.

Brooks’ long pass for for David Nofoaluma’s first try followed, putting the side up 10-6.

The winger scored again in the 25th minute after some brilliant lead-up play from hooker Jake Simpkin and Starford To’a, who both broke the Parramatta line with smart footwork and great vision.

Isaiah Papali’i went over to narrow the margin to 14-10 six minutes before the break. 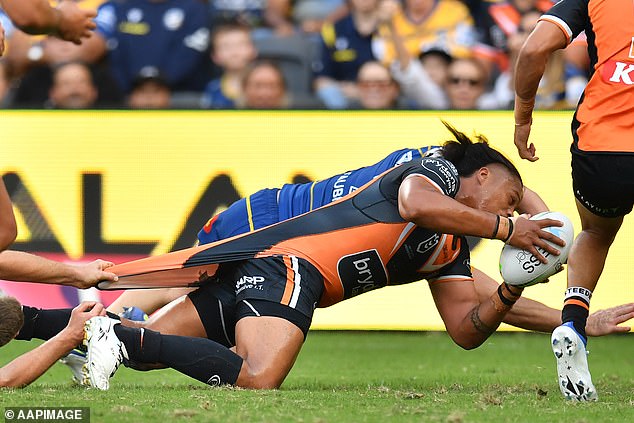 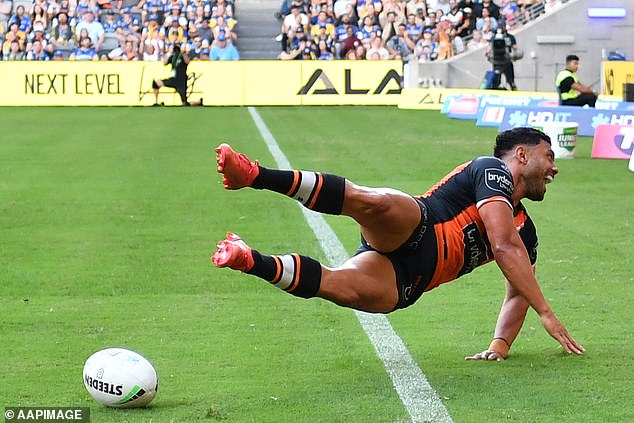 Embattled Tigers coach Michael Maguire switched Brooks away from halfback as soon as Hastings became available after serving a suspension, and the move paid early dividends as Wests looked far more direct with the ball and troubled Parramatta with their right-side attack.

Asked at halftime why he seemed to have found a spark, Brooks gave credit to his halves partner.

‘Jacko [Hastings] is doing a great job controlling the team and I can just play off the back of that,’ he told Fox Sports.

‘Half an hour Michael Maguire was about to be sacked and now he’s a genius,’ he said.

‘We came here today with that man Michael Maguire perhaps in his final days, perhaps we’re seeing a resurrection.’

Despite their lead, Wests trailed Parramatta for possession, partly because they conceded five penalties to the Eels two, with three six again calls hurting them. 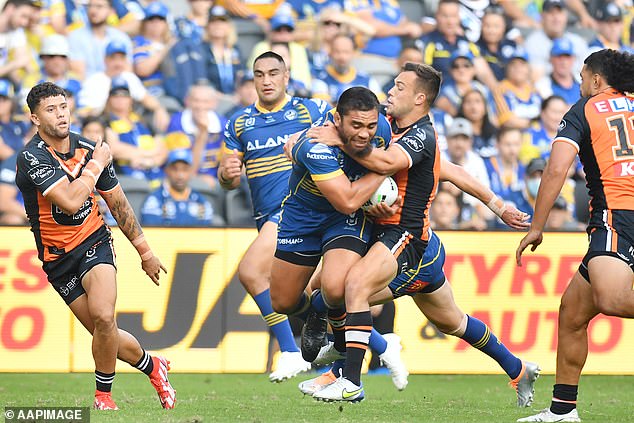 Brooks wraps up Eels forward Isaiah Papali’i, but the Tigers couldn’t stop him when he crossed the stripe in the 34th minute

But the errors that have plagued the side so far had dropped away, and they had five fewer missed tackles than their opponents – a huge improvement for one of the worst defensive sides in the NRL.

The Tigers started the second half on the front foot as well, with hooker Jake Simpkin winning a rare scrum against the feed to spark an attacking raid in Eels territory.

A few minutes later Ken Maumalo planted the ball in the corner of the in-goal to extend the visitors’ lead to 20-10, with Maguire finally roaring with delight in the coach’s box instead of the angry yelling fans have become accustomed to this year.