A driver who claims he was fired for having depression has joined a class action against DPD with the widow of a man who died after missing hospital appointments to escape £150 fine from the courier firm.

Alistair Mcleary, from Glasgow, developed depression after witnessing a bin lorry crash into pedestrians in 2014, killing six people and injuring 15, and believes DPD dismissed him because of his mental illness.

Meanwhile Ruth Lane, from Bournemouth, was left devastated when her diabetic husband Don died in 2018 after missing three hospital appointments for fear of being fined £150 by DPD.

The duo are among a group of 76 former drivers who are taking the company to court to fight for employment rights, with Ruth telling the BBC: ‘I don’t want anyone to go through what I went through and it didn’t need to happen.’

Alistair Mcleary, from Glasgow, witnessed the bin lorry disaster in 2014 while driving and believes DPD fired him because of the depression that went on to develop after the accident.

He explained: ‘Being a courier driver is not for everyone you’ve got to have a mentality because it is very, very stressful.’

In 2013, after 15 years of employment with DPD, Alistair claimed he was misled and told he would be better off self-employed.

He said: ‘I gave up service with DPD because I thought I was getting a better life. I wasn’t. But I couldn’t just walk away when I had a mortgage, a car to pay and my wife had just become disabled.’ 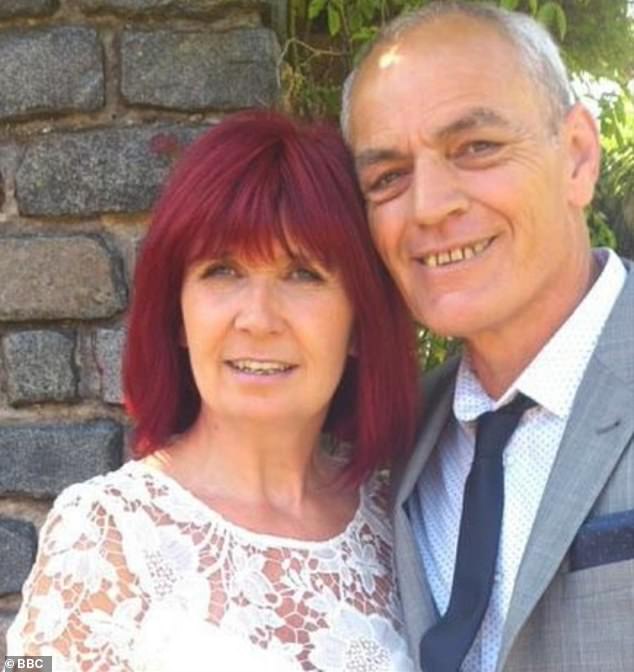 The former DPD driver has joined forces with Ruth Lane, from Bournemouth, who was left devastated when her diabetic husband Don died in 2018 after missing three hospital appointments for fear of being fined £150 by the company

Most DPD drivers are on self-employed franchise contracts, which don’t come with any benefits. There are two other types of contracts – worker and employee.

DPD strongly refute many of the claims and now offer a new type of contract with more rights, but say most drivers choose the self-employed franchise contracts.

The company strongly refutes that Alistair was misled and say anyone who wishes to change contracts is given details of the differences between contracts.

Things got really bad for the driver when he witnessed a terrible accident after a bin lorry crashed into a group of pedestrians in the centre of Glasgow.

He said: ‘I don’t know how long I was there. I managed to phone the depot, crying, asking for help. They said it’s not their problem.’ 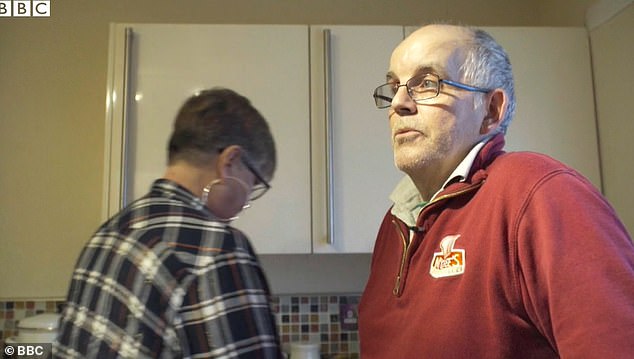 His wife Carolyn said: ‘I can’t describe the state he was in and how angry I felt that he had been left to make his own way, drive that van out of Glasgow back to that depot.

‘When you can clearly see the state that he is in but that was fine as long as they got their van back or any parcels that were in it that had to go back to the depot.’

Alistair was signed off work with depression. He was dismissed shortly afterwards and he believes this was because of his medical condition.

Alistair has an ongoing claim for unfair dismissal and disability discrimination against DPD. 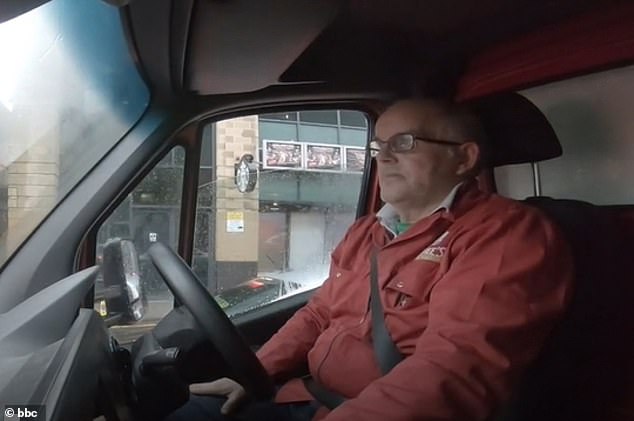 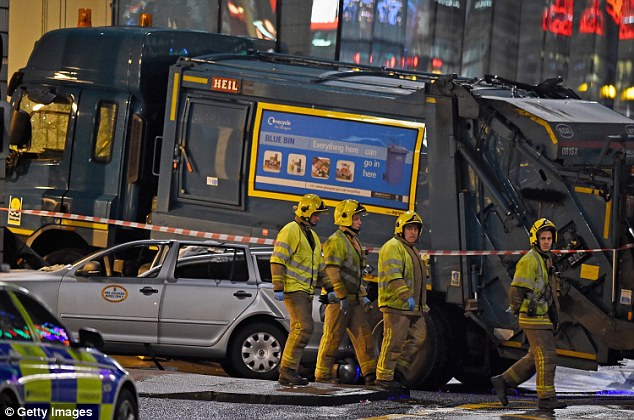 DPD deny that Alistair was unfairly dismissed. They said his franchise contract with DPD was ended following an assault on another individual at the DPD depot.

Alistair claims that wasn’t the reason for his dismissal.

He said: ‘Their attitude is, “You are self employed, we don’t have a duty”. But they do.

Meanwhile Ruth said she wanted to get involved with the case because: ‘I can’t seem to live without him and I think he deserves to be fought for.’ 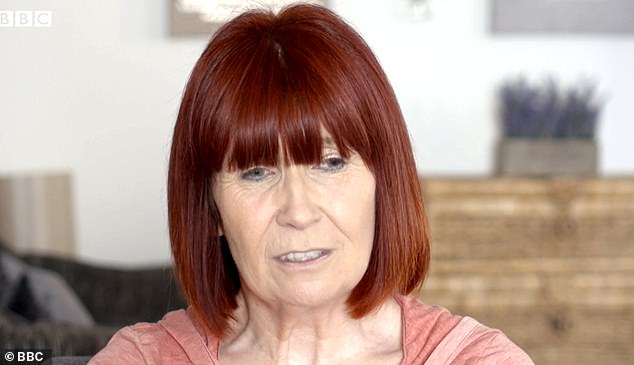 Ruth, who is representing her husband Don during the case, has been left devastated by his death in 2018

Her husband Don worked as a DPD driver for over 20 years with Ruth saying: ‘He was a good courier, he was really good.

‘I would call him old school. He was the one with the road maps, he used to get. Very very proud of him.’

She said: ‘Constantly driving, no breaks, timed deliveries, even before he delivered his first parcel he was working, loading up the van unpaid. They don’t get paid until their first delivery.

‘Don was diabetic, he was on insulin and it was so important that he eat and rested and went to the toilet.’ 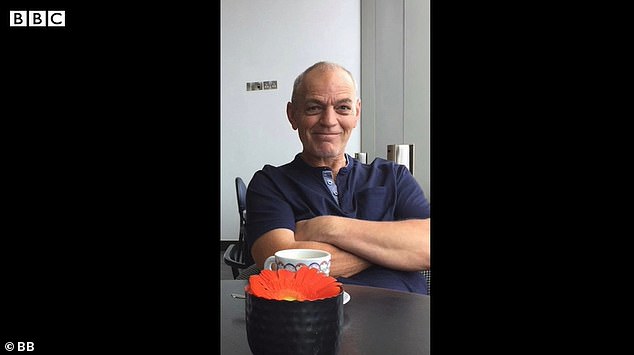 She continued: ‘In the July, he had an appointment. He even worked on the Sunday so that he could have that day off because there’s no way that you can drive  because they put really strong drops in your eyes.’

At the time, DPD charged their franchise drivers £150 per day when they were unable to work if they didn’t provide a substitute driver.

The case against DPD

Jacqueline McGuigan, who is an employment lawyer who is fighting for the group, saying: ‘It’s a very important case and if they succeed, it will have an effect on all other DPD drivers.’

‘DPD work on the self employment model because it is hugely beneficial to them.

‘If they say to someone, you are self employed, there’s no rights to holiday pay, no rights to sick pay. It is a huge financial benefit.’

She said: ‘Companies sell this model on the basis that if you go self employed you will earn a higher salary rate, you will earn more money, you have flexibility.

‘In reality, when you boil it down, you have to pay your taxes, your own expenses, you don’t get 5.6 weeks holiday, they’re on less money.’

Jacqueline  originally lost her clients case against DPD, but they won the right to appeal and the case is continuing.

She said: ‘Often these workers are the lowest end of the market they are very, very hard working. All they really want to do is earn a living and put food on the table.’

Jacqueline said: ‘Winning this appeal would send ramifications through the carrier industry. It would give employment rights to courier workers from day one.

DPD responded further on these allegations: ‘We were devastated by Don’s death We immediately abolished the £150 charge in February 2018. Introduced the groundbreaking Driver’s Code, which provides sick leave, paid holiday and a pension.

DPD say all drivers are given the option on an annual basis of applying to switch between any of their three driver contract types.

‘We also actively encourage everyone to take independent advice and they confirm in their contract that they have taken the advice they thought was necessary.’

‘The franchise arrangements remains the most popular options with our drivers’

The £150 fine applied to hospital appointments, sick days and holiday requests which were outside of the two weeks permitted per year.

Ruth explained: ‘He’s had many fines but this one in particular, I checked it and looked at the date and I said, “Oh my god, that’s when you went to your hospital appointment for your eyes”.’

She went on to say that Don missed three subsequent hospital appointments for his diabetes following this fine, for fear of being charged £150.

She said: ‘He drove their van, wore their uniform, with their logo on. He’s not self employed.’

Calculating Don’s take home pay, Ruth said: ‘So the total that would be deducted every four weeks plus VAST would be £1560 so he had to earn that much first before he started earning. Extortionate.’

Ruth is representing Don in the class action employment tribunal case against DPD, along with 76 other drivers who are all fighting for worker status.

DPD said that the fine was a mistake for which they are profoundly sorry.

They say they were supporting Don with his medical condition and that his manager told him that he shouldn’t be worried about taking time off for medical appointments.

They also say they worked with Don for a number of years in relation to his health and he operated a shorter route close to his home so that he could attend hospital appointments.

In the run up to Christmas 2017, Don’s health started to deteriorate with Ruth explaining: ‘December 30th, we had a lovely Christmas. He was workign six days leading up and he looked really really pale.

‘And then of course I get home that night and I say, “Are you feeling a bit better?” And he goes, “I was sick later. There was blood.”‘

‘I mean do you know that poor soul, Wednesday, Thursday, Friday, he was delivering 80 parcels. He was feeling lousy. Poor poor soul, he must have been so desperate mustn’t he?’

She continued: ‘So when the Saturday came, and he had the day off, I was still going to be working that night.

‘So I just remember kissing him on his head, which I’ll regret for the rest of my life because that was the last time I got to kiss him.’

‘Don’s one of those people. He’s just one in a million really, you know.’

They told the BBC that the old breach system for owner drivers was replaced by a clear and consistent points-based service failure system which measures contract performance.