A ‘mushroom cloud’ soared into the skies in Kent this morning as a huge fire tore through an industrial building.

Gas bottles were said to have launched hundreds of feet in the air as witnesses reported seeing and hearing two explosions, before ten fire engines were scrambled to battle flames in the early hours.

A former Royal Engineer who lives nearby said it reminded him of gas explosions he saw while working with the Army.

Firefighters were called to the scene in Vicarage Lane in Hoo, near Rochester, at 4.30am on Friday, where flames and a plume of black smoke could be seen.

Members of the public were being asked to avoid the area.

Video on social media shows huge flames from the blaze lighting up the night sky, while people posting online talked of an explosion.

The fire has continued to burn and at one point on Friday morning a billowing mushroom cloud of smoke was seen rising up into the sky.

Joe Discipline, who lives nearby, said: ‘Around 4/4.30am a huge explosion shook the house and windows. I jumped out of bed to see the sky was orange.

‘There was then a second explosion, just as big, and that’s when I started to record.’

As the blaze burned, a huge plume of thick black smoke billowed hundreds of feet into the air, prompting the fire service to tell nearby members of the public to close windows and doors.

Gas cylinders were involved in the blaze.

No casualties have yet been reported, the fire service said.

Paul, 60, who chose not to give his second name, lives on St Mary’s Island, across the River Medway from the fire, where he awoke and watched from around 5am. 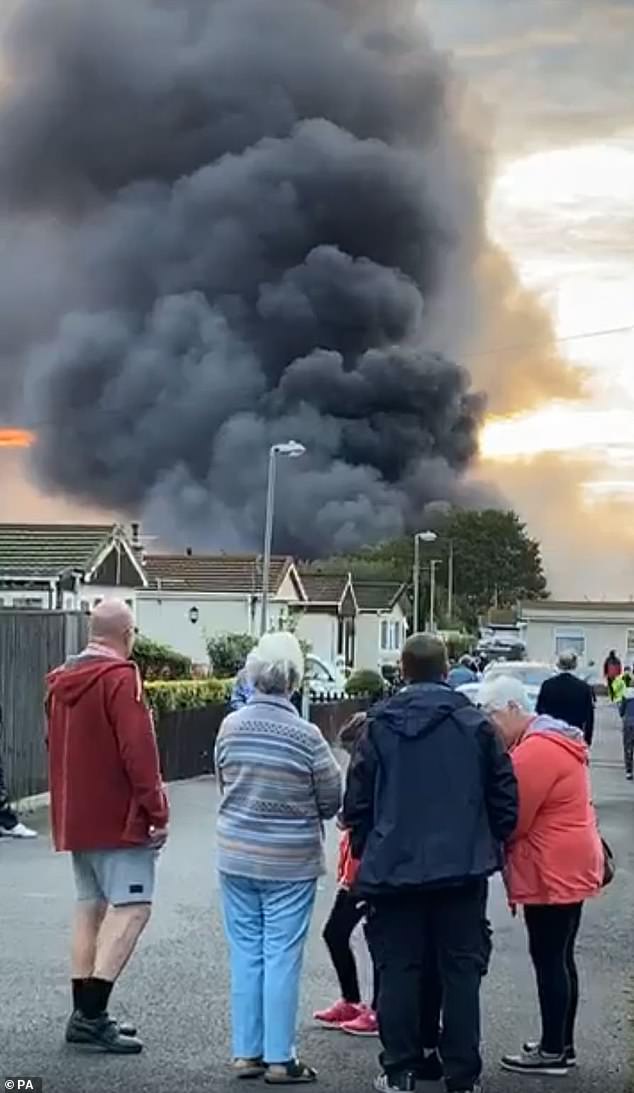 People took to the streets to catch a glimpse of the huge explosion in Hoo, Kent, this morning

‘I heard cracking and things exploding, so then started to video it – then all of a sudden, boom, it was a big, big explosion,’ the sales manager said.

‘I was thinking, is it going to be like Beirut? At the end of the day, you see the mushroom cloud, then there might have been a secondary explosion which was even bigger, so I was just a little bit worried.

‘It was eventful to wake up to, that’s for sure.’

A former Royal Engineer, Paul said the the explosion reminded him of gas explosions he had seen while working with the British Army.

‘I was just concerned that nobody was hurt … because of that size of explosion, it’s going to blow a few windows out, that’s for sure,’ he added.

Ten fire engines were sent to the scene as firefighters continued to tackle the blaze.

‘Ten fire engines and a height vehicle are in attendance, and crews are working to tackle the blaze.

‘Firefighters are advising the public to avoid the area while the emergency services deal with the incident.’