Chair of the Financial Conduct Authority Charles Randell will step down from the role next year, bringing an end to a tenure which experienced plenty of criticism of the regulator.

Randell, who became chair in April 2018, has written to Chancellor Rishi Sunak to commence the process to appoint his successor at FCA and the Payment Systems Regulator.

His time at the FCA has not been short of controversy, with the watchdog facing criticism from regulated firms, consumers and politicians for its handling of a number of scandals.

The FCA has embarked on an era of ‘transformation’, both in terms of its processes and culture, in the wake of the Woodford, London Capital & Finance and Connaught affairs.

Randell himself announced he was ‘profoundly sorry for the mistakes we have made’ after a high-profile report on the FCA’s failings.

Campaigners Gina and Alan Miller of the True and Fair campaign have been among those calling for Randell’s resignation for some time.

FCA boss Nikhil Rathi, who took over from now-Bank of England Governor Andrew Bailey in October last yet, has spearheaded the restructuring of the regulator.

The FCA said in a statement: ‘Under Charles’s leadership as chair, the FCA has established a significant multi-year transformation programme to become a more proactive, data-led and forward-looking regulator. The FCA has successfully transitioned to a new executive team, which is rolling out detailed strategies to support its transformation.’

Commenting on his departure, Sunak thanked Randell for his work ‘during this important period’, citing the regulator’s work in the post-Brexit regulatory transition. 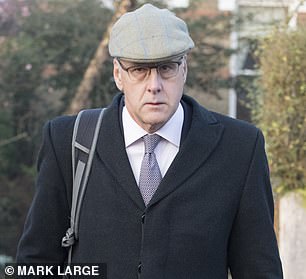 ‘Charles has led both Boards during the UK’s transition to our new position outside the EU, through the vital economic response to the COVID-19 pandemic and supporting the important transition following Nikhil Rathi’s arrival as new CEO of the FCA.’

Randell added: ‘As the FCA prepares to implement its new wholesale, retail and data strategies under an established new executive, now is the right time for a new Chair to carry on the close and continuous oversight of our transformation.

‘During the pandemic, the FCA stood up for consumers and businesses, while the markets we oversee proved resilient, laying the foundations for record capital raising to support the recovery.’