Football fans now have only a few more days of waiting to endure before the men’s FIFA World Cup finally commences in Qatar.

After an agonising four-and-a-half-year gap since the last tournament, the host nation will kick off Qatar 2022 on Sunday against Ecuador in Al Khor.

England, meanwhile, play their fist match against Iran the following day, as Gareth Southgate’s men seek to finally bring it home after 56 years of hurt at the World Cup final on December 18.

This year, players and fans alike will see a host of new technologies that have never been seen at a FIFA World Cup.

Here’s a look at the innovations at Qatar 2022, from AI-powered limb-tracking to a demountable stadium inspired by Lego.

Technologies at the FIFA World Cup this year include AI-powered limb-tracking, an official ball embedded with a sensor, sensory viewing rooms and a demountable stadium inspired by Lego

Semi-automated offside technology is akin to goal-line technology, except that the cameras continuously track moving objects rather than the static goal line.

It is a clever AI-powered system that will help match officials come to the right decision quickly – without causing frustrating delays to gameplay.

The technology tracks players’ limbs to detect if they’re in an offside position and sends an alert to the video assistant referee (VAR).

Qatar’s stadiums have cameras installed under the roof, which collect data on up to 29 data points on every player’s body 50 times per second.

These data points spread from the tips of a player’s feet, to their arms and the top of their head.

Using footage from the cameras, AI will track when exactly a pass was made and what position an attacking player was in, relative to the defending players.

It will determine if any part of the player was offside in half a second and then send an alert to the VAR operator, who can validate and confirm the information and notify the referee. 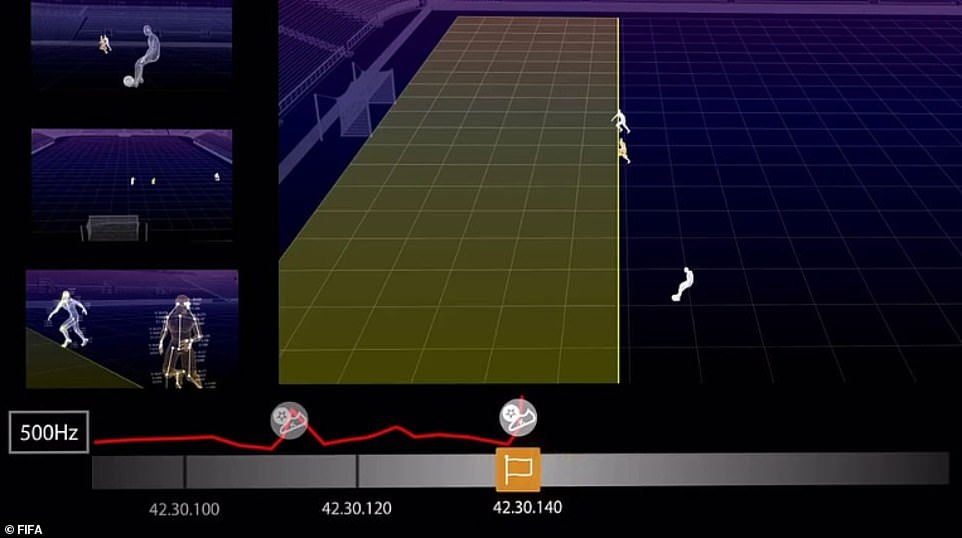 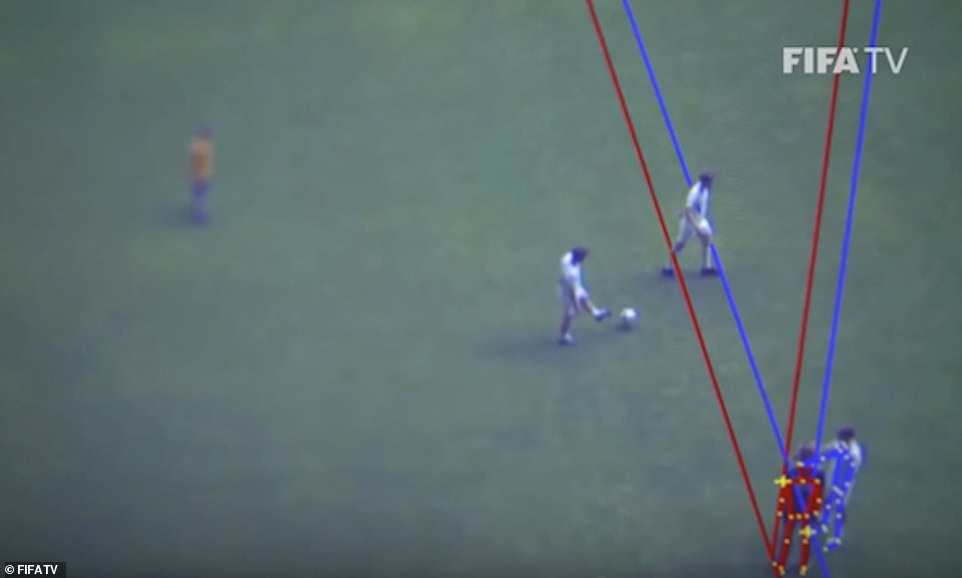 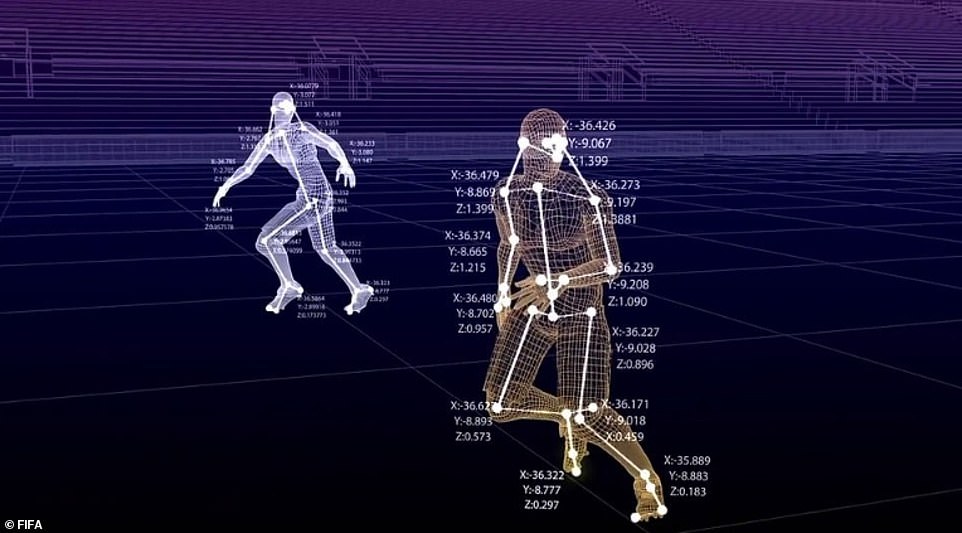 The new system relies on 12 cameras installed underneath the roof within each stadium. Optical tracking data looks at 29 points on each player, covering their limbs and extremities

Al Rihla, the official match ball for this year’s tournament, is a ‘smart’ ball with a spherical sensor placed in its centre.

This sensor will send data to the video operation room 500 times per second, allowing a precise detection of the kick point.

The connected ball will work in tandem with semi-automated offside technology to ensure that the position of the ball, as well as the players, can be accurately judged during crucial moments.

The sensor is held aloft in the middle of the ball by a suspension system created by manufacturer Adidas. 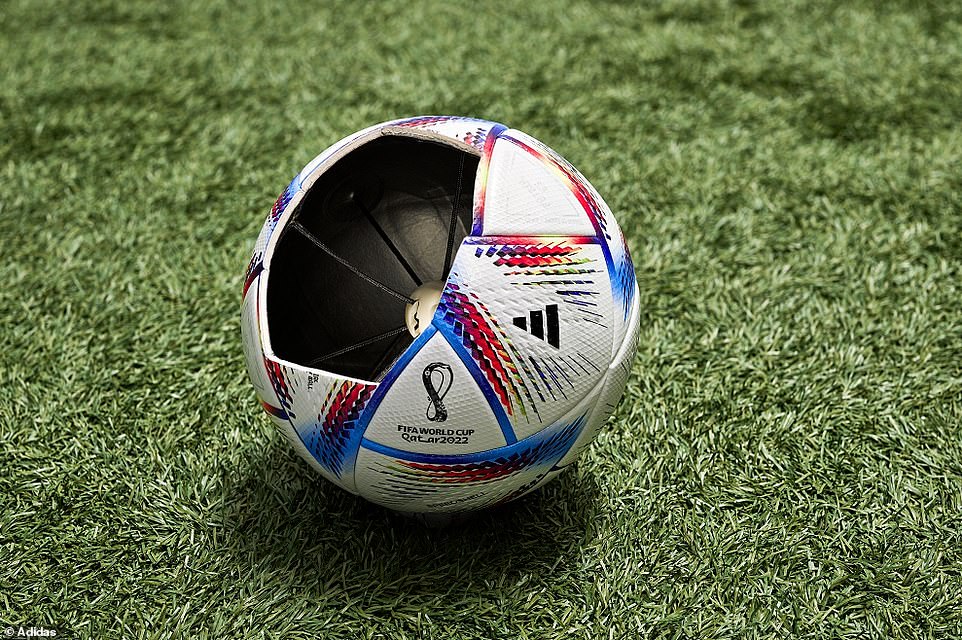 Argentina vs Saudi Arabia (10am)

(All times are kick off in GMT)

It is also powered by a rechargeable battery that’s charged by induction –  a type of wireless power transfer used for smartphones.

No charging takes place during play. Instead, all connected match balls are charged before each game in induction cradles.

Adidas said a charged ball lasts for six hours of active use on the pitch, and in standby, the ball can last up to 18 days.

Other innovations for this year’s match ball are a polyurethane skin with ‘micro and macro textures’ and a 20-piece panel exterior that lets it move faster when airborne, to reflect the increasing speed of the sport.

According to FIFA, Al Rihla – meaning ‘the journey’ in Arabic – travels faster in flight than any ball in the tournament’s history.

It’s also been made exclusively with water-based inks and glues, to make ‘sustainability a priority’, FIFA said.

FIFA had to move the World Cup back an extra six months so it would be played during winter rather than summer, due to the ‘potential health risk’ from Qatar’s searing summer heat.

But even though it’s winter in Qatar, the weather will be anything but cool when players take to field, with average temperatures reaching 78°F (26°C) in November and 70°F (21°C) in December.

Therefore, Qatar has invested in cooling technology to bring the temperatures down and prevent potential heatstroke for players, officials and spectators.

Using solar-powered energy, outside air is cooled and then distributed through grills in the stands and large pitch-side nozzles, which look a bit like the front of washing machines.

The systems use insulation and spot cooling – removing heat from areas with self-contained, portable air conditioning units – to make them as environmentally-friendly as possible.

The tournament’s stadiums will act as a barrier to exterior heat and each contain a cold bubble of air within, according to officials.

Using an air circulation technique, cooled and purified air is pumped around the stadium and then drawn back, re-cooled, filtered and pushed out again.

‘We are not just cooling the air, we’re cleaning it,’ said Dr Saud Abdulaziz Abdul Ghani, a professor at Qatar University who worked on the system for more than a decade. 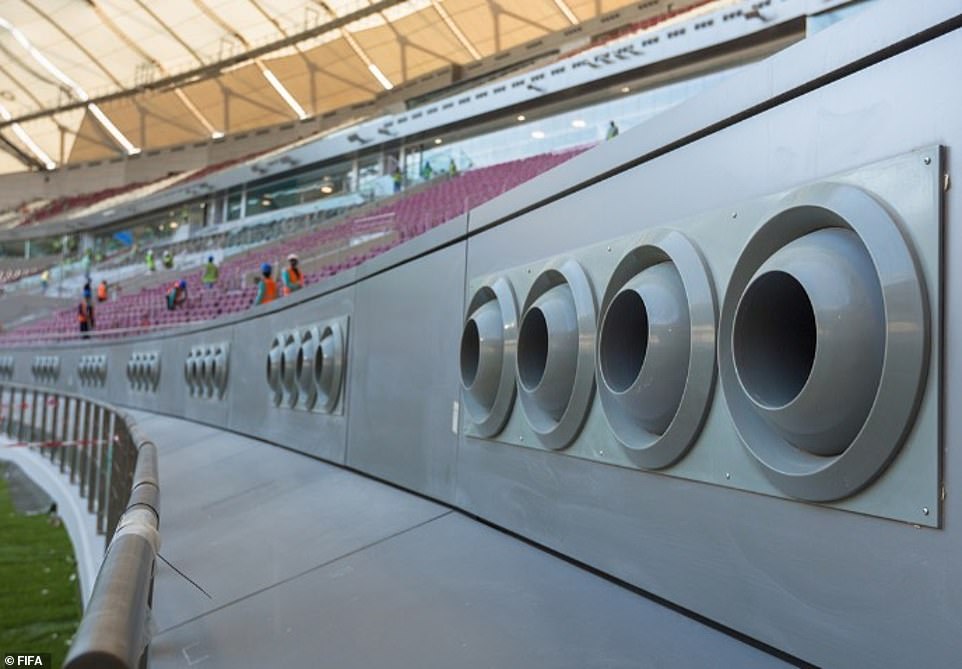 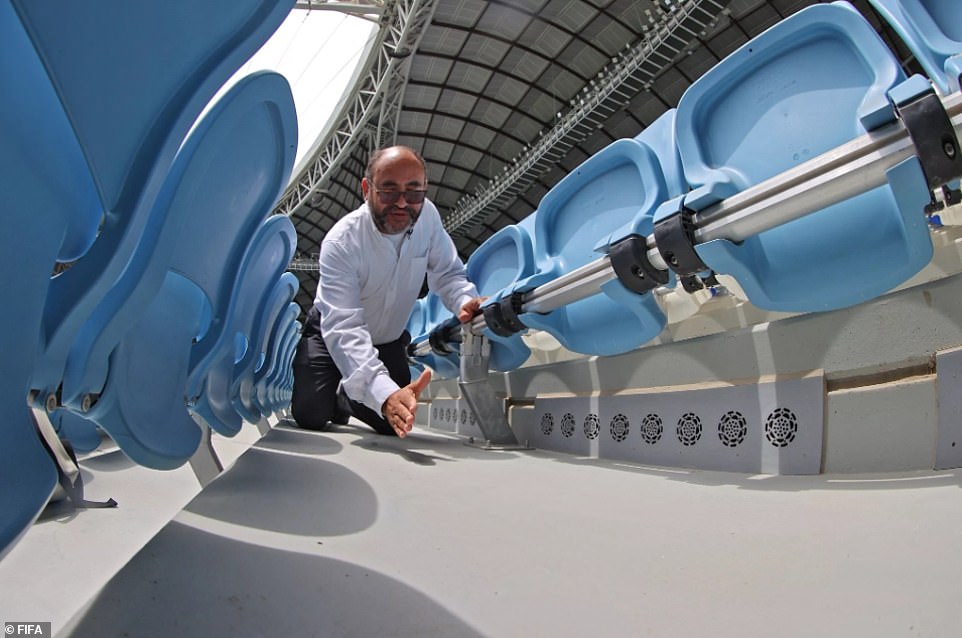 Dr Saud Abdulaziz Abdul Ghani (pictured), a professor at Qatar University, worked on the air cooling system for more than a decade

‘We’re purifying the air for spectators. For example, people who have allergies won’t have problems inside our stadiums. We have the cleanest and purest air there is.’

The technology is now fitted in seven of eight Qatar 2022 stadiums, with the only exception Stadium 974, which is fully-demountable and features natural ventilation.

One of the eight stadiums at this year’s tournament, called Stadium 974, is the first temporary venue in FIFA World Cup history.

As the name suggests, Stadium 974 is made from 974 recycled shipping containers made of stainless steel that will be taken apart when the tournament is finished.

Conceived by Spanish architecture firm Fenwick Iribarren, the stadium’s design was initially inspired by Lego bricks and the way they comfortably stack on top of each other. 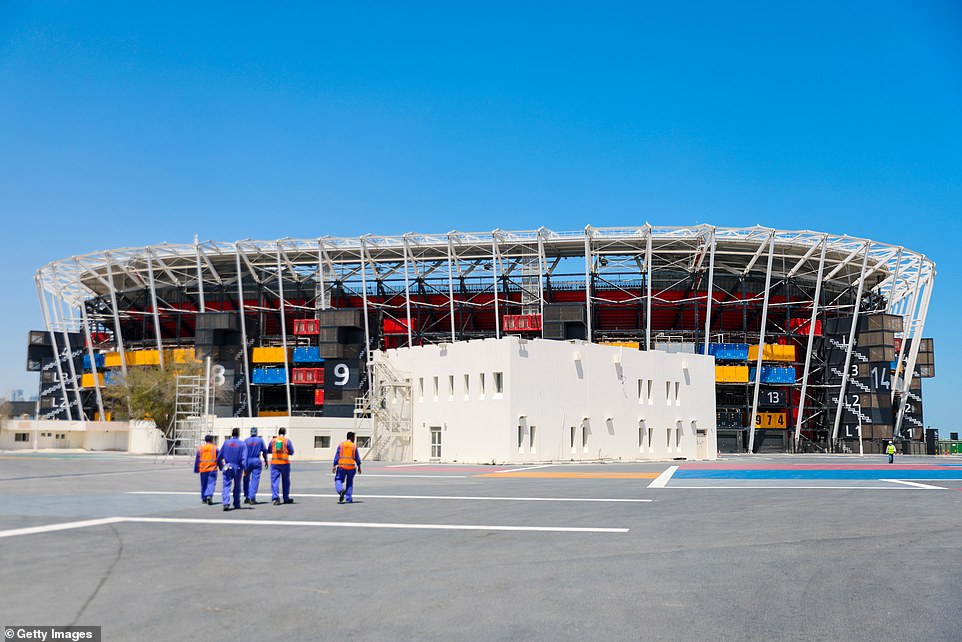 An exterior general view of the Stadium 974 as workers walk towards the stadium, a host venue for the Qatar 2022 FIFA World Cup in Doha 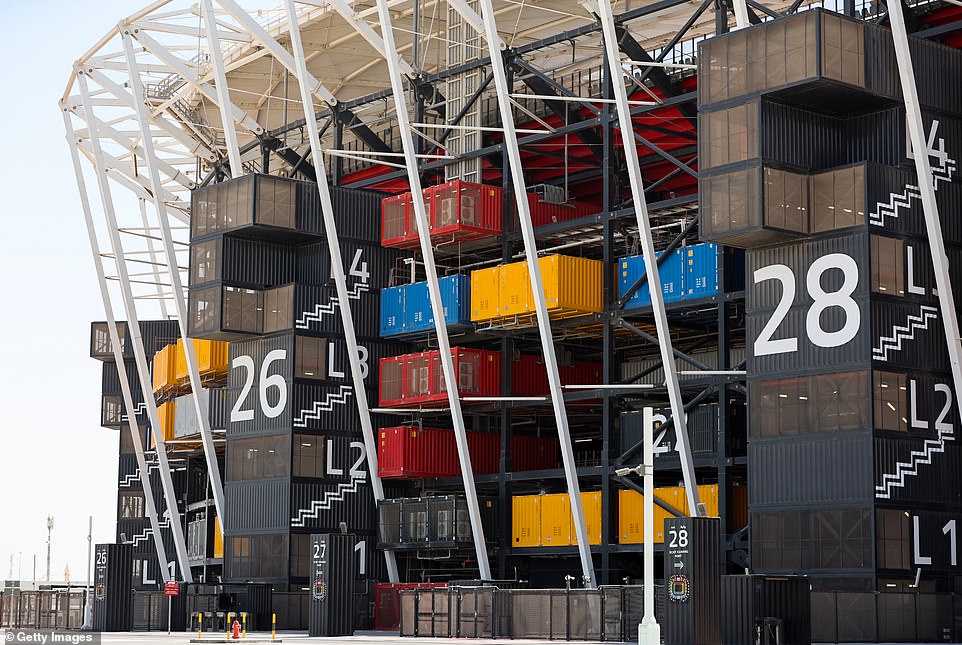 Built on the shore of the Gulf in the east of Doha, Stadium 974 is moulded out of 974 shipping containers made from recycled steel

The whole structure has been built in such a way that it can be deconstructed at any time and rebuilt in another location or refashioned into smaller venues.

Stadium 974, which shares its name with the dialing code of Qatar, will host seven matches during the tournament – six group matches and one round of 16 match.

For a more ‘inclusive’ fan experience, FIFA has also created ‘sensory viewing rooms’ in the upper echelons of three of the tournament’s eight stadiums.

Designed for fans with autism and other neuro-behavioural needs, these rooms provide a quieter atmosphere and a break from the noise and stimulation of the frenzied World Cup crowd.

They’re fitted out with equipment designed to ‘engage the senses’, such as tactile blankets, coloured mattresses and padded walls. 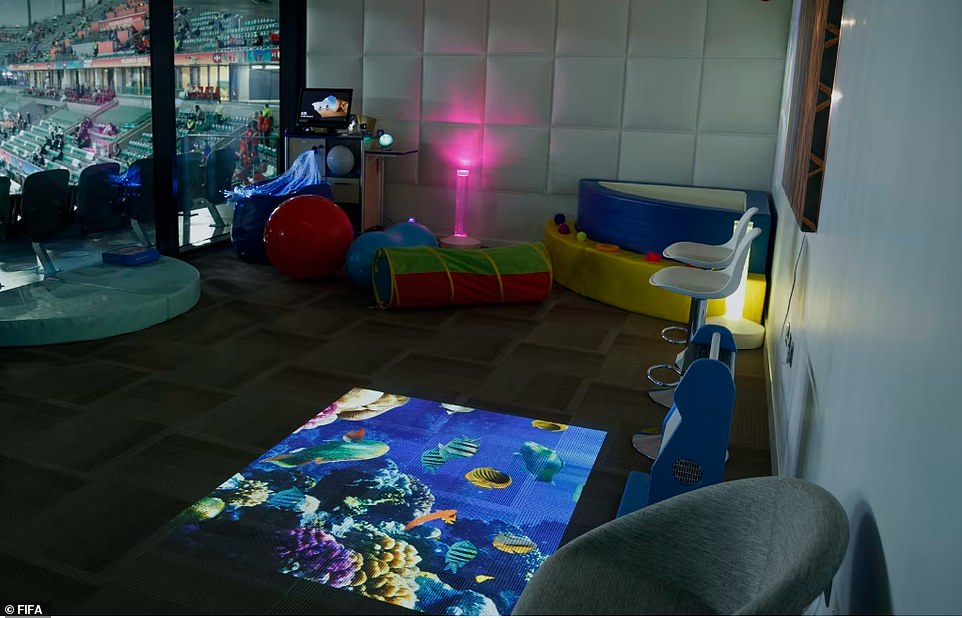 ‘Sensory viewing rooms’ in the stadiums are fitted with controlled lighting and interactive projections, as well as fibre optical and LED lamps

Officials have said the rooms provide a calm and secure environment for people with sensory access requirements.

‘We understand that large, noisy crowds may be overwhelming for some fans,’ said Khaled Al Suwaidi at Qatar’s Supreme Committee for Delivery & Legacy.

‘We feel it is important to run a facility like this for children and young people, so they can enjoy the match in a safe and calming environment.’

Around the grounds of Qatar’s stadiums are ElPalm, a type of ‘smart urban furniture’ modelled on a palm tree in the desert.

ElPalm’s big arching rooftop provides a shady spot for visitors to sit in when Qatar’s heat becomes too much to bear. 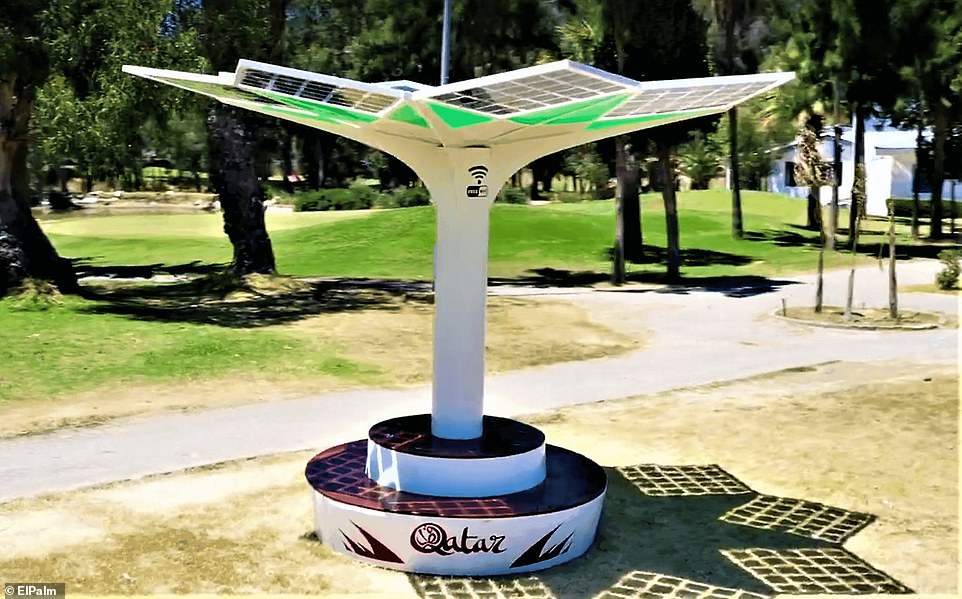 Around the grounds of Qatar’s stadiums are ElPalm, a type of ‘smart urban furniture’ modelled on a palm tree in the desert

ElPalm also creates its own power source thanks to solar panels, which in turn charge a lithium battery inside it.

This means visitors will be able to sit under ElPalm and charge their phones using a USB port or wirelessly through induction charging.

Qatar claims that all its stadiums have toilets with smart features to save as much water as possible, due to the country’s dry climate and minimal rainfall.

In the men’s toilet there are waterless urinals, which use a sealing liquid – usually a specially designed oil-based fluid – to remove urine.

The waste liquid flows down the bowl and then passes through the sealing liquid and collects in the waste pipe below. Odours are trapped below the oil layer and not in the bathroom.

There are also taps with automatic shutoff sensors, to stop water being wasted from people not turning off taps, as well as tap aerators, which add air to the water flow to reduce the amount of water passing out. 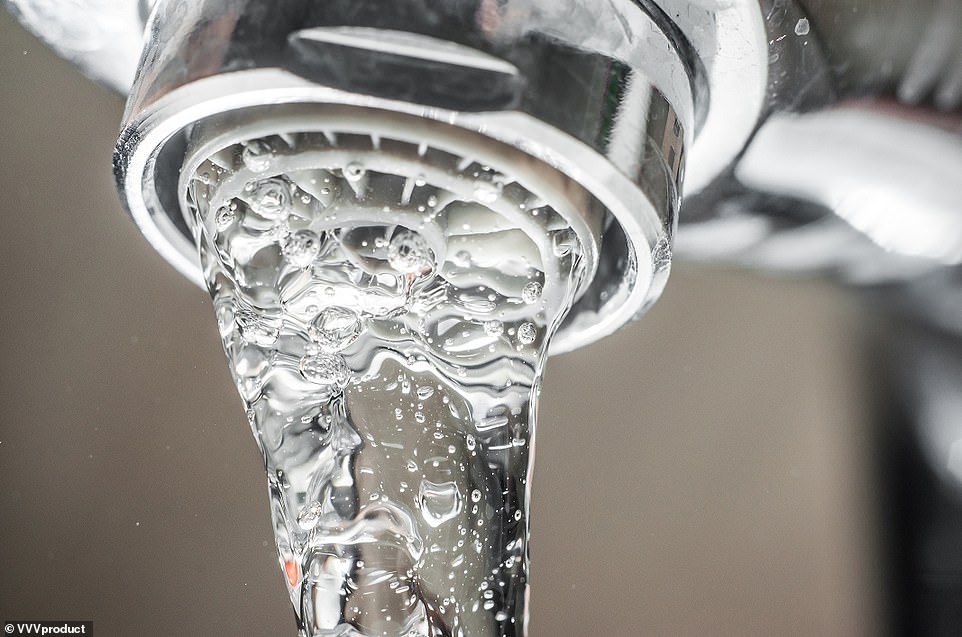 Tap aerators add air to flow of water from a tap to reduce the amount of water passing out. Qatar claims that all its stadium toilets have features that save as much water as possible, due to the country’s dry climate and minimal rainfall (file photo)

Especially for the World Cup, Qatar has purchased a fleet of 741 eco-friendly and low-carbon battery-powered electric buses from Chinese manufacturer Yutong.

Operated by Qatar public transport company Mowasalat, the fleet will ferry fans around the eight stadiums, which are located a relatively short distance from each other.

The longest distance between World Cup stadiums in Qatar is just 34 miles – equivalent to Hatfield in Hertfordshire to Sevenoaks in Kent. 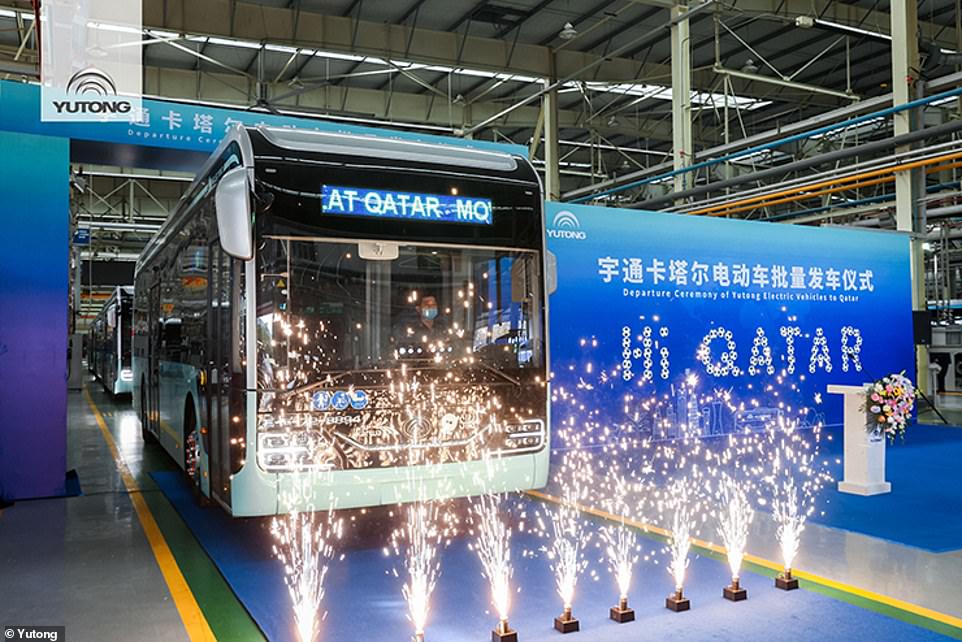 Yutong, a Chinese vehicle manufacturer based in Zhengzhou, is the exclusive supplier of electric buses for the World Cup in Qatar 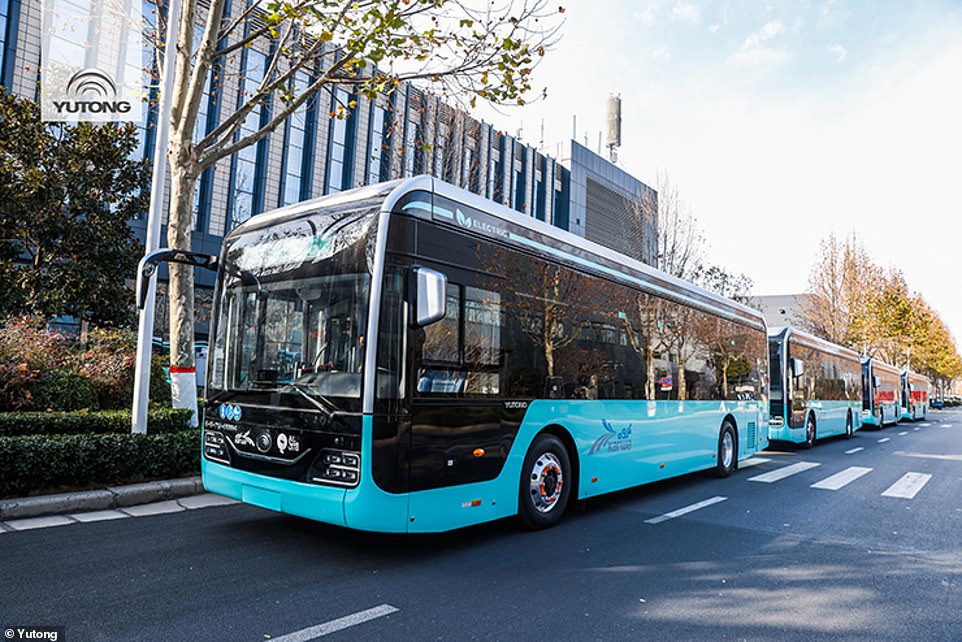 After the event, Yutong battery electric buses will continue to run on the road of Qatar to help build a green public transport system

After the event, Yutong battery electric buses will continue to run on the road of Qatar to help build a green public transport system, according to officials.

Electric vehicles are more eco-friendly than gasoline and diesel vehicles, and therefore form a part of Qatar’s efforts to hold a ‘carbon-neutral event’ – although whether it will do this has been contested.

Carbon neutrality is a state of net-zero carbon dioxide emissions – meaning any emissions are be balanced by schemes to offset an equivalent amount of greenhouse gases from the atmosphere.

FROM NFT TICKETS TO CONNECTED SCARVES: HERE’S HOW TECHNOLOGY COULD CHANGE THE PREMIER LEAGUE

MailOnline has spoken to experts to see what going to a Premier League match will be like in 20 years – and whether going to a football ground will ever be a straightforward experience again.

Ahead of the 2021-22 season kicking off, Manchester City announced it would be providing its fans with smart scarves.

The club said the ‘Connected Scarf’ will reveal just how deeply fans are impacted by the action on the field and will power ‘a more inclusive future’. 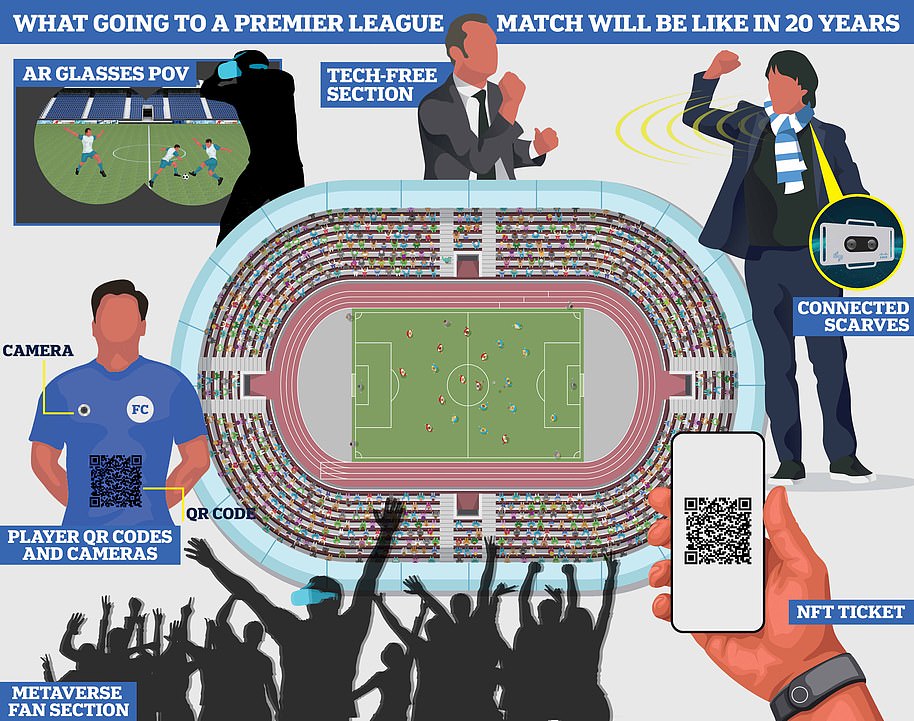 Connected scarves for fans, smart shirts for players and AR glasses: Here’s some of the ways the Premier League experience could be changed by technology

Meanwhile, Chelsea completed its rollout of 5G around its stadium this year – giving fans ‘a seamless, connected experience on match days’ from their seats.

In the near future, more new technologies could give Premier League clubs even greater access and control of fans and their data.